Meet The Ocean Sunfish, The Rhino-Sized Creature That’s The Gentle Giant Of The Sea

The enormous ocean sunfish known as the Mola mola can grow to be 5,000 pounds and 14 feet long, making it the world's largest bony fish.

The Grey family was in the middle of a relaxing fishing trip off the southwest coast of Wales when a nightmarish animal leaped out of the water. To their surprise, this behemoth that resembled a giant fish head wasn’t a freak of nature, but instead an ocean sunfish.

This enormous animal, also known as Mola mola, soared so high above their heads that they had to crane their necks to follow its trajectory. Then, it landed on their four-year-old son. “It knocked him flying!” said Vivienne Gray.

Witnessing the majestic flight of the ocean sunfish is certainly a treat. Nonetheless, a 66-pounder aerially attacking a toddler is no joke. 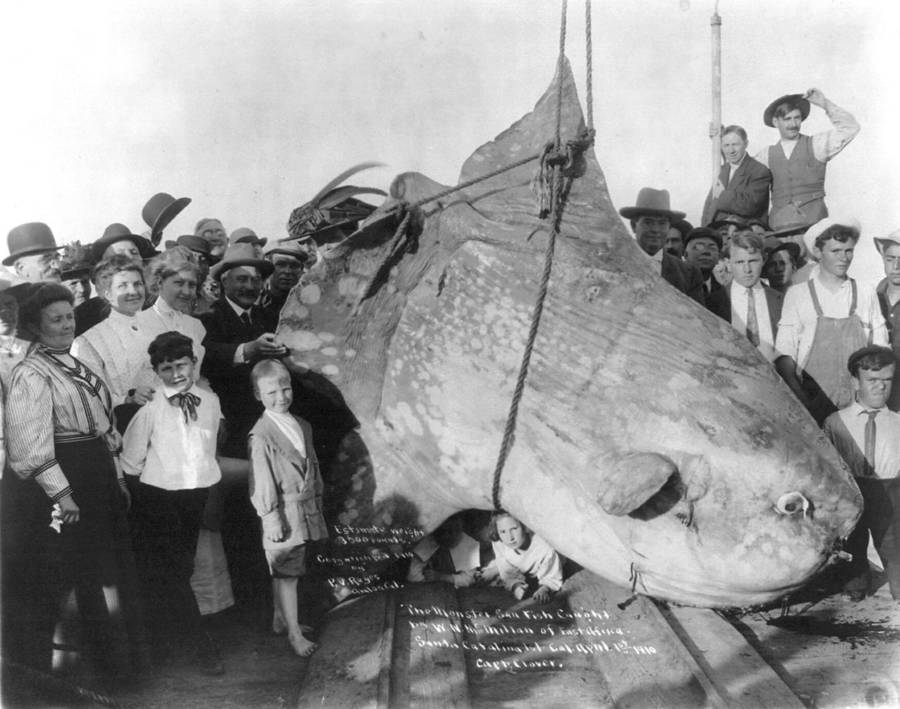 For centuries, the Mola mola’s great size and bizarre shape have made it infamous to everyone who’s encountered one, from sailors to biologists. Nevertheless, the ocean sunfish has long gone misunderstood and is in fact one of the most gentle fish in the sea.

Meet The Ocean Sunfish, The Heaviest Bony Fish On Earth

Mola means “millstone” in Latin, and aptly describes the ocean sunfish’s circular shape. Silvery in color and rough to the touch, these animals are found in tropical and temperate oceans around the globe. They’re often mistaken for sharks due to their enormous dorsal fins that peek out of the water. 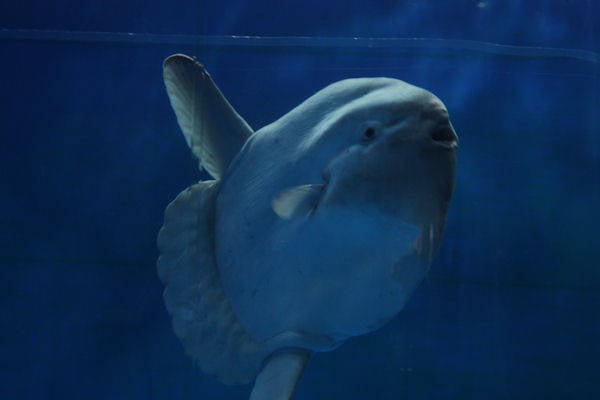 Wikimedia CommonsAn ocean sunfish in an aquarium in Japan.

The ocean sunfish that unwittingly attacked the young Grey boy was actually rather small for its species. The Mola mola is one of the heaviest fish in the world, only beaten out by a handful of sharks and the giant oceanic manta ray.

A Mola mola can weigh up to about 5,000 pounds — a whopping 2.5 tons. That’s as heavy as a rhinoceros, and a little heavier than your average automobile. On land, the weight of a sunfish could easily crush a human to death. However, viewed from the side, the ocean sunfish is as flat as a pancake.

In a beautiful display of symbiosis, seagulls eat parasites off of an ocean sunfish, which are prone to parasitic infections.

Because of their remarkable size, it’s virtually impossible to raise these animals in captivity. There are only a handful of aquariums around the world that have Mola mola on display. The ocean sunfish simply grows too fast to be managed, which the Monterey Bay Aquarium learned the hard way.

Their futile attempt to raise a Mola mola in captivity saw the fish grow to 800 pounds in 14 months, forcing the aquarium to airlift the colossal creature out of its enclosure with a helicopter. Fortunately for the fish, it was returned to its natural habitat. 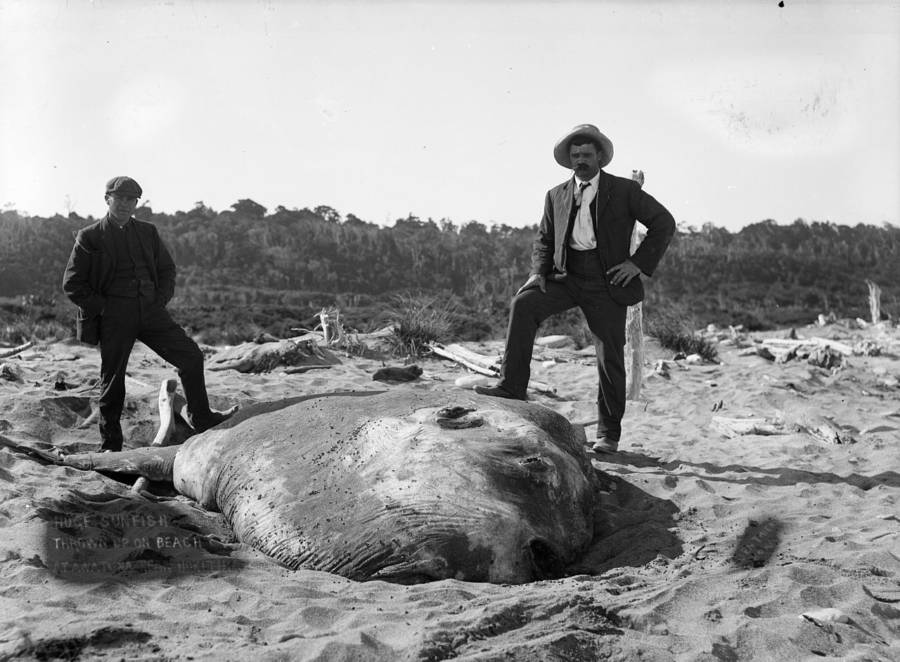 The inside of its mouth, meanwhile, hosts a roster of teeth that are fused together so thoroughly that it looks like a beak. Sadly for the ocean sunfish, this layer of teeth is so thick that it can’t close its mouth — ever — so it swims around with its mouth always open.

Sadly, this isn’t the only problem these fish face.

The Accident-Prone Existence Of The Mola Mola

The ocean sunfish has size on its side, which serves to ward off predators. While there are only a few animals that are large enough to dare attack the Mola mola, there’s another threat altogether — human beings. Tragically, we’ve officially caused them to become a vulnerable species.

Mola mola are particularly slow fish that spend much of their time near the surface. Their habit of basking in the sun garnered them their ocean sunfish name. Mola mola love to sunbathe, and regularly float to the surface to bask in the warming rays.

The ocean sunfish is one of the youngest fish species in the sea.

Unfortunately, this tendency to drift along near the surface has caused these massive fish to get annihilated by passing boats on a regular basis. As such, the species’ 10-year lifespan is often cut short by a mere appreciation of soaking up some sun.

Scientists have posited that this basking could be a method of digesting food, similar to sharks.

Plus, depending on the size of the boat that strikes them, it’s possible that crashing into one of these fish will not only harm the Mola mola but also could damage the seacraft.

“The sunfish are a large threat because they don’t move, and they are so huge that they always pose a risk,” said Sean Langman, skipper of an ocean-racing yacht that crashed into three separate sunfish in a single year. “With climactic changes, we don’t seem to be seeing as many as we used to, but they are still a threat.” 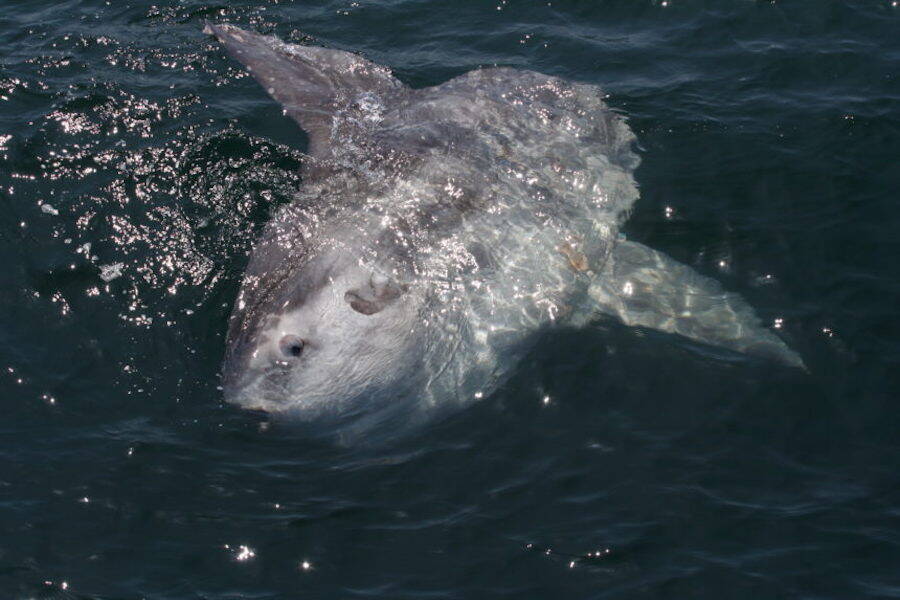 Despite being able to grow as long as 14 feet and weighing more than your Volvo, these animals are otherwise utterly harmless to humans. Their entire lives are spent in topsy-turvy swimming sessions, sunbathing breaks, and foraging for easily caught prey like jellyfish, small algae, and zooplankton.

Though they certainly have a bizarre appearance, the Mola mola look downright majestic when they choose to leap through the air. As strange as they look, witnessing their aerial artistry can be breathtaking. Fortunately, the Grey family’s encounter wasn’t a rarity, as these animals leap out quite often.

Remarkably, the Mola mola’s weight don’t impede their ability to break through the surface and catch some air. The ocean sunfish can jump as high as 10 feet. This allows it to shake off many of the parasites that plague its body — of which there are as many as 40 different species at any one time.

Threats To The Ocean Sunfish Today

Accidents aren’t the only human-related activity that plagues the Mola mola. With footage of a man who filmed himself jumping out of his boat in order to mount one of the animals publicly available, there’s no telling how common such behavior really is.

There are also cultural practices in various regions around the world that have contributed to the Mola mola fish’s decreasing population. In Japan and Taiwan, for instance, the ocean sunfish is regularly pulled into death traps for its meat — which is regionally considered a delicacy and highly valued.

On top of all that, fishermen who aren’t even hunting for the Mola mola often unwittingly catch the vulnerable species in their nets. This is so common that a stunning 29 percent of fishermen bycatch, or animals not intended to be caught, are reported to be Mola mola.

Finally, litter also poses a big threat to these giant sunbathers. Mola mola primarily feed on jellyfish, but the poor creatures now often mistake plastic bags for nutritious food. Sadly, they swallow these bags whole, which results in them choking to death. 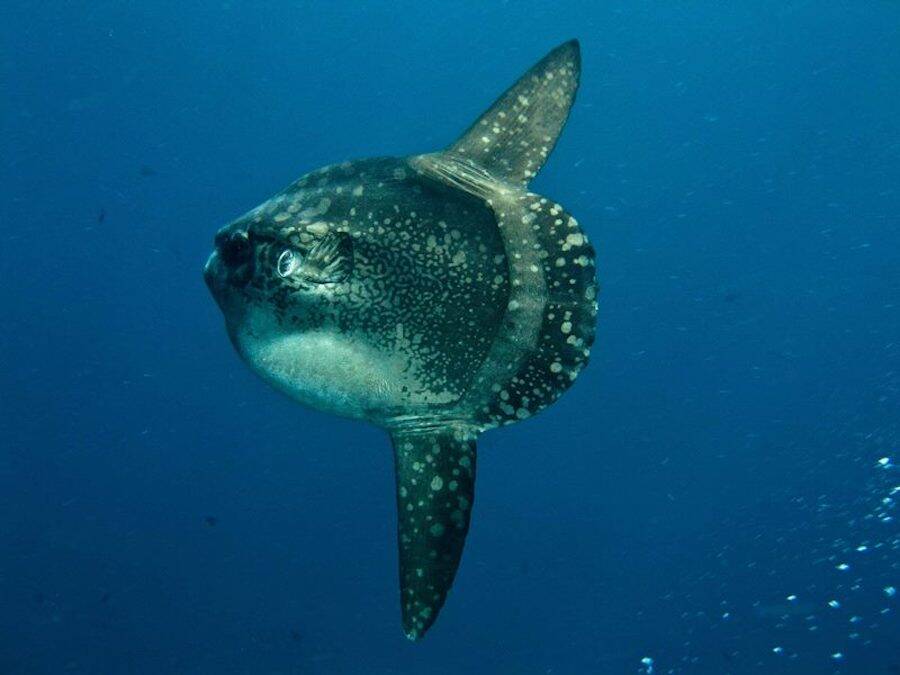 IUCNThe ocean sunfish is an officially vulnerable species due to pollution, fishing, and accidental death.

As for the man who ignorantly decided to spend his day at sea in Mexico riding a Mola mola, nature quickly struck back. The ocean sunfish hosts a varied roster of parasites on its skin, and the man’s body was covered with the critters.

Hopefully, spending hours desperately scraping them off his body taught him a lesson he still appreciates.

After this look at the bizarre ocean sunfish, learn about the Mariana snailfish, the world’s deepest fish. Then, check out this unnamed, horrible-smelling hairy creature that washed up on the shores of the Philippines.