Prada Marfa: The Texas Store Built In The Middle Of Nowhere

Ever since two artists erected Prada Marfa in the Texas desert in October 2005, this daring installation has taken on an unexpected life of its own. 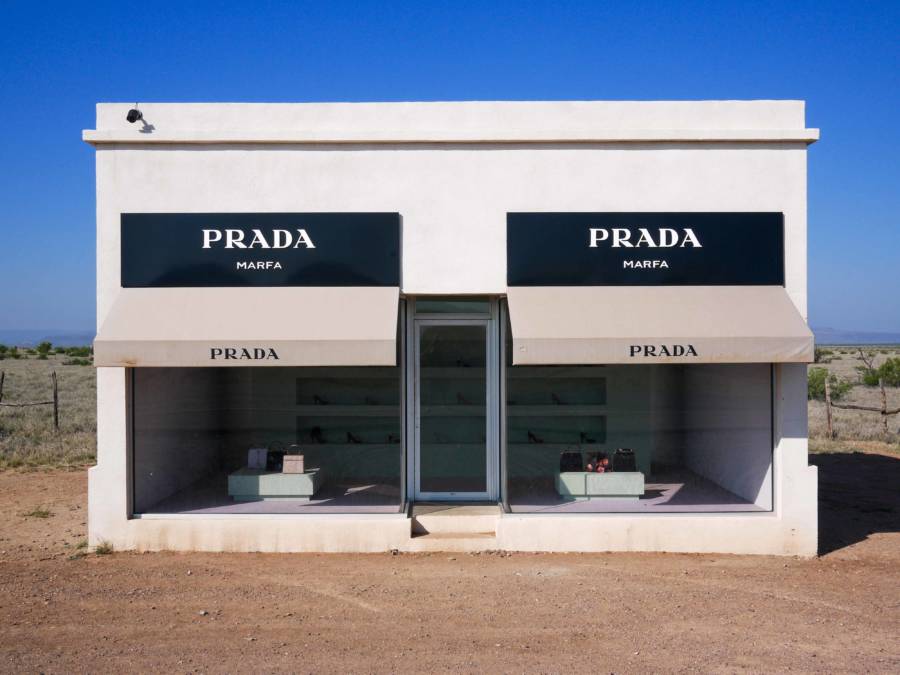 Flickr Prada Marfa is a bizarre sight to see in the middle of the Texas desert.

In October 2005, Texans near the town of Marfa noticed something strange: A Prada store in the desert. It wasn’t a mirage — but Prada Marfa was also much more than met the eye.

The store, designed by the Scandinavian artists Michael Elmgreen and Ingar Dragset, was meant to act as social commentary. The artists built Prada Marfa to critique luxury goods culture. Instead, the little Prada store in the middle of nowhere took on a life of its own.

How Prada Marfa Appeared In The Texas Desert 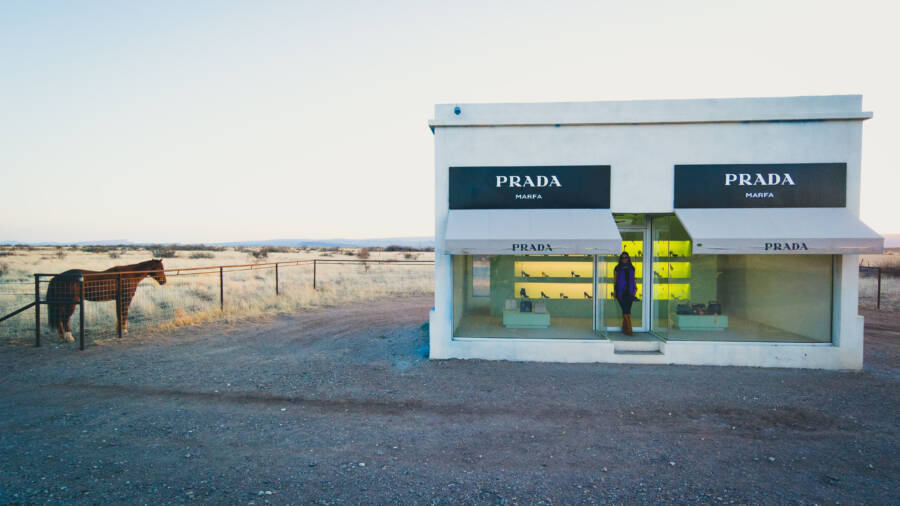 In 2005, there were no Prada stores in the entire state of Texas, not even in the big cities like Houston or Dallas.

So it came as some surprise when on October 1, 2005, a giant plaster, glass, paint, and aluminum art installation appeared on a lone stretch of land along U.S. Route 90, 26 miles outside the town of Marfa, Texas. It was a Prada store in the middle of nowhere

Elmgreen and Dragset were the creative forces behind the art installation. Their design, called Prada Marfa, was stocked with real Prada handbags and shoes from the Prada Fall/Winter 2005 collection. Miuccia Prada herself hand-selected $80,000 worth of Prada shoes and bags.

She also gave the artists permission to use the Prada name and trademark in their exhibit — which plays upon the minimalist displays of real Prada stores. At first glance, it may even look at a real store. But there is one very big difference: the exhibit has no working door.

“It was meant as a critique of the luxury goods industry, to put a shop in the middle of the desert. Prada was sympathetic to the idea of being criticized,” Elmgreen stated in an 2013 interview.

Prada Marfa is part of a broader movement of site-specific art, in which the context of where it is placed is just as important – if not more so – than the work itself.

“We really wanted to see what could happen if one would make a fusion of pop and Land art,” Elmgreen and Dragset explained. 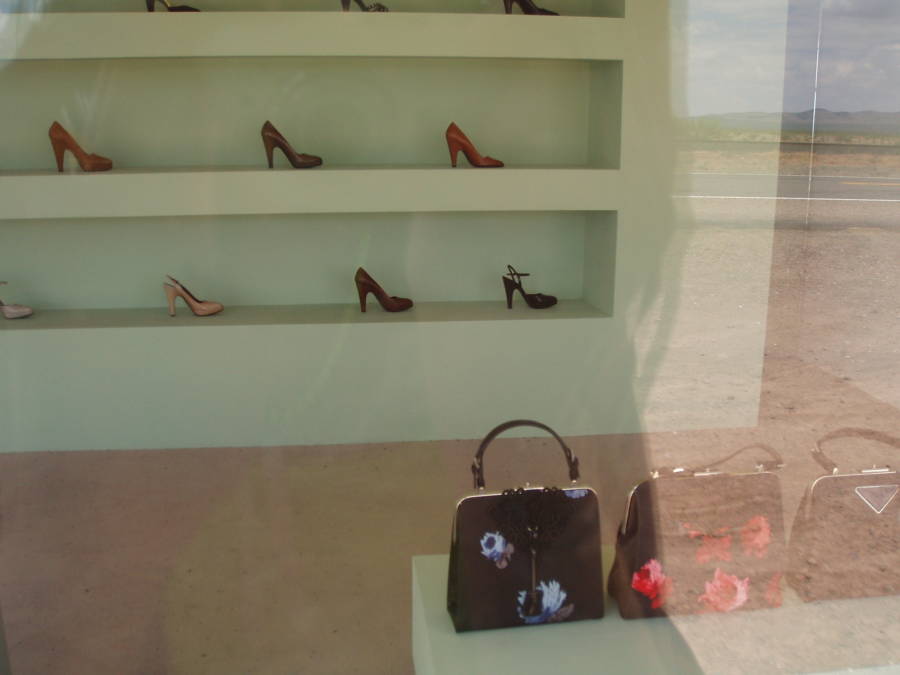 FlickrHandbags and shoes viewed through the window of Prada Marfa.

In other words, Prada Marfa’s location in the middle of the desert in Texas is part of its artistic significance. Made of a biodegradable adobe, the artists believed that their structure would eventually melt into the Texan landscape. They wanted to make a statement about the impermeability of fashion and offer a critique toward consumerist culture.

But not everything would go according to plan for the Prada store in the desert.

The Public Reaction To The Fake Boutique In The Desert 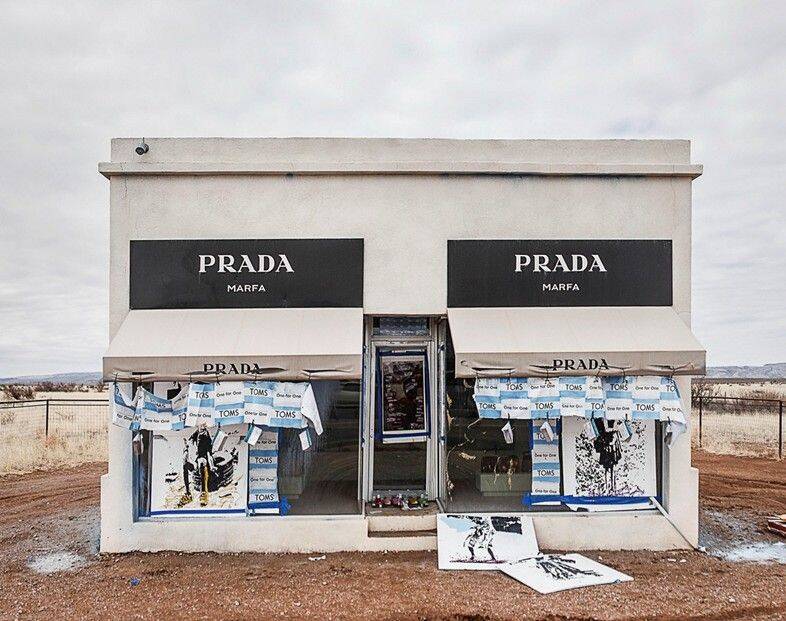 PinterestThe store has been hit by vandals a number of times.

Prada Marfa went rogue from the beginning. On the night the exhibit was installed, vandals broke in and stole the expensive handbags and shoes.

Thus, despite their original intent, Elmgreen and Dragset were forced to repair the damage and replace the stolen goods with more Prada items. They also added security monitors to the bags, and removed all the left-foot shoes.

That didn’t entirely stop vandals. In March of 2014, it was attacked again. Although nothing was stolen, the entire structure was painted blue, fake TOMS advertisements were hung on the outside, and a manifesto was plastered onto the walls outside with a bizarre message:

“TOMS Marfa will bring greater inspiration to consumer Americans to give all they have to developing nations that suffer disease starvation and corruption … So long as you buy TOMS shoes, and endorse Jesus Christ as your savior, welcoming the ‘white’ him into your heart. So help you God, otherwise, youre damned to hell … Welcome to your Apocalypse?”

Police eventually arrested a 32-year old artist named Joe Magnano in connection with the vandalism, and he was found guilty and forced to pay a $1,000 fine and $10,700 in restitution to Prada Marfa. Once again, the artists were forced to repaint and repair the installation. 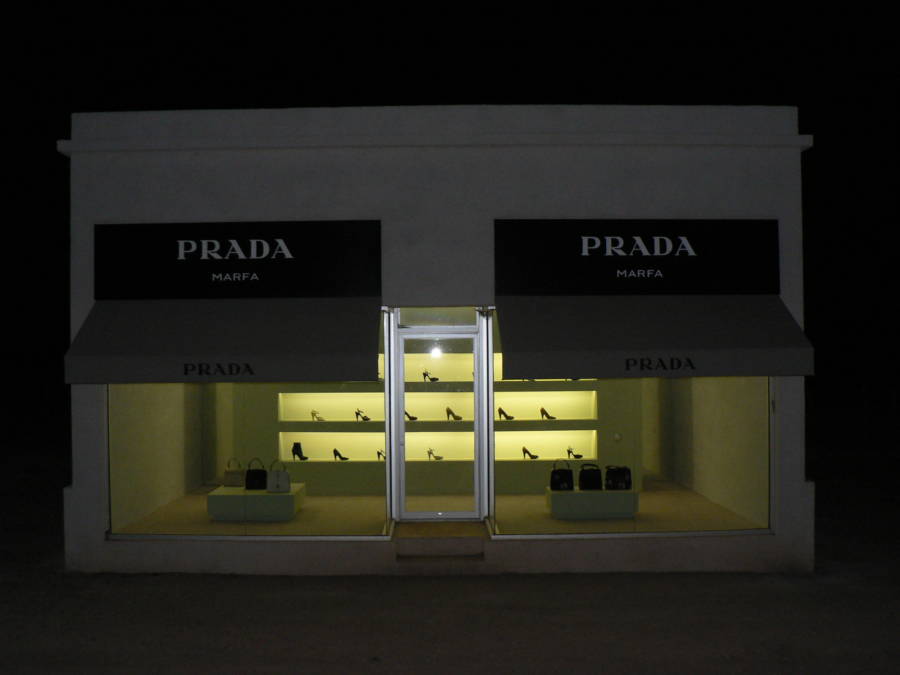 FlickrPrada Marfa glowing into the desert at night.

The Legacy Of Prada Marfa Today 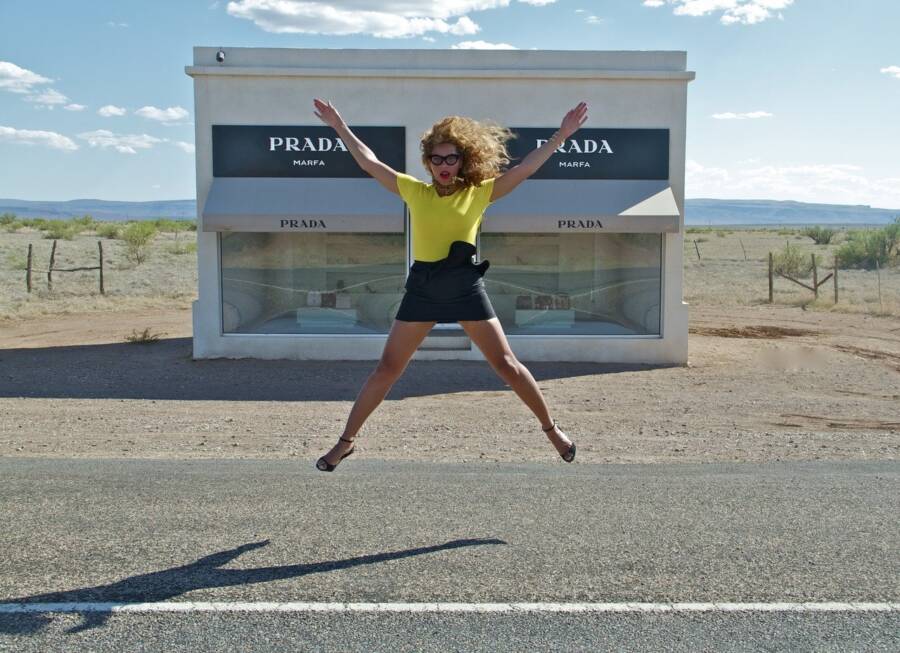 TwitterBeyonce was one of the thousands of tourists who visited the Prada store in the middle of nowhere.

Today, the Prada Marfa still stands — much to the surprise of its original artists.

Dragset recalled that they expected the installation to “exist more as documentation and a rumor, and at some point just disappear.”

Instead, the opposite has happened. The Prada Marfa has become an unlikely landmark in Texas. And its oddity has made it a social media star in its own right.

Although Dragset and Elmgreen had designed the installation as a critique of luxury goods and consumer culture, they acknowledge that the purpose of their creation has changed. Now, Dragset says, Prada Marfa demonstrates: “how we use technology to perceive a site or an experience.” Social media — and selfies — boomed in the years after Prada Marfa’s 2005 installation.

“Nothing is worth anything unless you have your face in front of it,” Dragset noted.

Indeed, thousands of people flock to Prada Marfa each year to take a picture. Even Beyonce snapped a photo in front of the site, leading one fashion blogger to quip: “Always dreamed about heading down to Marfa, Texas, and posing outside the famous Prada ‘store,’ à la Beyoncé?”

In addition, the artists’ very concept — that the building would eventually fade into the desert — has been abandoned. Two commissioning art organizations, Ballroom Marfa and Art Production Fund, provide undisclosed sums to maintain the Prada store in the middle of nowhere.

“All parties realized that if the structure were allowed to fully decay, it would become both a hazard and an eyesore,” notes Ballroom Marfa’s website.

But the artists are still somewhat stunned by the direction that their Prada store in the desert took.

“It’s almost like being a parent who experienced children growing up and going a direction they never intended,” Elmgreen said. He and Dragset returned to the site in 2019, a full 14 years after its original installation, and were surprised by what they found.

Indeed, rather than fade into the landscape, Prada Marfa remains a curiosity in the Texas desert — one that may just stand the test of time.

After learning about Prada Marfa, the store in the middle of nowhere, read about Point Nemo, the most remote place on planet Earth. Then, check out some of the most unbelievable 1990s fashion trends.