Discovered by mere chance, the fossilized creature is the largest millipede ever found — and would have grown to weigh 110 pounds with a body spanning nine feet. 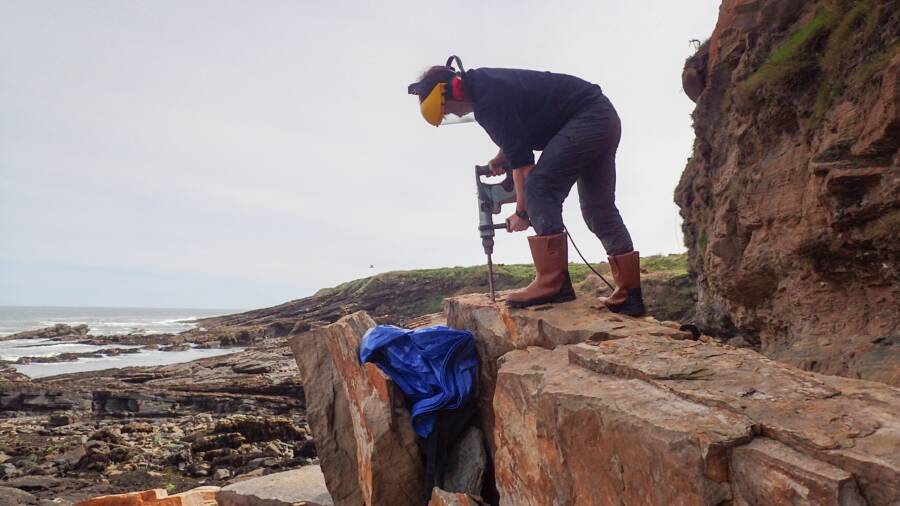 For those afraid of creepy crawlers, the Carboniferous Era would’ve been overwhelming. About 100 million years before the dinosaurs, that period of time saw giant millipedes spanning up to nine feet roam around Earth. At least, that’s what prehistoric evidence in form of a fossil just yielded in Northumberland, England.

While the car-sized millipede was excavated in 2018, research pn it has only just concluded. Published in the Journal of the Geological Society on Dec. 20, 2021, the study revealed this fossilized Arthropleura specimen would’ve weighed 110 pounds — and is thus officially the largest-known invertebrate ever found.

According to Science Alert, these enormous creatures lived between 299 and 359 million years ago. While experts have long known of their existence, this particular fossil retained an exoskeleton — which confirmed their previously unknown size for the first time. For lead author Neil Davies, however, much is left to learn.

“Finding these giant millipede fossils is rare, because once they died, their bodies tend to disarticulate, so it’s likely that the fossil is a molted carapace that the animal shed as it grew,” said Davies. “We have not yet found a fossilized head, so it’s difficult to know everything about them.” 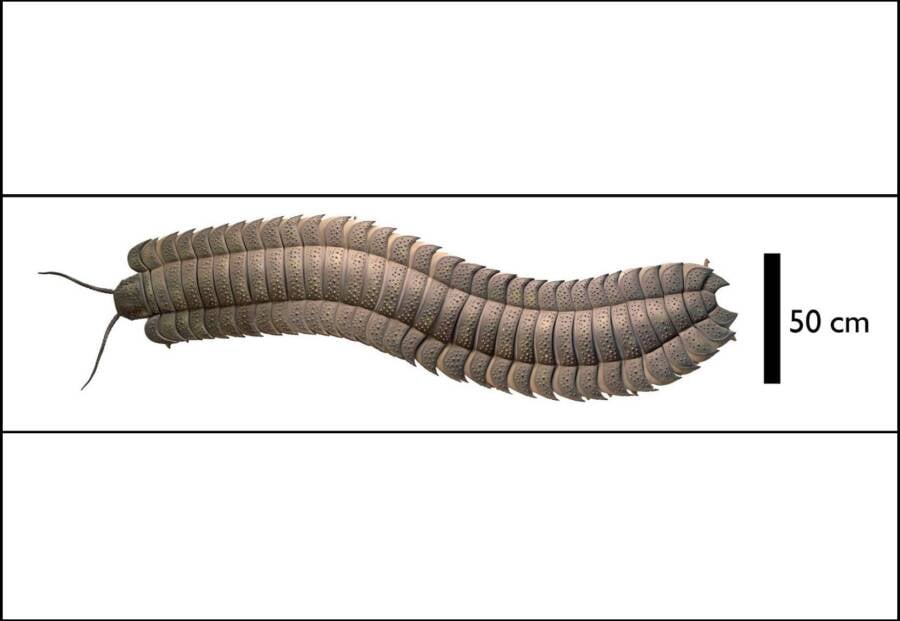 According to LiveScience, the only other two known Arthropleura specimens were far smaller and found in Germany. Thought to have preferred swamplands, they clearly inhabited woodlands as found in Northumberland, too.

“It was a complete fluke of a discovery,” said Davies. “The way the boulder had fallen, it had cracked open and perfectly exposed the fossil, which one of our former PhD students happened to spot when walking by. It was an incredibly exciting find, but the fossil is so large it took four of us to carry it up the cliff face.”

The boulder in reference was a fragmented block of sandstone sitting idly on a beach. Davies said he and his colleagues were “very lucky” to find it because the area “is not a place known for fossils.” Furthermore, the fact that it had fallen from a cliff and cracked to reveal its contents left researchers in awe.

That boulder held a perfectly preserved exoskeleton — rare for the shed material, which typically breaks down long before it has a chance to fossilize. And in contrast to the other Athropleura fossils found in Germany, this is by far the largest. 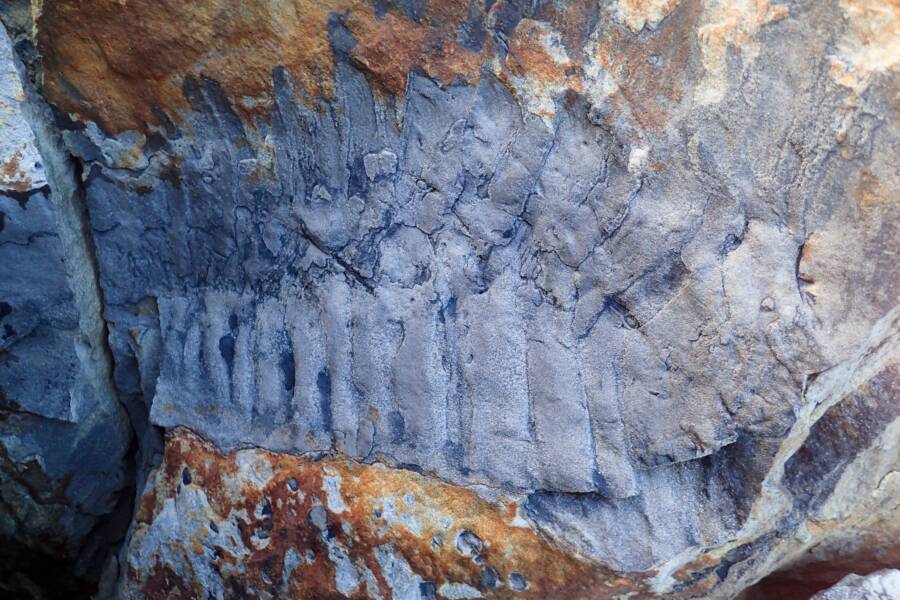 Neil Davies et al.The visible segments of this fossil suggested the specimen had at least 20 legs.

“It seems to have filled with sand soon after it was molted,” said Davies. “It is in a fossilized river channel, so it likely fell into a small river and got entombed in other sediment very quickly … Smaller examples have a common width: length ratio of 4.78. So, as our animal was definitely 55 cm wide, that makes it 2.63 m long.”

“These would have been the biggest animals on land in the Carboniferous.”

Prior to the discovery of this exoskeleton, most everything researchers knew about the species was rooted in fossilized footprints. Their colossal size was often explained by increased atmospheric oxygen levels of the time, but the experts have since realized this was not the primary factor.

While the creature thrives during the Carboniferous Period when the concentration of oxygen in the atmosphere was 23 percent, that was a mere two percent higher than today’s 21. Davies has also pointed to the arthropods’ diet and guessed that they may have been able to fight their way to the choicest foods.

“While we can’t know for sure what they ate, there were plenty of nutritious nuts and seeds available in the leaf litter at the time, and they may even have been predators that fed off other invertebrates and even small vertebrates such as amphibians,” he said. ” 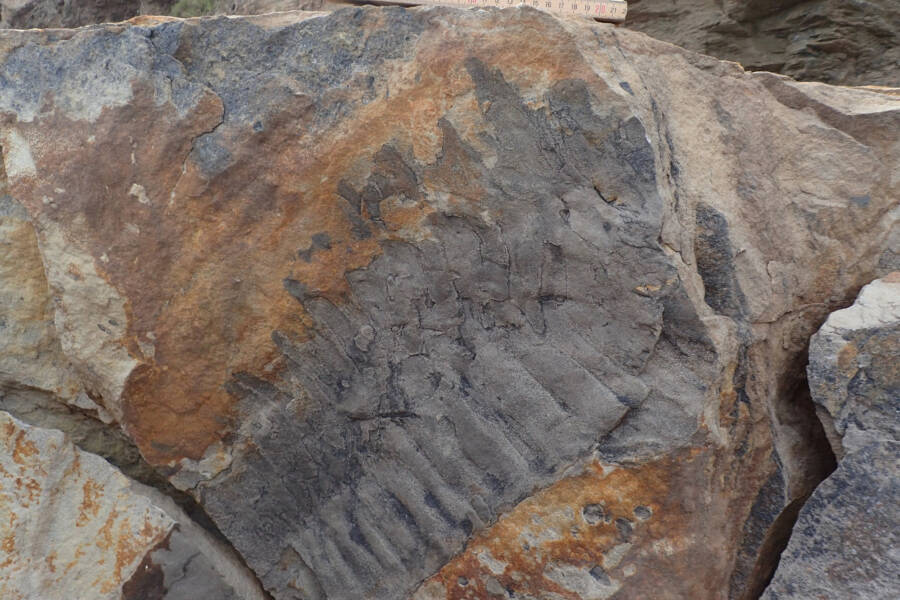 This particular fossil suggests it had at least 20. The species thrived for 45 million years before the rise of reptiles during the Permian Period spurred their extinction.

After reading about the giant millipede, learn about the Argentinian farmer who found car-sized armadillo fossils. The, read about the 27,000-year-old giant sloth that was 13 feet tall.