Octopuses are weird looking. But that's not the only reason these 33 scientists believe they came from outer space. 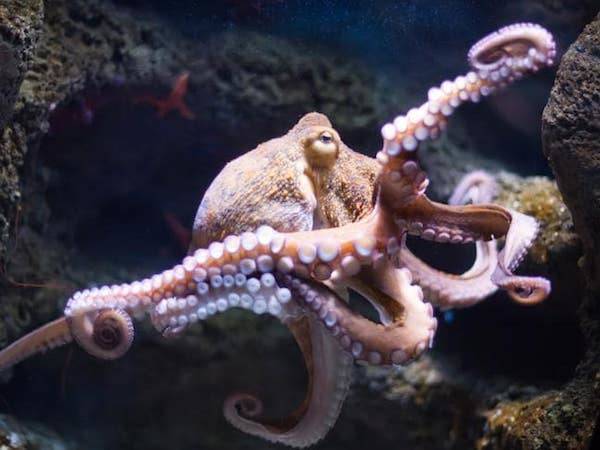 istockOctopuses evolve in a way no other organisms do.

Octopuses do something that no other organism does: they edit their own bodies. In evolution, genetic mutations cause DNA to change in a way that’s beneficial to the host. Octopuses routinely edit their RNA to adapt to their environments.

Octopuses’ weirdness was enough for 33 scientists from respected institutions to follow a different train of thought. In an extensive study, summarizing decades of research, and published in the peer-reviewed journal Progress in Biophysics and Molecular Biology, these scientists say the advanced biology of octopuses isn’t an enigma. Instead, it says octopuses came from outer space.

Suggesting that octopuses arrived about 270 million years ago, the paper used the finding that “The genome of the Octopus shows a staggering level of complexity with 33,000 protein-coding genes more than is present in Homo sapiens” from a previous study as a basis.

Regarding Octopuses’ complex genome, the scientists said, “It is plausible then to suggest they seem to be borrowed from a far distant ‘future’ in terms of terrestrial evolution, or more realistically from the cosmos at large.” And that, “One plausible explanation, in our view, is that the new genes are likely new extraterrestrial imports to Earth.”

Octopuses’ features, which are alien-like in their description, push the theory as well. They have eyes with camera-like adaptability, sophisticated camouflage capabilities, and very flexible mobility. They have three hearts, can regenerate limbs, and grasp things with their tentacles.

The study also points to an already existing theory, called panspermia. It’s the idea that life on earth came from out there — microorganisms (like seeds) in space that carry codes for life were scattered on earth once it was inhabitable.

The study said, “It takes little imagination to consider that the pre-Cambrian mass extinction event(s) was correlated with the impact of a giant life-bearing comet (or comets), and the subsequent seeding of Earth with new cosmic-derived cellular organisms and viral genes.”

Basically, the comet which caused animals to go extinct also carried with it microorganisms that gave life to tons of new critters.

If you extend your imagination in that direction, the authors think it’s plausible that cryopreserved eggs able to create octopuses could have arrived on a similar comet.

The study refers to a recent Rosetta mission to Comet 67P that found, inside the frozen ice, organic molecules that form the basis of sugars and amino acids.

Though it’s not life, the materials are still the building blocks of DNA.

“If you think that our position here is farfetched, or even alarmist, we quote the late great Cornell Professor, Thomas Gold, a farsighted and creative astronomer and geophysicist,” the authors say. They quote Gold’s comments on Alfred Wegner’s 1912 theory of Continental Drift:

“What does the refereeing procedure really look like? How does it really go on?

If, for example, an application was made in the early 60s or late 50s suggesting that the person wanted to investigate the possibility that continents are moving around a little, it would have been ruled out absolutely instantly without questions.

That was crack-pot stuff, and had long been thought dead. Wegener, of course, was an absolute crack-pot, and everybody knew that and you wouldn’t have any chance.”

“Six years later you could not get a paper published that doubted continental drift,” the authors said.