Known only as "Tsukumo No. 24," the prehistoric skeleton bore 790 deep wounds, which scientists are attributing to a tiger or white shark. 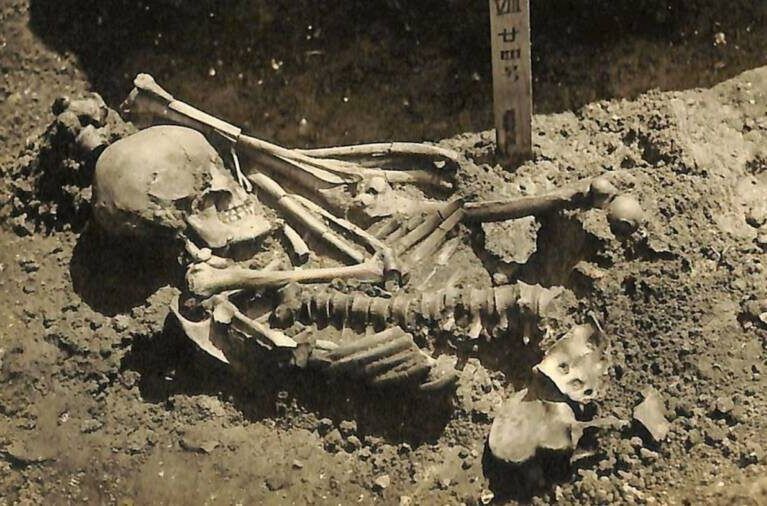 Kyoto University“Tsukumo No. 24” was found buried at a cemetery near the Seto Inland Sea of the Japanese archipelago.

While the University of Oxford team primarily intended on studying human violence in prehistoric Japan, one 3,000-year-old skeleton took them elsewhere. First unearthed in the early 1900s, the remains contained almost 800 cuts that left the experts baffled — until they realized this was the oldest shark attack victim ever found.

Recovered from the Tsukumo Shell-mound archaeological site near the Seto Inland Sea, the man had been buried in a cemetery like any other. He had clearly met a distinctly gruesome end, however, while a cause of death was never established. Oxford archaeologists Rick Schulting and J. Alyssa White hoped to find one.

One of the most revealing clues was that none of the wounds had shown any signs of healing, according to Science Alert — indicating that they had been fatal. The notion that another person knifed him nearly 800 times, however, seemed ludicrous.

“We were initially flummoxed by what could have caused at least 790 deep, serrated injuries to this man,” the study published in the Journal of Archaeological Science: Reports said. “There were so many injuries and yet he was buried in the community burial ground, the Tsukumo Shell-mound cemetery site.”

Experts ruled out human conflict, land-based predators, and any of the metal tools used by the Jōmon culture from that era. According to CNN, radiocarbon analysis of the bones and 3D scans allowed the team to reconstruct what happened — namely a horrifying encounter with multiple sharks. 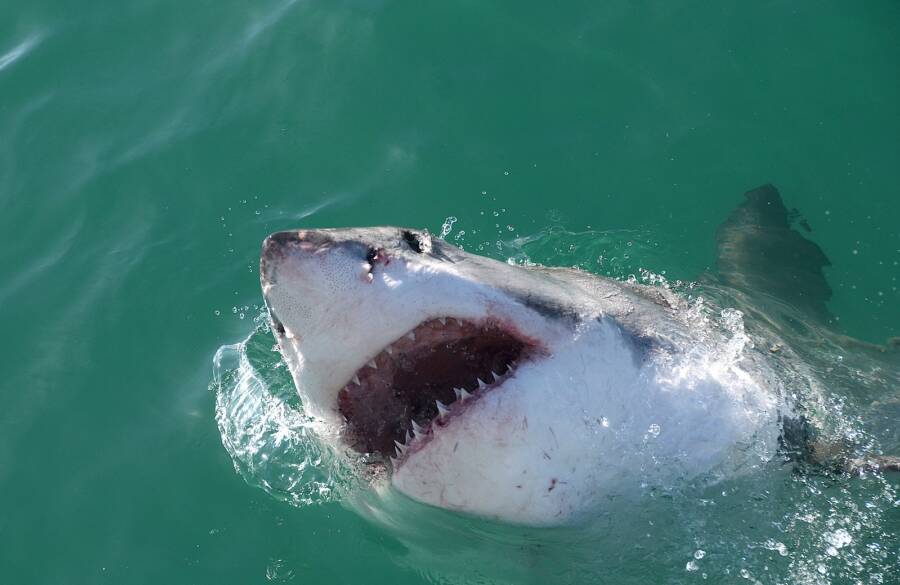 Wikimedia CommonsThe experts are confident the nearly 800 wounds came from a tiger shark or great white shark (seen here) — and perhaps more than one.

While Schulting and White managed to rule out various probabilities, they were in uncharted territory. The team had been trying to research human violence in prehistoric Japan, after all, and had now found themselves deciphering an animal attack. On top of that, fatal shark encounters were rare.

“There are very few known examples of shark attacks in the archaeological record,” explained Schulting. “The main reason that so few cases are known is simply because they were so rare. Even today, with so many more people in the world, only a handful of lethal shark attacks occur each year.”

Head of the Florida Program for Shark Research, George Burgess, helped the team comb through a litany of forensic shark attack cases for comparison. The earliest documented example they found dated to around 1000 A.D. in Puerto Rico, while a reconstruction of this case indicated tiger or white sharks were the culprits.

“Given the injuries, he was clearly the victim of a shark attack,” said Schulting.

In perhaps the most fascinating phase of the entire study, the experts conducted a radiocarbon analysis of the man’s skeleton and mapped his lesions onto a 3D model to analyze his wounds. This stage revealed the man had died between 1370 and 1010 B.C., while his wounds indicated he was alive during the attack. 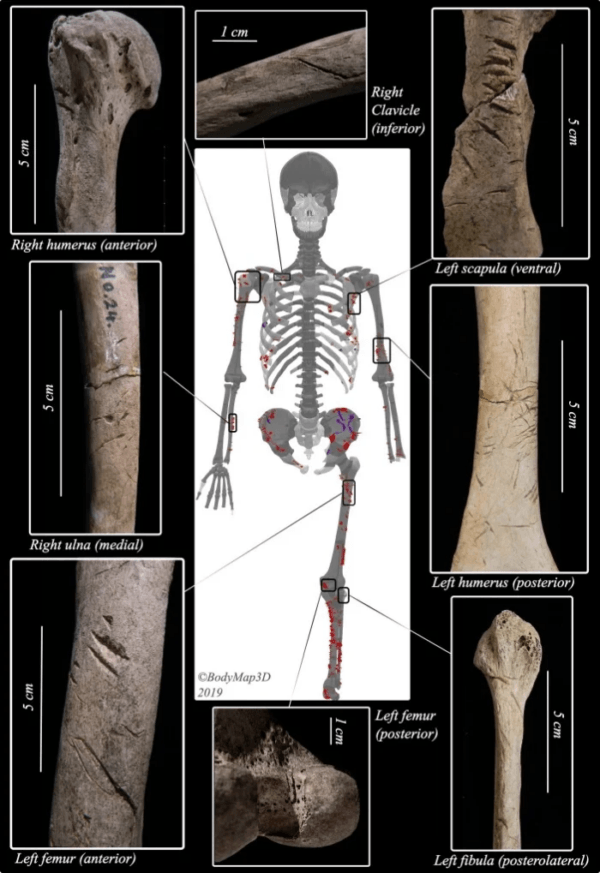 Most disturbing of all was that the victim’s left hand was gone. He presumably lost it during his final moments, while trying to thwart the ferocious predator from devouring him. Schulting said that there were “so many tooth marks all over the skeleton” that the horrifying incident probably lasted “for some time.”

“We suspect that the man was probably out fishing with some companions in the Inland Seto Sea in southern Japan,” said Schulting. “They could have been fishing from a boat, or diving for shellfish. Perhaps they were even hunting sharks, as shark teeth are sometimes found in Jōmon archaeological sites.

“One or more sharks — we suspect one but can’t be certain about that — attacked the man either while he was already in the water, or perhaps he lost his balance and fell, or was pulled overboard if the shark was on a fishing line — this would not have been a small shark.”

In the end, those who witnessed the man being eaten took him ashore as soon as the violence ceased and buried him in their local cemetery. 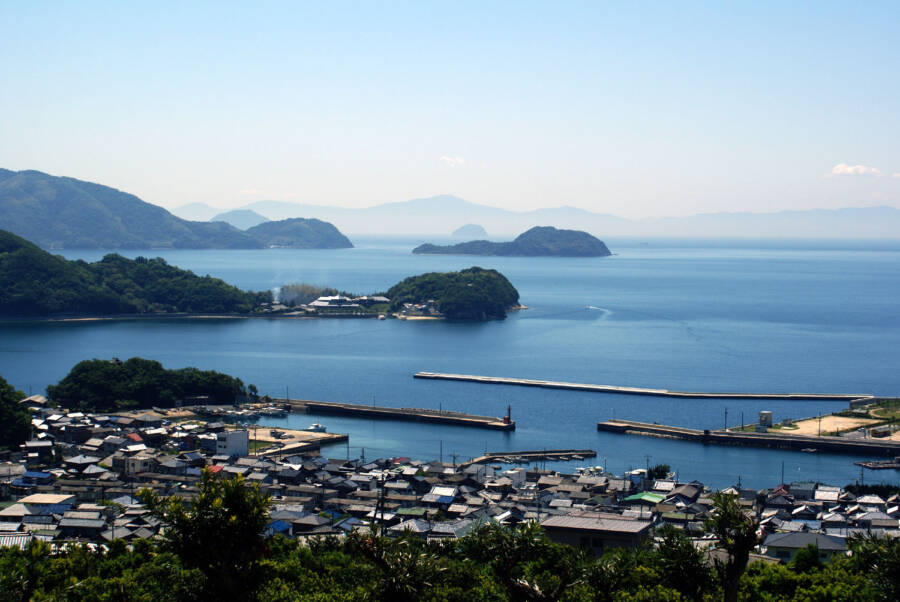 In the end, the sheer number of bites and their overlapping placement made it impossible to precisely identify the species that killed the man in question. Simply dubbed “Tsukumo No. 24,” the remains have given archaeologists invaluable new insight into the dangers of prehistoric hunter-gatherer life, however.

“The attack on Tsukumo No. 24 highlights the risks of marine fishing and shellfish diving or, perhaps, the risks of opportunistic hunting of sharks drawn to blood while fishing,” the study said. “Humans have a long, shared history with sharks, and this is one of the relatively rare instances when humans were on their menu and not the reverse.”

After reading about the oldest shark attack victim, learn about the gruesome shark attacks of 1916. Then, read about the Japanese burial ground with 1,500 bodies found in Osaka.