Though the golden snub-nosed monkey has become beloved for its adorable blue face and elegant fur, these threatened primates are disappearing due to poachers and deforestation. 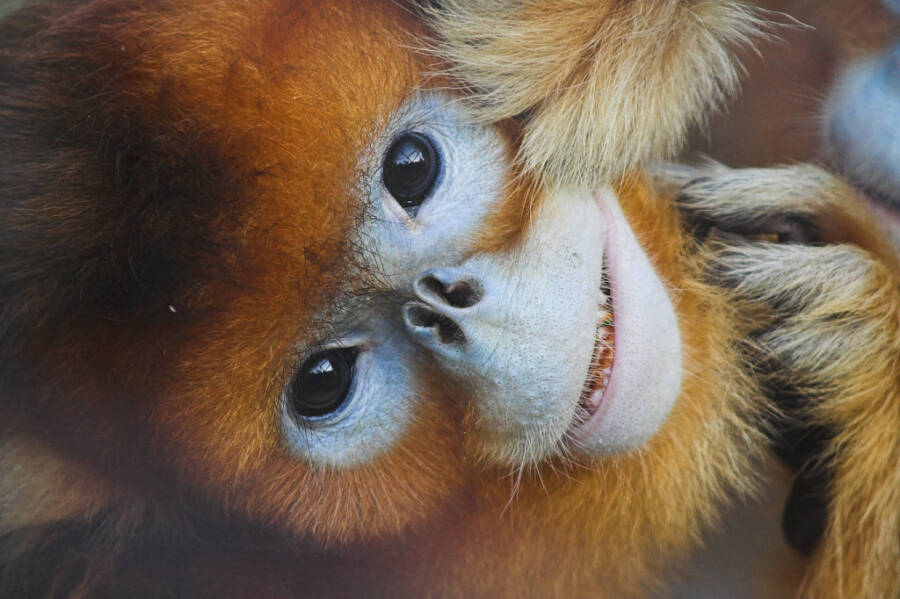 The golden snub-nosed monkey is the type of animal almost too cute to be real. But they do exist — and are increasingly endangered.

Golden snub-nosed monkey populations plummeted by more than half in the last 40 years. Native to the mountainous forests of southwestern China, they are embattled by deforestation and hunters profiting from their pelts and were classified as “Endangered” by the International Union for Conservation of Nature in 2015.

Among primates, golden snub-nosed monkeys exhibit some of the most unique behavioral characteristics. They are known to make 18 varying kinds of vocalizations, from joy and amazement to warnings and alarm. And females have even been known to nurse the young of others.

Moreover, their endangerment threatens a delicate ecosystem — their diet and resulting seed dispersal revitalizes the very forests where they live.
Now, experts estimate only 8,000 to 15,000 remain in the wild. Learn more about these remarkable creatures.

Where Does The Golden Snub-Nosed Monkey Live?

Those eager to see a golden snub-nosed monkey (Rhinopithecus roxellana) in its natural habitat need to visit the mountain ranges that form the eastern edge of the Tibetan Plateau. Winter temperatures in this region bottom out at 17 degrees Fahrenheit, and these resourceful monkeys are one of the few primate species capable of surviving them. 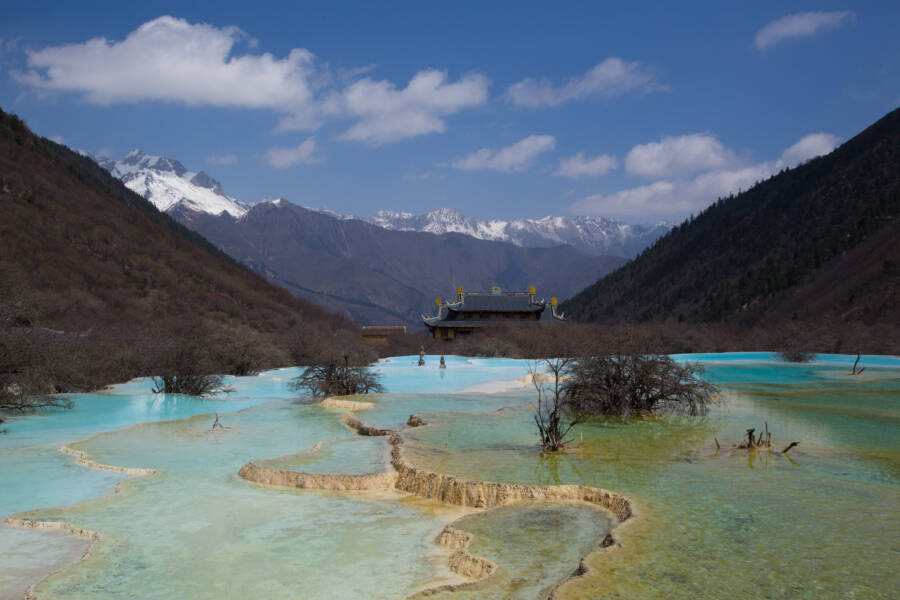 Flickr/Jean Marie-HullotThe UNESCO World Heritage Site of Huanglong, one of the Tibetan Plateau areas home to the endangered monkey species.

Survival here is tough, with snow covering the animal’s habitat for about four months per year. Nonetheless, this blue face monkey isn’t alone. It cohabitates the area with other furry companions like the giant panda. And during the coldest months, the clever primate knows to descend to lower altitudes.

Their diet that varies season to season. It consists mainly of flowers, tree bark, fatty seeds, fruit, pines, and leaves in the summer. In the winter, these highly selective eaters prefer a diet of lichen from dead trees.

They are also highly social. Each day around noon, these monkeys take a “siesta” to eat, groom, and play. At night, they cuddle together to sleep in large groups in order to help withstand the cold.

These Primates Have A Unique Family Life Adapted For Predators

Male golden snub-nosed monkeys are typically polygamous to four females and commonly found in groups mirroring that proportion to protect the family unit’s offspring. During the day, the young bandy about the forests while adults nap. Males forage in the morning and afternoons, and females tend to remain in the trees. 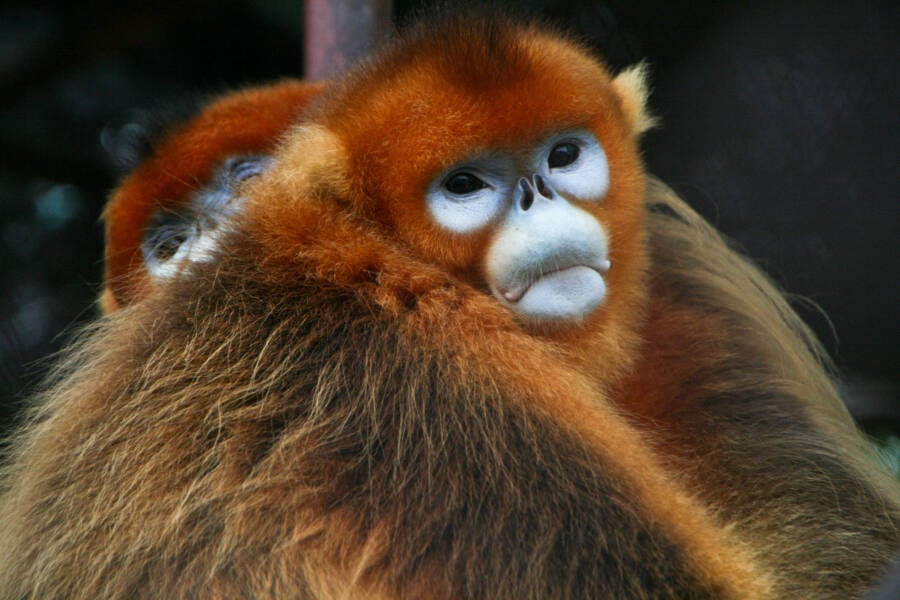 Flickr/Jack HynesMales have growths on the corners of their mouths connoting sexual maturity.

However, seasonal threats from predators such as wolves, golden eagles, and northern goshawk raptors force the species to unite into larger clusters during the summer.

In winter, they typically stay in groups of around 20 to 30. And the blue face monkey has a nose that is perfectly snubbed to protect from frostbite.

In the summer, groups can skyrocket to upwards of 200 as wild dangers surge. Scientists have even recorded combinations of groups that can number up to 600. Males are known to stay in the front and back of these groups, huddling together when danger arrives.

Researchers have observed golden snub-nosed monkeys make 18 different types of vocalizations, which they make without moving their face or body. Physical demonstrations are certainly imperative when a predator arrives, though scientists have also observed vocalizations during moments of enjoyment.

Uniquely, although males evolved to have multiple mates, the female typically initiates this process. Females do this either by using eye contact and running off, or lying down with her legs curled up.

Pregnancy lasts about seven months and yields one offspring, with mothers nursing their young for three weeks. Weaning ends after a year. Males are forced out of the family at age three to find a new group to mate with. Female offspring stay forever.

Remarkably, according to a study published in 2019, researchers observed more than 87 percent of infants being nursed by mothers other than their own over a five-year period, suggesting deep communal ties. It is the first documented case of so-called allonursing found in Old World monkeys.

Why Is The Golden Snub-Nosed Monkey Endangered? 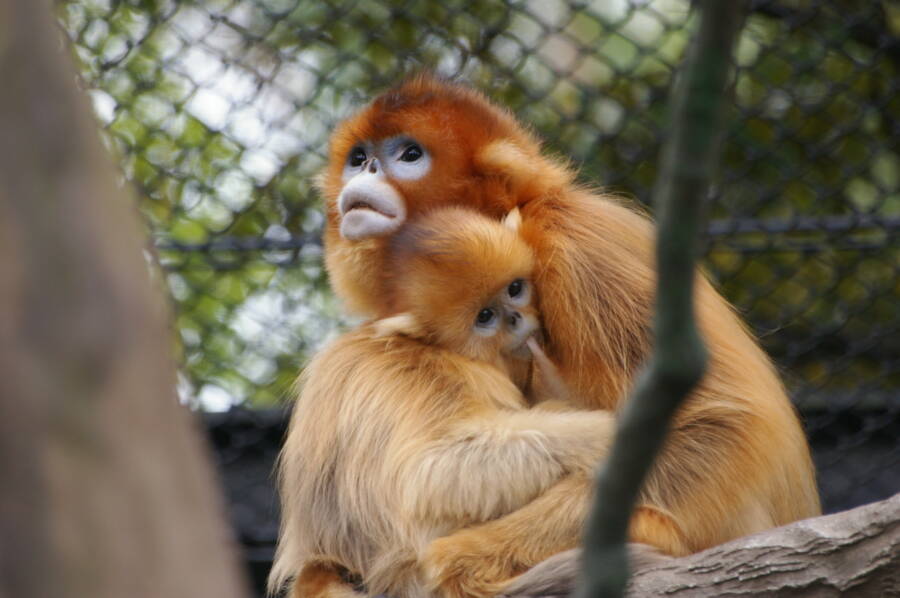 They are also at risk from pelt traders who sell their fur for its beauty and their bones for their supposed medicinal benefits.

The extinction of the blue face monkey would not only deprive people of this beautiful and rare animal, but it would drastically affect the ecosystem of their habitat. The species helps regenerate plant growth with ease by consuming seeds and dispersing them in their environment through fecal deposits into the soil.

China included the golden snub-nosed monkey in its Wildlife Protection Act of 1989, and illegal hunting has declined since. And though agricultural development continues apace, the country has established three nature reserves in the region to protect the animal and the ecosystem where it lives.

Soon, its population may quickly begin to rebound, and more people can become aware of this adorable and essential creature.

After learning about the Golden snub-nosed monkey, read about the hundreds of species rediscovered in Hondura’s “Lost City of the Monkey God.” Then, take a look at 44 heartwarming photos of cute baby animals.