Inside Operation Babylift, The U.S. Government’s Plan To Save Vietnamese Orphans Before The Fall Of Saigon

In the final weeks of the Vietnam War, Operation Babylift evacuated more than 3,300 South Vietnamese orphans and placed them with adoptive families in the U.S. — but the first flight ended in tragedy. 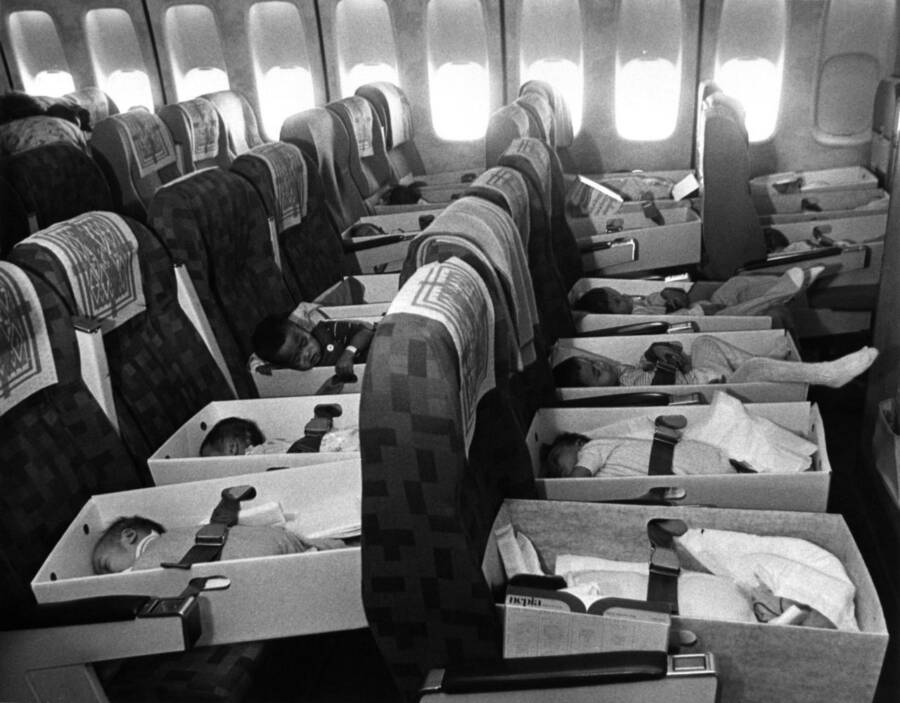 Gerald R. Ford Presidential LibraryBabies in boxes, strapped in with seatbelts inside a plane during Operation Babylift.

In 1975, the U.S. government faced a growing refugee crisis in Vietnam. Thousands of babies were orphaned during the Vietnam War. And as the North Vietnamese Army threatened Saigon at the war’s end, America designed Operation Babylift to evacuate the children.

But Operation Babylift suffered a catastrophic setback on its very first flight. On April 4, 1975, the U.S. military plane loaded with hundreds of Vietnamese babies crashed only minutes after takeoff, killing nearly half the children on board.

The tragic crash nearly doomed the rest of the operation. But thanks to the heroism of several nurses and medics on board, more than 170 babies were saved, and the operation continued to fly children out of danger.

Most of the babies were adopted by families in America, while others were reunited with their parents who managed to come to the U.S. as well. In total, Operation Babylift saved over 3,000 children in the final weeks of the Vietnam War.

What Was Operation Babylift?

Just before the fall of Saigon at the end of the Vietnam War, ambassadors for Southern Vietnam implored the United Nations for help with their orphan crisis. Food was scarce, and they needed someone to provide aid to their hungry children. 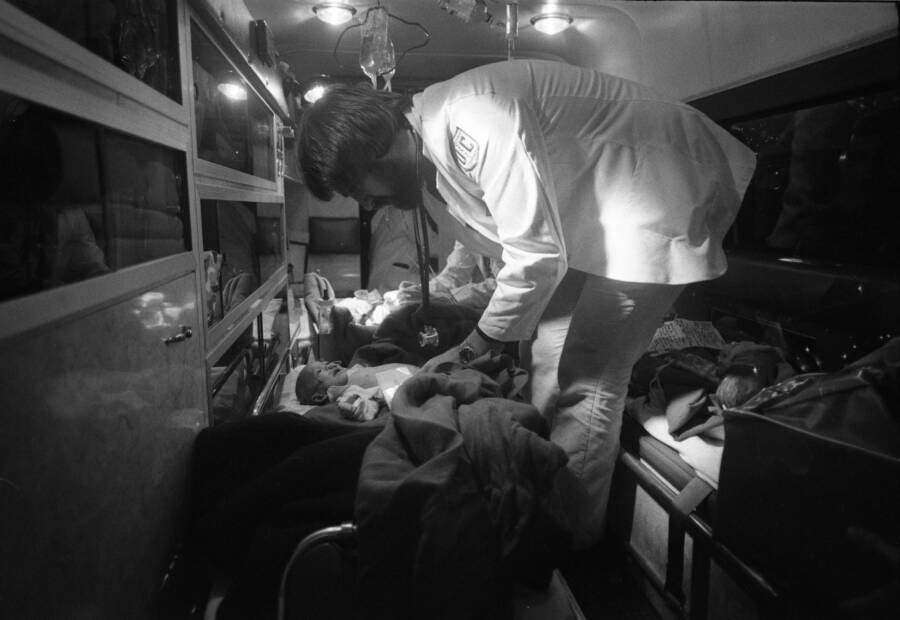 U.S. President Gerald Ford announced that the military would assist in evacuating orphans from Saigon. This was to occur in April of 1975 by a series of flights using cargo aircraft — and was named Operation Babylift.

Looking back, this was a somewhat controversial initiative. There was not a very strict selection process, and it was all pulled together over a couple of days, according to the Gerald R. Ford Presidential Library and Museum.

In addition, not all the kids were orphans. Some parents simply sent their kids to orphanages as a temporary fix to get them fed. Other parents put babies fathered by American soldiers on planes because their bi-racial status made them a target for the North Vietnamese army.

Social service organizations had petitioned the government to help evacuate the children from their Vietnamese orphanages. Optimistic Westerners wanted to adopt these babies, and agencies were glad to oblige — even placing kids who still had loving parents in Vietnam with new adoptive parents.

Furthermore, an unforeseen tragedy occurred on the very first flight of Operation Babylift.

On April 4, a Lockheed C-5 Galaxy aircraft picked up a medical team headed by Flight Nurse Lieutenant Regina Aune. After landing in Saigon, they learned there would be 314 people, including crew members, leaving Saigon — so they had to put people in the cargo hold. 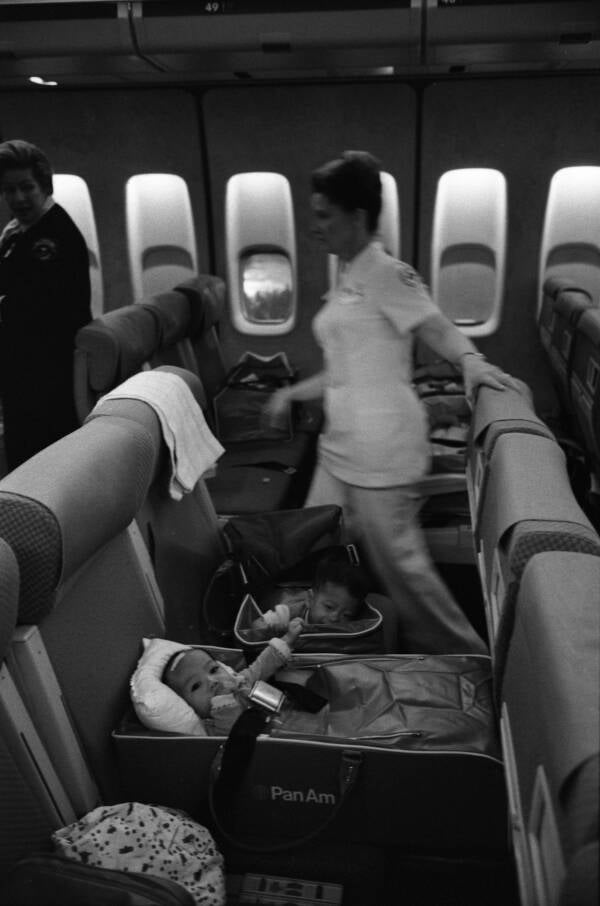 U.S. National ArchivesNurses and Vietnamese refugee children on an Operation Babylift flight upon its arrival at San Francisco International Airport.

The team began to jam-pack the plane with orphans, squeezing ten babies into seats that held three people. The troop compartment held 145 orphans and seven attendants. Another 102 orphans and 47 others were loaded into cargo.

Taking care of all these babies was going to be hectic, but Aune, accompanied by Captain Mary Klinker and other medical crew members, were optimistic as aircraft commander Capt. Dennis “Bud” Traynor took off. The first flight of Operation Babylift was underway.

However, just 12 minutes after takeoff, an explosion blew off the plane’s pressure door, center cargo door, and part of the loading ramp. Decompression was rapid, filling the fuselage with dust and debris and tearing pieces of insulation from the walls, according to NPR.

Capt. Traynor limped the C-5 within two miles of the Tân Sơn Nhứt Air Base, where they skidded down in a rice paddy at about 310 mph. They landed in an irrigation ditch. The impact tore the plane into four pieces.

The Tragic Aftermath Of The Mission’s Plane Crash

The cargo deck slammed the hardest, killing Klinker, her medical technicians, and all but eight orphans and attendants in the hold. Most of the children in the troop compartment survived, and that’s due to some incredibly heroic actions. 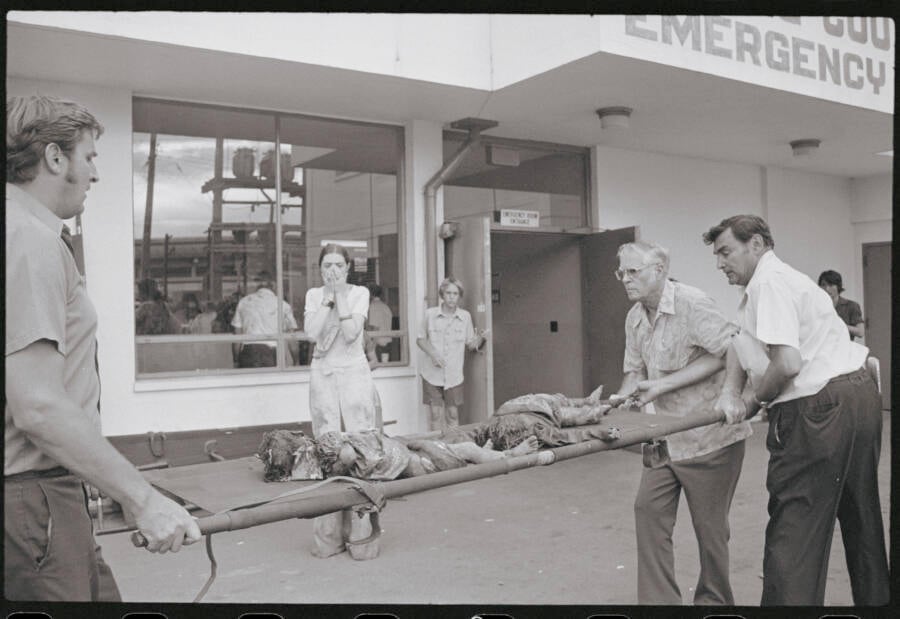 Bettmann/Getty ImagesA survivor grieves as she watches stretcher carrying an orphan being taken into the hospital following the Operation Babylift crash.

Aune was thrown the entire length of the upper deck, badly breaking her foot and bleeding heavily from a leg wound. Still, she dragged herself back in and out of the plane through the mud countless times, carrying a total of 80 orphans to rescue helicopters.

When she could do no more, Aune asked the first officer she saw if she could be relieved of her duties. She then immediately passed out. Later, they discovered that Aune saved all those babies not only with a broken foot, but with a broken leg, broken vertebrae, and many other injuries.

Greg Gmerek, a military medic on board, also survived the crash — saving as many people as possible.

“Mud was flying at me and I went flying around all over the place,” Gmerektold Military Times. “We just started getting the babies out as best we could.” 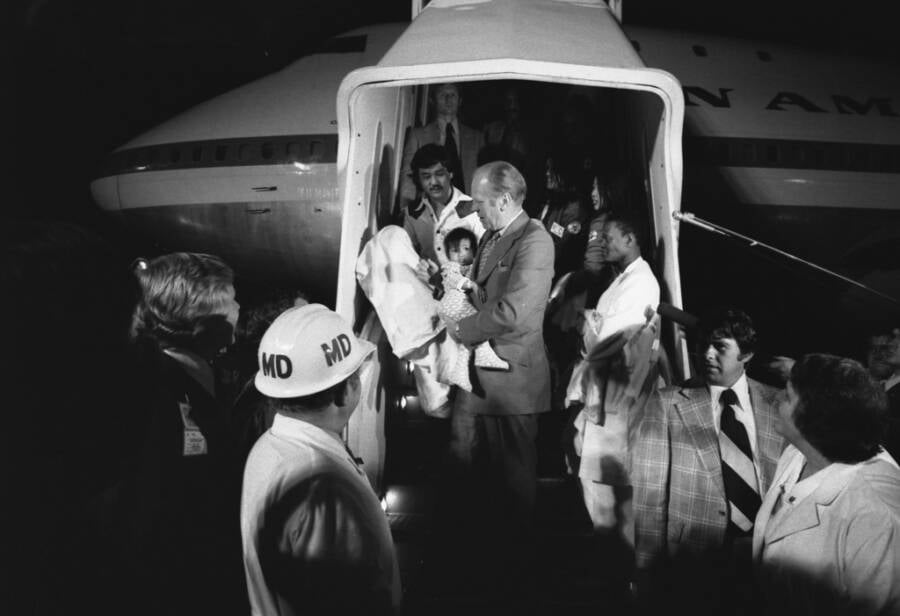 Gmerek had not been wearing a seatbelt because at least two children were strapped into each seat, and he made his rescues with six broken ribs and a partially collapsed lung.

“I thought about them all the time,” he said of the children.

In all, 138 of the 314 people aboard the first Operation Babylift died in the horrific crash.

Even after tragedy, the operation moved forward. Flights out of Saigon loaded with children and babies continued until the attacks on Tan Son Nhut airport by the North Vietnamese Army and Viet Cong made takeoff impossible by April 26.

Playbody publisher and U.S. Army veteran Hugh Hefner even chartered his company plane, “Big Bunny,” to send Playboy Bunnies to Vietnam to retrieve 41 of the orphans. The press dubbed it “Operation Bunnylift.” 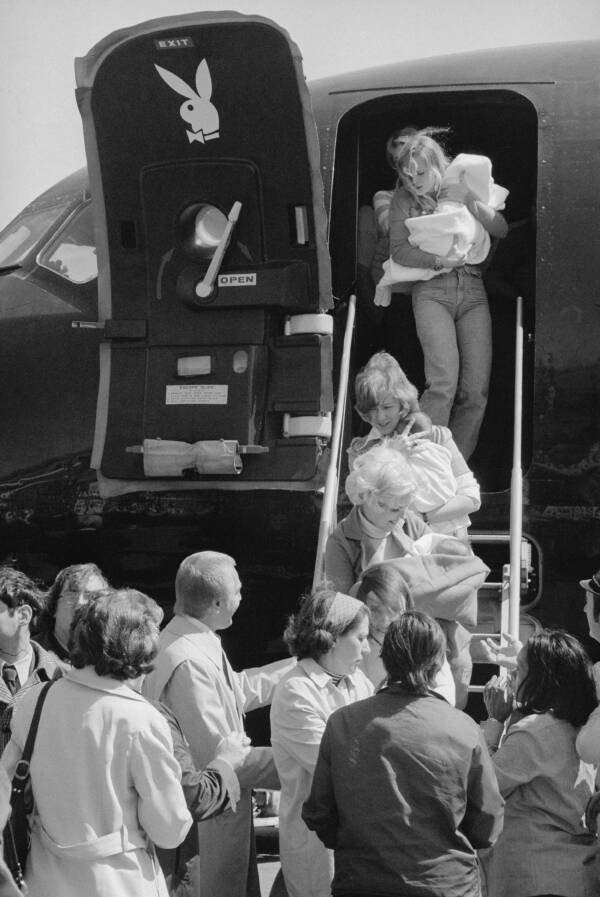 Ultimately, Operation Babylift rescued and relocated over 3,300 Vietnamese infants and children, according to the U.S. Agency for International Development’s 1975 Operation Babylift Report. Nearly 2,500 were adopted by families in the United States and its allies.

Later, the military gave 37 decorations and awards to the crash survivors or their family members. They gave Captain Traynor and his co-pilot the Air Force Cross. Klinker was posthumously awarded the Airman’s Medal after she became the last U.S. servicewoman to die in the Vietnam conflict.

Finally, Regina Aune became the only woman in history to receive the U.S. Air Force Cheney Award, according to the Department of Defense. The award recognizes an airman for an act of valor, extreme fortitude, or self-sacrifice in a humanitarian interest performed in connection with aircraft.

After learning about Operation Babylift, read about how young airman William Pitsenbarger saved nine lives against all odds in Vietnam. Then, check out these 27 Vietnam War facts that may change how you view American history.