Inside Operation PBSuccess, The Mission That Saw The CIA And A Banana Company Destroy Guatemalan Democracy

In 1954, Operation PBSuccess dismantled Guatemala’s newfound democracy — so that an American fruit company could continue to profit off the old government’s corruption. 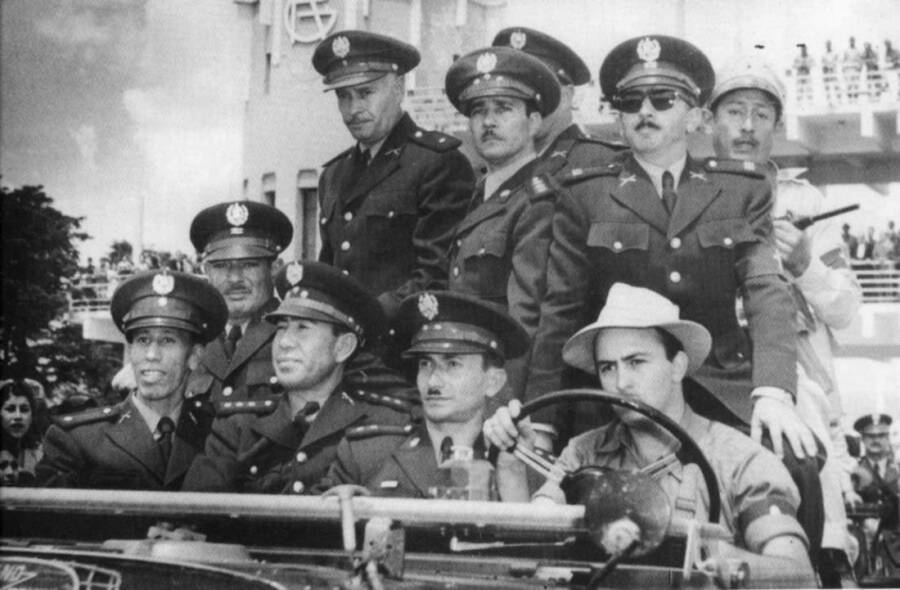 But in the 1940s, a democratic revolution and calls for justice threatened to undermine United Fruit’s position. So the company leveraged its powerful connections inside the White House — painting the new Guatemalan government as a dangerous Communist administration in the process.

As a result, the CIA launched Operation PBSuccess: a sweeping coup that destroyed the country’s democracy, installed a dictator, and sparked a decades-long civil war and genocide of the Indigenous Mayan people.

The United Fruit Company Before The Guatemalan Revolution 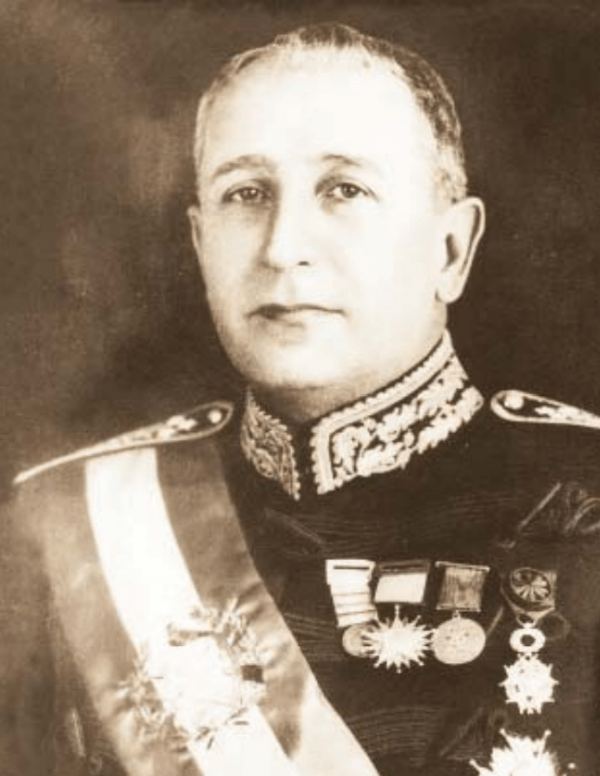 In the first half of the 20th century, Guatemala was ruled by one product alone: bananas. The country was dubbed a “banana republic,” a derogatory term often applied to poorer countries whose economies are based on a single crop (in this case, bananas). These countries are also usually governed by corrupt politicians.

The banana industry was dominated by United Fruit, and the firm controlled 42 percent of Guatemala’s land, over two-thirds of its exports, and even its telephone and telegraph systems. Cozy with Jorge Ubico, Guatemala’s president-dictator, United Fruit faced little resistance over its widespread bribes, meager wages, and labor abuses.

But in June 1944, the tides seemed to shift. The Guatemalan Revolution forced Ubico to resign after over a decade in power.

In the aftermath of the revolution, Guatemala went through its first legitimate elections in history — promptly electing liberal reformers who promised to introduce a minimum wage, build 6,000 schools, and establish near-universal suffrage.

By 1951, with the election of former colonel Jacobo Arbenz, Guatemala began eyeing a bigger target: taking back control of its economy. 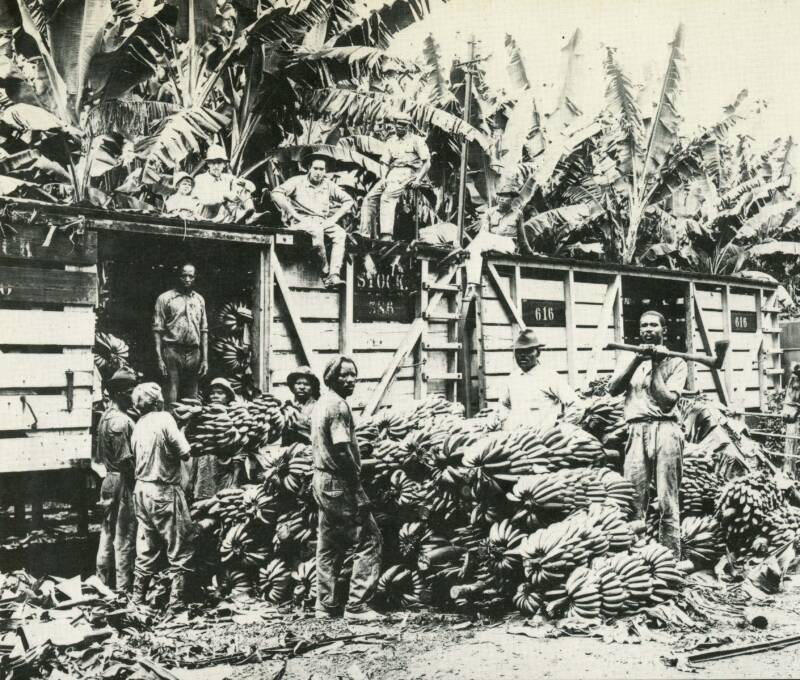 United Fruit watched the democratic revolution with trepidation, recognizing the distinct threat that the newly-invigorated populace posed for its exploitative business practices.

Trepidation turned into alarm when the Arbenz administration passed “Decree 900.” The new measure redistributed land to over 100,000 Guatemalan families, aiming to transfer undeveloped land held by large property owners to landless farmers. United Fruit owned nearly half of the country — which included plenty of targeted land.

This wasn’t any generic seizure. The government paid for every acre it took, using valuations that property owners had listed in their previous tax filings.

But United Fruit had been serially under-valuing its holdings to avoid taxes. As such, by the end of 1952, Arbenz’s administration had reclaimed 40 percent of the company’s land at little cost. 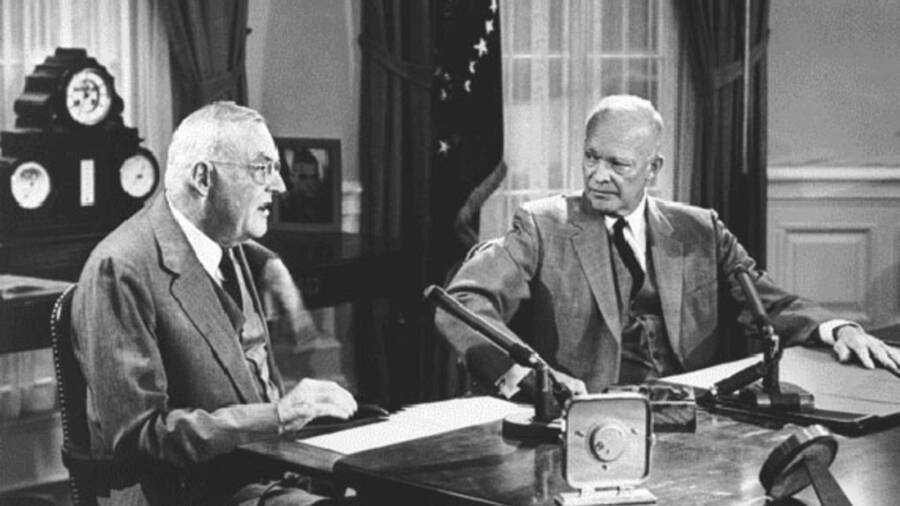 Library of CongressJohn Foster Dulles and Dwight D. Eisenhower in 1955.

United Fruit couldn’t sit by and wait. It needed the support of the American government to stop Arbenz.

This was the 1950s — the early years of the Cold War — and so United Fruit began a wily strategy that framed Guatemala as a Communist foe in the U.S. press.

Their mission was helped by the company’s connections. Secretary of State John Foster Dulles was a former lawyer for United Fruit. His brother Allen Dulles, the director of the CIA, was formerly on United Fruit’s Board of Directors. And the company’s PR Executive, Ed Whitman, was married to President Dwight D. Eisenhower’s personal secretary, Ann Whitman. 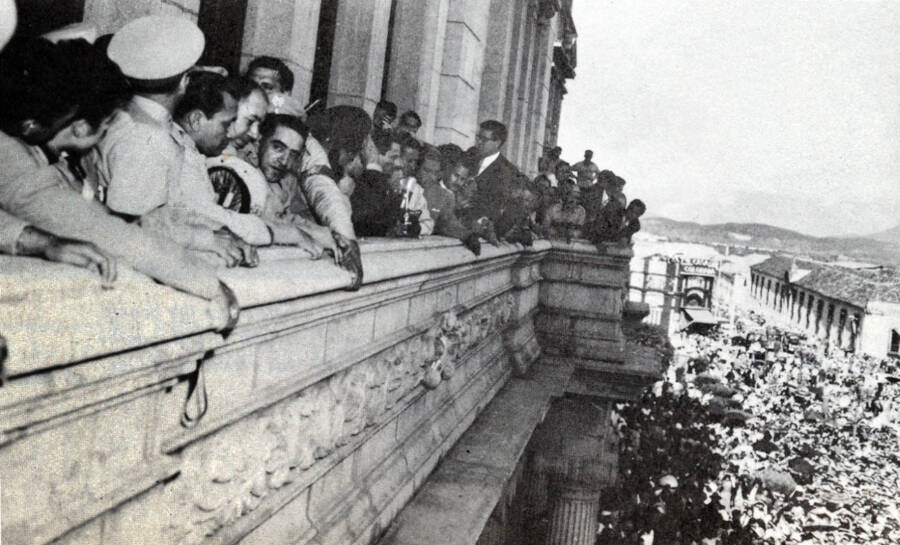 Wikimedia CommonsArmas and his supporters at the presidential palace.

The stated intention of PBSuccess was clear: “to remove covertly… the menace of the present Communist-controlled government of Guatemala.”

To achieve this goal, the CIA recruited a disgruntled ex-Arbenz military officer named Carlos Castillo Armas. Armas rallied anti-government sentiment and pieced together an army of a few hundred men, supplied and supported with U.S. equipment and intelligence.

On June 18, 1954, Armas and his men attacked with the help of logistical support from the U.S. The CIA began by launching a propaganda campaign, warning the Guatemalan public and Arbenz that a major invasion was underway, setting up a clandestine radio station that jammed Guatemalan signals and flooded the airwaves with greatly exaggerated messages.

“It is not true that the waters of Lake Atitlan have been poisoned,” blared one message. “At our command post here in the jungle, we are unable to confirm or deny the report that Castillo Armas has an army of 5,000 men.”

Skilled American pilots were hired to bomb fortresses and other strategic points in Guatemala City. As bogus transmissions filled the airwaves, the CIA used spies within the Guatemalan military and government to actively undermine President Arbenz’s authority, demoralize his supporters, and block efforts to defeat Armas.

The CIA’s psychological warfare succeeded. Panic overtook the capital and Arbenz’s supporters began losing the faith. And when he attempted to raise his own militia, only a few hundred civilians showed up.

On June 27, 1954, just nine days later, Arbenz resigned. He sought asylum at the Mexican embassy and later fled the country.

The Miserable Aftermath Of Operation PBSuccess 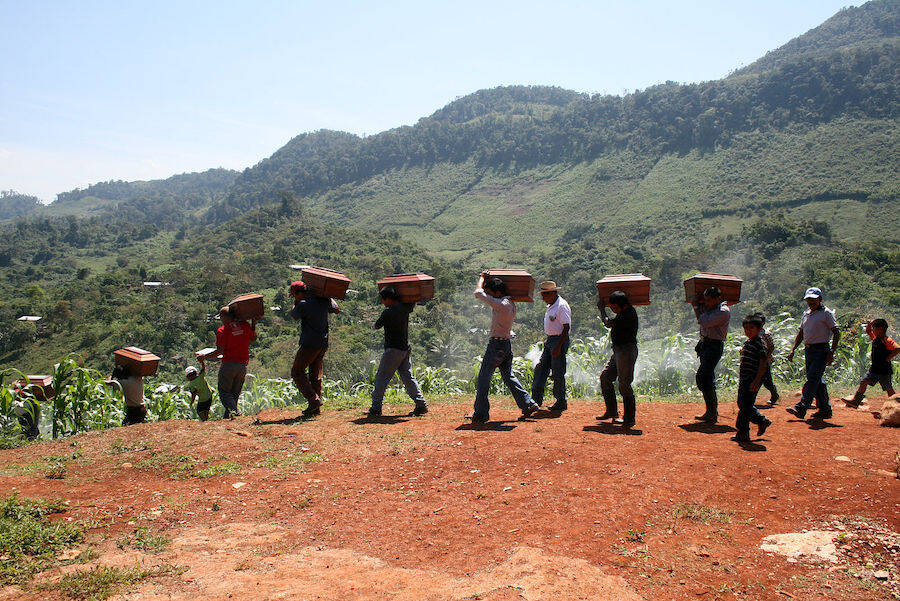 Wikimedia CommonsIndigenous people carrying their loved ones’ remains after an exhumation in Guatemala in 2012.

While many American authorities were pleased with the CIA’s coup, other countries didn’t hesitate to make their disgust clear.

When Allen Dulles described the coup as a victory of “democracy” over Communism, a British official likened his statement to “Hitler speaking about Austria.” Newspapers around the world condemned the Guatemalan coup, calling it “economic colonialism.”

Meanwhile, calling the coup in Guatemala a victory for democracy proved to be a stretch. Armas promptly arrested several thousand opposition leaders, branded them as Communists, and actually repealed the democratic constitution of 1945. Progressive reforms such as labor unions were dismantled, and, of course, United Fruit was welcomed back in.

This new regime had profound implications for Guatemala over the next 30 years. From 1960 to 1996, a civil war swept the country. Leftist rebels with a large degree of popular support fought against government forces supplied with American weapons. The largest of these rebel groups was the “Guerrilla Army Of The Poor,” a force of insurgents that included as many as 270,000 members at one point, mostly ethnically Mayan people.

In an attempt to wipe out the opposition, the regime began a “scorched earth” policy against its opponents, systematically jailing and exterminating ethnic Mayans. A UN-sponsored Commission for Historical Clarification in 1999 concluded that the U.S. training of the officer corps in counterinsurgency techniques “had a significant bearing on human rights violations during the armed confrontation.”

Today, this period of ethnic cleansing is known as the “Guatemalan Genocide” or “Silent Holocaust” in which some 200,000 people were killed, mostly Indigenous Mayans.

Documents relating to Operation PBSuccess were hidden for decades but have been declassified in recent years. In the process, the United States’ long and unsavory history of intervention in developing countries has become increasingly clear.

While Guatemala’s civil war ended with a peace accord between the government and the guerilla fighters, the country is still struggling to come to terms with the effects of that brutal era — particularly the hundreds of thousands of Indigenous lives that were lost.

And as for United Fruit, the corporation rebranded in 1984 as Chiquita Brands International. The company still sells bananas all over the world — and it remains the leading distributor of bananas in the United States.

After learning about Operation PBSuccess in Guatemala, read about King Leopold’s brutal reign over the Belgian Congo. Then, discover more about Simon Bolívar, the “Great Liberator” of South America.

Jeffrey Wang
Jeffrey G. Wang is an amateur historian from San Diego, CA. He also writes on Quora, where he was a 2018 Top Writer.
You might also like
Remove Ads
×
Follow hu On