What You Need To Know About The Militia Standoff In Oregon 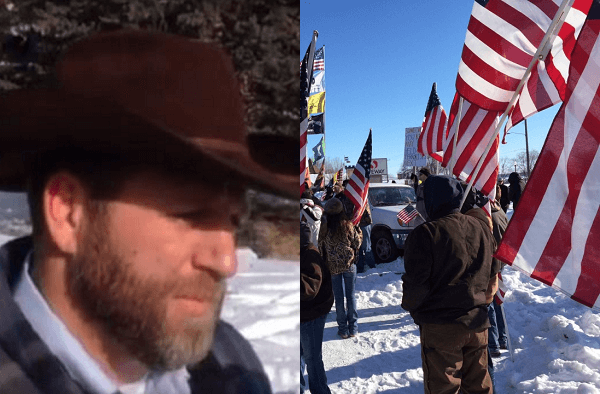 A cadre of white, armed Americans overtook an Oregon federal wildlife refuge on Saturday night. The group claims it is doing so to fight against the so-called tyranny of the federal government, adding that they are not opposed to inflicting violence if the situation calls for it. Militia leader Ryan Bundy went so far as to tell an Oregon paper that the group is prepared to “kill or be killed.”

Since the takeover, the group has been called everything from “yeehawd-ists” to “Vanilla ISIS,” with many wondering why the media has so far refrained from calling them terrorists. If you missed the story over the weekend, this should catch you up on what you need to know.

At its most basic, the takeover is an armed land grab

Protests started as a peaceful demonstration to abet the prison sentences of Dwight and Steven Hammond, a 73-year-old rancher and his son. The two men had been handed prison sentences for arson after starting fires on their property that crept onto federal lands in eastern Oregon. The Hammonds illegally started fires in both 2001 and 2006 to, in their words, keep wildfires and invasive plant species off of their land near Burns, Ore. The fire in 2001 spread to around 140 acres of government land, and a burn ban was in effect in 2006 while firefighters in Oregon were focusing on wildfires elsewhere in the state.

The demonstration quickly turned ugly. Armed men convened in front of a nearby supermarket and drove their trucks around 30 miles to the administrative building of the Malheur National Wildlife Refuge, which is federal land that the men believe should be given back to the people. It’s unknown exactly how many men went to the refuge, but once there, they hunkered down and prepared for battle.

“These men came to Harney County claiming to be part of militia groups supporting local ranchers, when in reality these men had alternative motives to attempt to overthrow the county and federal government in hopes to spark a movement across the United States,” Harney County Sheriff Dave Ward said in a statement on Sunday.

How did protests over the Hammonds’ arrest lead to this?

The Hammonds were charged for arson and served their time, but in October of 2015 a federal judge ruled that they didn’t serve long enough sentences under the federal Antiterrorism and Effective Death Penalty Act of 1996.

Although the father and son were perfectly willing to do the time for their crime, militia leader Ammon Bundy rallied people to Burns, Ore., to fight against what he believes is a textbook example of government overstepping its boundaries. Arming himself and taking over federal land was his “hard stand against (federal) overreach,” he said in a Facebook video on Saturday.

Who are the wannabe militiamen?

Nevada rancher Ammon Bundy has a storied history of railing against federal land laws. As recently as 2014, his father Clive’s ranch was the location of a standoff between ranchers and federal agents over cattle grazing rights.

Some of the more far out militia members belong to an organization known as the Oath Keepers, which believes that the government will become tyrannical and hold valuable goods on public lands for themselves after disarming the American people.

What Bundy and his fellow militiamen have in common is a deep-seated problem with the Bureau of Land Management, an arm of the federal government they believe has overstepped rights in managing public lands. Competing ideologies over the use of federal lands have caught fire in recent years, culminating in standoffs like that with Clive Bundy in Nevada and now with Ammon Bundy in Oregon.

Oregon State Police have told residents to stay away from the occupied territory, but there hasn’t been any mention of calling the group’s bluff and kicking them off of the government-owned land. Apparently, law enforcement is following its own advice by staying away from the wildlife refuge despite state and federal authorities insistence that they are monitoring the situation. As many on social media have noted, this stands in stark contrast to the police crackdown on past peaceful protests, such as 2011’s unarmed and peaceful Occupy movement and police brutality demonstrations in Ferguson, Missouri.

The media seems uncertain what to call them, but they are most certainly terrorists

In describing the group, the Washington Post has used the term “occupiers,” the New York Times used “armed activists” and “militia men,” and the Associated Press took the long route by calling Bundy and his crew “a family previously involved in a showdown with the federal government.”

Yet the men are armed in a federal building, having stated that they would use violence in order to achieve a political goal, making them terrorists by definition. The FBI defines domestic terrorism as having three characteristics:

• Involve acts dangerous to human life that violate federal or state law.
• Appear intended (i) to intimidate or coerce a civilian population; (ii) to influence the policy of a government by intimidation or coercion; or (iii) to affect the conduct of a government by mass destruction, assassination or kidnapping.
• Occur primarily within the territorial jurisdiction of the U.S.

“If they think that’s worth bringing their armies in here and harming or fouling that endeavor,” said Ryan Payne, an Army veteran involved in the standoff, “We’ll just have to read the Constitution and look at our Bibles and see who’s on the right side.”