In August, Leicester Hall, one of Mulholland’s accomplices in the water swindle, showed up in Owens Valley. Local men kidnapped him, drove him to the middle of nowhere, then removed his blindfold. His eyes met with a tree, a noose, and a posse. In desperation, he did the Freemason distress call. Lucky for him, one of the men was a Mason and his life was saved. 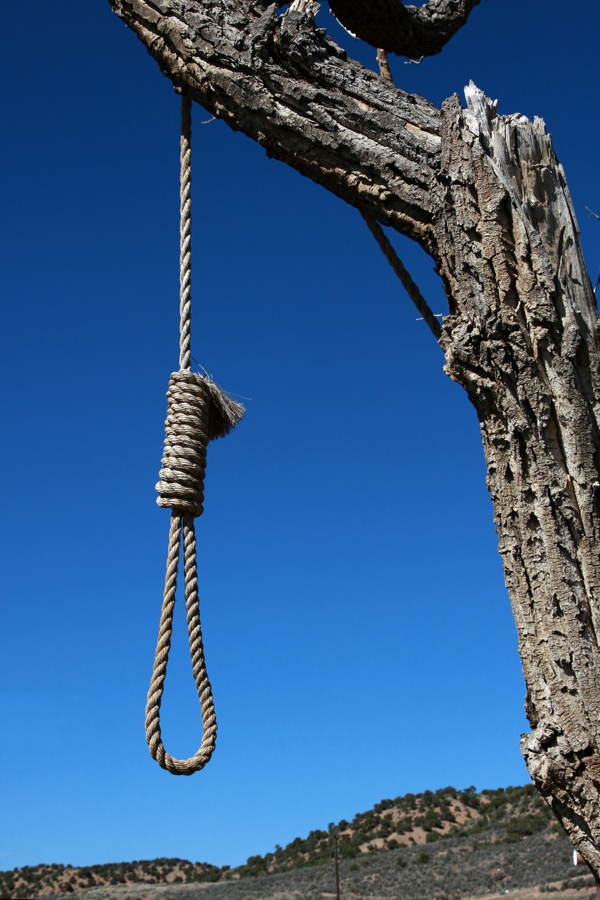 Several sections of the aqueduct fell to dynamite explosions. When the DWP put out a report recommending terminating all irrigation in the valley, the dynamitings increased. Armed DWP guards showed up to patrol the aqueduct. As pressure on them grew, more and more valley residents sold their water rights. 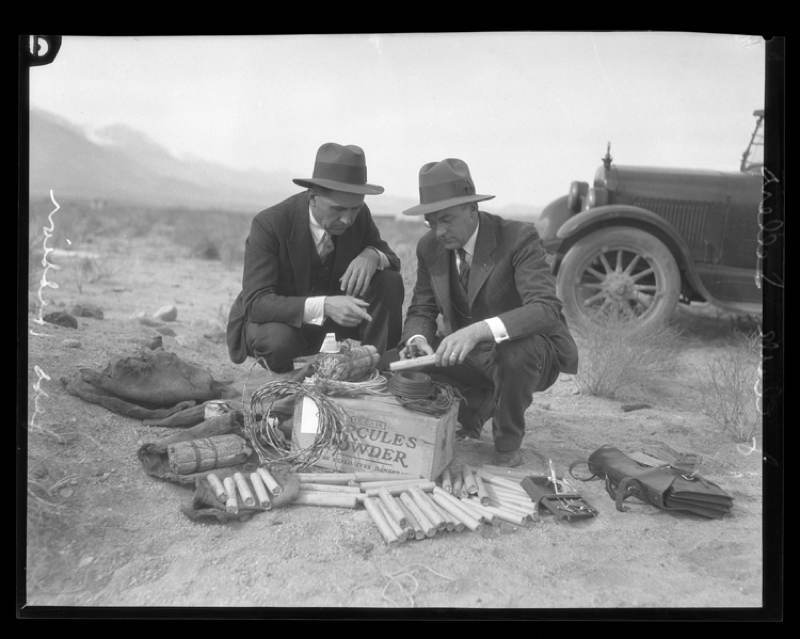 Two men examine a dynamite kit found near the aqueduct in 1924
Source: UCLA

On November 16, a strange kind of protest began. A hundred men drove to the Alabama Gates, which were designed to allow floodwaters to flow into the valley, easing strain on the aqueduct. They opened the gates and the Owens River flowed once more through the valley and into Owens Lake. 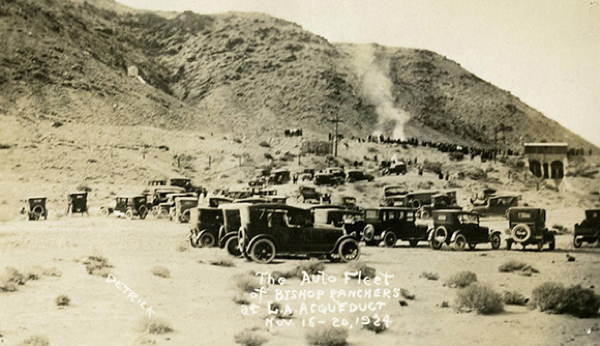 Unsurprisingly, Mulholland was furious. He sent LAPD detectives to the valley but the local sheriff stopped their cars, telling them, “If you go up there and start trouble, I don’t believe you will live to tell the tale.” The cops turned back. Mulholland got a court injunction against the aqueduct’s seizure, but the protesters just threw the paperwork into the river. 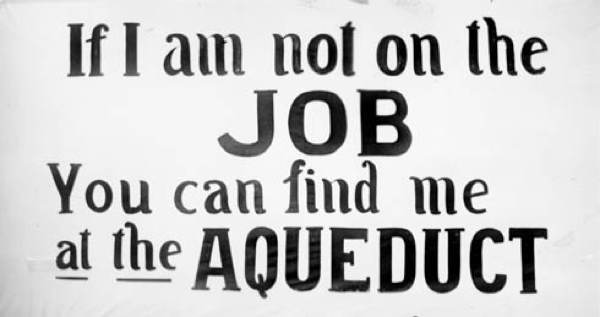 A sign made by one of the local shopkeepers
Source: Owens Valley History

Oddly, the protest turned into a sort of picnic and camping event over four days. Families came from all over the valley to stand up for the land they had cultivated for generations. Not far away, Tom Mix, the cowboy movie star, was filming. In solidarity, he sent over his orchestra. Someone dug a barbeque pit. The sheriff showed up and the crowd, which by this time had grown to seven hundred, all sang hymns together. 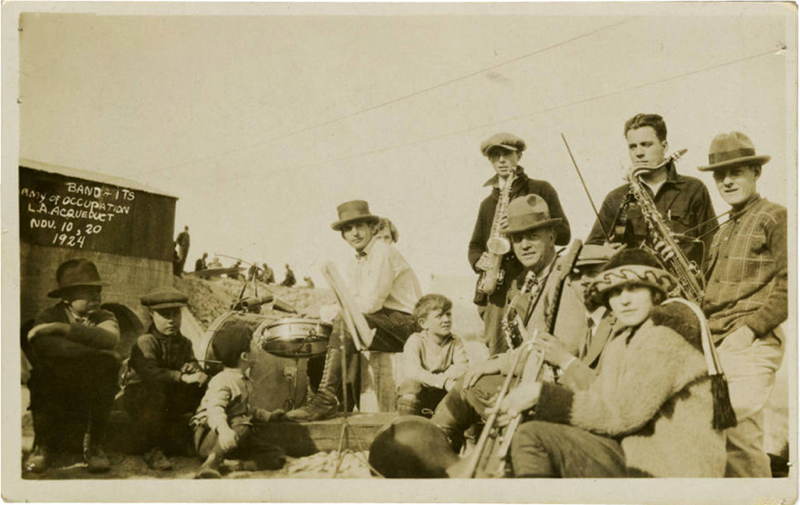 An Owens Valley banker met with LA leaders, who agreed to a price for the entire valley, but once the protesters gave back the Alabama Gates, those same LA men disavowed their agreement. The DWP flooded LA with propaganda depicting Owens Valley as flourishing and the protesters as lawbreakers. The propaganda hasn’t stopped, as is evidenced by the DWP page called “Benefits to the Owens Valley.” 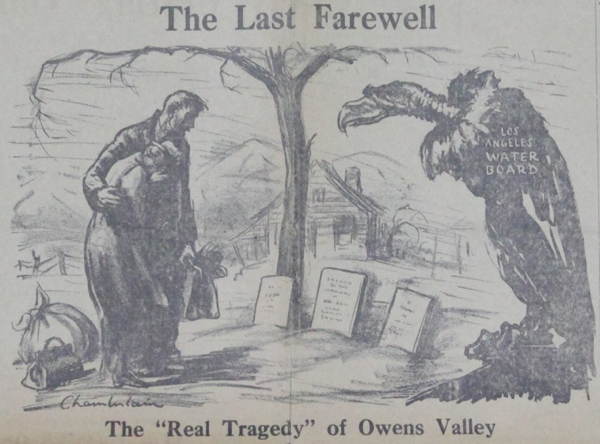 Two and a half years later, the No Name Siphon (that’s really what the pipe is called) was blown to bits. Crews began to fix it, then another blast hit a sixty-foot section of the aqueduct in Big Pine. Yet another explosion claimed 150 feet in June. Mulholland packed a train car with LAPD carrying Winchester carbines and machine guns. They set up roadblocks and searched cars for dynamite. After they found nothing, it all dwindled and the cops left town.

A triptych of the Los Angeles Aqueduct in Owens Valley
Source: Blogspot

The explosions and Mulholland’s retaliations stopped following two major events. First, the bank that held the mortgages for every valley farm was shut down after its president and treasurer were arrested for fraud. Second, the St. Francis Dam collapsed twelve hours after Mulholland inspected it and deemed it safe. The flood destroyed towns and took hundreds of lives in its five-hour push to the sea. 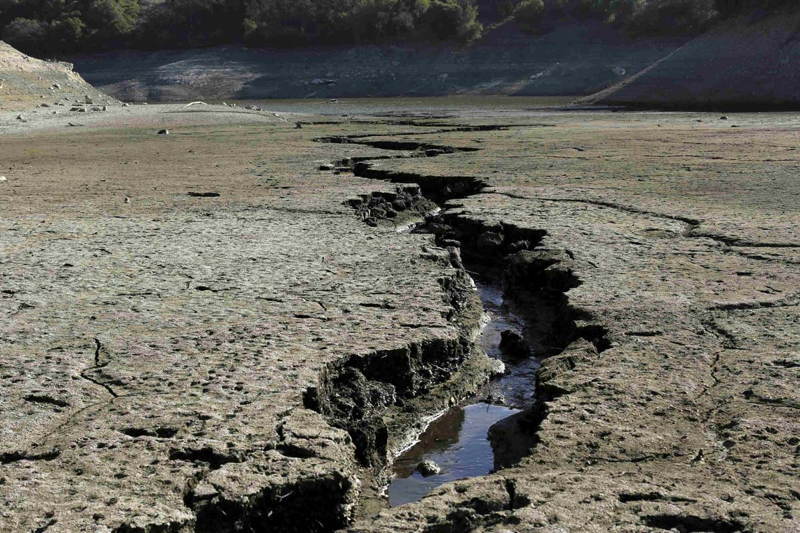 The problem continues today. In California’s Central Valley, a battle rages over irrigation as a severe drought plagues the state. Farmers in this semi-arid region that should never have been cultivated in the first place now run the risk of not receiving water to irrigate their fields this year.

California is considering regulations on how much groundwater can be used, and it’s a problem that will likely worsen with climate change. And as the past has shown us, no change will come without a fight.