Researchers have now uncovered the DNA of a previously unknown group of hominids. 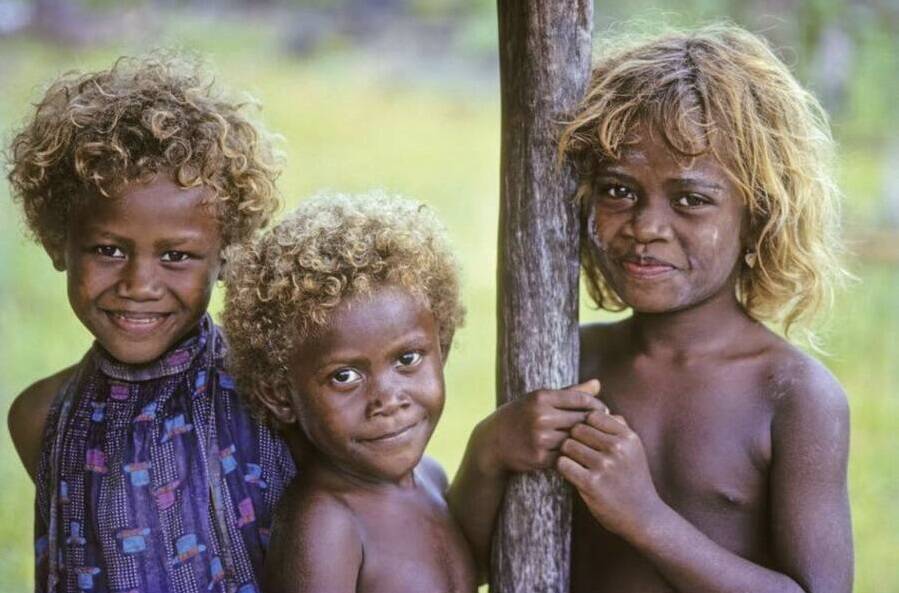 Most everyone knows that the islands of the South Pacific are some of the most remote and unique places on Earth, but a 2016 study revealed just how distinctive the area’s inhabitants really are.

Researchers found traces of a previously unknown human ancestor in the DNA of the Melanesians, a group of Pacific Islanders living throughout Papua New Guinea and the surrounding area.

Ryan Bohlender, a statistical geneticist at the University of Texas in Houston, reported the findings at an annual meeting of the American Society of Human Genetics on Oct. 20, 2016.

According to Ancient Origins, a computer analysis suggested that the unidentified ancestral hominid species that researchers discovered is unlikely to be either Neanderthal or Denisovan. Because these are the only two known predecessors of humankind at this point, that conclusion is remarkable.

“We’re missing a population or we’re misunderstanding something about the relationships,” said Bohlender. 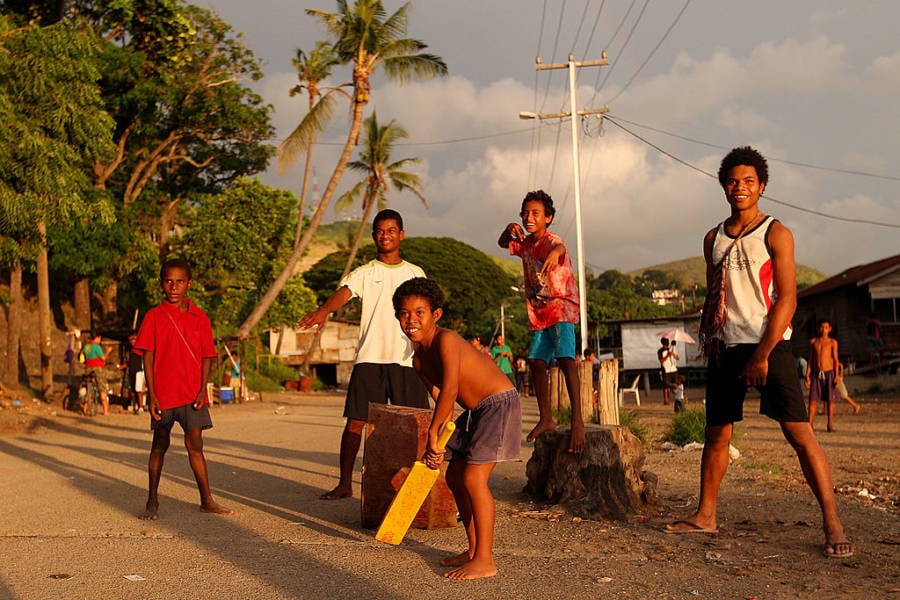 Chris Hyde/Getty ImagesChildren from the village of Hanuabada play cricket in the streets on February 24, 2012 in Port Moresby, Papua New Guinea.

Neanderthal fossils have been found all over Europe and Asia, while Denisovan DNA evidence is based entirely on a finger bone and a few teeth discovered in a Siberian cave in 2010. But the DNA that Bohlender studied contained elements separate from either of these groups.

Indeed, interbreeding between Neanderthals and Denisovans did not tell the whole story regarding the genetic makeup of the Melanesians.

That said, this third human ancestor could be an extinct, distinct cousin of the Neanderthal, according to the modeling done by Bohlender and his colleagues. But much about this unexplained DNA remains mysterious. 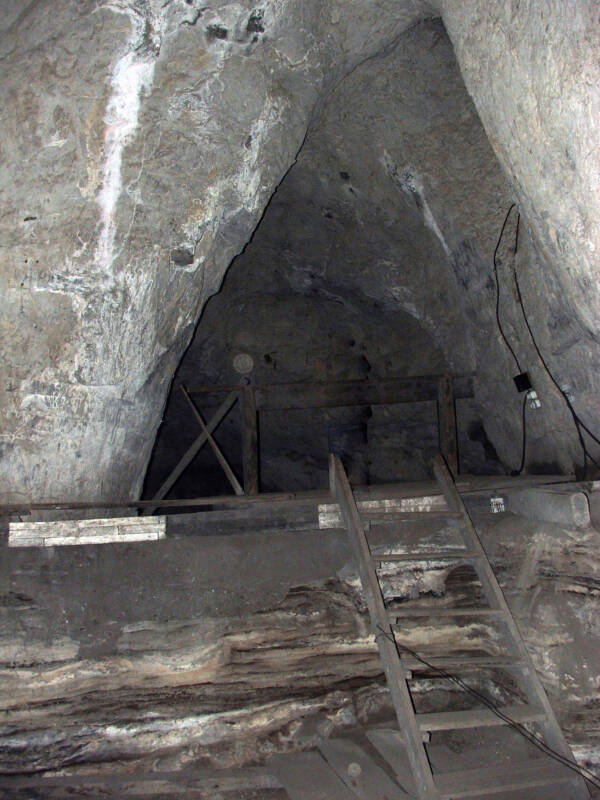 Wikimedia CommonsThe Denisova cave in Russia, where researchers found teeth and the finger bone that allowed scientists to map the Denisovan genome.

According to Science Alert, it’s largely agreed that between 100,000 and 60,000 years ago (though estimates vary widely), our early ancestors left Africa and first made contact with Neanderthals, another hominid species living in Eurasia. This eventually left both Europeans and Asians with distinct traces of Neanderthal DNA.

Bohlender’s computer models are able to discern how much Neanderthal and Denisovan DNA is found in human populations around the world.

Bohlender and his team calculated that Europeans and Chinese people carry about the same percentage of Neanderthal DNA — 2.8 percent. But Denisovan DNA isn’t as common.

Europeans have no amount of Denisovan ancestry, for example, while Chinese people have around 0.1 percent and Melanesians carry about 1.11 percent Denisovan DNA — as opposed to the 3 to 6 percent predicted by the model.

So while Bohlender’s model worked for pretty much everyone on Earth, it did not for the Melanesians.

This discrepancy between what the computer model predicted and what the researchers found leaves a missing link, an unaccounted for piece of the Melanesians’ ancestry that could be explained by a heretofore unknown human ancestor.

“Human history is a lot more complicated than we thought it was,” Bohlender said.

A CBSN interview with Dr. Michio Kaku on the genetic mapping of Denisovans.

Bohlender’s findings are echoed by a separate study from the same year conducted by the Natural History Museum of Denmark, which analyzed the DNA of 83 Aboriginal Australians and 25 locals from Papua New Guinea’s highlands.

That was the most comprehensive genetic study of Australia’s indigenous population ever undertaken. What they found wasn’t merely that Aboriginals are the oldest continuous civilization on the planet, dating back over 50,000 years, but that their DNA was so distinct that a third, unidentified hominid may have been at play.

“Who this group is we don’t know,” said lead researcher Eske Willerslev. 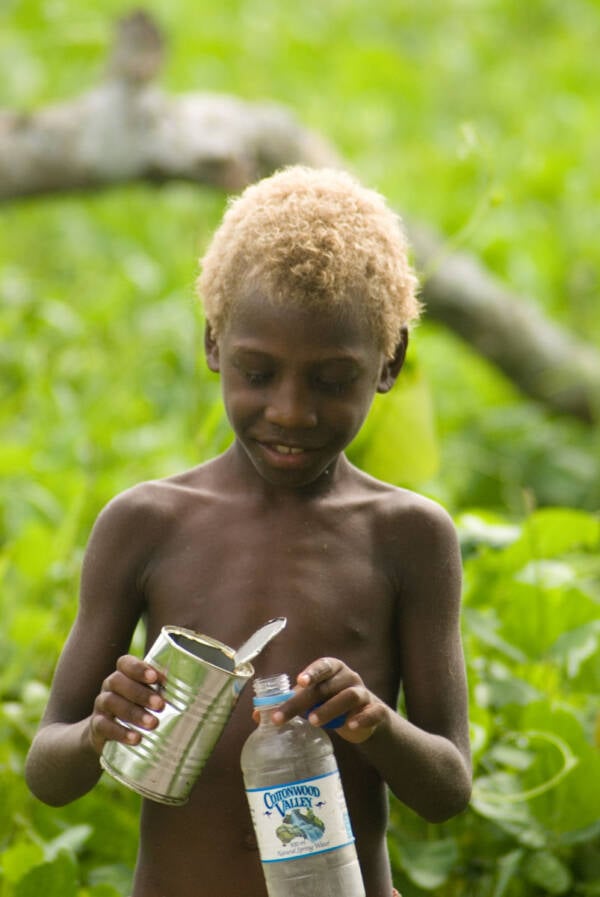 Wikimedia CommonsA blonde Melanesian boy from Vanuatu, a member of one of the rarest genetic groups on Earth.

As it stands, analyzing the genetic makeup of modern humans in order to understand which extinct early humans are their ancestors is a colossal task. It’s hard to gauge whether or not unfamiliar DNA comes from an undiscovered species or an undiscovered variant within a known species.

According to statistical geneticist Elizabeth Blue of the University of Washington in Seattle, however, if Denisovans weren’t genetically diverse and thus there is no unaccounted for Denisovan variation, then a third human ancestor would be the logical explanation.

But with our only source of Denisovan DNA being a finger bone and some teeth, we may not have a full picture of this group’s genetic makeup for a long while, further hampering any study in this arena.

Nonetheless, it seems increasingly clear that a third ancestor might explain the mysterious lineage of groups like the Melanesians and perhaps others.

Next, check out Tristan da Cunha, the most remote human settlement on Earth. Then, experience six of the most far-flung places on the planet.