Ayahuasca, The Most Psychedelic Tea You’ll Ever Try

Everything you need to know about ayahuasca, the psychedelic brew straight out of the Amazon that has taken the West by storm. 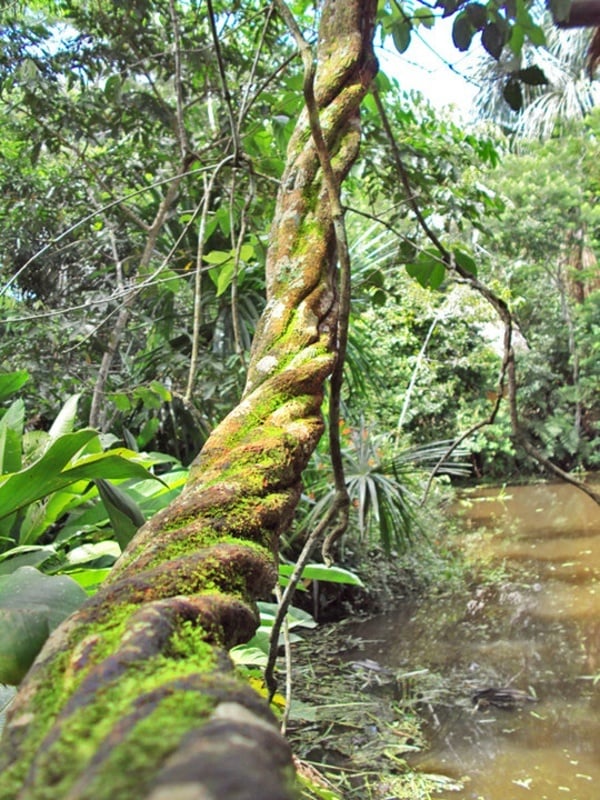 Ayahuasca is a psychoactive, healing brew that Amazonian tribes often use in religious and spiritual ceremonies. It all starts with the preparation of the Banisteriopsis capi vine (pictured). Facebook/Ayahuasca Foundation 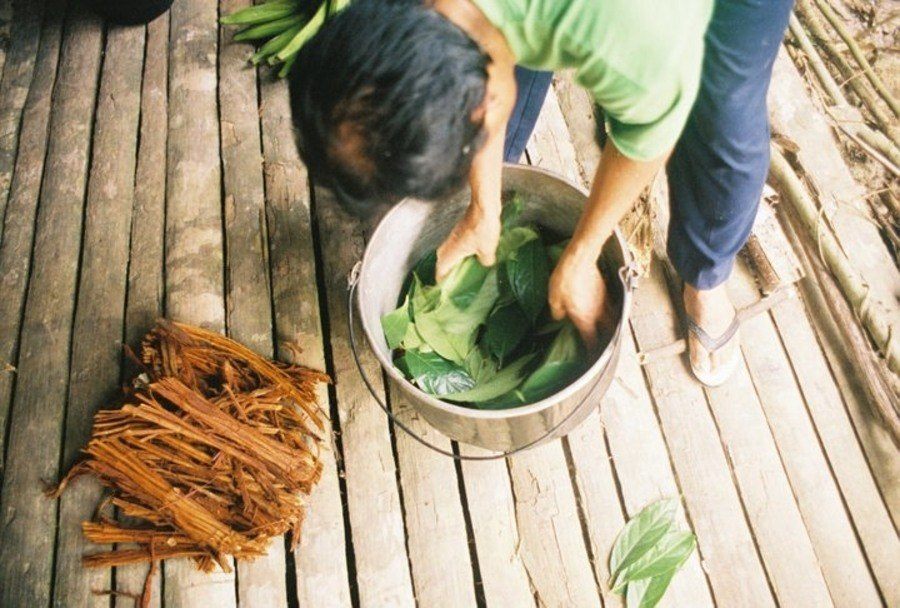 When preparing the drink, people often mix the vine and leaf together with chacruna leaves (pictured), which contain traces of DMT.

The U.S. classifies DMT as a Schedule I controlled substance, alongside drugs such as ecstasy and heroin. This means that the "spirit molecule" currently has no accepted medical use but has a high potential for abuse.Facebook/Ayahuasca Foundation 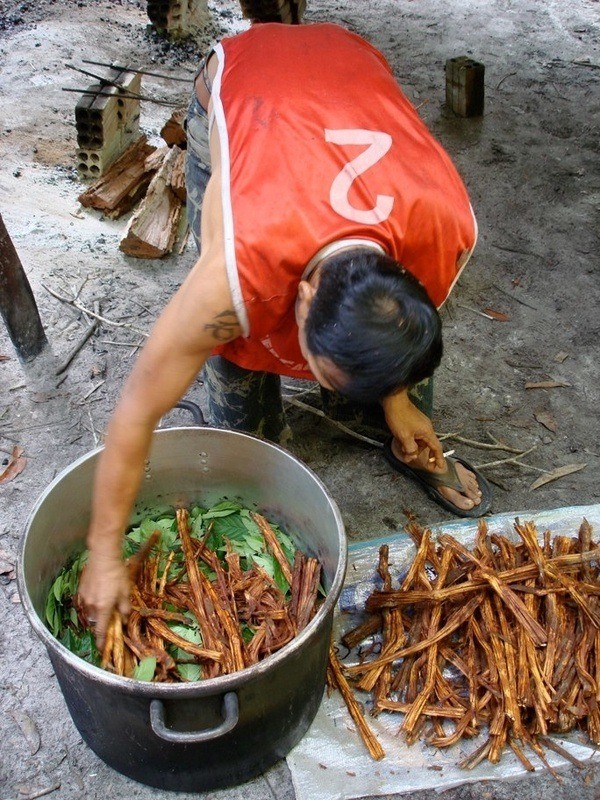 The vine can be boiled with or without additional leaves. Traditionalists consider the brewing a spiritual ritual, which includes a prayer at sunrise.Facebook/Medicine Hunter 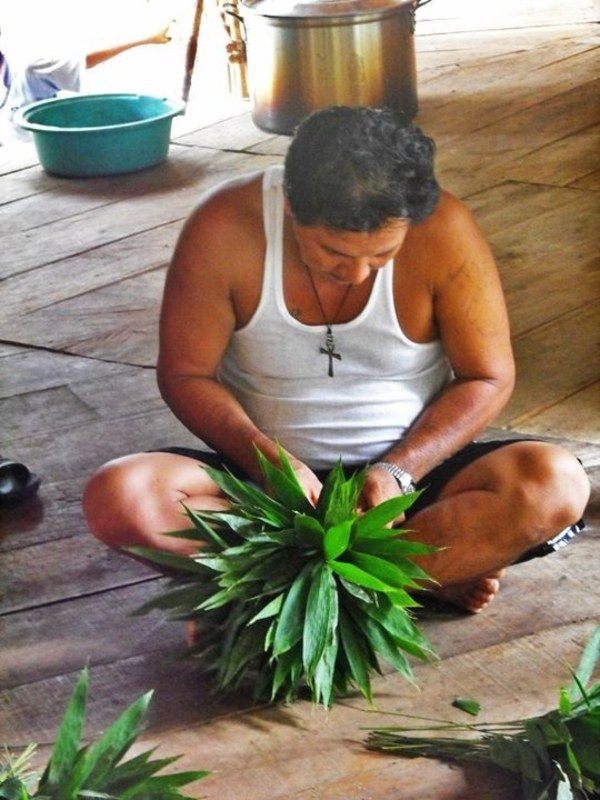 A useful ceremonial tool is a bundle of leaves called the chakapa, whose sound users believe "cleans" the energy of surrounding ceremonial areas. Facebook/Ayahuasca Foundation 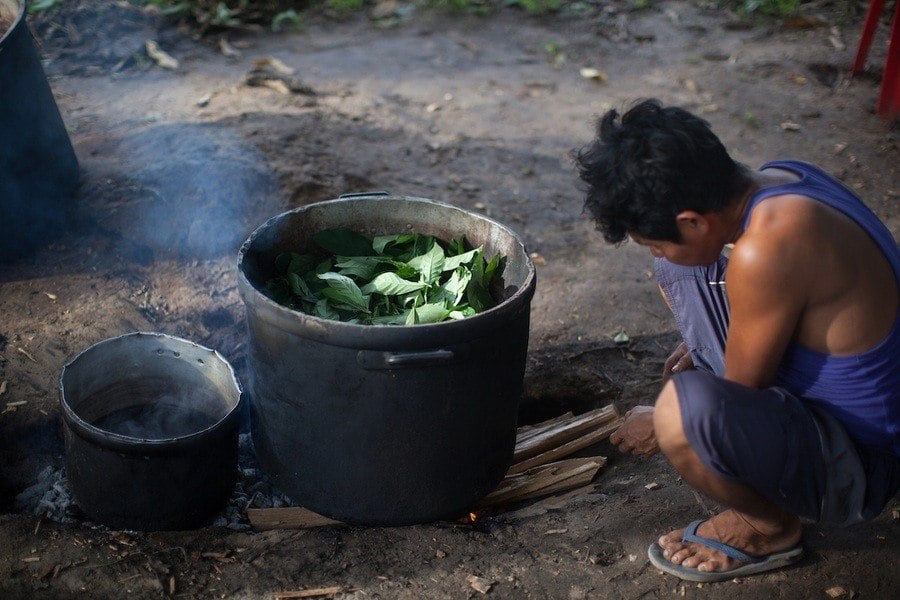 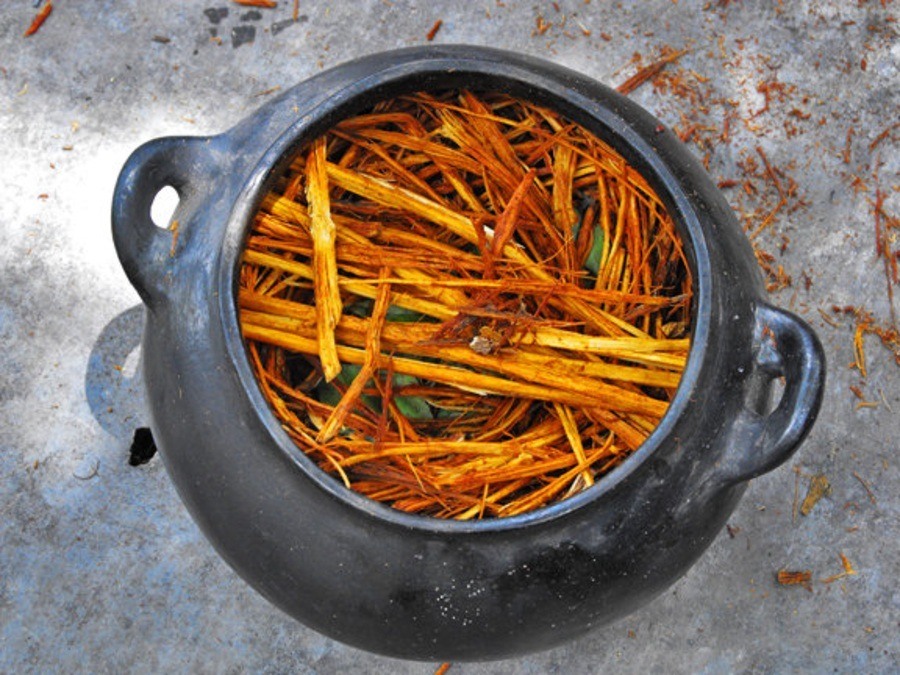 A mix of the vine and leaves before brewing.Facebook/Ayahuasca Foundation 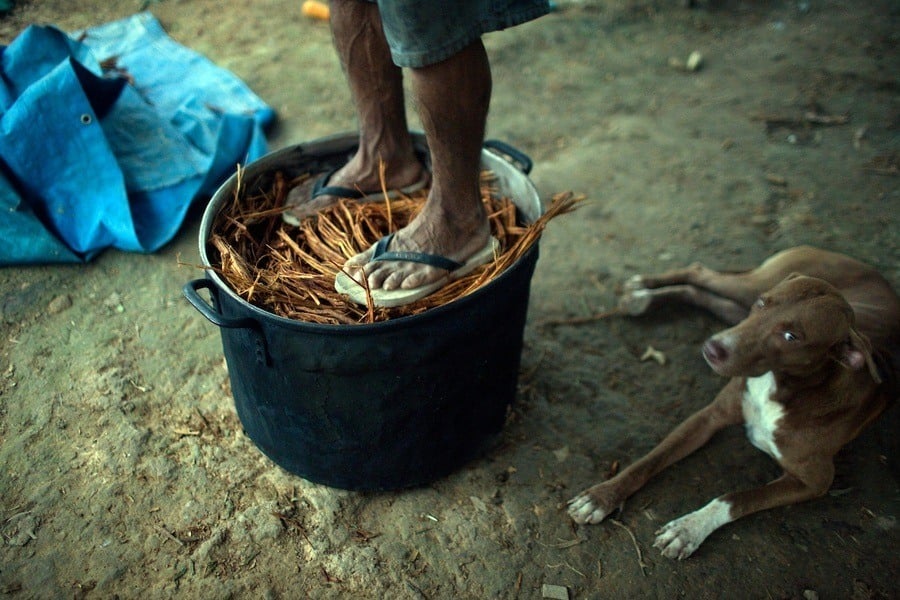 A man prepares the vine and leaves by crushing them before covering them with water.Swiatoslaw Wojtkowiak 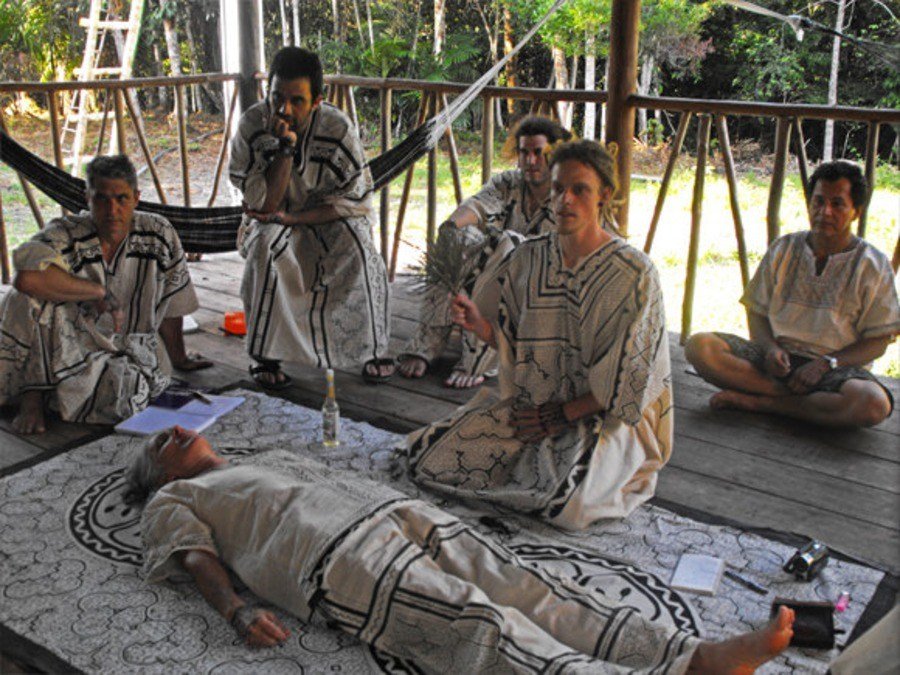 The exact origins of ayahuasca remain unclear, though anthropologists have written that indigenous Amazonian tribes may have consumed ayahuasca as far back as 3000 BC (or even as early as 5000 BC, as it is often marketed to tourists). Written ethnographic accounts extend back to the 19th century. Facebook/Ayahuasca Foundation 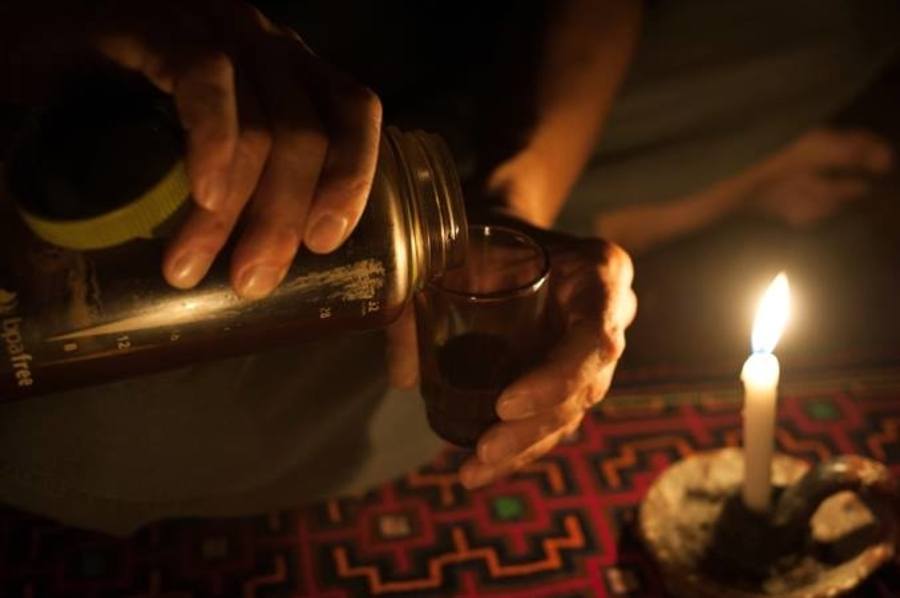 Considered a religious sacrament, many partake in ayahuasca ceremonies for spiritual and physical cleansing. A sensory reaction lasts around four hours, and its side effects include a purge: vomiting, possible diarrhea and, well, the trip itself, which Rick Doblin, the founder of Multidisciplinary Association for Psychedelic Studies in Santa Cruz, Ca. has described as “[having] a sense of inner light in your brain.” Facebook/Medicine Hunter 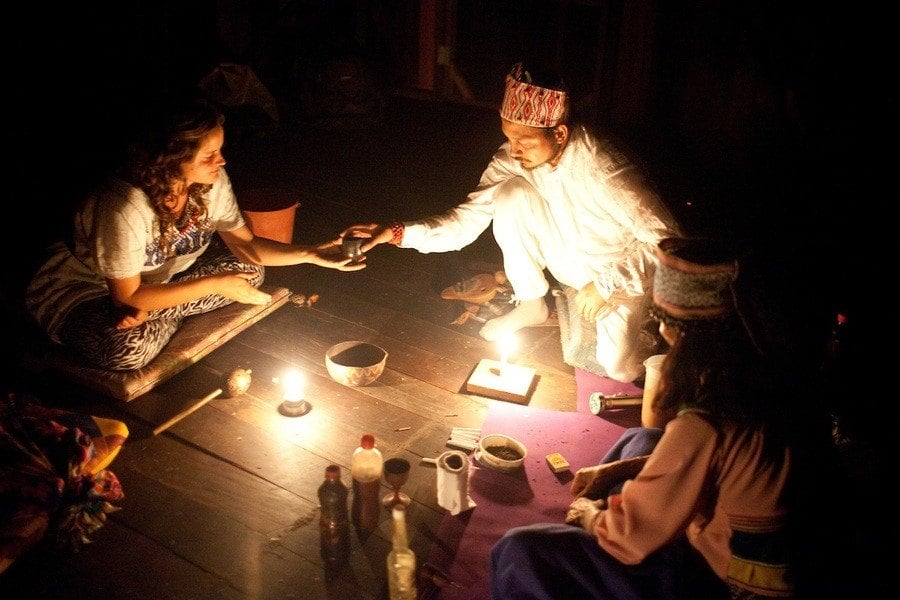 Many tribes view the psychedelic components of the "vine of the dead" as a powerful, natural path to enlightenment. These properties have attracted many Western tourists — perhaps unaware of the vine's sacred history — to ayahuasca in recent years.Swiatoslaw Wojtkowiak 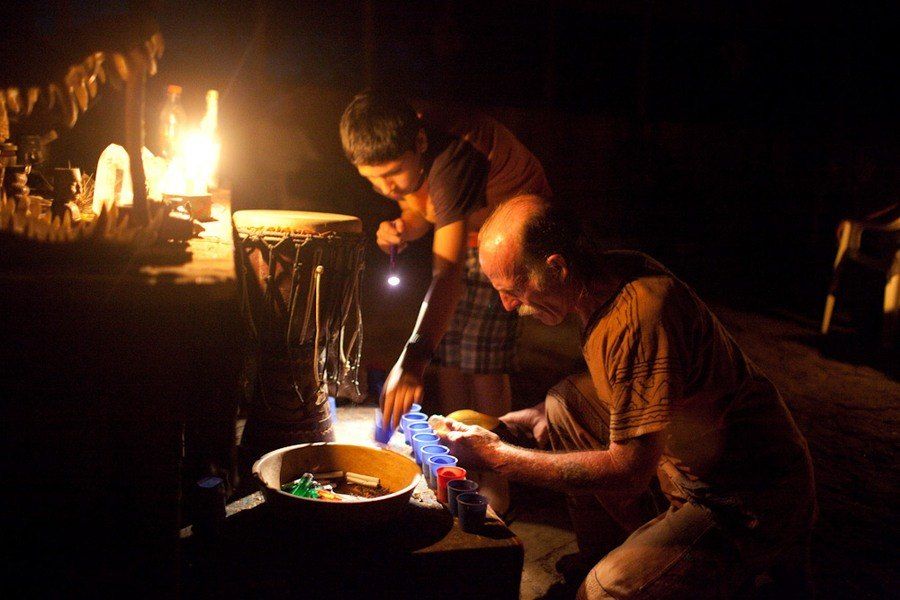 As such, ayahuasca tourism has boomed in the past 30 years. Prices vary according to desired experience: A swanky retreat can cost a couple thousand dollars, whereas a simple ceremony can be as low as $60. Swiatoslaw Wojtkowiak 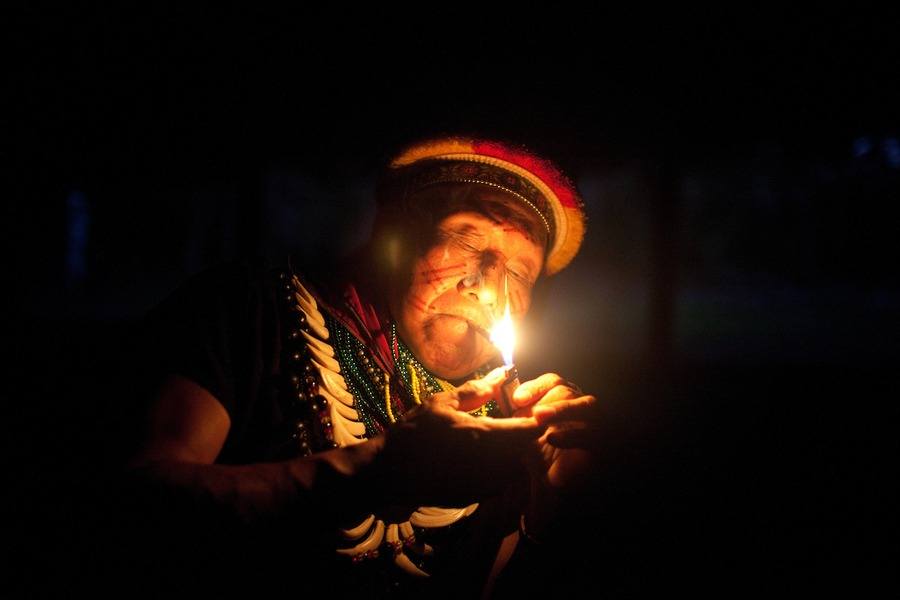 Increased U.S. and European interest in the drug has rendered ayahuasca ceremonies a global phenomenon — specifically among "creative" circles. Still, praise among these types extends as far back as 1953, when William S. Burroughs wrote to Allen Ginsberg about his own ayahuasca experience in Panama. "I experienced first a feeling of serene wisdom so that I was quite content to sit there indefinitely,” Burroughs wrote. Swiatoslaw Wojtkowiak 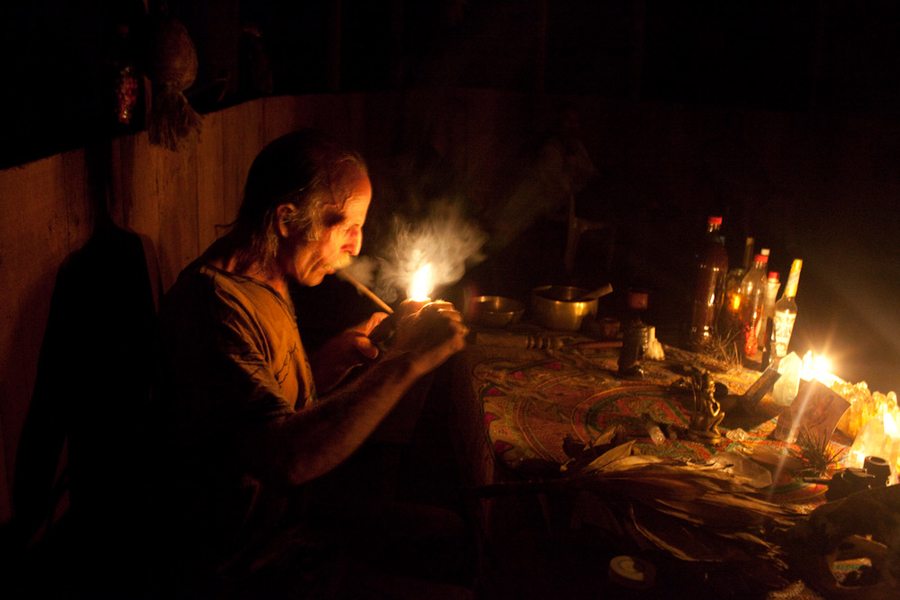 Given the brew's potency and the remote settings in which people often consume it, experts say it's vital to vet ceremony leaders before taking part.

Indeed, some have seized on ayahuasca's popularity and peddle counterfeit drugs, knowing that many won't know the difference. Over the years, individuals have also reported cases of sexual molestation and bad reactions that went unattended as well.Swiatoslaw Wojtkowiak

The role of the shaman 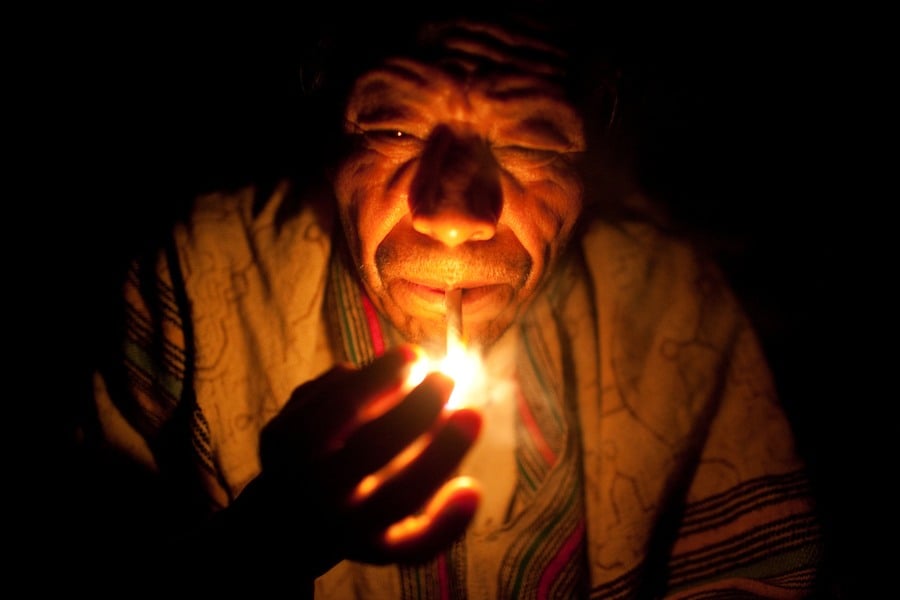 A good shaman, however, will ensure that none of that transpires.

While each shaman has his or her own ayahuasca recipe, in all ceremonies the shaman plays an instrumental part in leading participants into the outer realms and guiding them through a safe journey.

Preparing for the ceremony 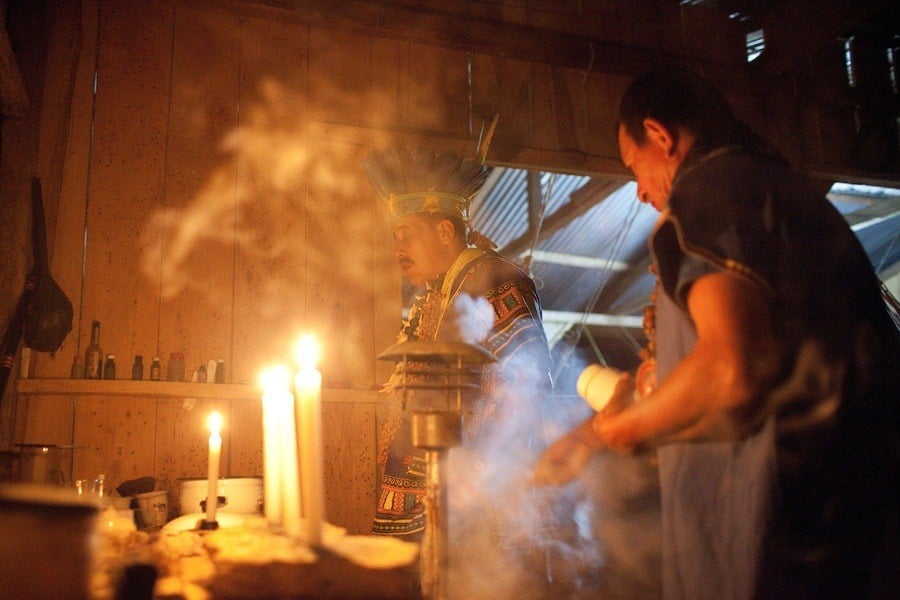 A few weeks before the ceremony, the shaman asks all attendees to go on a specific diet — typically prohibiting caffeine and alcohol — for the brew to take full effect.Swiatoslaw Wojtkowiak 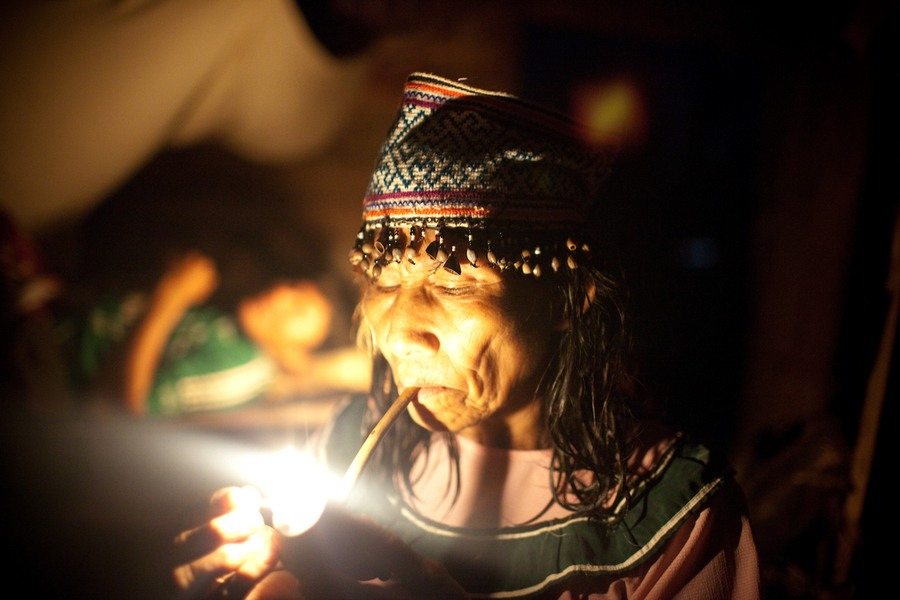 A female shaman from Pucallpa, eastern Peru prepares a session for a sick client.Swiatoslaw Wojtkowiak 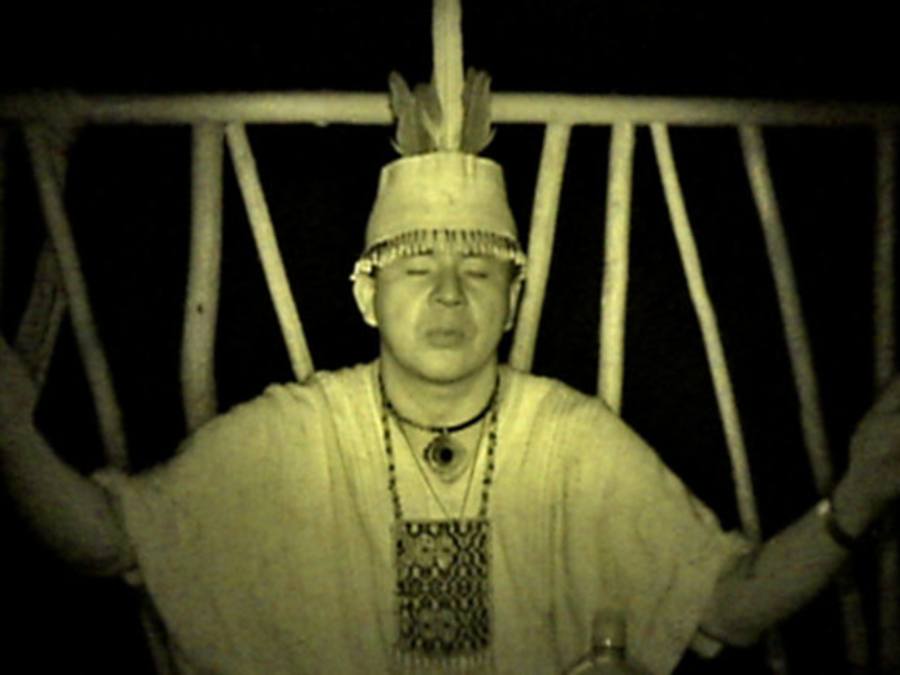 Night footage of a shaman in the midst of an ayahuasca ceremony.Facebook/Ayahuasca Foundation 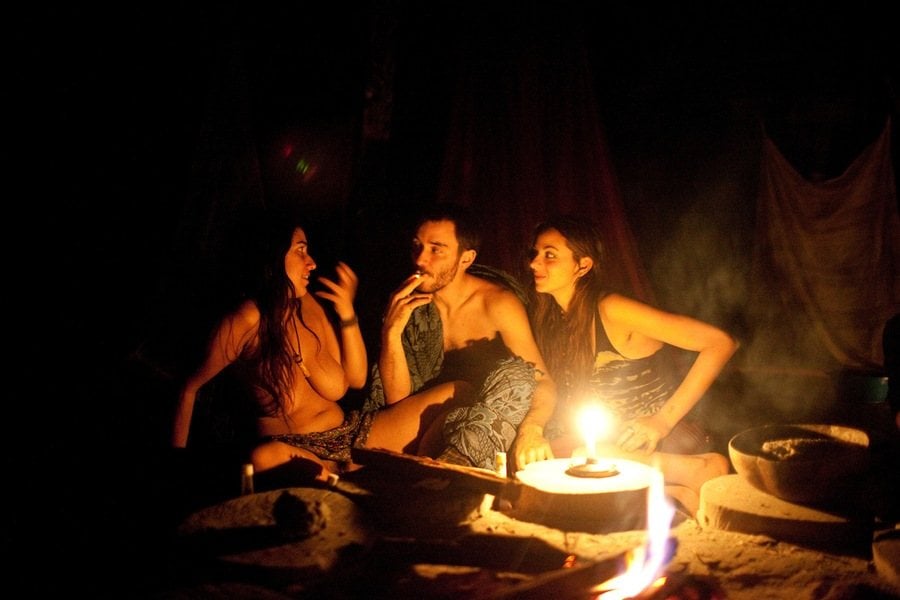 As with the brew, the ayahuasca ceremony itself stimulates the senses, and includes chants, songs, and candles. 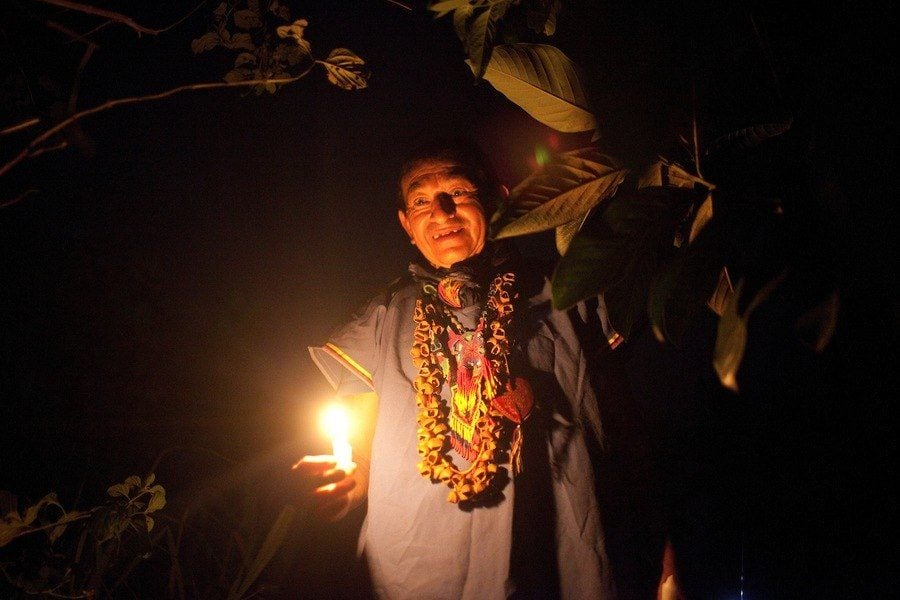 Outside of a sense of "transformation," anecdotal studies have shown that the use of ayahuasca is associated with an increase in serotonin levels.

Ethnobotnist and ethnopharmacologist Dennis KcKenna studied 15 subjects with alcoholism and depression — both connected with deficits in serotonin transporters.

After taking ayahuasca, those subjects reported that they were cured. "Here we have a medicine that apparently reverses these deficits, something no other medicine is known to do," McKenna told L.A. Weekly. "And there's also a correlation to behavioral change. You can't say it caused it, but there's definitely a correlation."Swiatoslaw Wojtkowiak 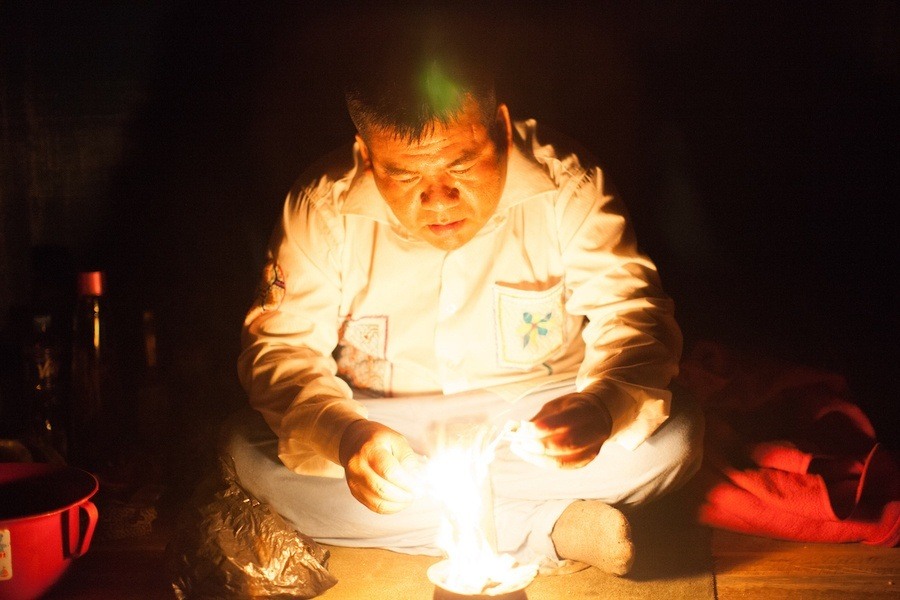 Researchers like McKenna hope to conduct further studies on ayahuasca to determine how, if at all, it may help treat addiction.

This most saliently culminates in the creation of ATOP, or the Ayahuasca Treatment Outcomes Project, which L.A. Weekly describes as “an umbrella over studies in several South American countries, each looking at ayahuasca in the treatment of drug and alcohol abuse.”

"It's real clear that all we have now is kind of anecdotal evidence, and small studies with short-term follow-up," Dr. Brian Rush, who set up the crowdfunding campaign for ATOP, told L.A. Weekly. "This is a potential approach that a lot of people have some confidence in, and at least enough confidence to say, 'We need more studies. We need to know more.’”Swiatoslaw Wojtkowiak 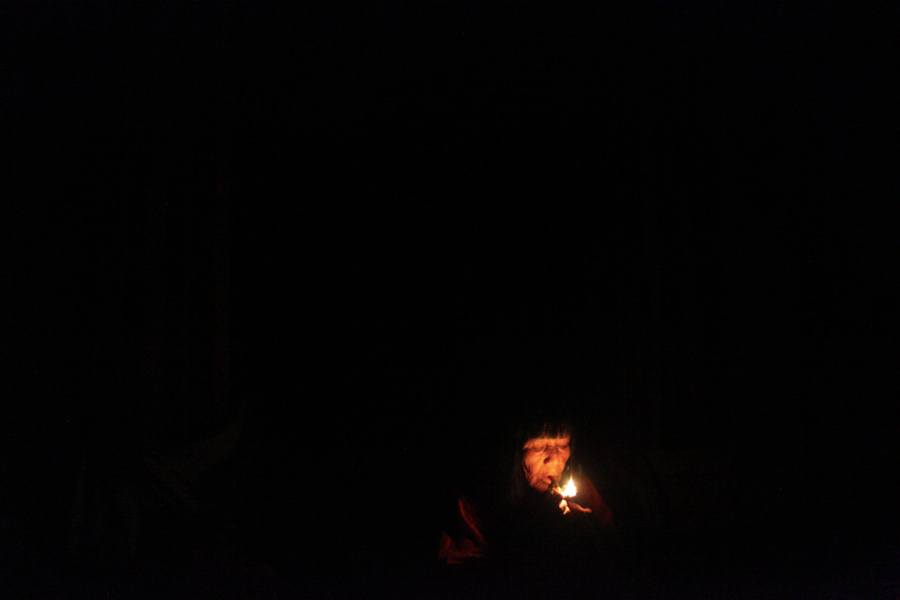 The potent Amazonian brew known as ayahuasca has recently taken the West by storm. Hipsters, bobos, and yogis all now seek the psychedelic drug in warehouses and retreats from New York to Berlin. Some adventurers and purists even travel to the depths of the Peruvian jungle to retrieve it.

It's no wonder why: users describe ayahuasca as the purest trip of all, one which proponents say yields about ten years of therapy in the span of a few nights. So what do these trips look like, and how is ayahuasca prepared? Take a look in the above gallery to find out.

For more on hallucinogens' potential for good, check out some of the world's best drug-induced discoveries. Then, read up on 14 famous people you had no idea were avowed illegal drugs advocates.