The pantheon of horrid art restorations has a new contender: this 1923 carving in the Spanish town of Palencia. 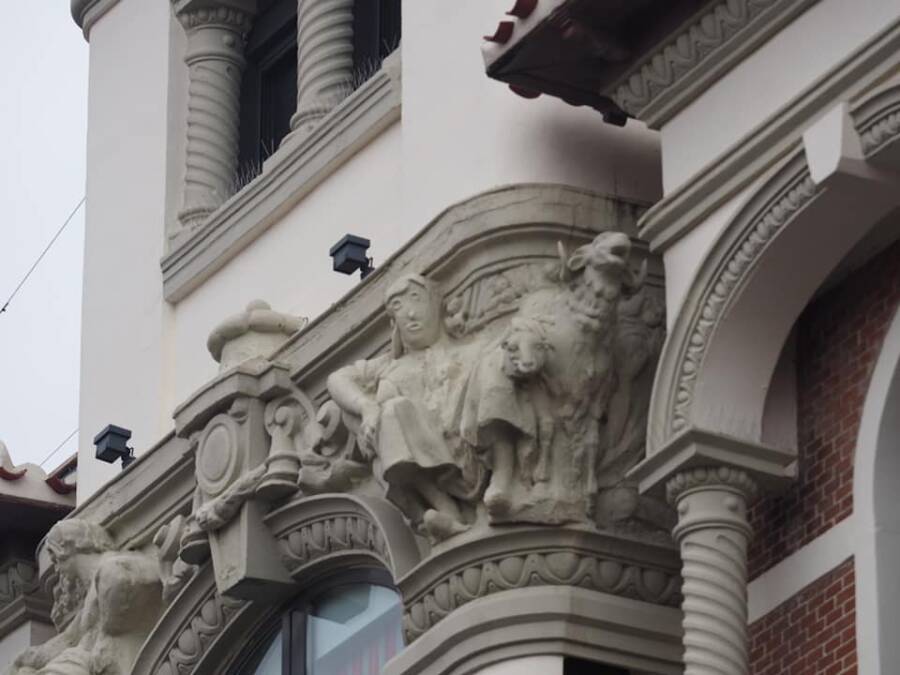 FacebookThe sculpture was originally unveiled in 1923 and now appears to be permanently disfigured.

Maintaining historic landmarks and invaluable works of art is an important method of preserving the past, and a recent attempt to do just that in Spain has rendered one vintage statue completely unrecognizable.

According to NPR, amateurs in the town of Palencia were commissioned to fix the broken head of statue familiar to all 78,000 residents — and utterly failed. The carving, which once depicted a smiling woman frolicking in a country scene, now looks like only a vague representation of a human.

The statue in question was originally unveiled in 1923 and has adorned part of the facade of a local bank ever since. But what was once an admittedly old carving in need of professional restoration is now something else entirely: a melted face with a lump for a nose, open mouth, and bizarrely placed eyes. Indeed, some are referring to the botched job as a “potato head.”

“It looks like the head of a cartoon character,” local artist Antonio Guzmán Capel wrote. He also published photos of the disaster online — which have since gone viral. 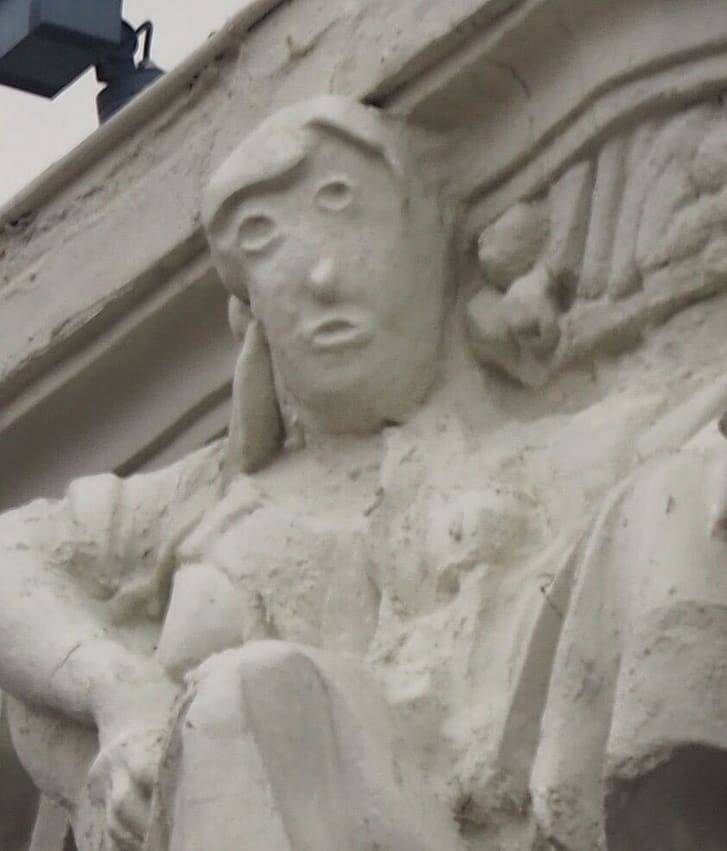 FacebookLocals and experts alike are flabbergasted as to why those in charge would hire amateurs.

With the statue rendered nearly unrecognizable, Capel’s post has drawn local anger and online ridicule. Capel told NDTV that it is not the artist who accepted a potentially lucrative job that is at fault, but rather those who commissioned that artist in the first place.

“I don’t understand why they allow it,” he said. “It doesn’t seem normal to me.”

Unfortunately for the commissioners, it isn’t just local townsfolk and virtual onlookers with no artistic expertise who are angered by the shoddy job. Having gone viral online, Spain’s Professional Association of Restorers and Conservators (ACRE) have chimed in as well, tweeting:

“THIS #IsNotARestoration. It’s a NON-professional intervention.”

According to CNN, Capel lives right across the street from this disfigured statue and he said that crowds have gathered there on a daily basis to gawk at the desecrated piece. 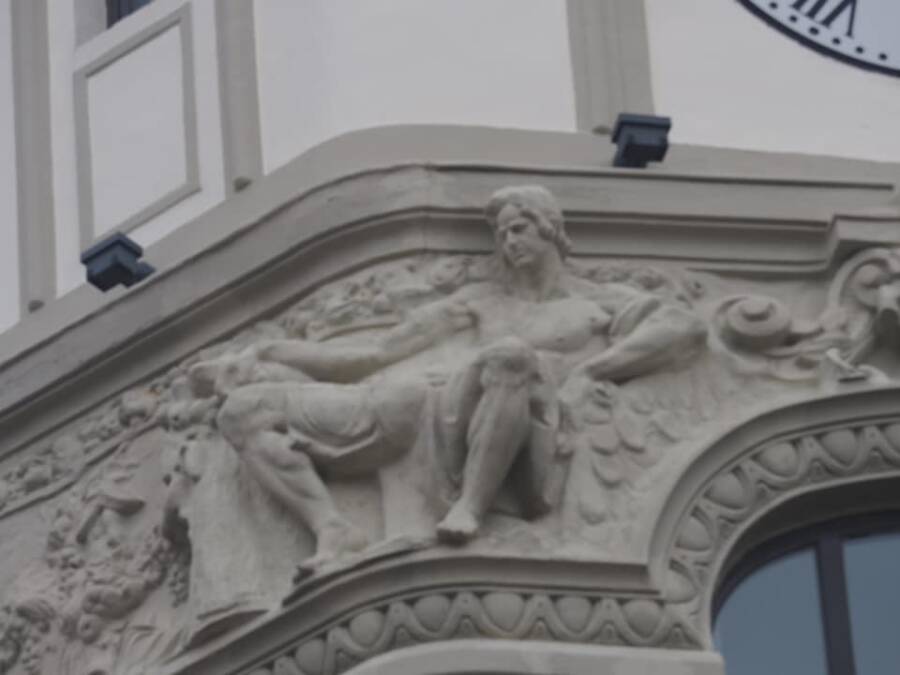 FacebookLocal artist Antonio Guzmán Capel posted a photo of an adjacent carving to clarify just how botched the restoration job really was.

Ultimately, the unseemly sight at 9 Calle Mayor in Palencia, Spain has merely joined a long list of comparable mishaps in the art world. That pantheon includes the 2012 repainting of a fresco of Jesus from the 1800s. Restored by an 81-year-old church member named Cecilia Jimenez, the end result has since been dubbed “Monkey Christ.”

Jimenez asserted that the church parishioner had authorized her repainting, which circles back to Capel’s point that the commissioners ought to take more responsibility for who they hire to do these restoration jobs in the first place.

In a strange twist of fate, however, Jimenez’s botched restoration has become an unlikely hero in the town of Borja, where the painting resides. While initially criticized far and wide, “Monkey Christ” has nonetheless drawn unprecedented tourism to the town of Borja, specifically because of the viral outrage and humor it originally caused.

Other notable restoration fiascos include the repainting of a 15th-century sculpture of the Virgin Mary, baby Jesus, and St. Anne. Made out of wood, the Romanesque statue was naturally brown and was bizarrely repainted in jarring hues of pink and neon green. Not unlike this latest incident, that job was done by a local with obviously questionable expertise. 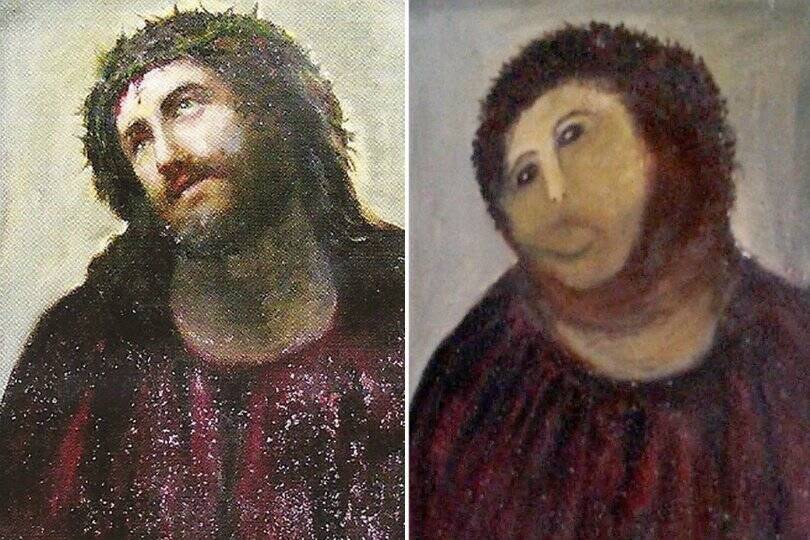 As it stands, there appears to be no public relations strategy in place to quell local frustrations at this time. Whether the carving will remain as it is now or be restored yet again remains unclear. Additionally, the person or persons responsible for the restoration remain unidentified.

The president of ACRE, Maria Borjas, lamented that botched restoration jobs are more common than one might hope. “Spain’s cultural heritage is in a fairly vulnerable situation,” she warned.

Hopefully, for the sake of virtually every single person involved, professionals will be hired the next time around.

After learning about the botched restoration of a statue in Palencia, Spain, read about the failed restoration that left a famous painting of the Virgin Mary unrecognizable. Then, learn about the Rembrandt painting that was initially deemed fake but has since been reconsidered by experts.