A private art collector said they paid a furniture restorer $1,350 to clean up a copy of a 17th-century artwork by Bartolomé Esteban Murillo. 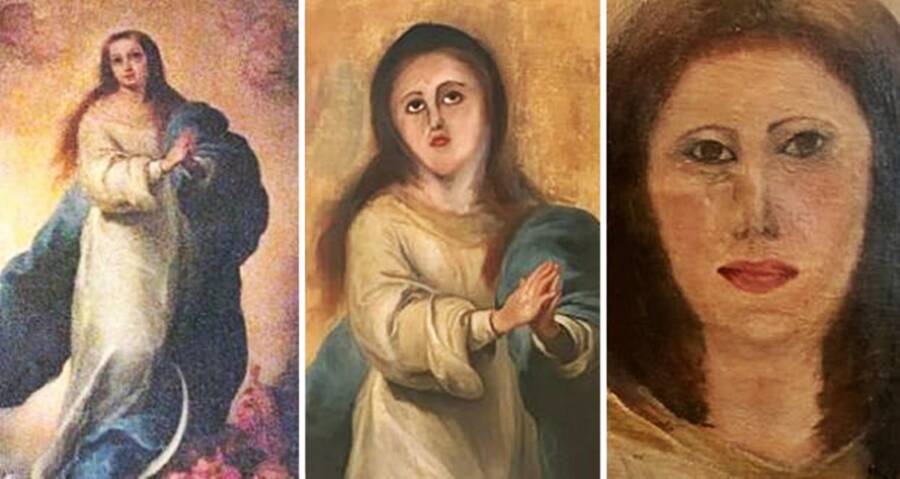 Public Domain/Private Collection/Europa Press 2020The Virgin Mary figure on a copy of a 17th century painting was destroyed after two failed restoration attempts.

Art experts are calling for a reform of current Spanish laws after a disastrous restoration job left a painting of the Virgin Mary’s angelic countenance completely distorted.

According to the Guardian, an unidentified private art collector in Valencia was charged 1,200 euros or $1,350 by a furniture restorer who claimed they could clean and restore the collector’s copy of the Immaculate Conception of Los Venerables.

The original artwork was created by baroque artist Bartolomé Esteban Murillo, who was a famous artist of the 17th century.

Unfortunately, the restoration job was a complete failure. After the first failed attempt, the same amateur restorer tried to fix it — only to make it worse.

The Immaculate Conception painting, in its rightful form, is a full-body portrait of the Virgin Mary dressed in a white and blue robe standing atop a cloud with a pack of little angels at her feet. As she gazes up toward the heavens, Mary wears a hopeful look on her delicate-featured face. 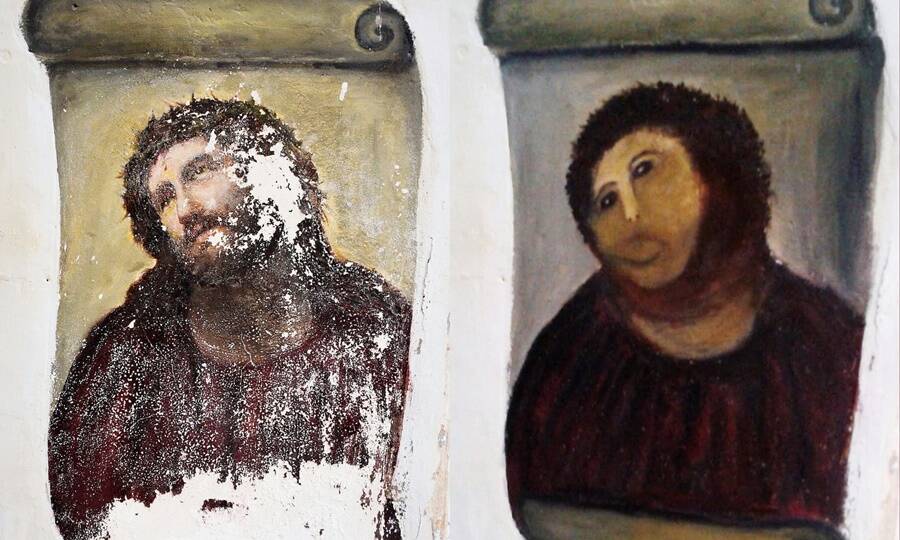 APBefore and after of the distorted Jesus painting infamously known as ‘Monkey Jesus.’

After the botched restorations, however, the Virgin Mary was rendered unrecognizable. After the first attempt, Mary had lost all detail in the tendrils of her hair, and the contours of her face had morphed to resemble the ghostly figure in The Scream. Worst of all, her facial features had gone flat.

After the second try, her face was completely changed again, except this time her face looked quite demonic. It’s unclear why the private art collector had entrusted their art piece to an amateur restorer — or why they let them “restore” it again for the second time — but, according to art experts, this kind of debacle is unfortunately not uncommon in Spain.

Fernando Carrera, a professor at the Galician School for the Conservation and Restoration of Cultural Heritage, said the case was more proof that art restoration should only be legally allowed to be carried out by properly trained art restorers.

While those might be extreme examples, Carrera admitted, the point stands that Spain’s law needs to ensure that art restorations are properly carried out.

“I don’t think this guy — or these people — should be referred to as restorers,” he continued. “Let’s be honest: they’re bodgers who botch things up. They destroy things.”

As it turns out, current Spanish laws regarding art restoration don’t require projects to be performed by certified or trained art restorers, meaning anyone with cleaning utensils is legally allowed to ‘spruce up’ an art piece. This is especially troublesome for a country with such a rich history of art spanning centuries. 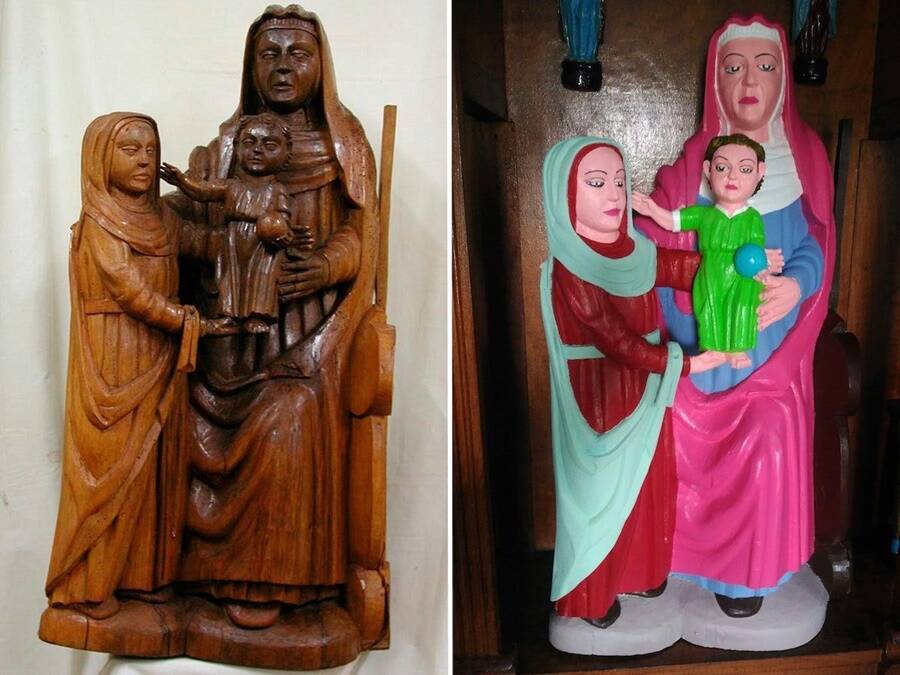 DSF/AFP/Getty ImagesBefore and after of the failed restoration of the Figures of Rañadoiro sculpture in 2018.

Because of this loophole in Spanish law, María Borja, a vice president of the Association of Restorers and Conservators (ACRE) called the restoration an act of vandalism and said that such incidents were much more common than people think.

“We only find out about them when people report them to the press or on social media, but there are numerous situations when works are undertaken by people who aren’t trained,” Borja told Europa Press which was the first to break the news of the disfigured Virgin Mary before it went viral around the globe.

Other cases of art restoration works gone terribly wrong include the hack job on the Figures of Rañadoiro which rendered the 15th century art piece into an ugly Christmas ornament in 2018 and the failed restoration of the La Dolorosa de Arucas sculpture just recently in June 2020.

The most famous example is the unfortunate damage done to a century-old painting of Jesus Christ in a tiny chapel of the Sierra de Moncayo in northeastern Spain in 2012.

The distorted Jesus eventually turned into an endearing symbol of religious devotion due to its elderly restorer, but it first became infamous as “Monkey Jesus” and “Potato Jesus” because of its undiscernible shape.

Hopefully, after this “Demonic Mary” situation there will be some action from the higher powers of Spain.

Next, learn how a priceless 17th century Caravaggio painting was found behind mattresses in an old French attic and read the story of a painting left inside a closet for decades that turned out to be worth millions.