Palmares, The Lost Kingdom Of Runaway Slaves In The Brazilian Amazon

For nearly a century until 1694, thousands of enslaved Africans escaped from Portuguese plantations to the rebel kingdom of Palmares, where fugitives ruled. 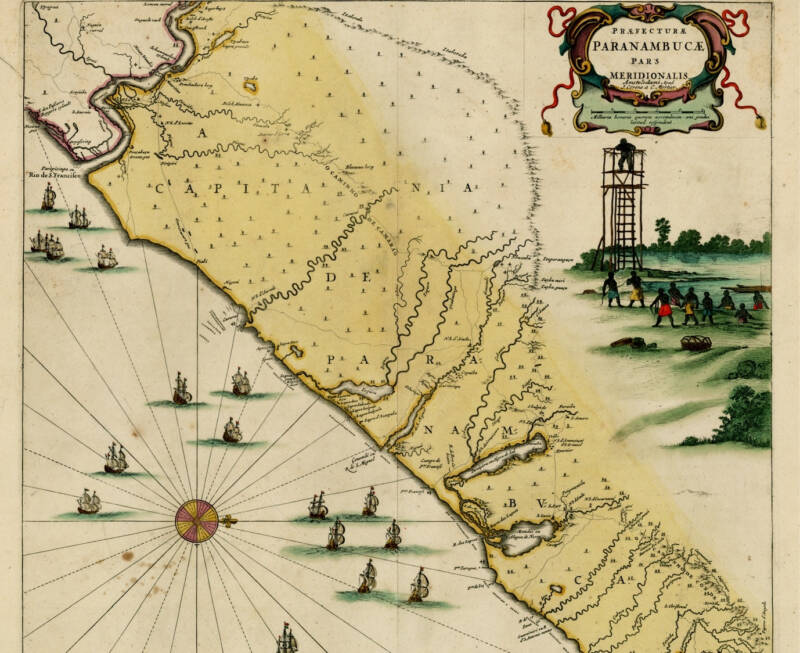 Wikimedia CommonsIn this 1647 map of the Brazilian state of Pernambuco, the Palmarians are represented in the right corner.

For over three centuries, millions of Africans and their descendants were held in captivity throughout the Americas and forced to provide the labor that would generate vast fortunes for their captors.

Yet in each of these places existed maroons or rebel communities of those fortunate and resourceful enough to escape.

The largest and most powerful of these was Quilombo dos Palmares, which had a population of 30,000 at its height. But for a twist of fate, this coastal Brazilian kingdom might have led history in a wildly different direction.

The Grim Origins Of Brazilian Slavery 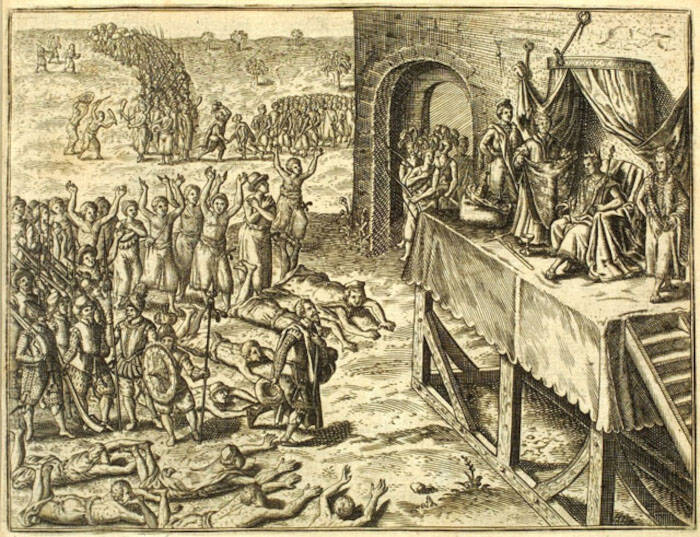 Wikimedia CommonsA 16th-century depiction of the court of the King of Kongo, a powerful Central African state whose defeat heralded a new wave of terror in slavery.

Back in the 16th century, Brazil was dotted with a string of Dutch and Portuguese settlements along the Western Atlantic coast. Portuguese explorers, in particular, laid claim to vast swathes of land containing valuable brazilwood, sugar cane, and fertile soil.

After unsuccessful attempts to force local Indigenous peoples to work for them, the Portuguese came up with a cheaper, more nightmarish solution — and abducted thousands of Africans from the Lower Congo region of today’s Democratic Republic of the Congo and Angola.

But in 1665, the Portuguese went to war with the Kingdom of Kongo, their main rival in southwest Africa. At the ensuing Battle of Mbwila, the Kongolese were badly defeated, and their king was decapitated on the field.

Among those captured that day were Aqualtune, a warrior princess who’d commanded thousands of troops, and her son, a mysterious figure later known only by his title, Ganga Zumba, or “great lord.”

Both were sent to Brazil. Aqualtune was subjected to the grotesque role of breeding, and her son was to be a laborer. Their harrowing story was just another example of the perils of life in slavery.

The Rise Of Quilombo Dos Palmares 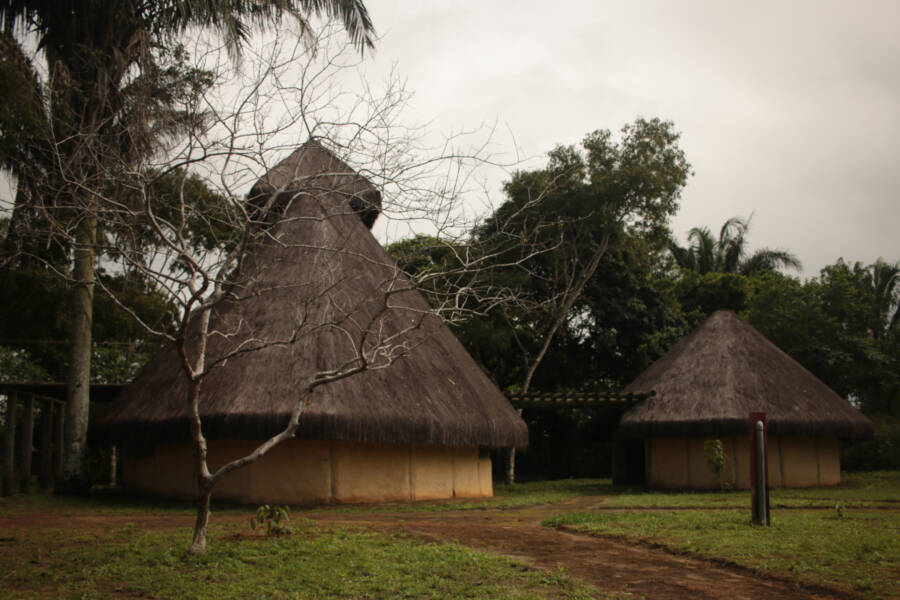 Wikimedia CommonsA reconstruction of the administrative buildings of Palmares, where Ganga Zumba’s ministers carried out his orders and where local leaders met on important occasions.

As the Dutch and the Portuguese warred over territories in Brazil, it gave many African captives the chance to escape the plantations in the confusion. This is exactly what happened in the coastal region of Pernambuco.

These refugees soon established independent villages in the jungle, known as quilombos or mocambos, and formed governments based on those they’d known in Africa.

Palmares was the largest confederation of mocambos, founded around 1605 and immediately viewed as a threat by the Europeans who called it a “great calamity” and “a serious danger.”

Although at first the people of Palmares “lived by a species of banditry, robbing the whites whenever they could,” they soon settled into a more traditional lifestyle like that which they’d been taken from.

When Aqualtune and her son escaped to the settlement, their royal backgrounds impressed the inhabitants enough for the son to be elected Ganga Zumba around 1670. He was installed in the Macaco, the royal capital, and protected by high wooden walls and a devoted army of disciplined warriors.

Surrounding the capital Ganga Zumba now ruled was a bustling town of some 1,500 houses, a church, and vast fields used to grow vegetables and fruits of every variety.

Palmares’ population was as diverse as the colony surrounding it, with Africans and their descendants, local natives, and other marginalized peoples, like Jews and Muslims, who’d been forced to labor in Brazil. Allied with nearby Indigenous tribes, Palmares raided nearby plantations to free slaves and capture weapons.

They were so successful that what began as a small outpost of a few dozen escapees flourished into an independent state of some 11,000 to 30,000 people. 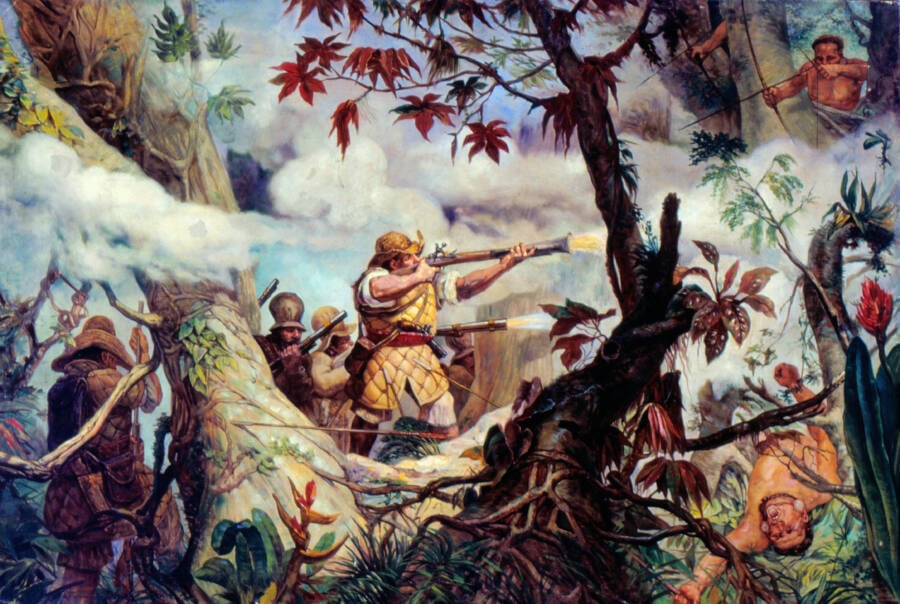 Museu Paulista/Wikimedia CommonsIn more than 20 attacks over nearly a century, the Portuguese attempted to destroy Palmares and return its inhabitants to slavery.

Portuguese colonizers knew only too well that the existence of quilombos like Palmares would give captives hope and encourage further escapes and acts of rebellion. As long as the quilombos defied slavers and offered refuge to the enslaved, the Portuguese worried that “no settler will have his slaves secure.”

For that reason, Europeans launched numerous military campaigns against Palmares, at times as often as once a year, as they sought to destroy the budding kingdom and return its inhabitants to bondage.

Each time, Palmares’ warriors defeated their attackers, but by Ganga Zumba’s reign, the constant wars were becoming a severe burden given Portugal’s far greater resources.

Desperate for peace, Ganga Zumba tried to negotiate a truce with several colonial governors and even offered to return recent fugitives in exchange for an oath of loyalty to the Portuguese crown.

Although a peace treaty was signed in 1678, the colonists quickly went back on their word and resumed their attacks. Meanwhile, Ganga Zumba’s nephew, Zumbi, criticized his uncle’s willingness to trust the Portuguese and leave their fellow people in chains. Zumbi poisoned his uncle, assumed the throne, and vowed to continue the war for Palmares’ independence.

King Zumbi’s War Against The Portuguese 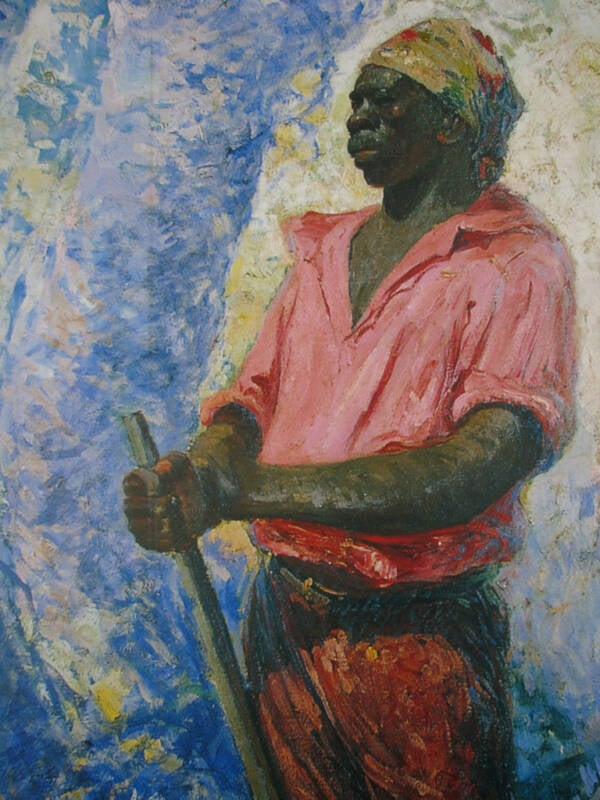 Museu Antônio Parreiras/Wikimedia CommonsZumbi was 25 years old when he overthrew his uncle to become ruler of Palmares, and he soon established a reputation as a fierce military leader.

Zumbi’s ferocity and skill in battle allowed the kingdom to hold out for years and made him a hero in the eyes of the Palmarians. But even his battle-hardened warriors were no match for the wealth of the Portuguese empire.

Over the 15 years of Zumbi’s reign, Portuguese attacks grew more frequent and more violent as they slowly encircled and shrank Palmares’ borders.

The most ferocious fighters for the colonial government were Bandeirantes, professional slavers, soldiers, and explorers who staged raids in neighboring territories to bring back further captives. Funding for these wars may have reached nearly 500 million in Portuguese reals, which is the equivalent to the revenues of half of Brazil.

With their coffers straining under the burden, the Portuguese planned a final, desperate attack in February 1694.

Under the command of the notorious Bandeirantes, a 6,000-strong army of colonists and Indigenous allies equipped with artillery laid siege to the fugitive city. This time, the Palmarians were overwhelmed, with 200 killed in battle, 500 captured, and another 200 allegedly committed suicide rather than return to slavery.

With his forces defeated and his capital destroyed, a wounded Zumbi escaped but was betrayed by a former friend and captured. On Nov. 20, 1695, he was decapitated and his head displayed in the slave port of Recife.

After nearly a century, Quilombo dos Palmares, the only African kingdom of fugitive slaves in the Americas, was no more. 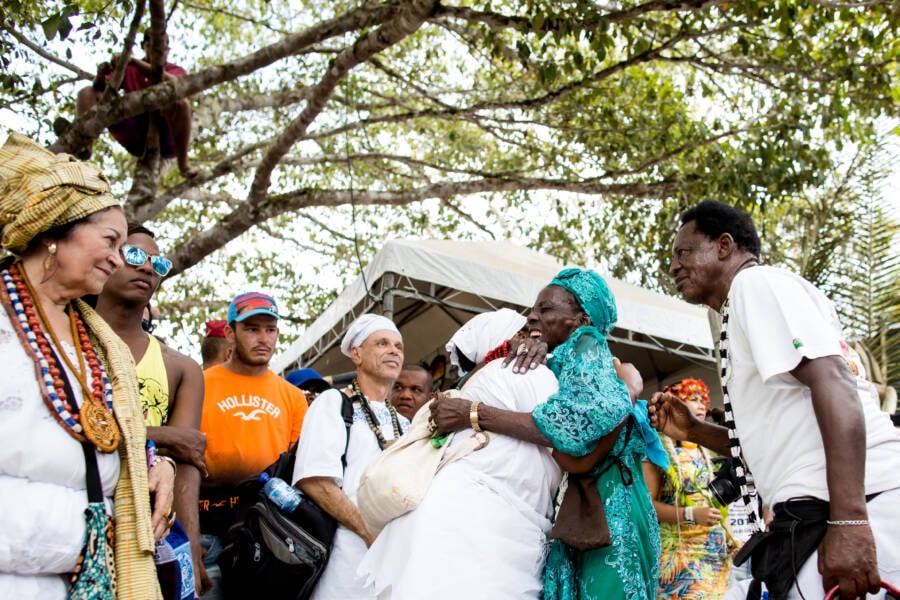 Ministry of Tourism, BrazilToday, millions of Afro-Brazilians look to Zumbi and Palmares as a source of pride, celebrating them on the anniversary of Zumbi’s death every year.

Although the settlements of Palmares were wiped out and the inhabitants cruelly returned to slavery, the legend of the kingdom was a powerful symbol. As late as 1746, Afro-Brazilians continued to flee to the site of the Macaco to escape from captivity. Slavery lasted until 1888 in Brazil, the last country in the Americas to abolish the practice.

In recent years, the legacy of Quilombo dos Palmares has enjoyed a resurgence as modern Afro-Brazilians look to it as a symbol of defiance against a brutal and dehumanizing social order.

In 2003, November 20, the day of Zumbi’s death, was declared the National Day of Zumbi and Black Consciousness. Palmares, Ganga Zumba, and Zumbi have been celebrated in films and pop culture, and a museum has been established on the site of the Macaco to share knowledge of its history ever since.

Although the remarkable rebel kingdom was doomed in the face of colonial power, it left a lasting impression on millions of Black Brazilians determined to reclaim and honor their defiant heritage.

After reading about the defiant kingdom of Palmares that rebelled against Portuguese slavery, learn about the Underground Railroad, the effort of a few dedicated abolitionists to ferry Black Americans out of slavery. Then, read the true story of the Confederados, the Confederates who fled the aftermath of the American Civil War in hopes of preserving slavery in Brazil.