Inside Pamukkale And The Mystical ‘Cotton Castle’ Healing Pools Of Turkey

Filled with calcium-coated cliffs and mineral pools, Pamukkale is a UNESCO Heritage Site in southwestern Turkey that attracts hundreds of thousands of visitors a year.

In the picturesque southwest region of Denizli, Turkey, there lies a steep valley with hillsides lined with rows of shimmering white stone steps — and an incredible 2,000-year legend. Welcome to Pamukkale.

Pamukkale, The Cotton Castle Of Turkey 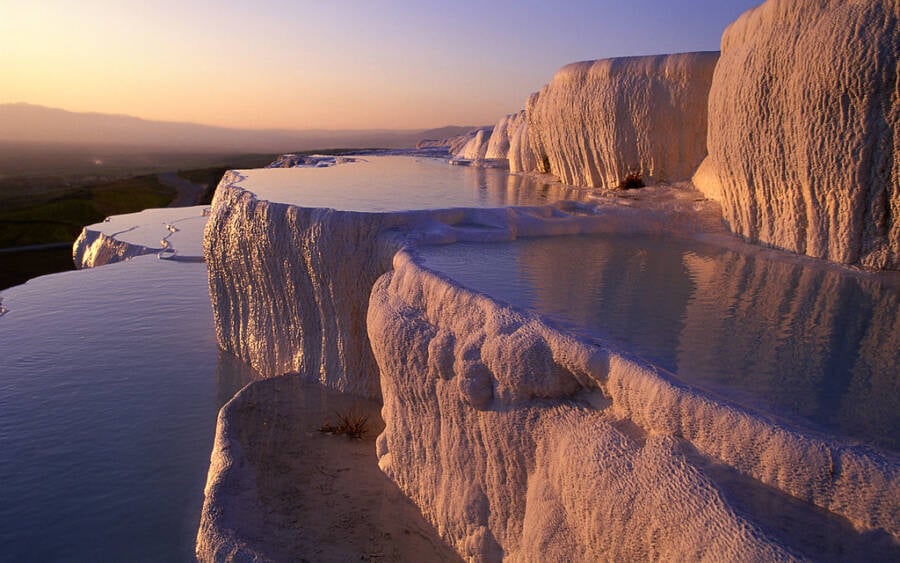 Three hundred meters below the surface of the Anatolian plateau, in roiling subterranean caves, mineral-laden water bubbles. So far down, the earth is hot — volcanic activity in the region and a nearby fault line make sure of that.

From caves heavy with noxious carbon-dioxide gas, the hot water bubbles up through the cliffs overlooking the plains of southwest Turkey.

There, spectacularly displayed against the sky, it collects in a series of 17 terraced thermal pools, bringing the heat of the underground with it. Pools range in temperature from a pleasantly toasty 95 degrees to boiling. 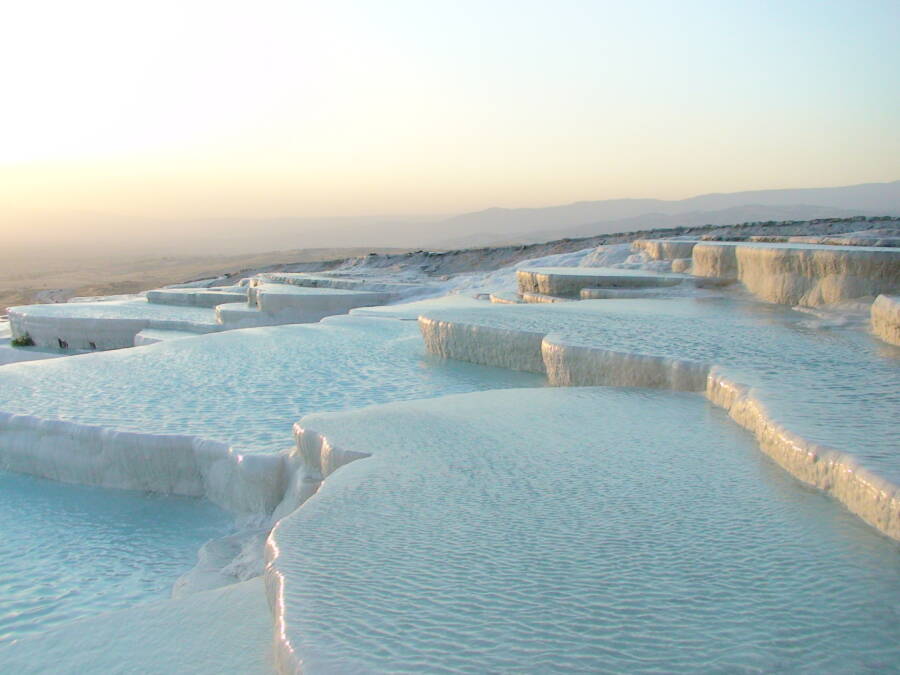 But heat isn’t all the water carries with it from down below. It also contains a mixture of the minerals it is steeped in: bicarbonates, colloidal iron, and, most importantly, calcium carbonate.

It’s the latter that has forever changed the landscape. As heat and carbon dioxide rise from the steaming pools, the water leaves behind calcium carbonate deposits that harden first into gel and then into a strange, almost stringy-looking white stone called travertine. 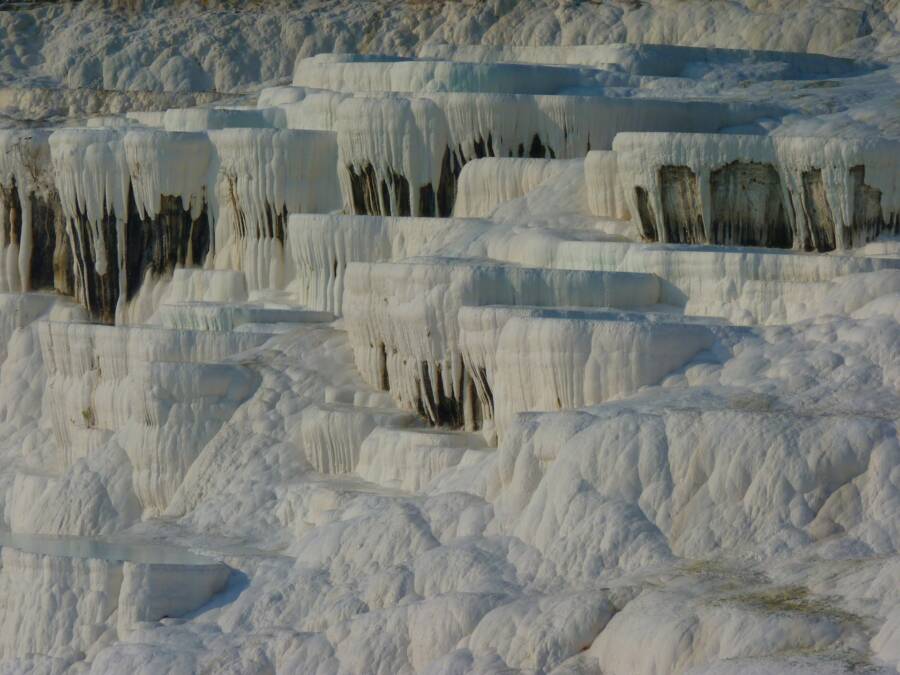 PixabayThe travertine stalactites hang down the terraces of Pamukkale’s thermal pools like shreds of cotton.

Shimmering travertine covers every inch of the terraces, visible from the plains more than ten miles away. It drips down the cliffs and between pools like candle wax — hanging like long shreds of cotton. 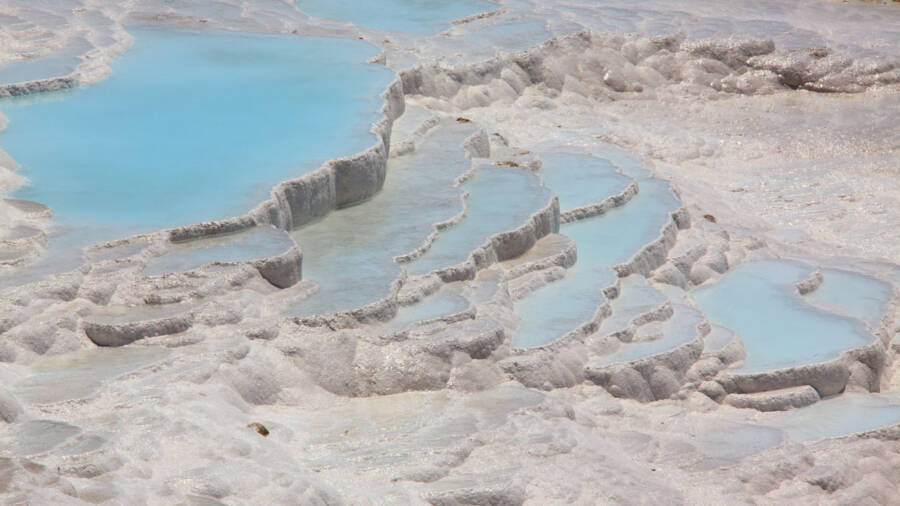 For many who visit, these hot springs are an eighth wonder of the world — and they’re not the first to think so.

Long before it was a cotton castle, Pamukkale was Hierapolis, a holy city. The magnificent pools are surrounded by Greek ruins that date back more than 2,000 years. And hidden in the remains of that city are whispers of strange, sometimes sinister stories.

The Bizarre Legends Behind Pamukkale 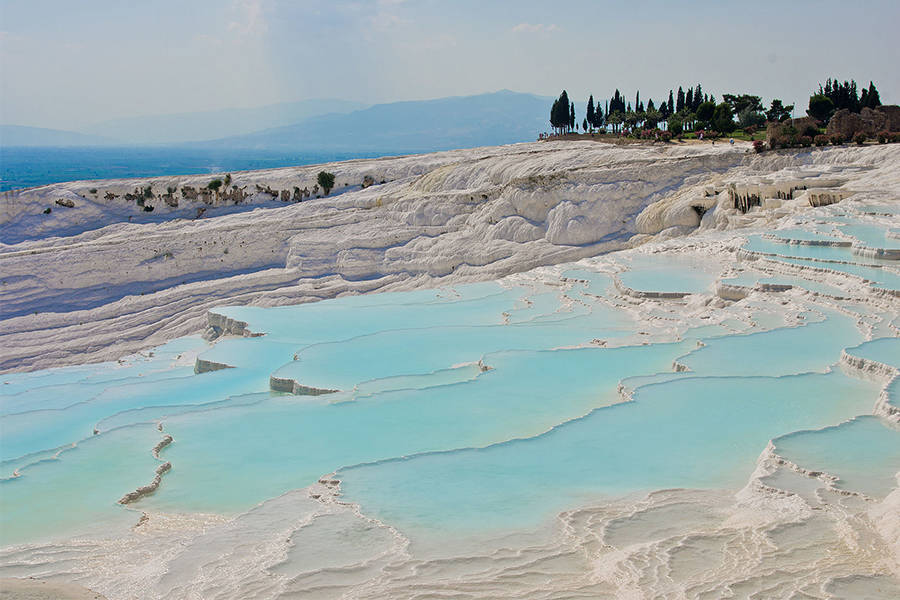 Wikimedia CommonsThe turquoise pools on the terraced steps of Pamukkale.

Pamukkale’s thermal pools have always had one foot in the door of myth and legend.

Some of the stories told about the hot springs are whimsical, like the tale of giants who used to do their laundry in the pools of Pamukkale — until one day they vanished, leaving their cotton to dry in the Anatolian sun forever.

Others spin a Turkish Cinderella story, remembering a poor, plain girl who threw herself into Pamukkale to drown — then discovered that the warm waters had made her beautiful. She was rescued from her desperate attempt by a passing lord, who promptly married her and bore her off to a happily ever after. 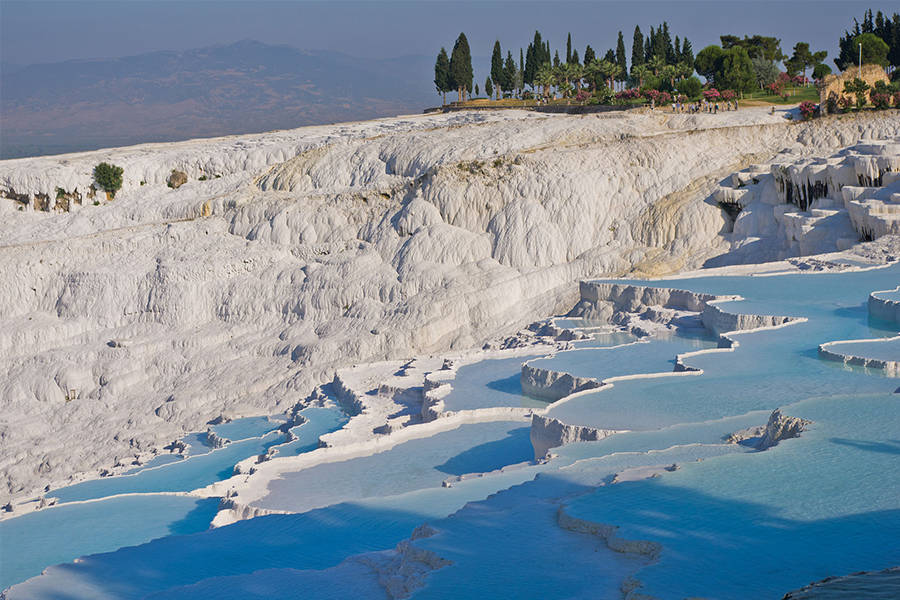 Wikimedia CommonsThe pools with the cotton-like formations of rock in the background.

Her tale harkens back to an ongoing mythology: to this day, many of the locals swear that the pools have curative properties and that bathing in them, even briefly, can do wonders for all kinds of ailments (though the science-minded remain skeptical).

But there is no story as strange as the one that played out 2,000 years ago, when the Galli, the eunuch priests of Hierapolis, discovered a mysterious cave below Pamukkale’s pools. 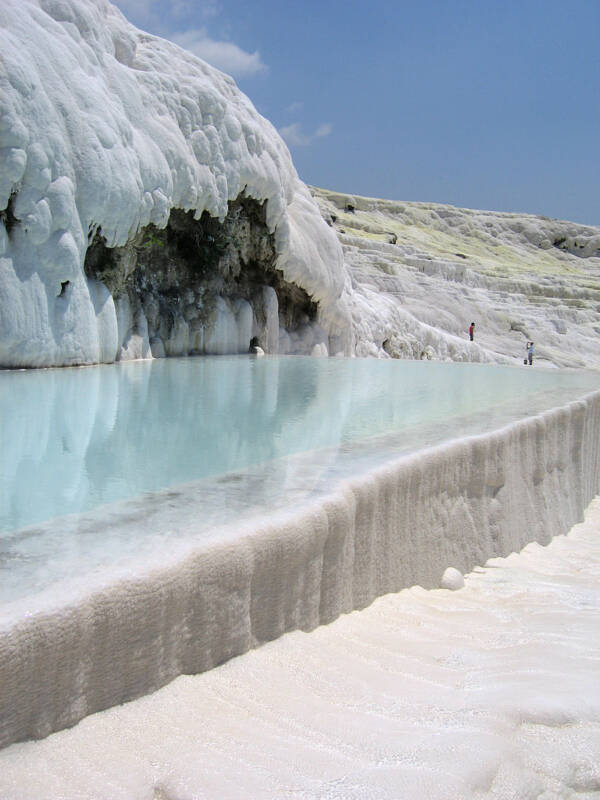 The grotto was dim, perpetually shrouded in fog so thick that it was almost impossible to make out the floor. And any animals that the priests brought into it grew weak and died on the spot.

The priests, having survived the trip into the cave, surmised that it must be the mouth of an entrance to the underworld and that they, as the gods’ representatives, had been granted divine protection.

It became a show: they would lead sacrificial bulls into the cave, which they named the Ploutonion after Pluto, the Greco-Roman god of the underworld. The big animals would inevitably fall, struck down, while the priests emerged unharmed to accept the cheers of the waiting crowd.

The Mystery Of The Cotton Castle Is Solved 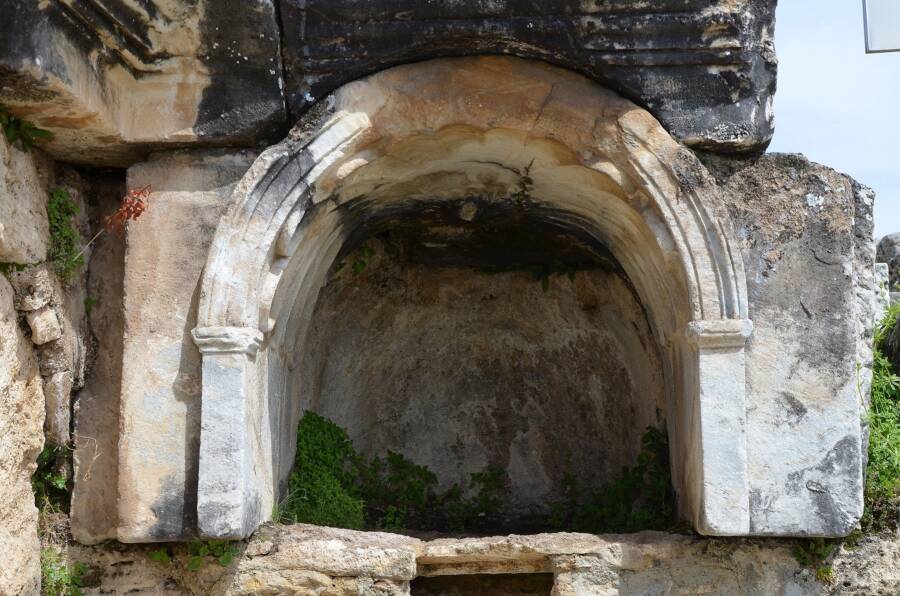 Flickr / Carole RaddatoThe entrance to the Ploutonion, thought to be the mouth of a gateway to the underworld.

The mystery of the Ploutonion has been largely solved by modern archeologists, who, after watching several birds die in its entrance, realized that Pamukkale’s rich reserves of carbon dioxide were to blame.

The mist that haunted the cavern was indicative of a veritable wellspring: as the heavier gas, the carbon dioxide pooled near the floor of the cave, leaving a layer of oxygen above it.

The bulls the priests led into the cave — and the other small creatures the crowd was encouraged to pitch in as their own experiment — all had their heads lower to the ground than their human companions.

Cybele’s priests, however, weren’t quite as unaffected as they would have had the masses believe. The Greek historian and geographer Strabo visited around the turn of the millennium, and he observed that the Galli took an interesting precaution:

The Galli, who are eunuchs, pass inside with such impunity that they even approach the opening, bend over it, and descend into it to a certain depth, though they hold their breath as much as they can (for I could see in their countenances an indication of a kind of suffocating attack, as it were). 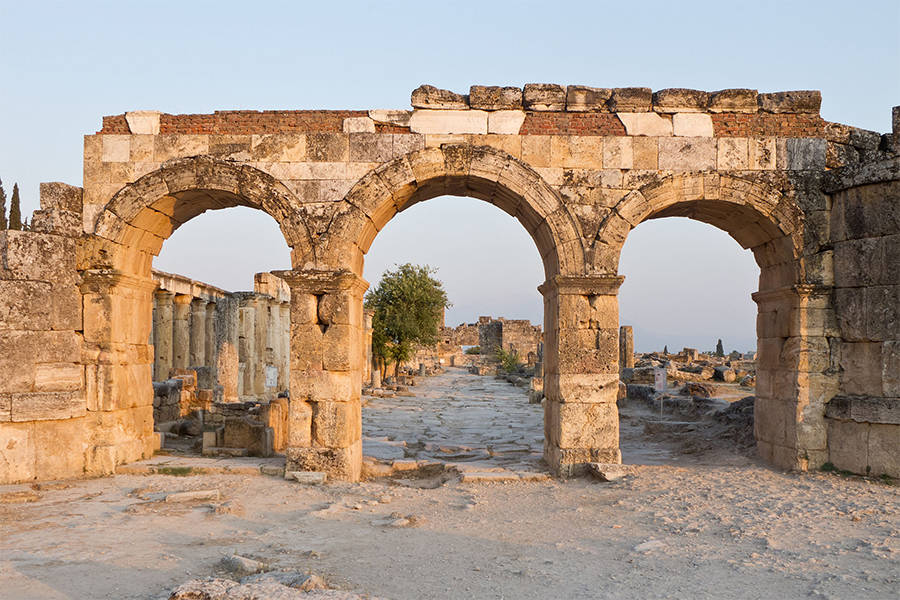 The Ploutonion underwent several transformations over the centuries. It was converted into a temple to Apollo in the years after Strabo’s visit, then bricked up by Christians in the sixth century AD before it was nearly destroyed by earthquakes.

It remained in that condition until February of 2018, when it was uncovered by the archeologists who put an end to the thousand-year-old mystery. 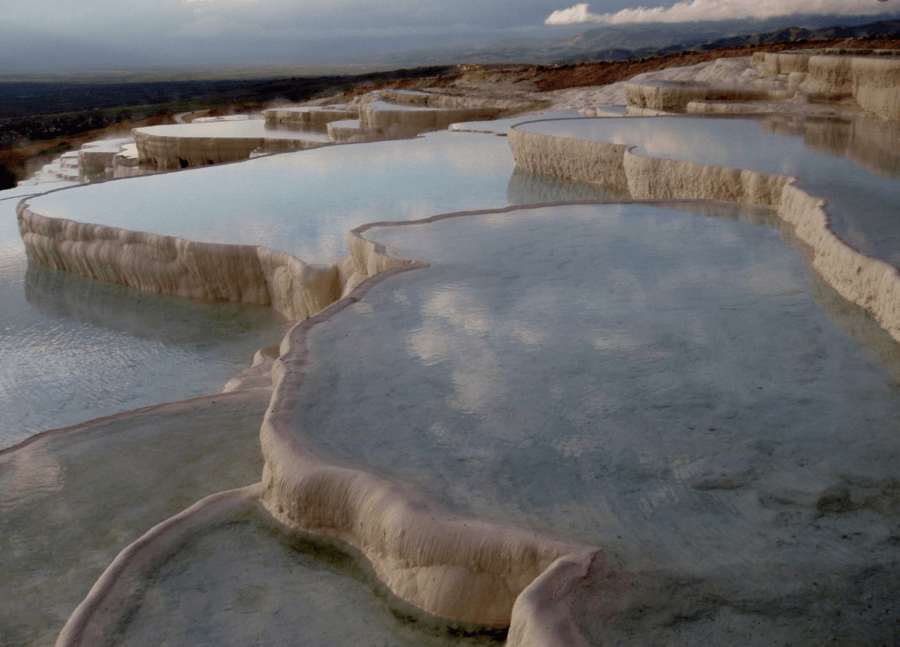 It’s not just the caves that have a fascinating history; the pools of Pamukkale, too, have seen their share of the great and mysterious.

For millennia, hopeful bathers have come to soak in the hot springs’ waters.

Though the area had been occupied and built on by the Phrygians as early as 600 BCE, it wasn’t until the second century BCE that it began to develop its reputation as a sacred place of healing, a holy city: Hierapolis.

Doctors prescribed their patients regular baths in the pools, and thousands of pilgrims, many with terminal illnesses, traveled there to seek the cure. The unsuccessful are still there, lying in Hierapolis’s necropolis, a massive graveyard just outside the old city’s walls. Archeologists have discovered more than 1,200 tombs. 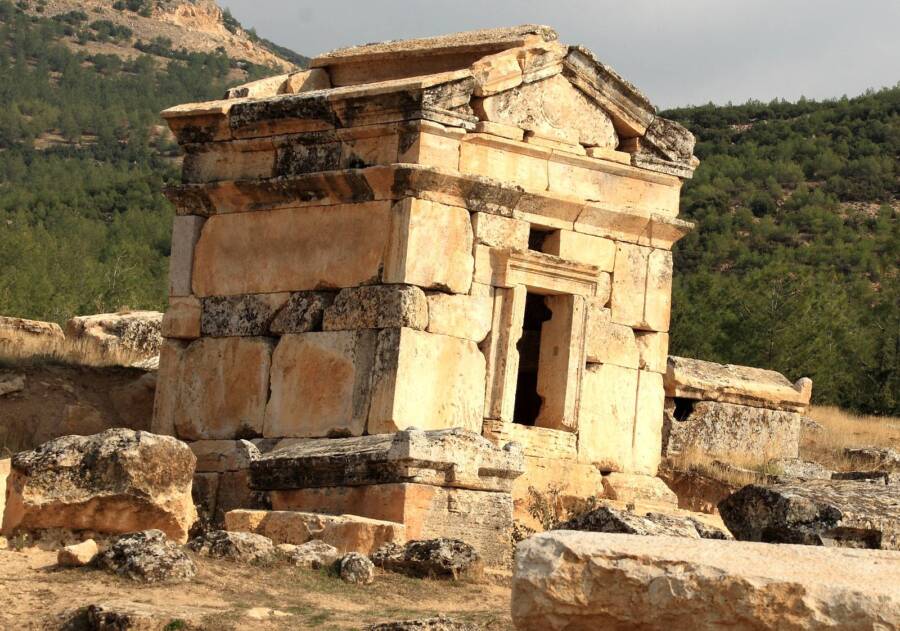 Wikimedia CommonsA tomb in the necropolis of Hierapolis.

Such was the fame of the pools that they even drew Roman emperors, including Hadrian in 129 CE. It was for his visit that the great amphitheater was built, a vast artistic tribute that seated an astonishing 15,000 amid beautiful friezes and columns themed around Dionysius, the god of wine and fertility. 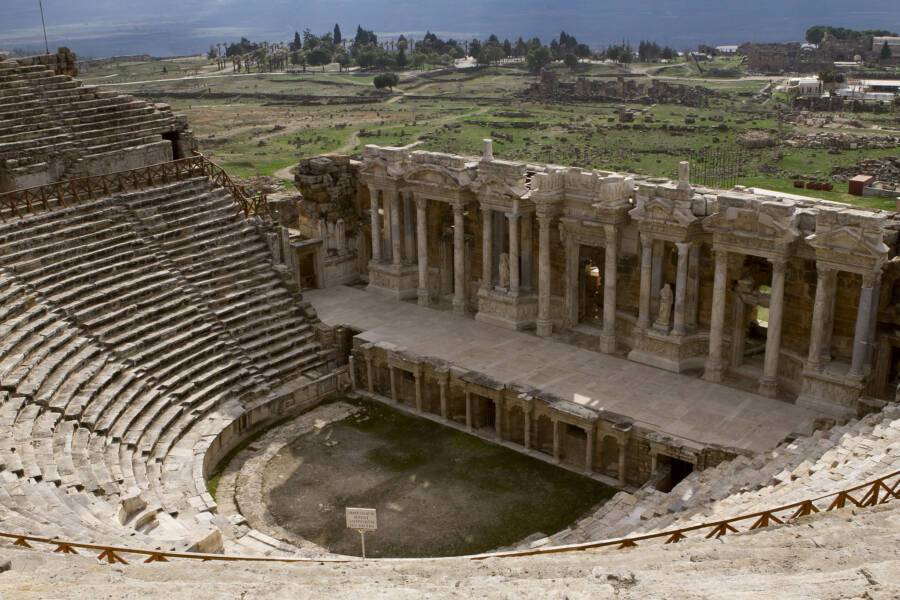 The Roman emperor Caracalla made his own pilgrimage the following century and was so impressed by what he found that he designated the city neokoros, a term meaning something akin to “temple warden.” It indicated a sacred and privileged place. To date, historians know of only 37 Roman cities given the much-sought-after designation.

Caracalla’s visit in particular ushered in a golden age for Hierapolis, as its population swelled to 100,000 and spread. New buildings were constructed: a gymnasium, temples, and baths (for those who were content to forgo Pamukkale’s pools). 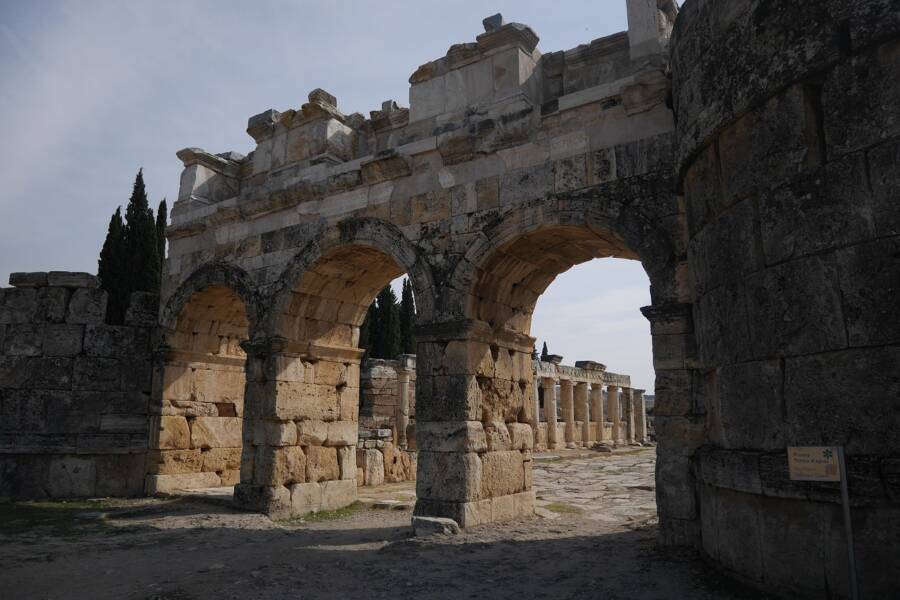 Time, however, eventually won out, and Hierapolis changed under its pressure: the early Christians arrived in the third and fourth centuries, shutting down or repurposing the great city’s temples and filling in its luxuriant baths.

Armies and earthquakes shook the area to its core during the medieval period, and as people fled, Pamukkale’s strange cotton-like travertine slowly encroached, covering what was left of the holy city. 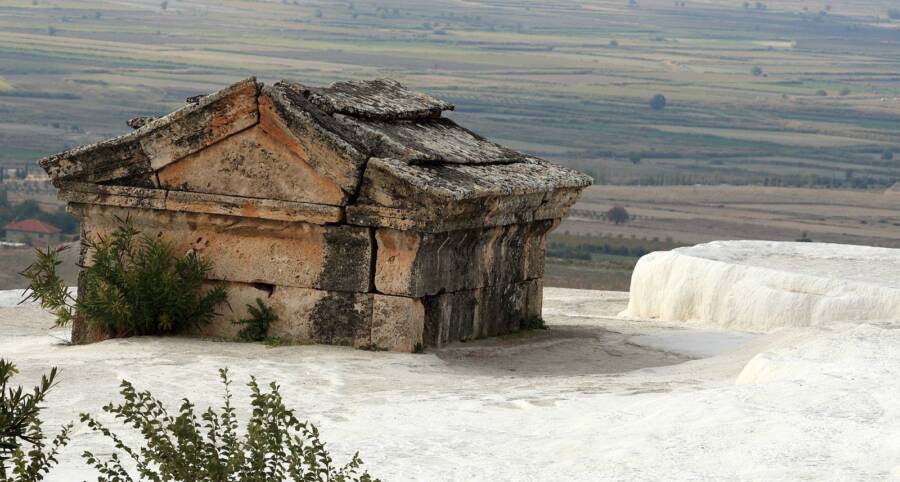 Wikimedia CommonsAn ancient tomb that has been slowly encased in travertine.

If you go to Pamukkale today, you’ll find the bones of that 2,000-year-old settlement are still there — you can walk the ruins and see the city’s old Byzantine gate, find the weather-worn friezes of the theater, and stroll the wide necropolis.

Where the baths once were is a museum that has collected the fascinating finds unearthed at the site, including elaborate statues and sarcophagi.

You will also find new things: a collection of hotels built to accommodate tourists, whose water usage nearly drained the pools in the 1960s. 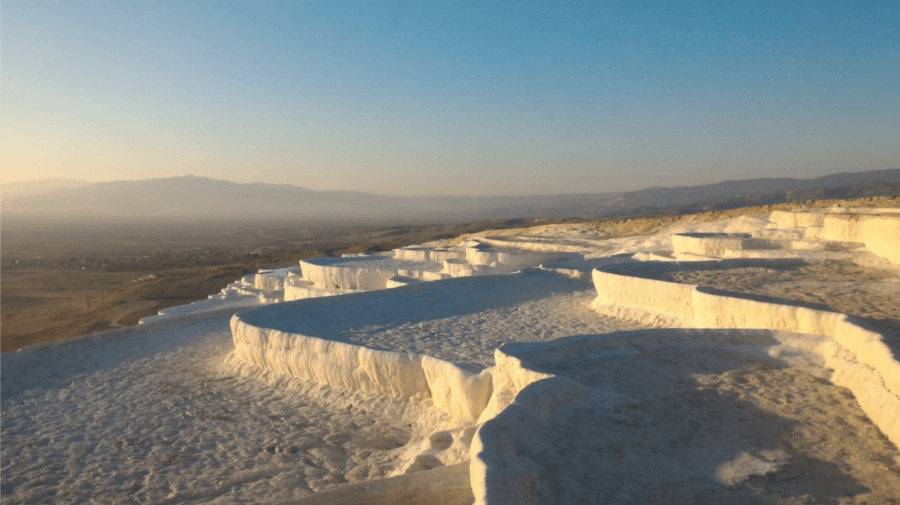 In the intervening decades, more thoughtful processes have been put in place. Though regulations now limit the amount of water that can be drawn from the pools and prohibit visitors from walking on the travertine terraces, wading is still allowed and encouraged. 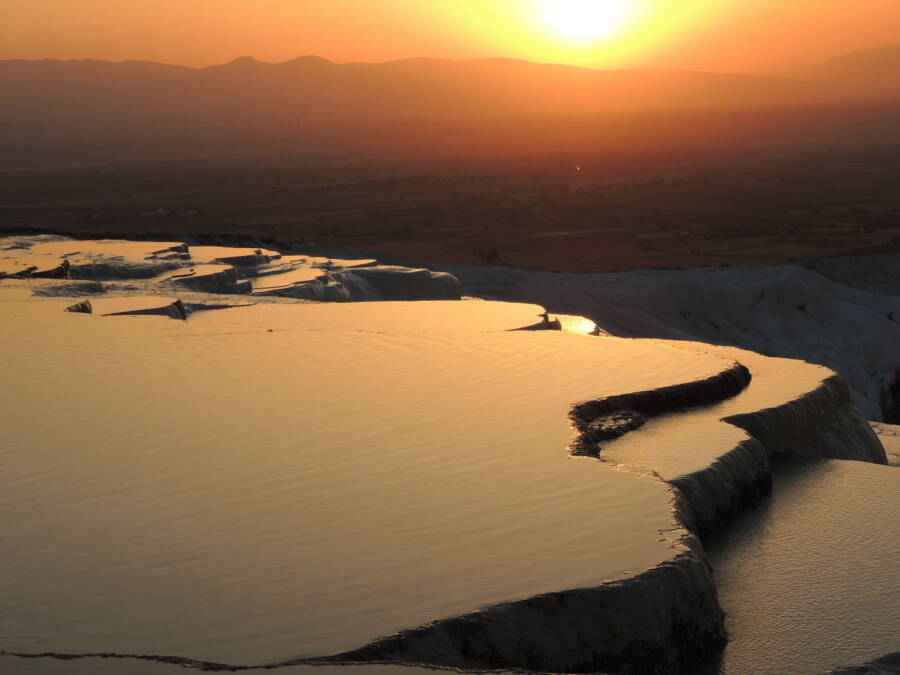 Flickr / Gina GleesonSunset on the cliffs at Turkey’s Pamukkale.

So visitors to Pamukkale are literally steeped in history: they bathe in the ancient waters where Roman emperors soaked. They join the hundreds of thousands who turned to the pools in their time of need, who splashed and told stories of giants and magic and gods.

And maybe, by joining such a long tradition, they become a part of history too.

After learning about Turkey’s Pamukkale, check out Urueña, the Spanish town with more books than people. Then, read up on the lost underground city of Derinkuyu.