In November 1989, Kim Broderick's mother Betty Broderick shot and killed her ex-husband Dan and his new wife Linda Kolkena in a jealous rage — then Kim delivered damning testimony against her. 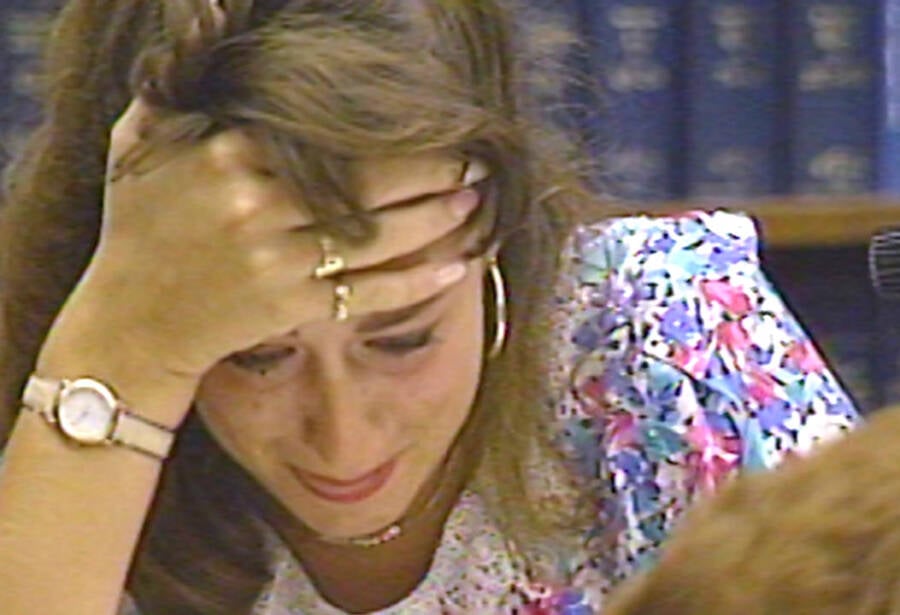 CourtTVSome of Betty Broderick’s children testified against her in court, including Kim Broderick, seen here crying on the stand.

Raised by two well-known and well-off parents in San Diego, Kim Broderick seemed to want for nothing. She attended private schools and enjoyed luxurious vacations with her family, but then, her parents Dan and Betty Broderick divorced in a separation that became a nightmare.

During the bitter, years-long separation, during which Dan Broderick proposed to his young new girlfriend Linda Kolkena, Betty became violent. Dan eventually filed a restraining order against Betty, who had reportedly been harassing the new couple — and even drove her car into their house.

Then on Nov. 5, 1989, the drama finally culminated in Betty Broderick killing her ex and Kolkena while they lay in their bed.

Kim Broderick, meanwhile, was a teenager in all this, and just 21 when she testified in her mother’s murder trial. She recalled how her mother called her a “traitor” and that she wished she was never born.

She claimed that her mother had even called her right after killing her father to tell her what she’d done. 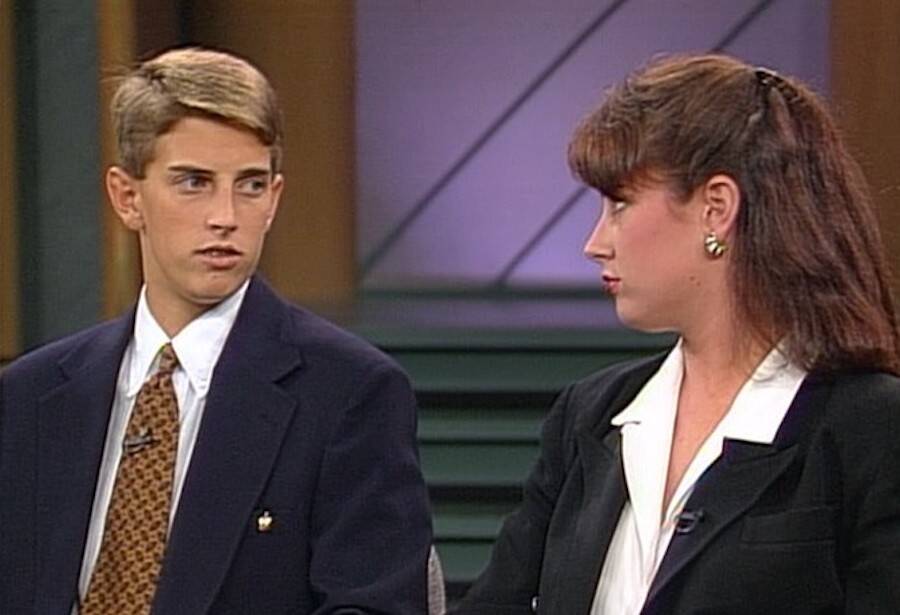 OWN/YouTubeDaniel and Kim Broderick on The Oprah Winfrey Show in 1992.

Kim Broderick was born on Jan. 7, 1970, in San Diego, California. Her parents had gotten married one year earlier after meeting at a Notre Dame football game in Pittsburgh. Betty Broderick was deeply Catholic and initially the main provider in the family as she taught and babysat while Dan completed his studies at Harvard Law School.

Kim Broderick is the eldest of five children. Her younger sister, Lee, was born in 1971, while her brothers Daniel and Rhett were delivered in 1976 and 1979, respectively. One of the Broderick children forever remained without a name, however, as the boy died within days of his birth.

Money was not a problem to the Brodericks. Dan was earning more than $1 million annually at a reputable law firm. The happy family lived in a sizable home in La Jolla, owned a ski condo, a boat, were members of various country clubs, and had a fire-red Corvette in the garage. It seemed Kim Broderick’s mother was happy — until 1983.

When Dan promoted his 22-year-old receptionist Linda Kolkena to be his assistant that year, Betty became suspicious. A former flight attendant, Kolkena had no degree and couldn’t type. Betty paid a surprise visit to Dan’s office and allegedly found him out on a long lunch with Kolkena, and two empty champagne glasses were sitting on his desk.

Dan denied that the two were having an affair, but Betty didn’t believe him and threw everything from stereos to bowls to ketchup bottles in a fit of rage. Kim Broderick also recalled Betty “would scratch him and things” — and once even burned his clothes in the front yard while the Broderick children watched.

Kim Broderick recalled that when her father came home that night he “picked up the few pieces that weren’t burned or ruined and then they went to bed, like everything was normal.”

While the couple was still married, Dan moved out to live with Kolkena. Then, the drama escalated to violent levels.

The Murder Of Dan Broderick And Linda Kolkena 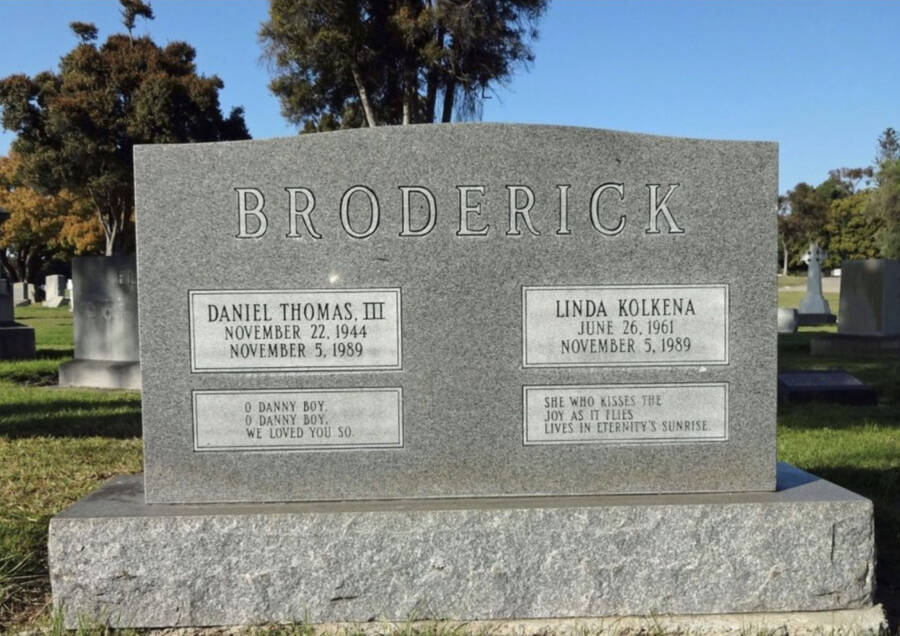 In 1985, Dan Broderick filed a restraining order against Betty when she broke into his new home and spray-painted the bedroom. A year later, Kim Broderick’s father filed for divorce and to gain custody of all four children. She was 15 at the time.

As the bitter proceedings continued, Betty reportedly told her children that she would kill their father.

Then, Betty began unexpectedly leaving the kids at her husband’s house out of spite. Kim Broderick recalled how her younger siblings were “hysterical — holding onto her, crying and screaming. Crying hard, ‘Don’t leave us here.'” According to Kim Broderick, her erratic mother replied, “Your dad’s not going to get away with this.'”

In February 1986, Betty crashed into the front door of her husband’s house, violating her restraining order. She claimed this was in response to the court-ordered sale of her home, which Dan pulled off without telling her. Kim Broderick recalled the crash “sounded like a chain saw” — leading her to run out of the backdoor.

She recalled that her mother “stuck her tongue out” when she returned 20 minutes later. Police discovered a knife in the car and placed Betty Broderick in psychiatric care for three days. When the divorce was finalized in 1989 and Dan Broderick gained custody of his children, Betty went after Kim.

“Mom and I didn’t get along,” recalled Kim Broderick. “I don’t think she thought very much of me … She said, ‘Oh, well I was driving down the street right by SeaWorld and all of a sudden I just remembered that I hate your guts. You just make me sick … You’re just a traitor, you make me sick, you make me wanna throw up. I wish you were never born.'”

While Betty Broderick continued to torment her ex-husband by leaving obscene messages on his answering machine, Dan’s marriage to Kolkena on April 22 pushed her over the edge. On November 5, Betty used a key her daughter Lee had given her and snuck into Dan’s home — and shot him and Kolkena in their bed at 5:30 A.M.

Where Are Betty Broderick’s Children Today?

Betty Broderick’s children were the first people she called to confess to the murders. Kim testified at her mother’s trial in the fall of 1990 that her mother didn’t cry while admitting to her crimes. She also recalled that Betty said she planned on killing herself on the night in question — but had run out of bullets.

Charged with two counts of second-degree murder, Betty Broderick was convicted in 1991 and sentenced to 32 years to life in prison. As detailed in her 2014 memoir Betty Broderick, My Mom: The Kim Broderick Story, Kim has continuously denied her mother’s requests to write any letters supportive of an early release.

Kim Broderick also revealed that her mother continued to torment her even behind bars, saying that her mother would tell her “‘If it weren’t for you, I wouldn’t be here.’ But I think she’s handling it better now.”

Kim Broderick nonetheless described seeing her mother in prison as “the worst heartache and sorrow I could ever imagine” aside from her father’s death. Kim Broderick has since moved to Idaho with Lee and Rhett and started a family of her own.

After learning about Betty Broderick’s kid Kim Broderick, read about the “Wife Swap Murders” of Jacob Stockdale. Then, learn about Gypsy Rose Blanchard and how she used violence to escape her abusive mother.