Parasitic Worm Crawls Up Man’s Penis, Lays Eggs, And Then Nearly Kills Him

"It wasn't exactly how I imagined the trip of a lifetime to go. The whole experience was surreal and strange." 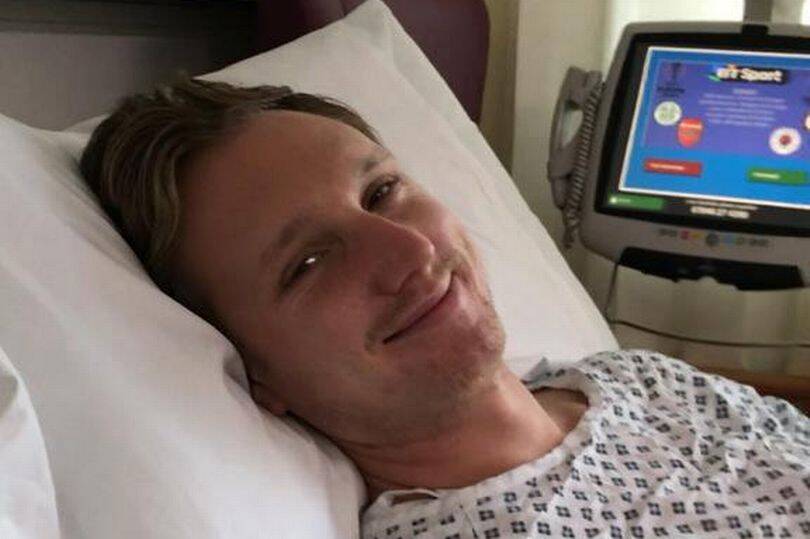 When 32-year-old James Michael visited Southeast Africa with his friends, he thought it was the “trip of a lifetime.” But the Londoner ended up contracting schistosomiasis — a parasitic blood infestation — when a parasite crawled up his penis and laid eggs inside of his body.

According to Fox News, the trip began in Zambia in August 2017. The group continued through Zimbabwe and then went on to Malawi for five days. Michael and his friends were going for a swim in Lake Malawi when the pesky parasite infiltrated his system.

“When I look back at photos from my time in Africa, it’s weird to think that’s where the parasite crawled up my penis,” he said. 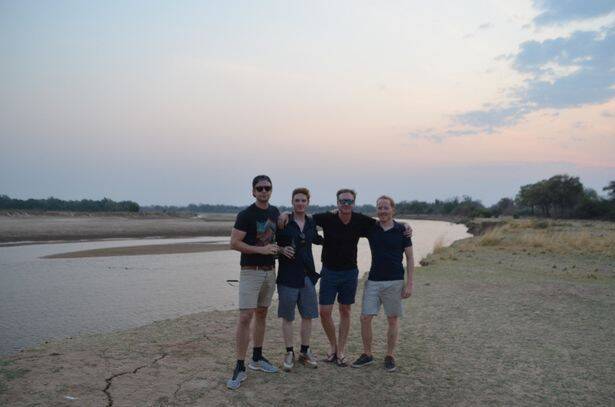 James Michael/SWNSLittle did Michael know that there was already a worm inside his body by the time he dried off.

The symptoms didn’t make themselves apparent until after he returned to England. Even then, it took more than a year — until October 2018 — for Michael to realize that something was wrong. He initially dismissed a loss of feeling in his legs as fatigue from exercise.

But when climbing the stairs in his own apartment became a challenge, he immediately went to the hospital. Sent home with a simple prescription of antibiotics, he felt even worse throughout the following week. So he returned to his doctors.

“I explained to them that something serious was going on,” he said. “I went to the neurology department and they did blood tests to see what was up. They determined quite quickly that my immune system was attacking my spine, leading to the loss of control of my legs.”

The presumably unnerved patient was subsequently “put on a six-month course of steroids to counter this…but they didn’t actually know what had caused this.” 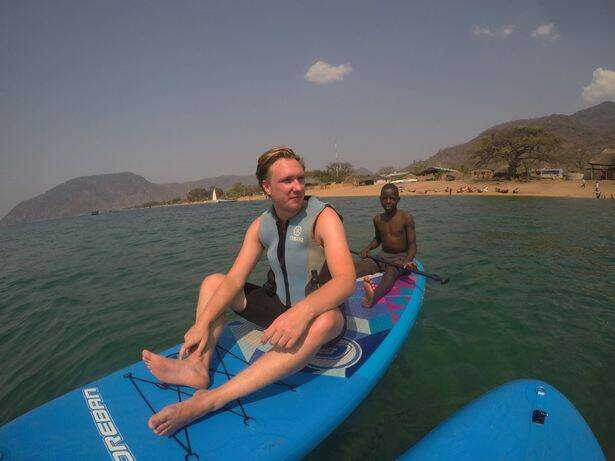 Only when experts from the Hospital for Tropical Diseases took a closer look at Michael were they able to pin down the exact problem. It was then, one week before Christmas, that Michael found out about the parasitic worm and the eggs it laid inside of him.

“It wasn’t exactly how I imagined the trip of a lifetime to go,” he said. “The whole experience was surreal and strange.”

Only parasitic worms have been found to cause schistosomiasis. These little critters live in freshwater lakes in tropical regions, and they are commonly found in Africa. Once the worm enters a host, it navigates through the blood, and finds adequate nesting areas like the liver or the bowel.

After a few weeks, it begins to lay eggs.

While some of these eggs are naturally defeated by the host’s immune system, enough of them remain to pose serious danger if left untreated. Fortunately, Michael was given praziquantel to kill any and all worms that were still lingering in his body.

“That killed the infection, but I was left basically debilitated,” said Michael. “They told me there was a 30 percent chance I’d make a full recovery — 10 years from now.” 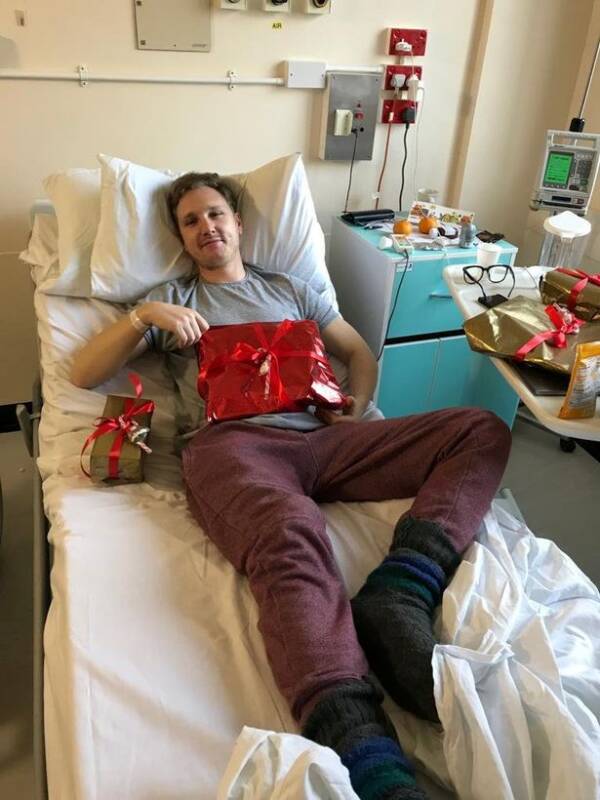 James Michael/SWNSFortunately, James Michael is feeling better after a course of steroids.

The low odds of making a full recovery were not even the worst part of Michael’s misfortune. The man spent three months in the hospital and then relied on crutches for four months after his release. This entire saga only ended in April of this year.

“It was a horrible feeling — I felt completely helpless, and the odds weren’t good,” he said. “I couldn’t wish what I’ve been through on anybody.”

There was also the issue of debilitating side effects caused by the steroids he had to take to combat the disease. The extreme breakout of acne on his back wasn’t merely an aesthetic nuisance — it was painful. He also had terrible diarrhea, couldn’t use the toilet normally, and needed a catheter. 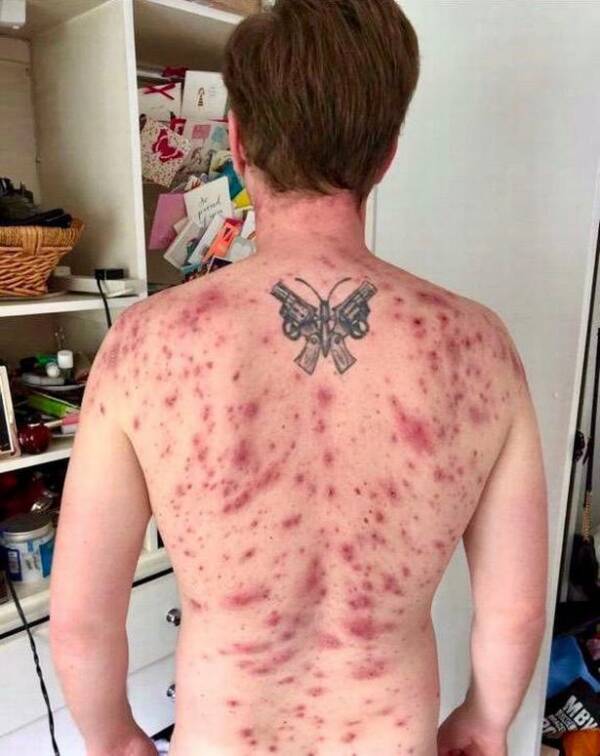 James Michael/SWNSThe breakout was so painful that he couldn’t sleep on his back, hug his girlfriend, or properly shower.

“The pain has been like nothing I’ve ever known,” he told The Sun. “I couldn’t sleep for a month because lying on my back hurt. I couldn’t really be under running water either, so I had to shower my front instead. The loss of feeling and use of my legs affected every part of my life. I wasn’t able to exercise.”

Michael was even unable to hug his girlfriend due to the pain, and had a severe loss of appetite.

“This has been horrendous,” he said. “It’s felt like a never-ending mountain I’ve had to climb.”

After learning about the man who nearly died when a parasitic worm crawled up his penis, read about the woman who found parasitic worms in her eye – and pulled out some of them herself. Then, find out the six grossest parasites that can infect the human body.