The altar was found in the ancient Graeco-Roman city of Patara and is shedding invaluable light on the ancient Greek religious practices of its time. 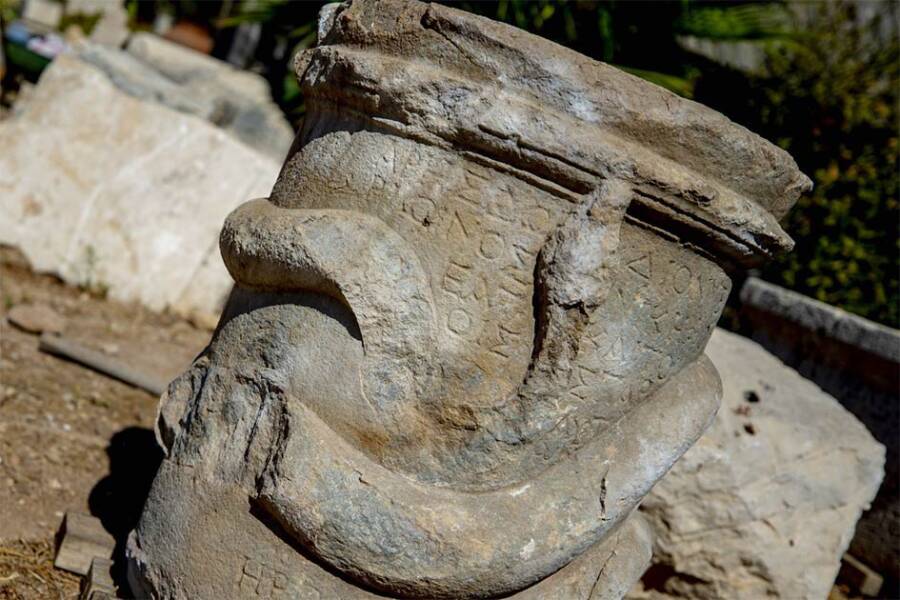 Mustafa Koçak/Antalya Bilim UniversityThe ancient city of Patara in Turkey is also known as “the cradle of civilizations.”

Archaeologists in the ancient Greek city of Patara have uncovered a stunning 2,000-year-old altar engraved with a coiled, decorative snake relief. While serpents have proven a ubiquitous symbol across ancient civilizations, this is first discovery of its kind in Patara, which has an intriguing history of its own.

According to Archaeology News Network, the ancient city in Turkey’s southern Antalya Province is known as the “cradle of civilizations” because it was once a diverse melting pot where cultures converged millennia ago. The city served as the capital of the Lycian League, an alliance of Greek city-states, before joining the Roman Empire.

The city was named after Patarus, its mythological founder and the son of the Greek god Apollo. According to Greek Reporter, Patara was governed by several emperors throughout its long and winding history, with notable incidents including its conquering by Alexander the Great in 333 B.C. 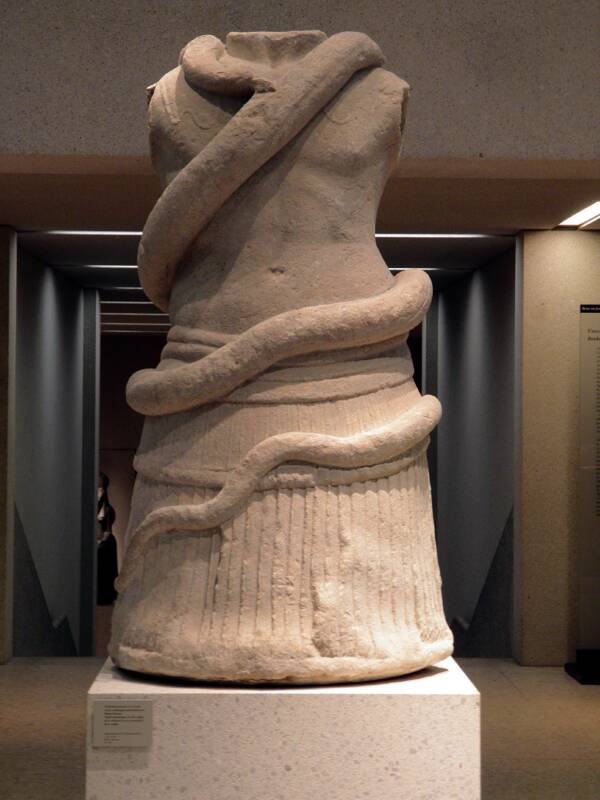 Wikimedia CommonsThe monument is the first discovery of its kind in the area.

The snake altar has been officially dated back to when the city was under Roman rule, and researchers are confident that it is tied to the religious worship of underground gods associated with agriculture. It’s currently posited that offerings like food were made at the altar and that it was perhaps also used for funerary rites, as the underground gods were also believed to rule over the dead.

Carved out of marble, the cylindrical artifact is in pristine condition. The snake was carved to coil upwards around the altar, with Greek letters engraved beside its serpentine body. Mustafa Koçak, an academic at the Department of Archaeology at Antalya Bilim University and vice president of the excavation team, explained that the ancient residents were familiar with snakes, but that the local species are “very harmless.”

Koçak added that Patara was polytheistic during the time in which this altar was made, and it allowed for a wide range of religious worship. This particular altar is therefore believed to have served as an agricultural totem.

The archaeologist also proffered his theory that foodstuffs were left at the shrine, and “made on this altar to calm the underground gods.” These appeasements likely consisted of various breads and meats, with a punishing belief that unsatisfied gods could cause environmental disasters.

“They brought liquid or food such as bread and meat and put them on the altar,” Koçak said. “This is actually an item from the funerary culture of ancient people. Similar altars were also found in some ancient cities in southwestern Muğla province, but we have never encountered such an example in Patara.” 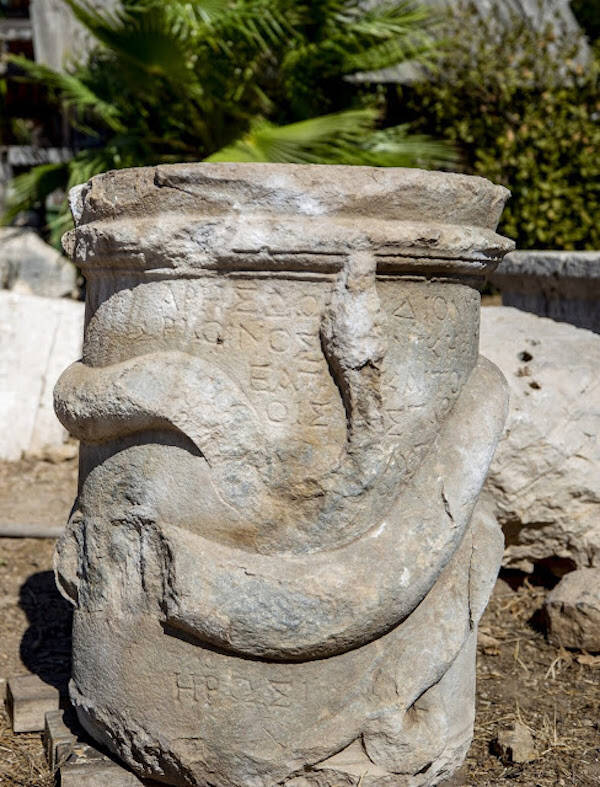 Mustafa Koçak/Antalya Bilim UniversityThe Greek inscriptions on the artifact have yet to be publicly translated.

Koçak added that the altar likely demonstrates the relationship between the people of Patara and the outside world.

The Turkish archaeology team uncovered the Greek snake altar during excavations near the Roman walls and baths of Patara. Inhabited by the Luwian-speaking Anatolians in the Bronze Age, Patara also served as the main port and trading center of Lycia, a historical region, and is believed to be the birthplace of Saint Nicholas, himself.

According to Ancient Origins, the find has been shedding invaluable light on the rituals and religions of the Graeco-Roman world. That era, which spans from 332 B.C. to 395 A.D., saw both ancient Greek and Roman influences on the cultures, governments, and religions surrounding the Mediterranean and Black Seas. 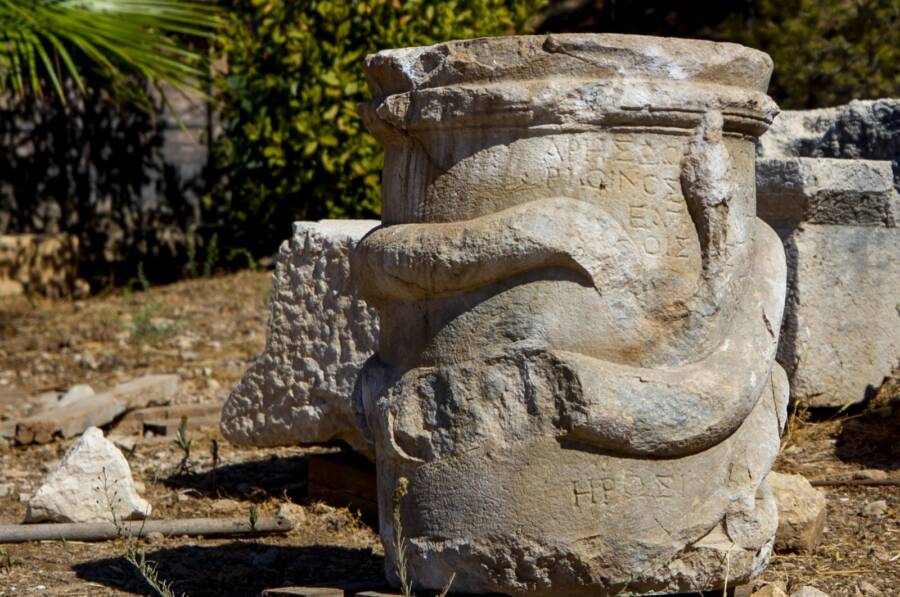 Mustafa Koçak/Antalya Bilim UniversityThe altar has now been removed and secured while excavations in Patara continue.

It is not yet publicly known what the inscription on the altar means. This incredible find follows a 2018 discovery of ruins and mosaics in Muğla, which belonged to Phainos, the most famous fisherman in history.

As for the Greek snake altar, the Turkish research team has since removed and secured the artifact to prevent any irrevocable damage. It’s quite likely that it will be put on display at some point in the near future, as excavations in Patara continue.

After learning about the 2,000-year-old Greek snake altar excavated in Turkey, read 33 facts about Ancient Greece that you won’t find in your history books. Then, learn about this ancient Mayan palace that was uncovered in Mexico’s Yucatán jungle.