The Story Of Patrick Kearney, The Genius Serial Killer Who Had Sex With His Victims After Murdering Them

Patrick Kearney's IQ was ridiculously high, but even he couldn't outsmart the law. 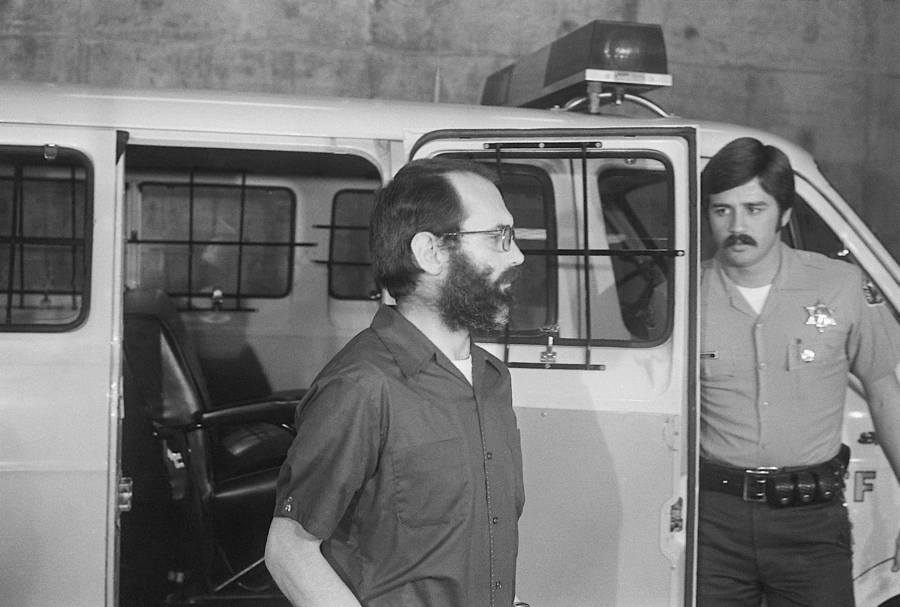 Tony Korody/Getty ImagesPatrick Kearney arrives at the Criminal Courts Building under the watchful eye of a sheriff’s deputy.

From a young age, it was clear that there was something strange about Patrick Kearney. At thirteen, his father taught him to slaughter pigs by shooting them behind the ear with a pistol. Kearney instantly took a liking to the task and began killing pigs that weren’t meant to be slaughtered on his own.

It was the blood and the organs he liked so much. And when he thought no one was around, he would kill the pigs so that he could roll around in their intestines.

Small and strange, Kearney was a target for bullying at school. The bullying left a lasting impact on Kearney’s personality, and he began fantasizing about killing the people who wronged him.

After school, Patrick Kearney joined the Air Force. During his time in the military, Kearney met David Hill. Though Hill was married, he and Kearney began a love affair. After Kearney’s discharge from the military, the two moved to California.

There, Kearney and Hill began to argue frequently. Eventually, Hill left and went back to his wife.

Kearney, meanwhile, began cruising gay bars in southern California and Mexico. But what Kearney really wanted was something far darker than casual sex.

In 1962, Patrick Kearney picked up a 19-year-old hitchhiker on his motorcycle. After driving the young man to a secluded spot, Kearney shot him behind the ear, the same way he had killed pigs. After the victim was dead, Kearney sexually assaulted his body.

Kearney’s next victim was the young man’s cousin, who had seen Kearney pick his victim up on his motorcycle. Kearney realized that he could silence a potential witness and indulge his need to kill at the same time. The method was the same: Kearney lured his victim to a remote area, shot him in the head, and assaulted his corpse.

There was just one more victim that year, another teenage boy that Kearney picked up off the street.

The next year, Hill left his wife again and returned to Kearney. The pair settled into a home in Culver City, California. The next murder wouldn’t come until 1967 when Hill and Kearney visited one of Hill’s friends in Tijuana. 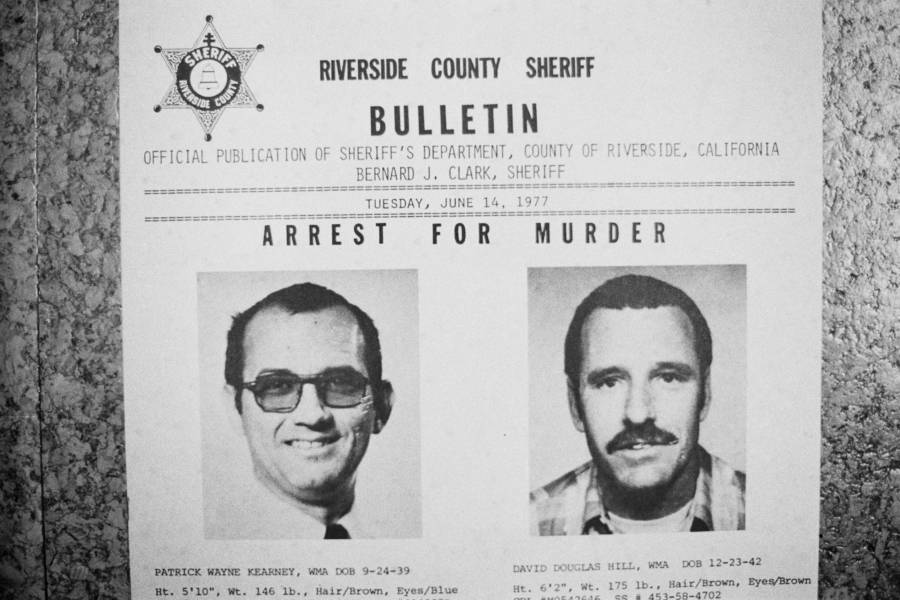 Kearney couldn’t resist the opportunity. He snuck into the man’s room and shot him between the eyes with a pistol. He then dragged the body to a bathtub, where he assaulted it and began dismembering it with a knife.

He then pulled the bullet out of the man’s skull with the knife and buried the body behind the garage before returning to California.

There seems to have been something about Kearney’s relationship with Hill that let him resist his urge to kill. So when Hill left once again in 1971, Kearney began looking for victims.

By now, Patrick Kearney had refined his procedure. He began picking up hitchhikers, prostitutes, men from bars, and children as young as eight. Often, he would target people who bore some resemblance to the people who had bullied him in school.

Once he had them in his car, he would drive with his left hand, making sure to keep to the speed limit to avoid being pulled over. Once he was sure no one could see the car, Kearney would shoot the victim in the head with his right hand.

Leaving the body sitting upright in the seat to look like a passenger, Kearney drove to a secluded spot. There he assaulted the bodies before cutting them up into pieces with a hacksaw. The dismembered parts were then placed in trash bags and dumped in different places around the area, usually freeways.

But while Kearney was careful about disposing of the bodies, he wasn’t careful enough.

Police were able to draw links between the body parts that began showing up on the side of the freeways and identify the victims. The identity of one of those victims, John LaMay, led police back to Kearney in 1977. Police visiting Kearney’s house were then able to gather hair samples that they linked to the trash bags that LaMay’s body was dumped in.

An arrest warrant was put out for Kearney and after a brief period on the run, he turned himself in.

After his arrest, Kearney eventually confessed to 35 murders. If true, then it means that Kearney was one of the most prolific serial killers in American history.

A psychiatrist who interviewed Kearney after his arrest determined that he had an IQ of 180, well above what’s considered a “genius.” To put it in perspective, Dr. Manahel Tahbet, an economist widely recognized as one of the smartest people alive, only has an IQ of 168.

This could explain why Kearney was able to get away with so many murders before he was arrested. He knew how to cover his tracks and avoid the police.

Due to his cooperation in confessing, Kearney was spared the death penalty. Instead, he was given life in prison, where he remains today.

After learning about Patrick Kearney, read about Marilyn vos Savant, the woman with the world’s highest IQ (and no murder accusations to speak of). Then, check out these serial killer quotes that will chill you to the bone.