The End Of The Symbionese Liberation Army 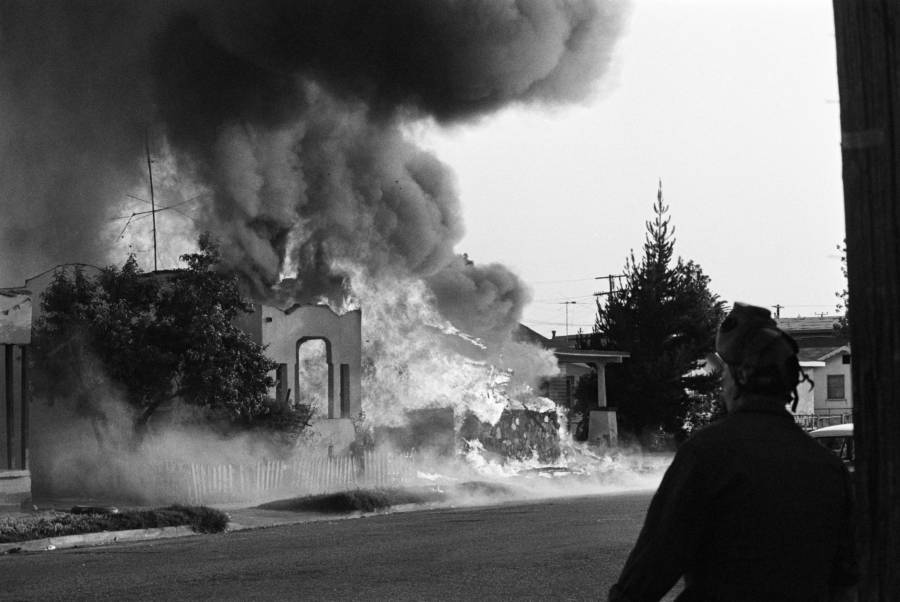 Tony Korody/Sygma/Sygma via Getty ImagesThe Symbionese Liberation Army house burns in the course of the confrontation with police on May 17, 1974.

The end of the Symbionese Liberation Army began a month after the bank robbery, when Patty Hearst, now known as “Tania,” accompanied a couple other members to Mel’s Sporting Goods Store in Los Angeles. As S.L.A. members William Harris and his wife Emily were about to pay for their supplies and leave, Harris tried shoplifting an ammunition case. When the pair were confronted by store security, they forced their way to the front of the store, where Hearst pulled a gun and shot up the store’s sign.

That got the L.A.P.D.’s attention, and they put out an APB for the van that the S.L.A. members fled in. That van was later spotted in front of a small house on 54th St., which was immediately surrounded by hundreds of police officers.

Over the next several hours, more than 9,000 rounds of ammunition crossed each other in the air as the S.L.A. and L.A.P.D. traded gunfire, while residents fled the now-blocked-off neighborhood and half the country tuned in to the local news, which broadcast the event live.

As the siege went on, one member of the S.L.A. was fatally wounded by a shot through the wall and two more were killed as they tried to flee out the back. When police fired scores of gunpowder-actuated tear gas canisters through the window, starting a massive fire that quickly engulfed the whole place, General Marshall Cinque Mtume of the People’s Symbionese Liberation Army led his two surviving followers into a crawlspace under the house. Their corpses were later found with their gas masks melted to their faces.

Through it all, the only question anybody cared about, and the one that the media kept bringing up, was whether or not Patty Hearst was in the house. As it happens, she wasn’t.

She had separated from the rest of her group and gone to a different safe house and watched the siege on TV like everybody else. After it was over, and all six S.L.A. members’ deaths were confirmed, Comrade Tania released her last public statement as an urban revolutionary:

Greetings to the people. This is Tania. I want to talk about the way I knew our six murdered comrades because the fascist pig media have of course been painting a typically distorted picture of these beautiful sisters and brothers. Cinque was in a race with time believing that every minute must be another step forward in the fight to save the children. Gelina was beautiful. She taught me how to fight the enemy within through her constant struggle with bourgeois conditioning. Gabi crouched low with her ass to the ground. She practiced until her shotgun was an extension of her right and left arms. Zoya, female guerrilla. Perfect love and perfect hate reflected in stone cold eyes.

Fahizah taught me to shoot first and make sure the pig is dead before splitting. She was wise and bad. Cujo was the gentlest, most beautiful man I’ve ever known. He taught me the truth as he learned it from the beautiful brothers in California’s concentration camps [That would be the California Department of Corrections, where convicted felons go after getting a jury trial – ed.]. Neither Cujo or I had ever loved an individual the way we loved each other. Our relationships foundation was our commitment to the struggle and our love for the People. I died in that fire on 54th Street, but out of the ashes I was reborn. I know what I have to do.

What Patty Hearst had to do, apparently, was rob another bank, in Sacramento, where more careless gunplay (by a different S.L.A. member, not Hearst) got a 42-year-old woman making a deposit for her church shot in the chest with a 12-gauge shotgun.

Authorities followed a trail that eventually led them to Hearst’s apartment in the Mission District in San Francisco, where she was arrested in September 1975, 17 months after the kidnapping.