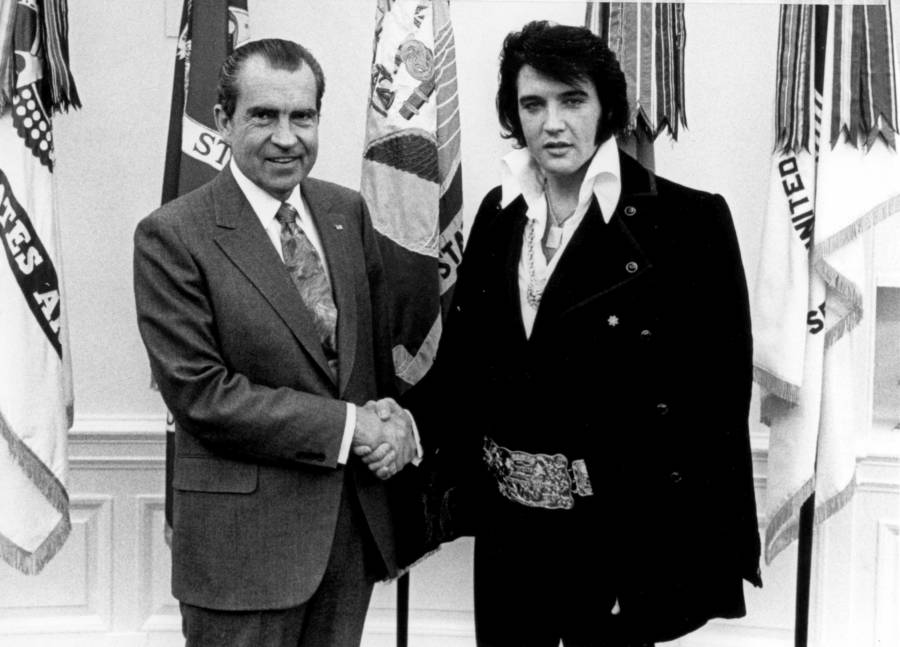 President Richard Nixon meets with Elvis Presley at the White House on December 21, 1970.

Presley was there, many sources say, in hopes of getting a badge from the federal Bureau of Narcotics and Dangerous Drugs, so that he, as he believed, could carry firearms and drugs as he pleased, wherever he pleased.National Archives/Handout/Getty Images

This photograph of the devastating impact of a napalm attack on June 8, 1972 remains the most iconic image of the Vietnam War. The girl in the center of the photograph is nine-year-old Kim Phúc, who is running away from the attack with severe burns. UPI/Bettmann/Getty Images

On May 4, 1970, National Guardsmen opened fire on student protestors during an anti-war demonstration at Ohio's Kent State University, killing four and wounding nine.

This iconic image depicts 14-year-old Mary Ann Vecchio kneeling over the body of Jeffrey Miller just after he was fatally shot.Cliff/Flickr 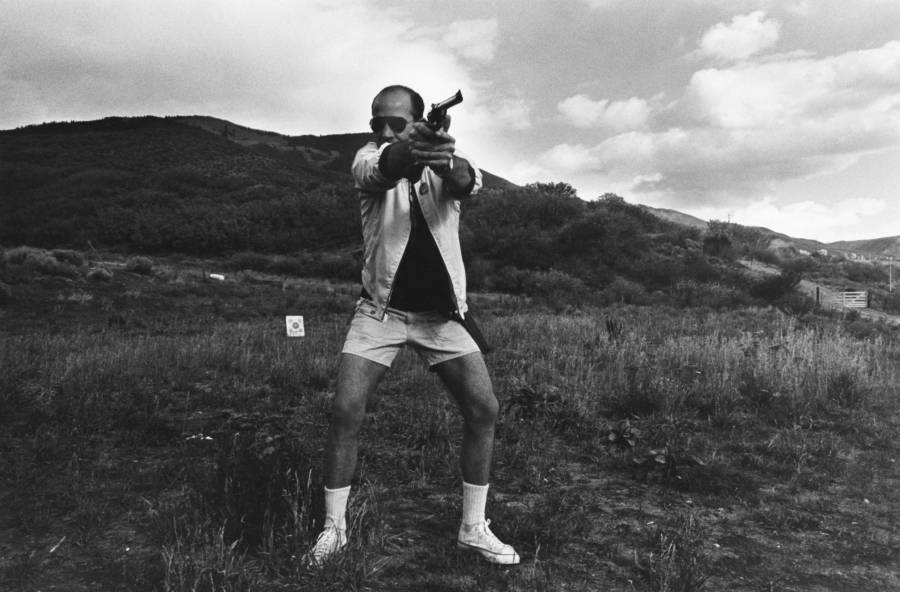 After the Watergate scandal rocked his presidency, Richard Nixon resigned on August 8, 1974. This photo, taken the next day, shows him waving goodbye as he boards a helicopter to leave the White House.Bill Pierce/The LIFE Images Collection/Getty Images

On November 18, 1978, Peoples Temple cult leader Jim Jones told his followers to commit “revolutionary suicide” by drinking cyanide fruit punch. They did as they were told, and 909 members, more than 200 of which were children, were soon found dead at the Jonestown compound in Guyana. Jones himself was found dead with a bullet wound to the head.David Hume Kennerly/Getty Images 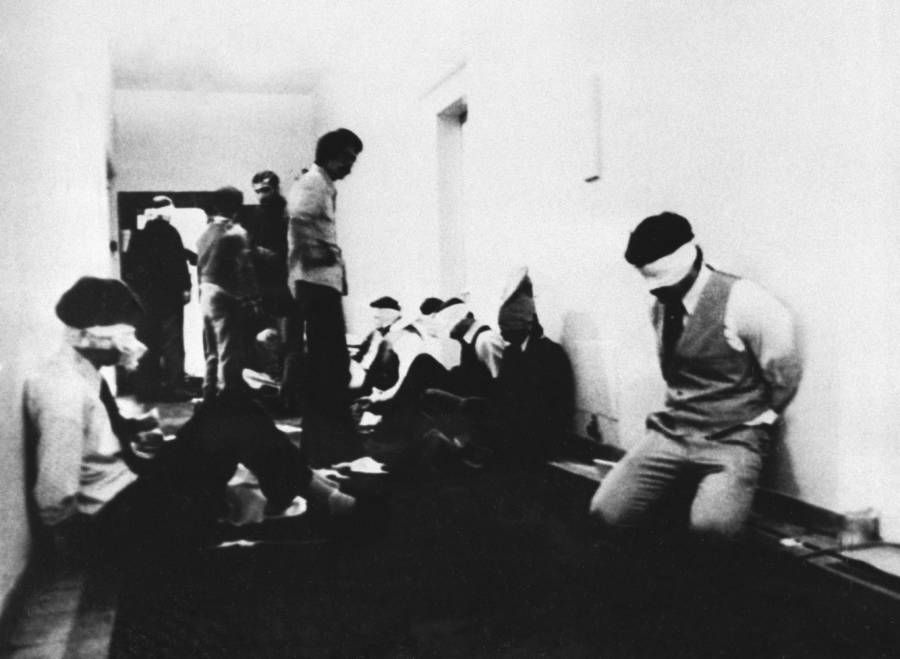 Photograph taken by one of the Iranian student kidnappers inside the US embassy in Tehran at the very beginning of the hostage crisis, in which 52 Americans were held hostage for 444 days, starting on November 4, 1979, by a group of Islamist students and militants in support of the Iranian Revolution.GAMMA/Gamma-Keystone via Getty Images

On September 5, 1972, during the 1972 Summer Olympics in Munich, Germany, 11 members of the Israeli Olympic team were taken hostage and eventually killed by the Palestinian terrorist group Black September. This haunting image captures one of the kidnappers standing in the hotel balcony during the siege. AFP/Getty Images 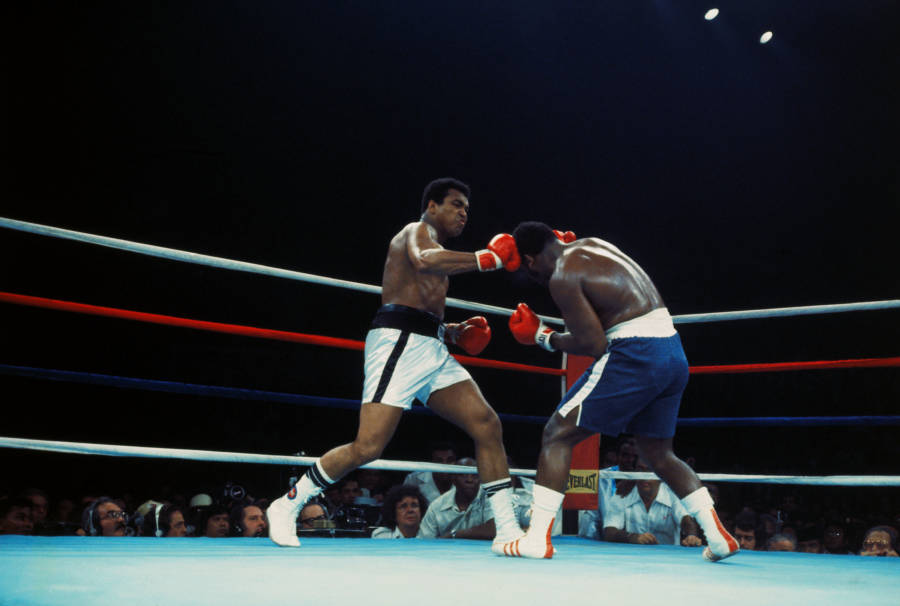 Muhammad Ali lands a right on Joe Frazier during the second round of their "Thrilla in Manila" fight, which Ali won, in the Philippines on October 1, 1975.Bettmann/Getty Images 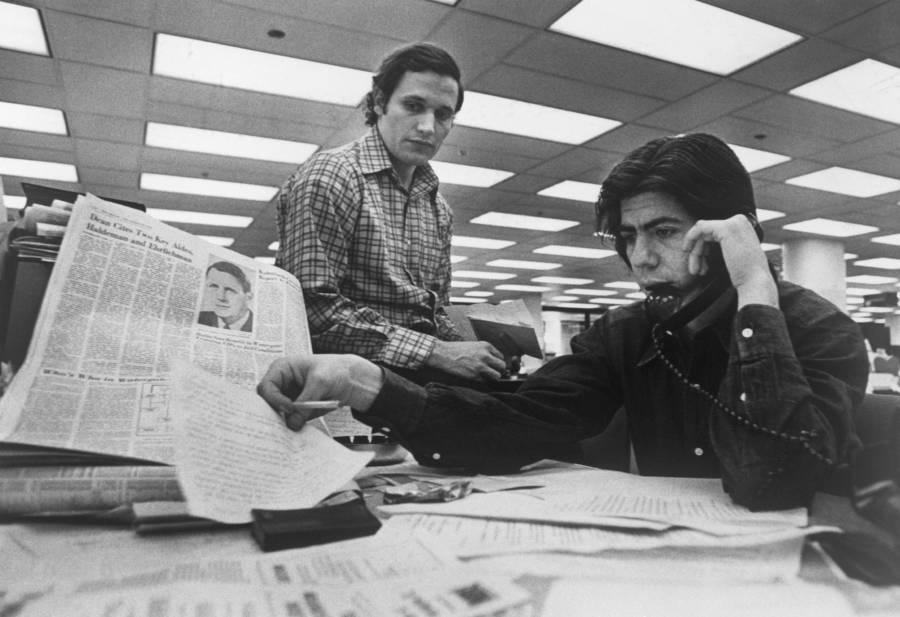 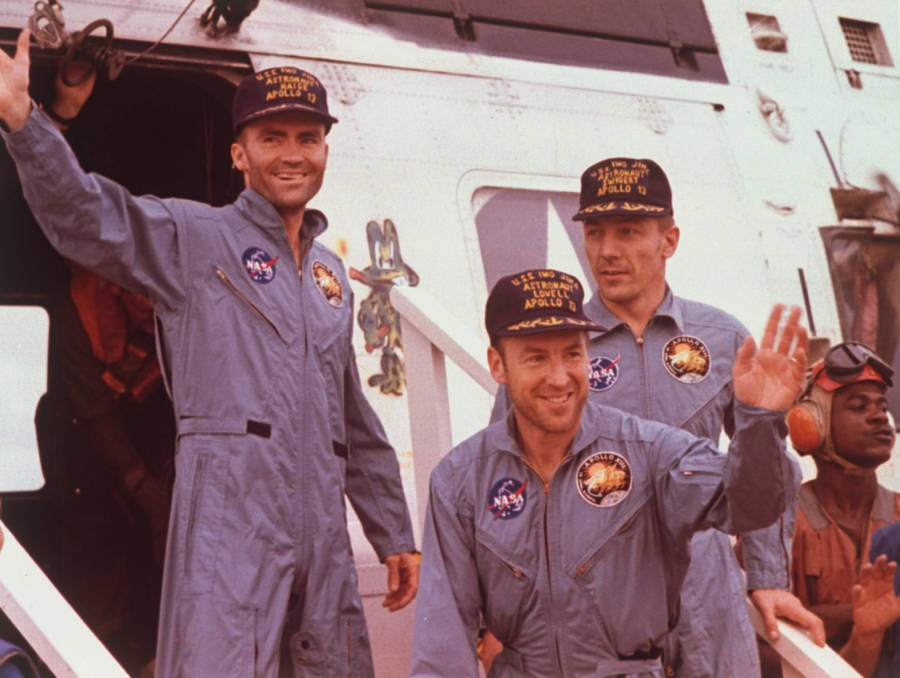 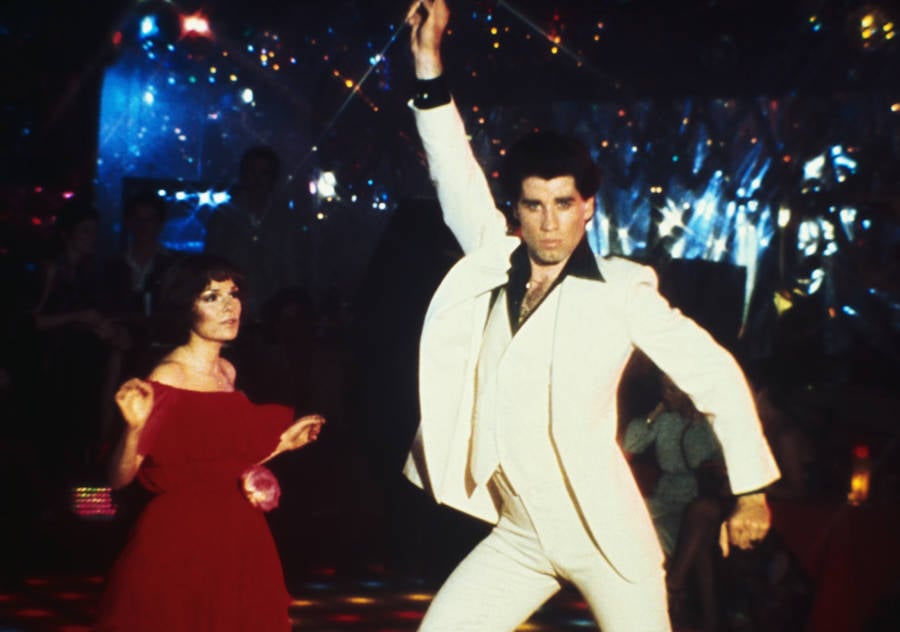 Actor John Travolta dances with actress Karen Gorney in the movie Saturday Night Fever, which brought the culture of disco to the masses. February 27, 1978.Bettmann/Contributor/Getty Images 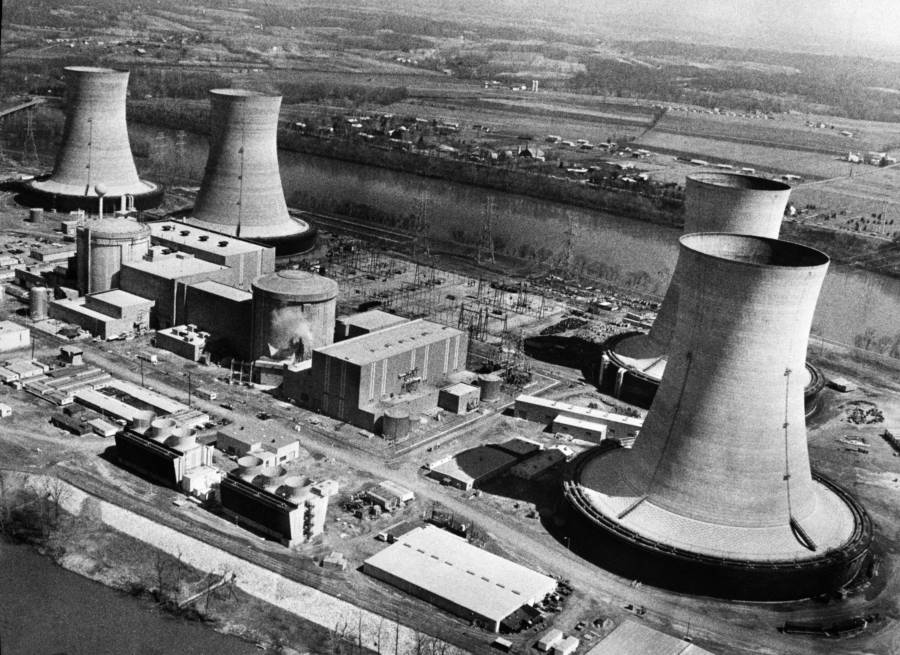 The Three Mile Island nuclear plant on March 28, 1979, the day of the meltdown, the worst of its kind in US history.AFP/AFP/Getty Images

Diana Bryant (bottom) and Tiare Jones fall from the collapsed fire escape of their burning building on Marlborough Street in Boston just before firefighters could save them. July 22, 1975.

Bryant soon died as a result of her injuries, while Jones, who landed on Bryant's body, did not.Cliff/Flickr 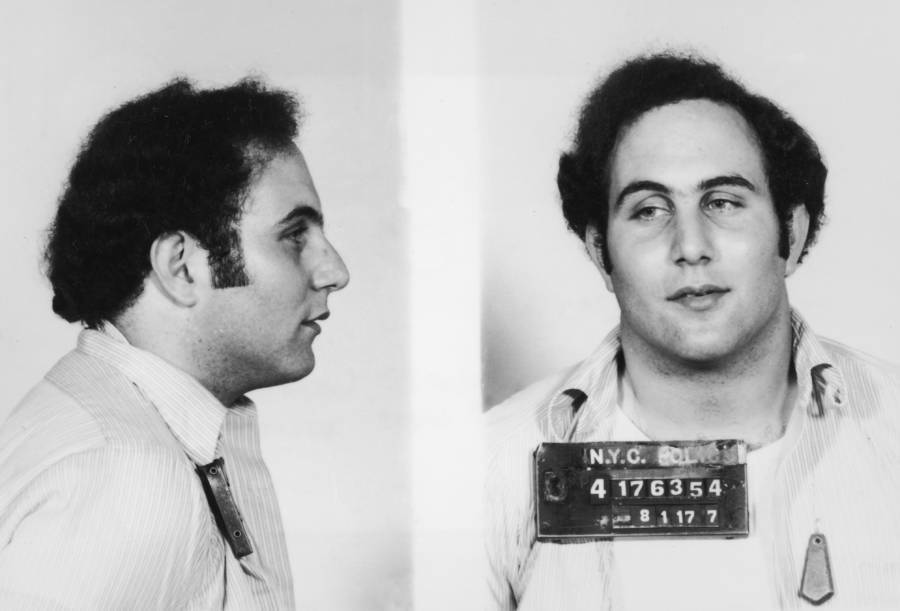 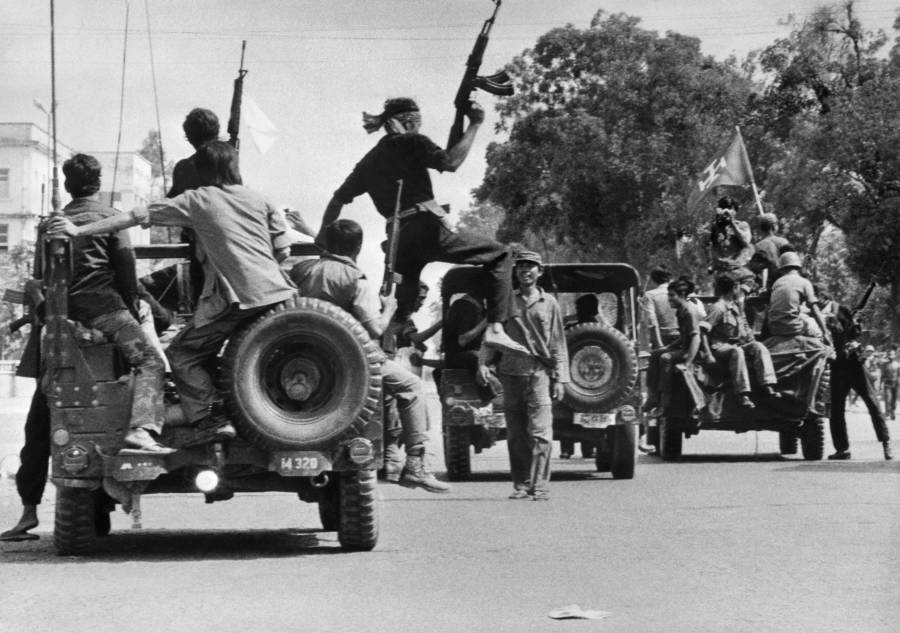 In 1974, Patty Hearst, an American newspaper heiress and socialite, was kidnapped by the Symbionese Liberation Army (SLA). Hearst eventually began to relate to her captors and started to take part in their criminal endeavors. This photography shows her holding an M1 Carbine while robbing a Hibernia bank in San Francisco on April 15, 1974, a crime for which she was arrested the following year.Wikimedia Commons 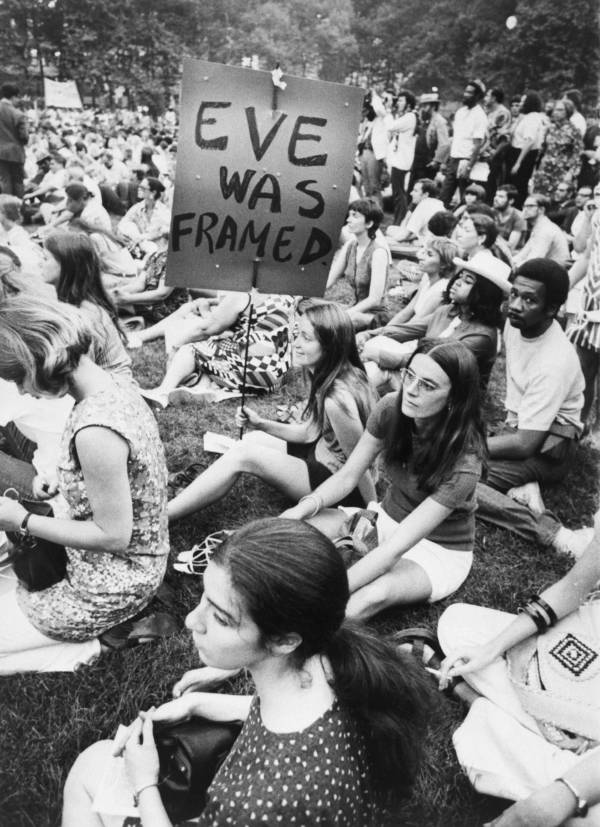 Women sit in protest during the Women Strike for Equality demonstration — emblematic of the growing power of the women's rights movement throughout the decade — in New York's Bryant Park on August 26, 1970.Bettmann/Getty Images 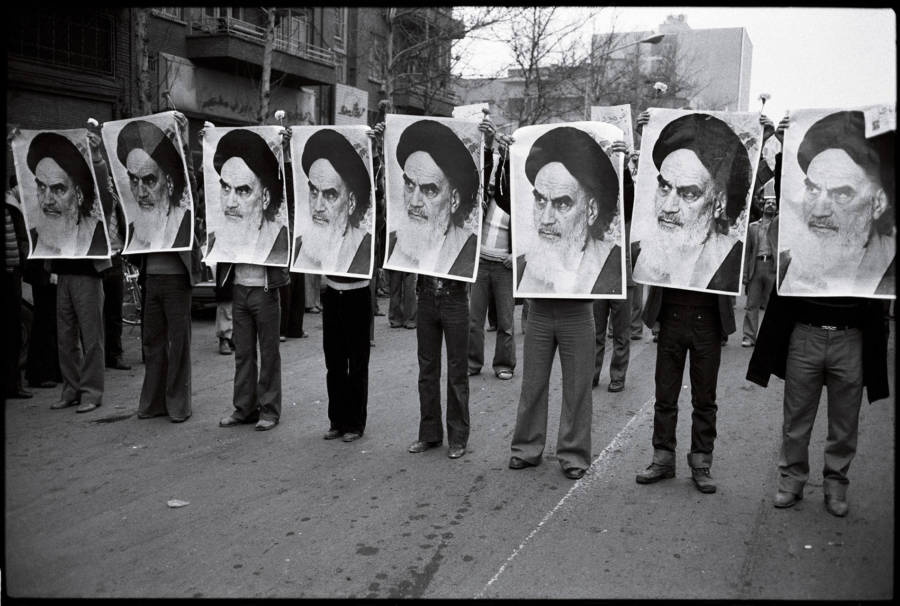 A number of Iranian men hold up photos of Ayatollah Ruhollah Khomeini, leader of the 1979 Islamic Revolution in Iran. Date unspecified.Wikimedia Commons 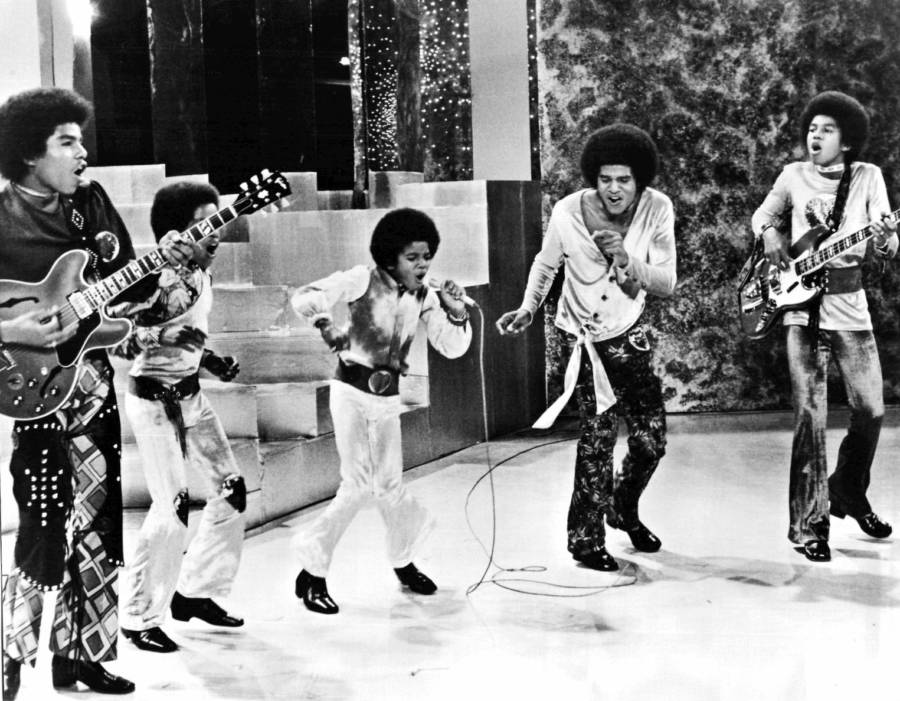 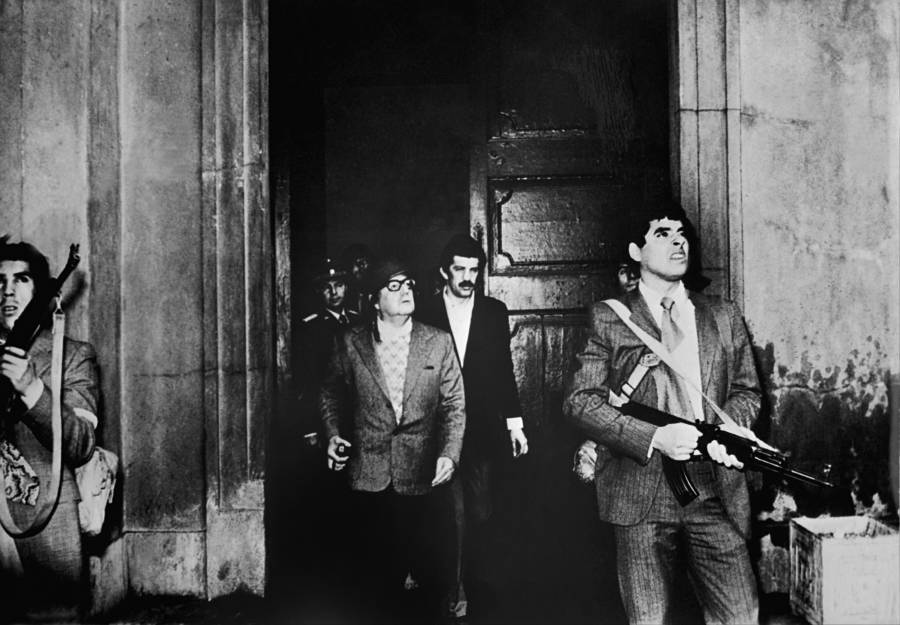 The last photograph of the President of the Chilean Republic, Salvador Allende inspecting the Palace of Modena shortly before his assassination on September 11, 1973. He was killed in an American-backed military coup that placed dictator Augusto Pinochet in control of the country.Keystone-France/Gamma-Keystone/Getty Images 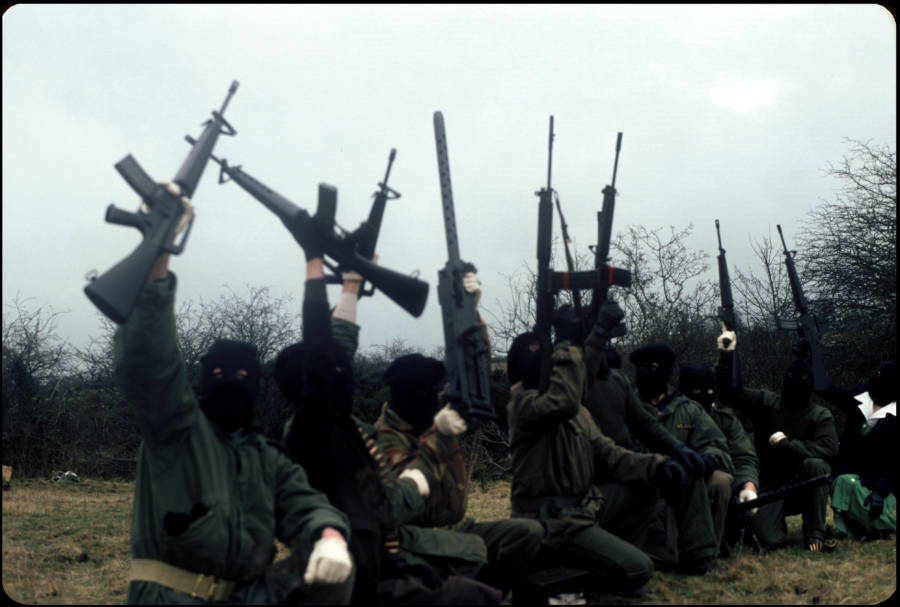 Irish Republican Army gunmen pose during a training and propaganda exercise in Northern Ireland amid The Troubles, a sectarian conflict that pitted the country's Protestant Unionists loyal to Great Britain against the Catholic Republicans loyal to Ireland. February 12, 1977.Alex Bowie/Getty Images 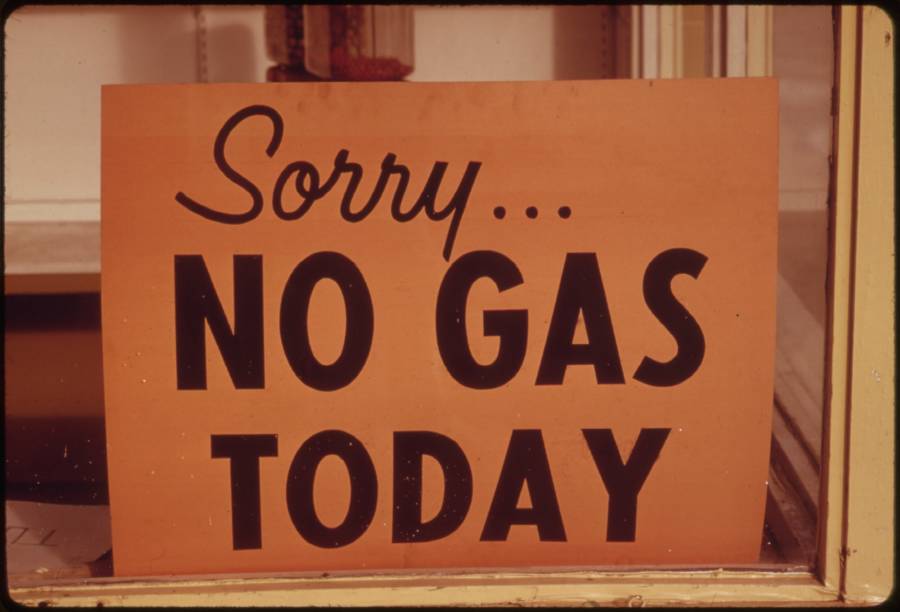 A "No Gas Sign" sits in the window of a filling station in Lincoln, Oregon in the fall of 1973, during the oil crisis caused by an embargo by OPEC nations on the US in response to the US support of Israel during the Yom Kippur War.David Falconer/NARA/Wikimedia Commons 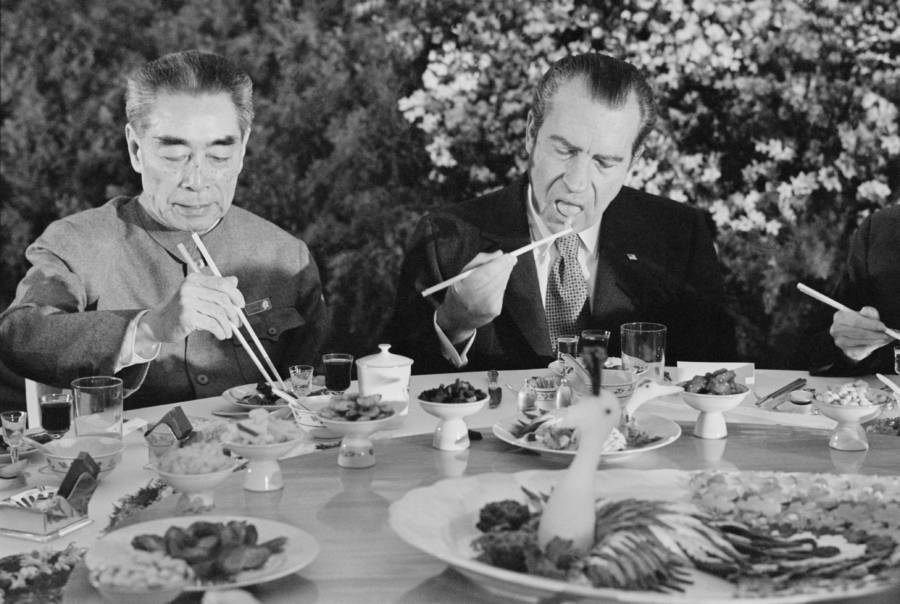 President Richard Nixon eats with chopsticks beside Chinese Premier Chou En-lai during a farewell banquet on the eve of Nixon's departure from China. February 27, 1972.

This trip to China was important in opening up relations between the two countries as Nixon was the first US president to visit mainland China.Bettmann/Getty Images 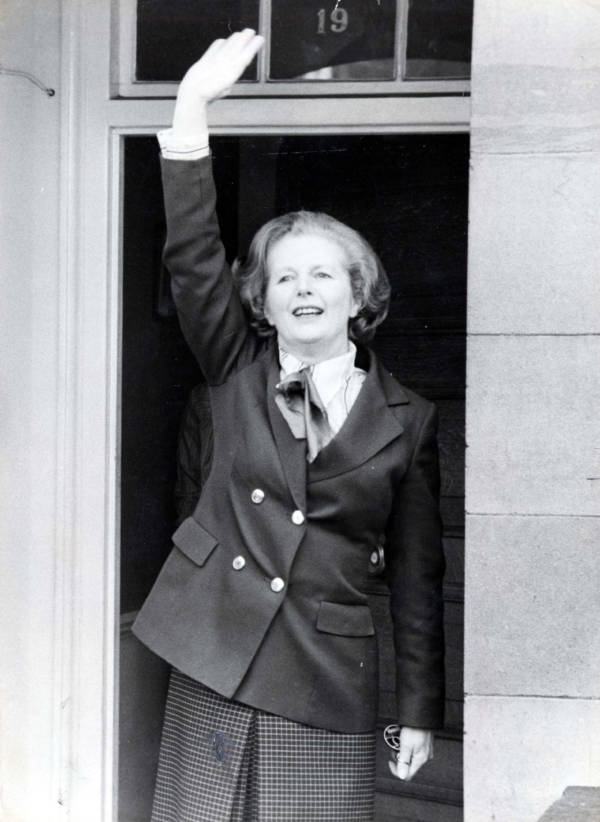 British Prime Minister Margaret Thatcher waves to crowds of well-wishers from the steps of her London home, the morning after winning the UK general election to become the UK's first female Prime Minister. May 4, 1979.Bryn Colton/Getty Images 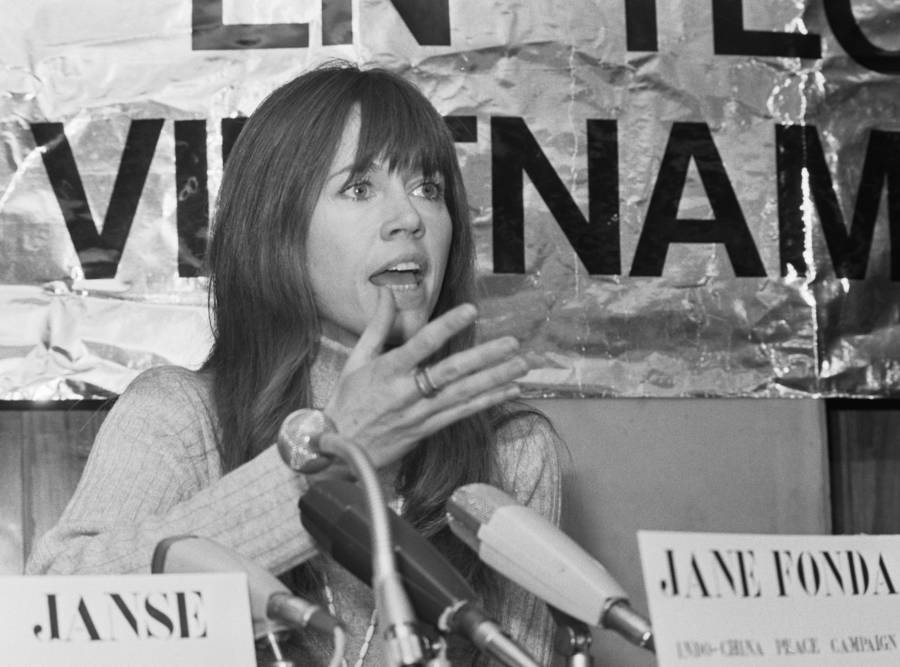 Actress Jane Fonda, an icon of the 1970s anti-war movement, speaks at an anti-Vietnam War conference at The Hague, Netherlands. January 1975.Wikimedia Commons 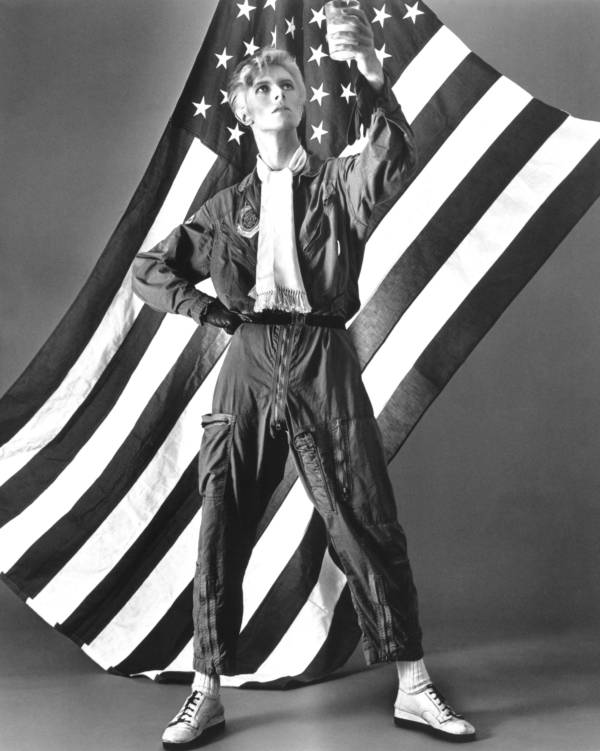 David Bowie poses for a portrait in front of an American flag. 1976.Michael Ochs Archives/Getty Images

The 1970s were a time of great change and turmoil for both America and the world at large.

The Cold War raged on into its fourth decade, with the US going to war in Vietnam and the Soviet Union going to war in Afghanistan. At the same time, countries around the world were either gaining independence or aligning with one of the two massive superpowers.

And within America's own borders, political upheaval ruled the day as well. The culture clash between President Richard Nixon's conservative "silent majority" and the anti-war movement on the Left remained violent and sometimes deadly as the Vietnam War dragged on and on. As it did, many radical political groups fighting for a myriad of causes were able to rise to prominence in this confrontational political climate.

Yet these tumultuous times also helped give rise to cultural forces of extraordinary power and resonance, with groundbreaking musical artists like David Bowie and Pink Floyd rising to prominence.

From the culture to the politics and beyond, the iconic 1970s photos above encapsulate those turbulent times.