Nazi Gold Found On Sunken Ship Could Be Worth $130 Million

The chest was found in the SS Minden, a German cargo ship scuttled near the coast of Iceland in 1939. 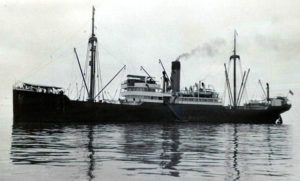 The SS Porta, a sister ship of the SS Minden.

You could never accuse the Nazis of having hearts of gold — but a new discovery shows that when it comes to Nazi vessels, it’s a different story.

Indeed, British treasure hunters have uncovered up to $130 million-worth of gold within the wreckage of the SS Minden, a Nazi cargo ship.
As the Sun first reported, hunters from Advanced Marine Services (AMS) found the sunken goldmine 120 miles off the coast of Iceland, whose government approval the researchers must receive in order to open the chest.

In spite of the ship’s massive historical — and now financial — value, it might be a bit difficult for the AMS crew to get Iceland’s government on board with their proposal to take the chest back to the UK, however. Back in April, the Iceland Coast Guard stopped the crew on another British vessel — the Seabed Constructor — for not having the necessary permits to conduct research in Iceland’s waterways.

The Minden met its end early on in World War Two. While traveling from Brazil to Germany just after war broke out in September 1939, the vessel — carrying up to four tons of valuable metal — became surrounded by the Royal Navy’s HMS Calypso. Hitler reportedly ordered the ship’s sinking so enemy forces could not raid it.

AMS’ discovery is just the latest in a series of Nazi artifactual finds. In June, a trove of Nazi relics were uncovered in a Buenos Aires, Argentina, home. Experts believe were brought to the South American country after the war ended.

Next, see what researchers uncovered in a recent dig of a Confederate submarine.