The Peacekeeper Missile, The Nuclear Weapon So Deadly It Had To Be Banned

While this ultra powerful nuclear weapon was too deadly to stay in use, here's your one chance to see the peacekeeper missile in action. 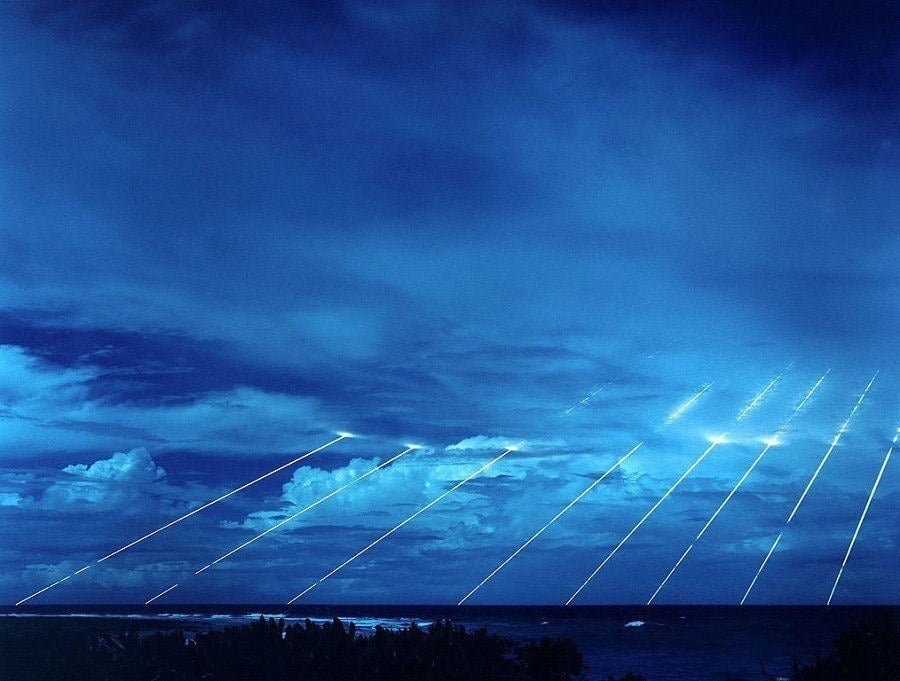 The Peacekeeper missile is anything but peaceful.

These eight lights beaming down on the Marshal Islands like a scene from War of the Worlds is not a sight you’d ever want to see in person. Thankfully, the above photo captured only a test of the eight re-entry vehicles from a single Peacekeeper missile — a missile so deadly the United States agreed to destroy all of them by 2003 as part of the Strategic Arms Reduction Treaty II.

Peacekeeper missiles are more than 70 feet long and weigh more than 198,000 pounds. They can carry up to 11 nuclear warheads that each split and strike different targets, as seen in the image above.

When a Peacekeeper is launched, it is shot 50 feet into the air via pressurized gas, boosted into space on a rocket and guided toward the target with an internal navigation system. The top of the rocket (the re-entry section) detaches and the warheads go their separate ways as they re-enter the atmosphere. This all happens in a matter of seconds.

The first successful test flight (without attached nuclear warheads) was in 1983, launched from the Central Coast of California. The Peacekeeper traveled 4,190 miles and then dropped six re-entry vehicles on the Kwajalein Missile Test Range near the Marshall Islands in the Pacific Ocean. The undated image above shows a similar launch, but with eight re-entry vehicles.

Had this not been a test, and had the re-entry vehicles been armed with warheads, they would have had the blast power of 25 Hiroshima-sized bombs.