The Unfortunate Story Of Pete Best: The ‘Fifth’ Beatle The Band Left Behind

Before Ringo Starr, the Beatles toured with drummer Pete Best, but differences led to his ousting just before the band reached worldwide success.

Before Ringo Starr joined the Beatles as their drummer, there was Pete Best, who played for the band for two years before he was booted in 1962. The following year the Beatles became a phenomenon and sold 12 million records in Britain alone.

Best never spoke to any of the Fab Four again, but why did the others force Pete Best out of the band in the first place? 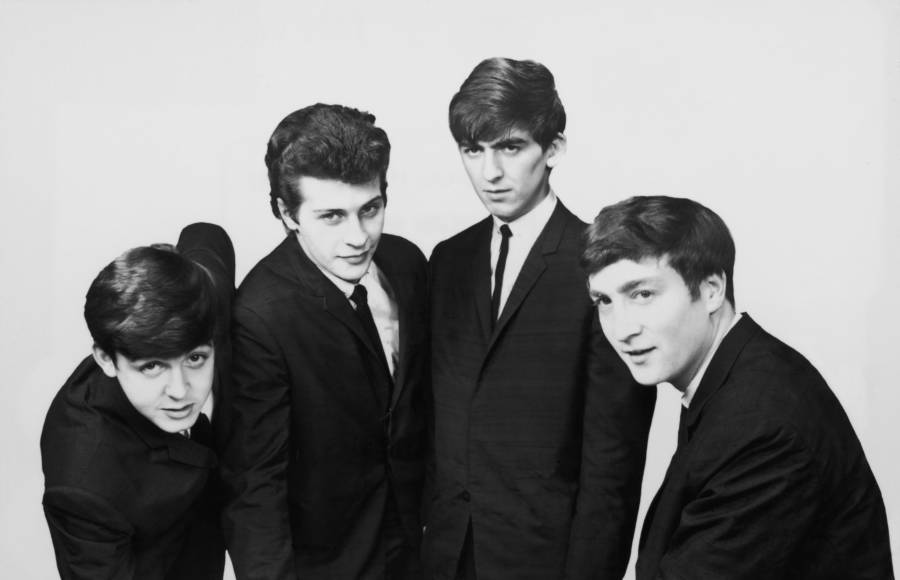 This is the little-known story of one of the Beatle’s forgotten members.

Pete Best was born Randolph Peter Scanland on November 24, 1941, in Madras, British India. His biological father died in World War II and soon afterward, Best’s mother Mona met her future husband Johnny Best while training to become a doctor in the Red Cross. After they married in 1944, the couple moved to Liverpool, England.

Inspired by London coffee bars where up-and-coming singers and bands performed, Mona decided Liverpool needed its own version. In 1959, the basement of the Best family home became the Casbah Coffee Club.

“She had the idea,” Pete Best told The Washington Post in 2003. “She turned a humble coffee club into the catalyst for the Mersey sound [the collective name for Liverpool rock bands during the 1960s]…[E]very band that played here still speaks rapturously about the place.”

It was here that the Quarrymen, an early incarnation of the Beatles, first performed on August 29, 1959. The quartet contained Lennon, Paul McCartney, George Harrison, and Ken Brown. Brown organized the Quarrymen’s weekly residence at Casbah Coffee Club, but a rift over money led to the band booting him out by October.

This spelled the end for the Quarrymen. Their tenure at the Casbah ended, but a week later Lennon, McCartney, and Harrison auditioned on TV Star Search in their new group, Johnny and the Moondogs. Meanwhile, Pete Best got his own drum kit and formed the Black Jacks with Brown, replacing the Quarrymen as the Casbah’s regular Saturday night act. At the time, the Beatles had lost their drummer Tommy Moore, and McCartney had stepped in while Lennon’s friend, Stu Sutcliffe, was on bass.

The Beatles scored a series of gigs at Hamburg’s Indra Club, beginning on August 17 of the next year. But the club’s owner had told Allan Williams, the Beatles’ manager at the time, to bring a five-piece band instead. With time running out, Lennon, McCartney, and Harrison managed to poach Best from the Black Jacks on Aug. 12, 1960, the eve of their trip to Hamburg. The Black Jacks disbanded soon after Best’s defection and Brown never made it as a professional musician. 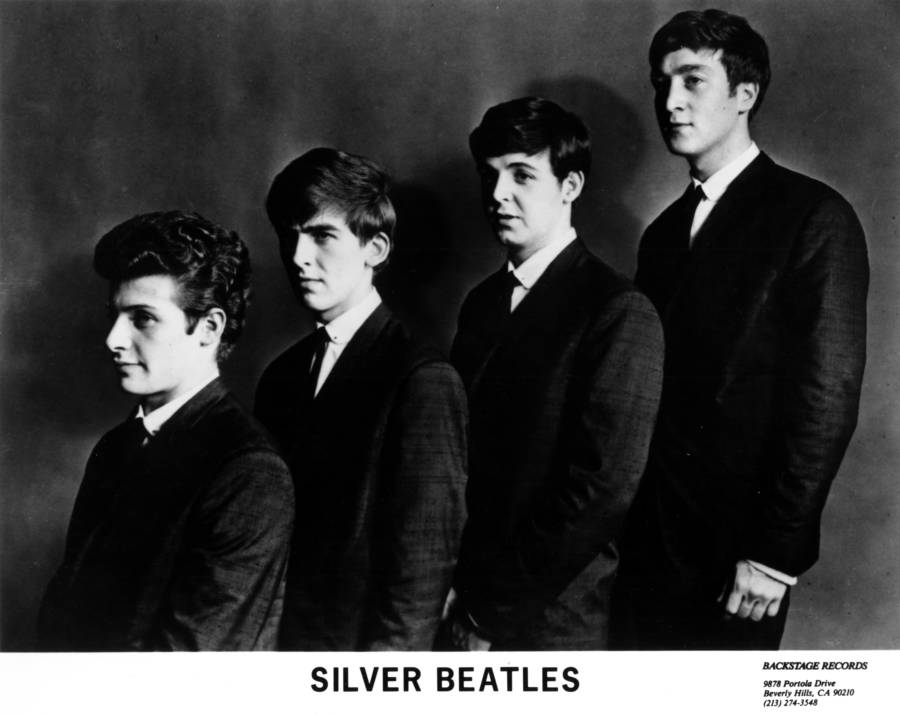 Michael Ochs Archives/Getty ImagesA publicity handout for The Beatles including Pete Best, left, billing them as the “Silver Beatles,” the name by which they were briefly known in 1960 before becoming “The Beatles” that August.

In the documentary Anthology, Lennon stated that hiring Best came from necessity rather than talent. He said, “We knew of a guy, and he had a drum kit. So, we just grabbed him, auditioned him and he could keep one beat going for long enough, so we took him.”

Hamburg in the 1960s was a gritty, creative, and edgy German port awash with gangsters, sex, money, and new music. Within two months of their arrival, the Indra Club where they had been playing closed down and the group moved onto Kaiserkeller, where they played long sets, seven days a week. And despite Lennon’s propensity to greet the German audience with “Heil Hitler,” the Beatles’ popularity grew.

But the most popular with the girls was the temperamental Best. “He was a very good-looking guy,” McCartney said. “And out of all of the people in our group, the girls used to go for Pete.”

Exacerbating existing tensions, the Beatles started doing drugs, especially the amphetamine called Preludin, which helped them to cope with their grueling schedule. Over two and a half years, the band performed 281 concerts in Hamburg. During 1961 alone, they played 98 nights in a row.

The band improved, but the lifestyle wasn’t for everyone. In July 1961, bassist Sutcliffe quit to focus on his art career with a reluctant McCartney taking over on bass. Unfortunately, Sutcliffe died of a cerebral hemorrhage on April 10, 1962, as the Beatles were preparing for their third and final stint in Hamburg.

That very spring, the group signed a record deal with EMI and recorded four demo numbers, including a future hit, “Love Me Do.” But another major shake-up was about to hit.

Lennon, McCartney, and Harrison first met Ringo Starr, born Richard Starkey, in 1959 when he was the drummer for Rory Storm and the Hurricanes which was then one of the most popular groups in Liverpool. Over the years while in Liverpool and touring with the Hurricanes in Hamburg, Ringo would often stand in for Pete Best.

Due to patterns of bad behavior, Pete Best gained a reputation for being unreliable. “Pete kept being sick and not showing up for gigs,” recalled Harrison in Anthology. “So we would get Ringo to sit in with the band instead, and every time Ringo sat in, it seemed like ‘this is it.’ Eventually, we realized, ‘We should get Ringo in the band full time.'”

Lennon, McCartney, and Harrison also thought Ringo was a superior drummer from the start. “[T]he greatest drummer in our eyes was a guy, Ringo Starr…” McCartney said in Anthology. But according to Tony Sheridan, who played with both Best and Ringo in Hamburg, both had the same problem: missing the backbeat.

The difference was that Starr was ambitious, and Best wasn’t. “He was more intent on becoming a good drummer,” Sheridan told The Washington Post. “Pete was less intent. He was a bit lazy.” Eventually, the new Beatles re-recorded “Love Me Do” with Starr which went on to be a hit. 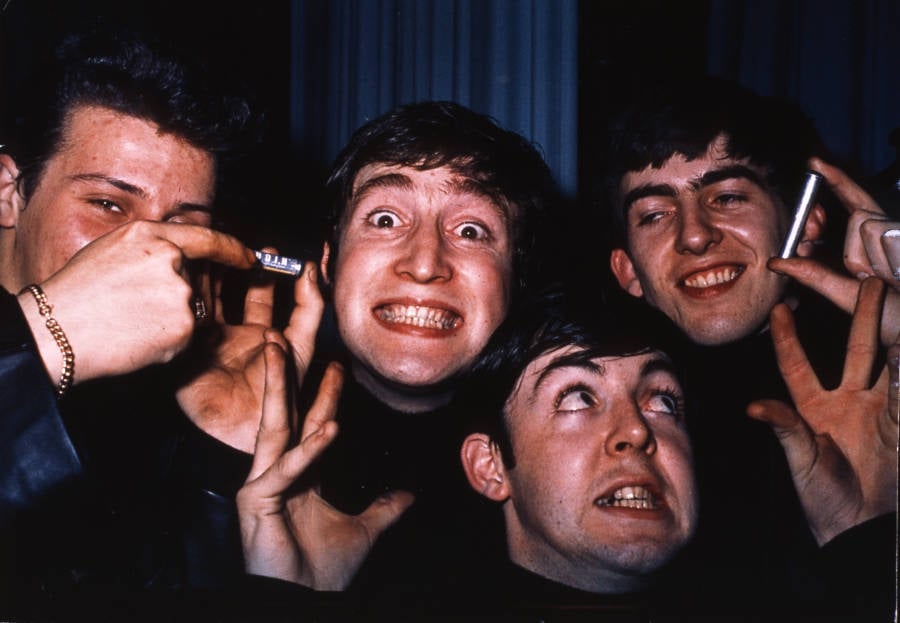 Horst Fascher/K & K Ulf Kruger OHG/Redferns/Getty ImagesThe Beatles with Best, left pose in Hamburg, Germany during their residency at the Star-Club. May 1962.

Ringo seemed the better fit in part because McCartney allegedly felt jealous of Best’s good looks. Lennon insisted, however, that the two simply “didn’t get on that much together, but it was partly because Pete was a bit slow. He was a harmless guy, but was not quick. All of us had quick minds, but he never picked that up.”

In the end, the Beatles’ audition for Parlophone Records, on June 6, 1962, led to Pete Best’s ousting from the group. Epstein had failed to drum up any interest from any other record company in London, so when music producer George Martin agreed to sign the Beatles to Parlophone Records and expressed misgivings about Best’s drumming, the group listened.

Martin told Epstein he preferred to use a session drummer for recording. On Aug. 16, Epstein told Best the bad news: He had to leave the band. Later, Best would claim that he never knew the real reason why the group let him go.

Three days after Epstein fired Pete Best, Ringo played his first gig as a bonafide member of the Beatles. As the Beatles became the biggest band in pop history, Best faded into relative obscurity. However, many fans initially protested at concerts, shouting, “Pete forever, Ringo never” or “Pete is Best.” Some girls even slept outside his house in support.

But at home, he lost the support of his friend Neil Aspinall, who was the Beatles’ first roadie. Aspinall had started a relationship with Best’s mother. The couple later had a child together called Roag; Aspinall became part of the Beatles’ inner circle, and later, after the group disbanded, handled the Beatles’ ongoing business.

Best didn’t handle the break with the Beatles well. He set up another band, The Pete Best Combo, but he expressed in his autobiography that he felt there was an invisible shield preventing him from experiencing success beyond his hometown.

A Break With Music

Peter Best fell into progressively deeper levels of depression which culminated in a suicide attempt in 1965. Another brother, Rory, broke down his bedroom door to find Best inhaling fumes from a gas fire.

In 1968, he filed a libel suit against his former bandmates. Lennon and Starr suggested in an interview with Playboy magazine that they’d fired Best for drug use. Ringo’s exact quote was that “He took little pills to make him ill.” Later, they settled out of court for an undisclosed figure.

That same year, while the Beatles were recording “Back in the U.S.S.R.,” Best quit the music business to pack loaves at a bread factory. He had met his wife, Kathy, at an early Beatles show in 1963, and though his downward spiral had been quick he needed regular and steady work to support her and their daughters. 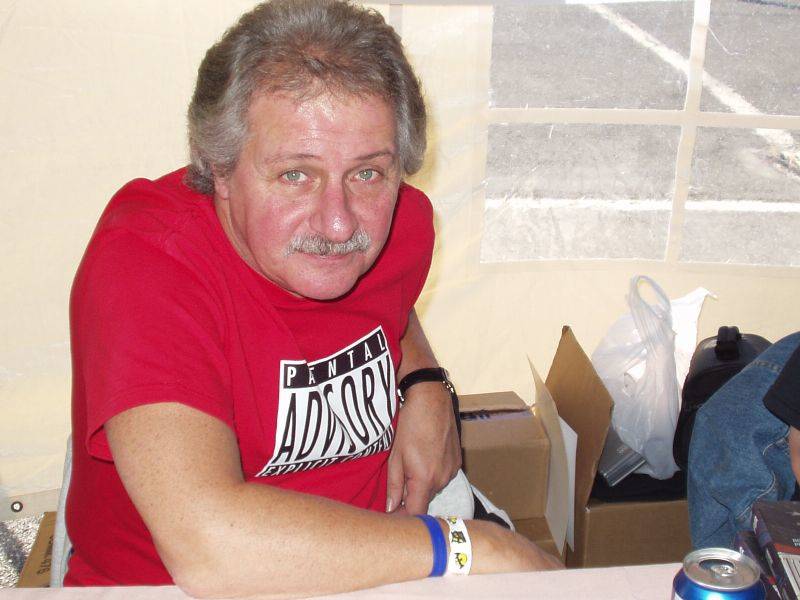 For twenty years, Best put aside all thoughts of a music career and worked instead in civil service. But in 1988, he performed at Liverpool’s Adelphi Hotel. “I’d always found an excuse not to do it. This time, however, I ran out of excuses and put together a little band with my youngest brother Roag playing drums alongside me,” Best told the Liverpool Echo in 2017.

Best formed The Pete Best Band and started touring. Things started looking up. Perhaps he might finally have a modest music career after all. But he wasn’t finished with the Beatles, either. In 1995, the Beatles released their Anthology retrospective which included Best on drums in a number of tracks. This entitled him to a cut of the royalties, estimated to range between $1.3 million and $5.2 million.

Regardless of his earnings, Pete Best appears to have made peace with his past. He even recently played himself in Lennon’s Banjo, a play about finding Lennon’s first instrument. But more importantly to Best, he is still playing music professionally.

Next up, check out these pictures of the early Beatles. Then, learn about the secret meanings behind your favoriteBeatles songs.