How Did Phil Hartman Die? Inside His Murder At The Hands Of His Wife

When comedian Phil Hartman was murdered by his wife Brynn inside their Los Angeles home on May 28, 1998, America was devastated — but his friends had seen the warning signs for years.

On May 28, 1998, Phil Hartman died at the age of just 49 — when his wife Brynn Omdahl Hartman murdered him inside their Los Angeles home before killing herself. America was shocked to see the headlines about how Phil Hartman’s wife shot him dead in a grisly murder-suicide. However, to friends who’d known the couple for years, Phil Hartman’s death was a long time in the making.

At the time, Hartman was celebrated as one of the funniest comedians in America, thanks to his work on hits like Saturday Night Live and The Simpsons. And while many comedians have been known for the dark personal lives lurking behind their humorous onscreen presence, Phil Hartman’s story ultimately proved to be especially tragic. 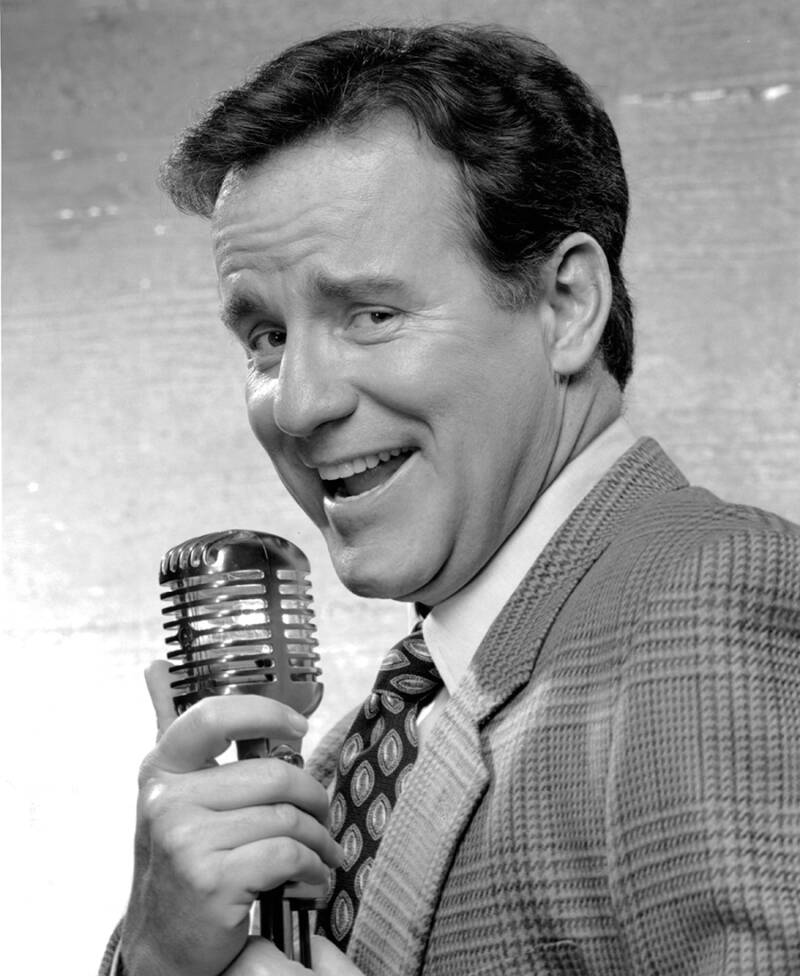 Michael Ochs Archives/Getty ImagesActor and Comedian Phil Hartman poses for a portrait in circa 1990.

Born in September of 1948 in Ontario, Canada, Phil Hartman was the fourth of eight children in a devout Catholic family. Yet with so many siblings vying for their parent’s love, Hartman found it difficult to earn attention and affection.

“I suppose I didn’t get what I wanted out of my family life,” Hartman said, “so I started seeking love and attention elsewhere.” This need for attention undoubtedly spurred the young Hartman towards acting out in school, and after the Hartman family moved to the United States when Hartman was 10 years old, he began to earn a reputation for being a class clown.

Hartman would eventually go on to study graphic arts at California State University which ultimately afforded him the opportunity to open his own graphic design company. His company was successful, with Hartman’s business helping to create over 40 album covers for various bands including Poco, America, as well as the logo for Crosby, Stills, and Nash.

It was during his time working in graphic design that Phil Hartman finally discovered a passion for comedy when, in 1975, he began attending classes with the comedy group The Groundlings. In a 2014 New Yorker article highlighting the Phil Hartman biography by Mike Thomas entitled You Might Remember Me, Hartman is rightfully remembered for the almost immediate way he took to performing comedy:

“As Thomas tells it, Hartman was instantly good, a performer whose ‘utter commitment begat brilliance,’ an indispensable ‘utility player’ who could be ‘counted on in all scenarios.’ Comedic actor Jon Lovitz, also a Groundling at this time, considered Hartman a ‘big star,’ someone who could be told to play a shoe salesman and deliver something jaw-dropping: ‘Whatever he was going to imagine or say was nothing you could imagine or think of … He could do any voice, play any character, make his face look different without makeup. He was king of the Groundlings.'” 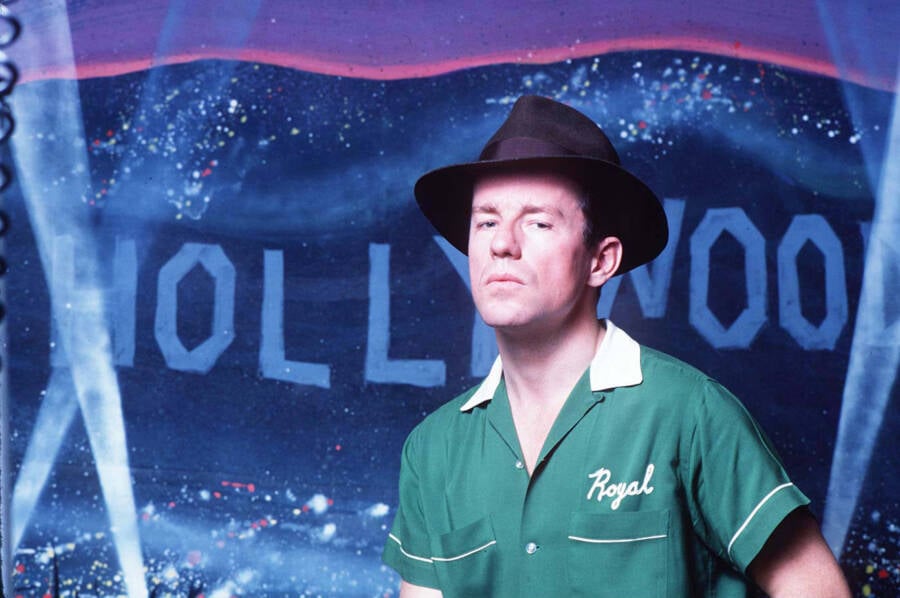 Ann Summa/Getty ImagesPhil Hartman In “The Groundlings.” Los Angeles. May 1984.

Thanks to his undeniable charisma and talent, Phil Hartman began to garner more praise and work. Voice work and small roles in films began to come in as well. Hartman even assisted fellow Groundling Paul Reubens to develop his now-iconic PeeWee Herman character. It was then in 1985 that Phil Harman met Brynn Omdahl, the woman who would become his third wife and, ultimately, his killer. Tragically, the seeds of Phil Hartman’s death were sewn long before the horrific event itself actually occurred.

The two met at a party. Omdahl was sober at the time despite the fact that she had had a sordid history with drugs and alcohol. In You Might Remember Me, Mike Thomas explains that:

“When Phil met Brynn, he may well have been at his most vulnerable state in years—his second marriage’s ending had shaken him, and his performing career wasn’t taking off. Omdahl was strikingly beautiful, and the affections of a statuesque blonde may have bolstered Hartman’s deflated self-image. But their relationship was bumpy from the get-go.”

Nevertheless, Hartman pressed forward with his comedy career. After working with Reubens on the hit film PeeWee’s Big Adventure, he was hired as both a writer and performer at Saturday Night Live in 1986 — alongside some of the show’s most high-profile performers such as Dana Carvey, Kevin Nealon, and Jan Hooks.

During Phil Hartman’s tenure at the show, he created some of the program’s most beloved characters and perfected some of his most uncanny impressions. From his abrasive Frank Sinatra to his wonderfully silly Unfrozen Caveman Lawyer, Hartman had a knack for playing seedy or self-important characters who, despite their egos, were still lovable and fun to watch.

In 1990, on the heels of his successful performances on Saturday Night Live, Phil Hartman began to play various roles in another classic television show: The Simpsons.

Staying true to his wheelhouse of playing wonderfully self-absorbed or slimy characters, Hartman originated the roles of Lionel Hutz, the second-rate lawyer; Troy McClure, the C-list Hollywood actor; and Lyle Lanley, the charming con-man from the universally praised Conan O’Brien-penned episode “Marge Vs The Monorail”.

By the time Phil Hartman left Saturday Night Live in 1994, there was no denying the fact that the tone of the show had begun to change thanks in part to the arrival of new cast members with particularly silly and absurd sensibilities like Adam Sandler and Chris Farley.

After nearly 10 years in New York with the sketch comedy show, Hartman, his wife, and their two children moved back to California where Hartman was able to focus on his latest project, an ensemble comedy show called NewsRadio.

Here, Hartman once again got to do what he did best — play a smug but endearing radio announcer named Bill McNeal. The show was smartly written and a critical and commercial success, running for five seasons — four of which included Hartman. 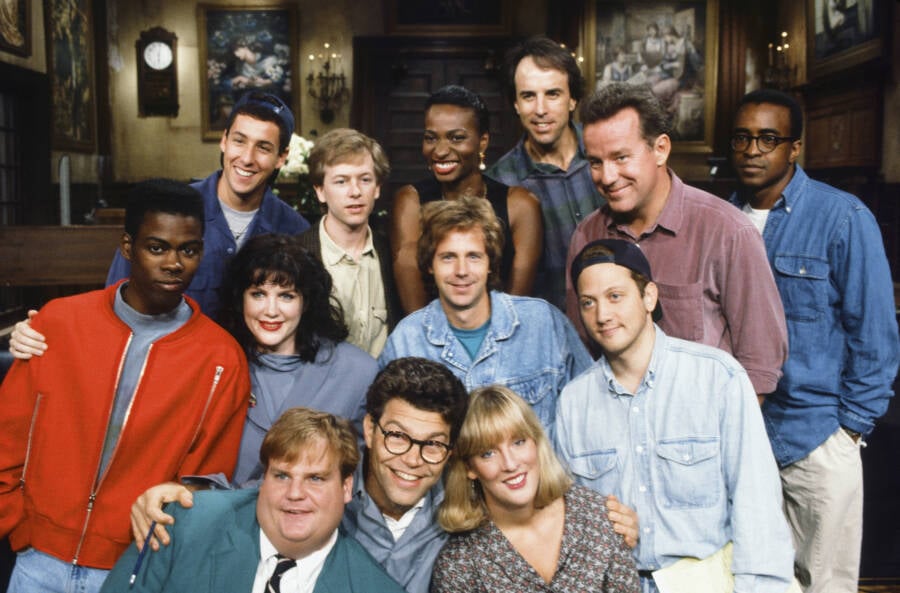 After making the move back to California, Brynn Omdahl began to struggle once again with substance abuse, a factor that eventually figured heavily into Phil Hartman’s death. The two were known to fight and threats were sometimes made and friends and family of Hartman were often not shy about the fact that they found Omdahl to be an unsettling presence.

In 1987 when Hartman had confided in his friend and fellow Groundlings performer, Cassandra Peterson, that he planned on proposing to Brynn Omdahl, Peterson reportedly exclaimed “Oh god, no!” Peterson was then asked to leave Hartman’s office and the two did not speak again for years. Recalling the incident, Peterson said; “It’s the first time — and, I think, last time — I ever saw him angry.” 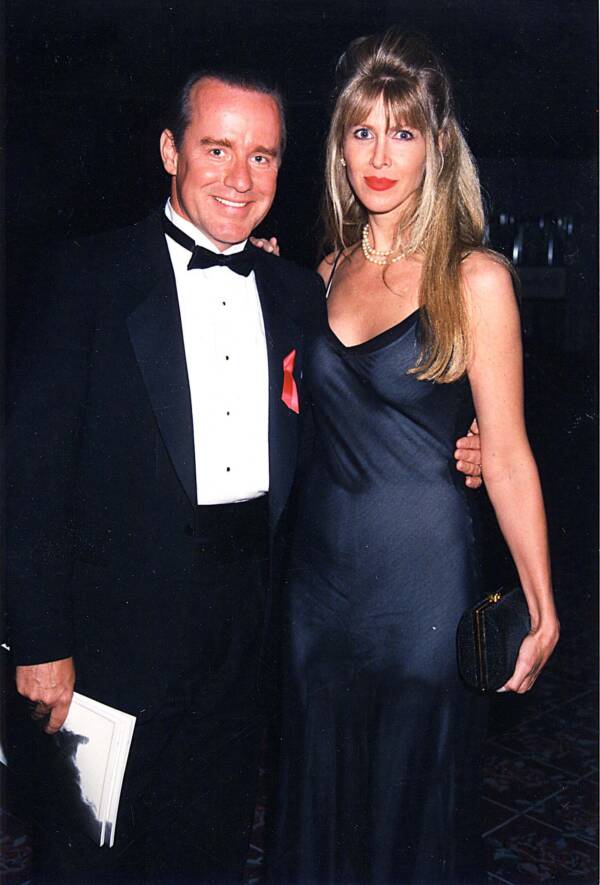 Jeff Kravitz/FilmMagicPhil Hartman and his wife Brynn Omdahl Hartman at an HBO event in 1998.

In addition to Cassandra Peterson’s strong feelings about Omdahl — now Brynn Hartman after they wed in 1987 — Hartman’s second wife, Lisa Strain, had her own run-ins with Hartman’s third wife.

Despite the fact that Strain and Hartman had divorced, the two remained close friends; but when Strain had sent the Hartmans a congratulations card after the birth of their son Sean, Lisa Strain was not met with a thank you, but rather a death threat from Brynn Hartman.

In the late 1990s as the Hartmans’ relationship began to deteriorate and Brynn Hartman spiraled deeper into the depths of substance abuse, friends and family had no idea about the violence that was about to erupt, culminating in Phil Hartman’s death.

Both Hartmans kept guns in their home and, oftentimes, Brynn Hartman would pick fights before bed. Phil Hartman developed a routine where he would pretend to be asleep as a way to avoid his wife’s abuse and her manic behavior.

How Did Phil Hartman Die? 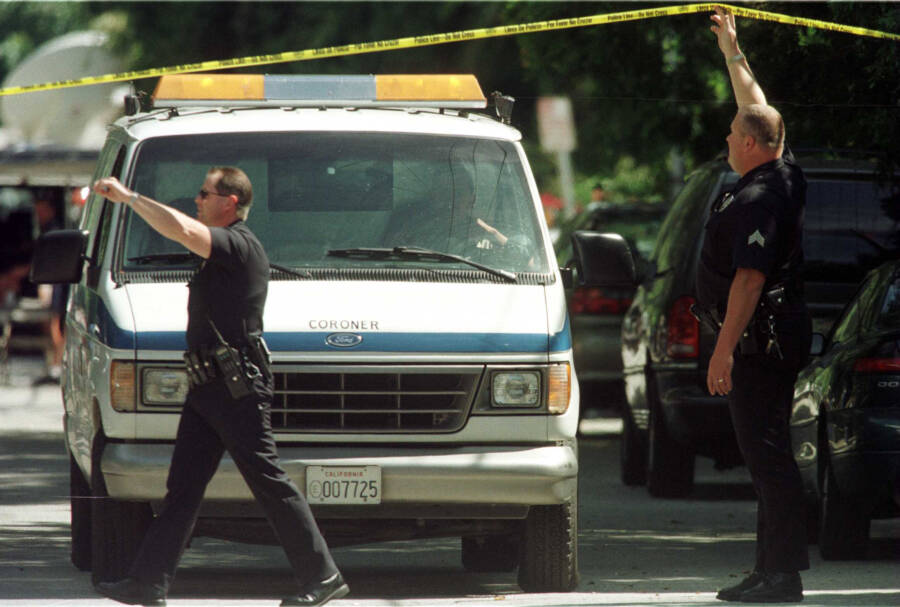 John Chapple/OnlineUSA/Getty ImagesA Coroner’s van transports the bodies of Phil Hartman and his wife from their home. Encino, California. May 28, 1998.

On the night of May 27th, 1998, Brynn Hartman had gone to dinner with a friend who had later said that she had been in “a good frame of mind”. After she returned home, Brynn is said to have argued with Hartman.

Phil Hartman was angry with his wife for a previous incident where she had hit their daughter while she was under the influence of alcohol and Hartman had threatened to leave his wife if she began to use drugs again or caused further harm to their children. Hartman then went to bed.

It was then sometime before 3:00 AM that Brynn Hartman entered the bedroom where Hartman slept and shot him between the eyes, in the throat, and in the chest. She was intoxicated and had just snorted cocaine.

In a state of shock, Brynn Hartman quickly left the house and drove to visit a friend, Ron Douglas, where she confessed to the killing. Possibly due to the fact that Brynn Hartman was prone to dramatic and manic outbursts, her friend did not initially believe her admission.

The two drove back to Hartman’s house and upon seeing Hartman lying shot to death in the couple’s bed, Douglas called 911. By the time the authorities arrived, Brynn Hartman had barricaded herself in the bedroom where she then took her own life with the same gun she had used earlier to kill her husband.

The couple’s two children were escorted from the home and were later raised by family members. As news spread of the shocking murder-suicide, tributes began to roll in from all around the show business world. Rehearsals for The Simpsons were canceled for the day as well as performances from The Groundlings.

His character on NewsRadio was said to have suffered a heart attack, and Hartman’s longtime friend and former SNL colleague Jon Lovitz filled in for him during the show’s fifth and final season.

In the wake of his passing, NBC executive Don Ohlmeyer said that Hartman “was blessed with a tremendous gift for creating characters that made people laugh. Everyone who had the pleasure of working with Phil knows that he was a man of tremendous warmth, a true professional and a loyal friend.”

Others who commented on Phil Hartman’s death included Steve Martin, The Simpsons creator Matt Groening, and many more. In the years since Phil Hartman’s death, he has consistently been named one of the all-time great performers in Saturday Night Live’s storied history.

Like many stars of the long-running sketch show before him, Hartman had joined the sad but revered ranks of stars who were gone too soon, such as John Belushi, Gilda Radner, and Chris Farley.

And while Hartman’s career came to an abrupt and unfair end, his legacy continues to live on and inspire. It took a rare and unique talent such as Hartman’s to turn smarmy characters into much loved cultural icons, and it was a rare and unique person who could take fame in stride and continue to be kind, warm, and gentle. Phil Hartman could, and did, do both.