How The Philadelphia Experiment Became Famous Despite Never Happening

The Philadelphia experiment on the USS Eldridge remains one of the most famous governmental experiments to date. The only problem? It likely never happened.

If the stories are to be believed, the Philadelphia Experiment went something like this.

As it sat in the Philadelphia Naval Shipyard in 1943, the newly commissioned destroyer USS Eldridge was being outfitted with several intriguing devices. These included top-secret generators that were said to be able to make the ship completely invisible to the enemy. 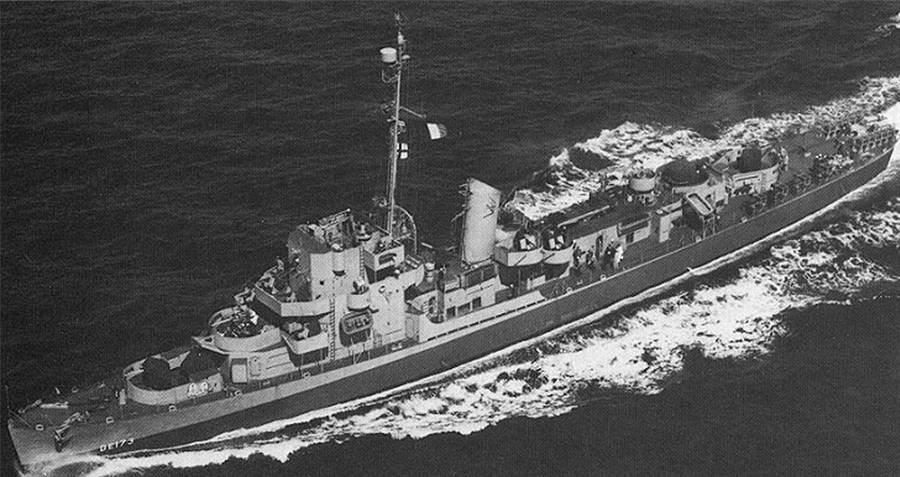 Wikimedia CommonsThe USS Eldridge, the ship at the center of the Philadelphia Experiment.

As the final generators were put into place, the crew readied themselves for the system test. There, in broad daylight on a clear summer’s day in the middle of the shipyard, the generators were switched on and a greenish-blue glow surrounded the ship.

Before the crew’s eyes, the ship disappeared entirely.

Witnesses in the Norfolk Naval Shipyard in Virginia reported seeing the Eldridge appear in their waters before it disappeared just as rapidly. Hours later, it showed up back in Philadelphia.

Crew members aboard the ship reported nausea, insanity, and burn marks. Others reported being entirely embedded within the metal structure of the ship, having fallen through floors, or walls during the time it was missing. Some claim to have re-materialized inside out, or not at all.

The only problem with the tale? According to prevailing wisdom, it never happened. 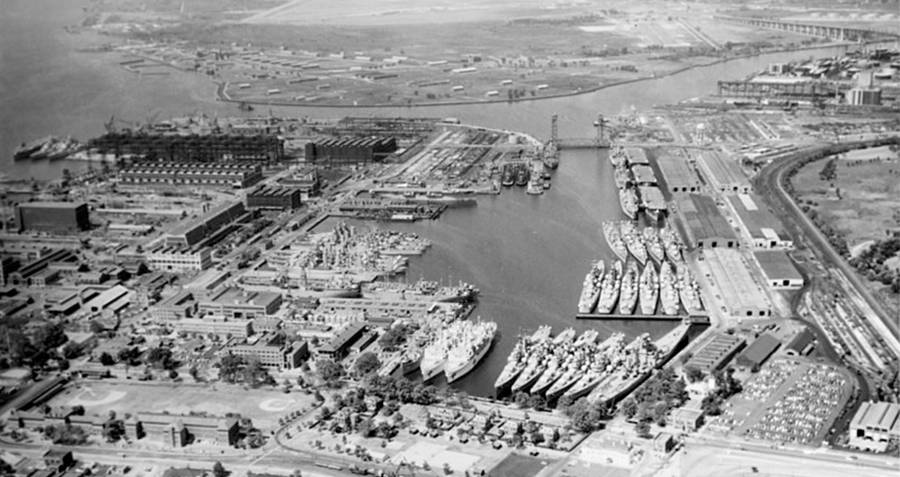 Wikimedia CommonsThe Philadelphia Naval Shipyard, where the USS Eldridge was docked during the alleged Philadelphia Experiment.

Starting At The Beginning

The story of the Philadelphia Experiment has lived on for decades, despite the fact that much of what is known is pure conjecture. Of the hundreds of stories and details that have been thrown around over the years, only a few things are known for certain.

The first of these is that one Morris K. Jessup, an astronomer specializing in the propulsion of unidentified flying objects (UFOs), received a letter from a man named Carlos Allende (also known as Carl Allen) who claimed to have witnessed a secret experiment in the Philadelphia Naval Shipyard.

Allende claimed that he was aboard the SS Andrew Furuseth in Philadelphia in 1943 when he witnessed the naval ship USS Eldridge become invisible before reappearing in Virginia, disappearing again, and appearing back in the Philadelphia Naval Shipyard.

He also declared that the experiment was proof of Einstein’s unified field theory, which Allende claimed taught him the theory.

Jessup attempted to investigate Allende’s incredulous claims, though he could not find any physical evidence to support them. Eventually, he wrote Allende off as a fool.

The story might have ended there and then, but in 1957, Jessup was contacted by the Office of Naval Research with a strange report.

They told him they’d received a copy of Jessup’s book The Case for the UFO, which detailed how UFO’s might be able to fly.

The book was annotated with notes in three different handwritings, one of which supposedly belonged to an alien. These notes claimed to have an advanced understanding of physics and extraterrestrial technology.

The uncommon use of capitalization and punctuation led experts to believe that the annotator was, at the very least, not a native English speaker.

Jessup himself believed the annotations were the work of Allende, the mysterious letter writer. The annotators discussed the merits of Jessup’s claims and referenced the “Philadelphia Experiment” multiple times.

For reasons that remain unclear, the ONR decided to publish 127 copies of the annotated book. They were instantly dubbed the “Varo editions” after their publisher, Varo Manufacturing. So, the story of the Philadelphia Experiment was given new life.

Apart from Allende’s claims and the Varo annotations, all reports of the Philadelphia Experiment have been uncorroborated, considered a hoax, or brushed aside, as the claims simply do not conform to the laws of physics.

The government organizations that were allegedly involved declare that it never happened, and indeed no documents have ever been found. Truly, the mysterious annotated manuscript of Jessup’s book seems to be the only written mention of the Philadelphia Experiment.

Over the years, the Philadelphia Experiment has become somewhat of a gambit amongst conspiracy theorists.

Everyone has their own version of events or explanations as to what could have caused the alleged disappearance and teleportation of an entire naval destroyer, ranging from government contact with aliens to paranormal interference.

The sole fact that Carlos Allende seemed to be the only witness to such a large-scale event seemed to hold most right-minded people back from believing the story. However, in 1988, Allende was joined by another witness.

A man named Al Bielek came forward in 1988, four years after Hollywood had gotten their hands on the story of the experiments and released a movie.

Bielek claimed that he was aboard the Eldridge when it disappeared and that he had been brainwashed to forget it. It was only upon seeing the movie’s depiction of the event that the memories had come flooding back. 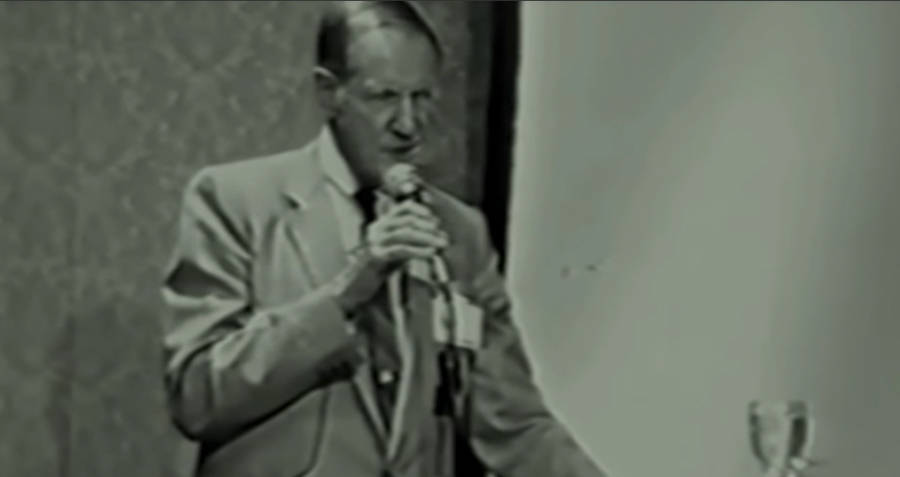 YouTubeAl Bielek, the man who claimed to be a survivor of the Philadelphia Experiment.

Despite the fact that there were now two men who claimed to have firsthand knowledge of the test, the idea that it was a hoax still dominated conversations about the Philadelphia Experiment.

A More Sensible Explanation Behind What Happened To The USS Eldridge

Today, most people are inclined to believe the explanation put forth by Edward Dudgeon, a man who had worked as a Navy electrician and was stationed near the USS Eldridge in the summer of 1943.

According to Dudgeon, generators were indeed placed on both the Eldridge and his ship — the USS Engstrom, to make the ships invisible.

However, the term “invisible” did not apply to the ship’s physical appearance but rather its ability to be detected by the magnetic torpedos fired by German U-boats. In fact, this process had its own name: degaussing.

Dudgeon also had logical explanations for the ship’s greenish-blue glow and appearance in Norfolk, Virginia.

The glow, he said, was likely the result of a lightning-like phenomenon known as St. Elmo’s Fire.

Meanwhile, the fact that the ship seemingly appeared out of thin air in Virginia before reappearing quickly in Philadelphia was explained by inland canals, which were off-limits to civilians and could shorten a two-day commercial journey to just six hours.

Even though Dudgeon put forth an excellent explanation for the Philadelphia experiment, there are still those who choose to believe the more exciting version. As there are no official documents explaining what transpired, technically speaking there’s no proof for either story.

As for the USS Eldridge itself, it was transferred to Greece and rechristened the HS Leon before being used in exercises during the Cold War. Now, it lies in pieces, after being sold for scrap metal in the 90s.

Kind of an underwhelming end for a ship claimed to be able to turn invisible and teleport.

After reading about the Philadelphia experiment and the USS Eldridge, check out the Stanford prison experiment, and the Helmut Kentler pedophilia experiment.