Created with psychology and science in mind, the Stanford Prison Experiment turned regular people into monsters. 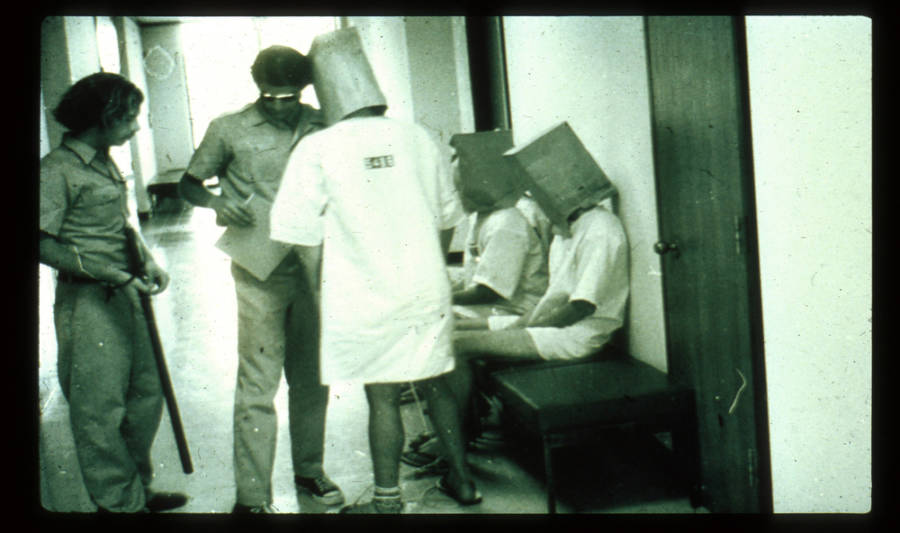 PrisonExp.orgPrisoners with bags forced over their heads await their “parole hearing,” their release from the Stanford Prison Experiment upon its conclusion.

In October 2004, U.S. Army Staff Sergeant Ivan “Chip” Frederick was facing some hard time. He had been one of the accused in the notorious torture scandal that erupted in March of that year from Iraq’s Abu Ghraib prison, and his court-martial saw disturbing details aired about prisoner abuse, sleep deprivation, and sexual humiliation.

One of the witnesses that Frederick called to defend him — and arguably one of the reasons he only got eight years for his crimes — was Stanford psychologist Philip Zimbardo, who argued that Frederick’s actions weren’t necessarily a reflection on his character, but were instead a reaction to the environment that the higher-ups had allowed to develop in Abu Ghraib.

Frederick’s actions, Zimbardo argued, were the predictable outcome of his assignment, rather than the isolated acts of a “bad apple,” which had been the Army’s approach to shifting blame onto certain individuals.

At the court-martial, Zimbardo was able to speak with a certain expertise on the subject of prisoner abuse because he had once participated in it himself. 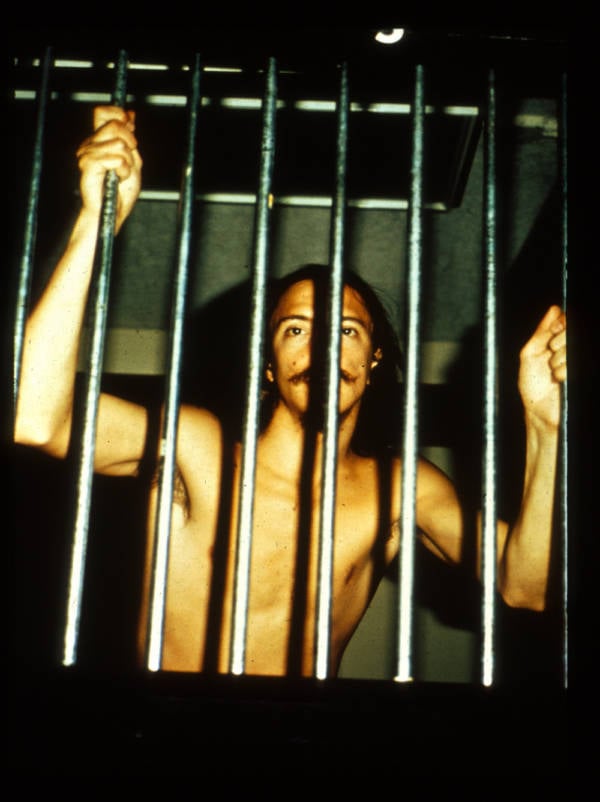 For six days, between August 14 and 20, 1971, he had been the “warden” of a mock prison in the basement of Stanford University’s Jordan Hall.

In an effort to better understand what drove the interactions of prisoners and their guards — funded by a grant from the U.S. Navy and Marine Corps — Zimbardo devised a psychological experiment that saw two-dozen otherwise normal young men randomly assigned the role of either prisoner or guard for what was intended to be a two-week role-playing exercise.

Under Zimbardo’s watch, the Stanford prison experiment turned into a struggle between suffering prisoners and the manipulative, sadistic guards who enjoyed torturing them.

The results were written up and widely circulated, making Zimbardo famous throughout his profession, and revealing something very disturbing about how little it sometimes takes to turn people into monsters.

How The Stanford Prison Experiment Got Started 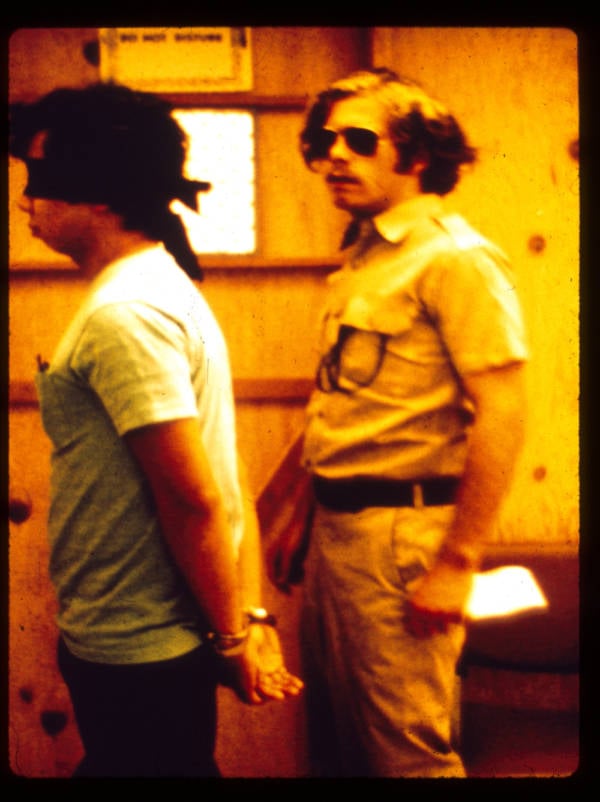 PrisonExp.orgA guard escorts a blindfolded prisoner through the prison.

A decade before the Stanford prison experiment, in 1961, Yale psychologist Stanley Milgram carried out an experiment to test the willingness of some people to deliver electric shocks to strangers. The Milgram experiment, as it came to be known, revealed that it’s upsettingly easy to talk some young men into shocking another person to death (which they were led to believe they may have done, although no subjects were actually harmed).

This experiment pointed the way forward for more research into situational behavior and the premise that we are only as good or as bad as our surroundings will let us be. Philip Zimbardo was not present for the Milgram experiment, but he had been a psychology student at Yale until 1960, and by 1971, he was ready to take Milgram’s work one step further at Stanford.

That’s when the U.S. Office of Naval Research commissioned him to study the psychology of confinement and power as it exists between guards and their inmates. Zimbardo accepted the grant and got to work on the Stanford prison experiment right away.

The site chosen for the experiment was in the basement of Jordan Hall, on the Stanford campus. There, Zimbardo set up four “prison cells” using interior partitions, as well as a “warden’s office” and various common areas for the guards to use for recreation. There was also a small broom closet, which will become relevant later on.

Zimbardo recruited subjects for his test by placing an ad in the Stanford Daily, asking for “male students” who were needed “to participate in a psychological study of prison life.” The ad promised compensation of $15 a day (equivalent to roughly $90 in 2017).

When his subjects applied for the experiment, Zimbardo carefully screened them to weed out potential bad apples. Anyone with a criminal record, however minor, was declined participation, as were applicants with histories of psychological aberrations and behavioral problems.

In the end, Zimbardo was left with 24 healthy college-age men who had no detectable tendencies toward violence or other negative behaviors. Shortly before the Stanford prison experiment began, the subjects were randomly assigned to either the prisoner group or the guard group.

The night before the experiment, Zimbardo held an orientation meeting for his 12 guards. He gave them firm instructions regarding their duties and limitations: Guards would be organized into three eight-hour shifts to provide round-the-clock supervision of the inmates.

They were given military-surplus khakis, mirrored sunglasses, and wooden batons as a symbol of authority. The guards were all told not to hit or otherwise physically abuse the prisoners, though they were told they’d have wide discretion in how they treated the 12 prisoners under their watch. 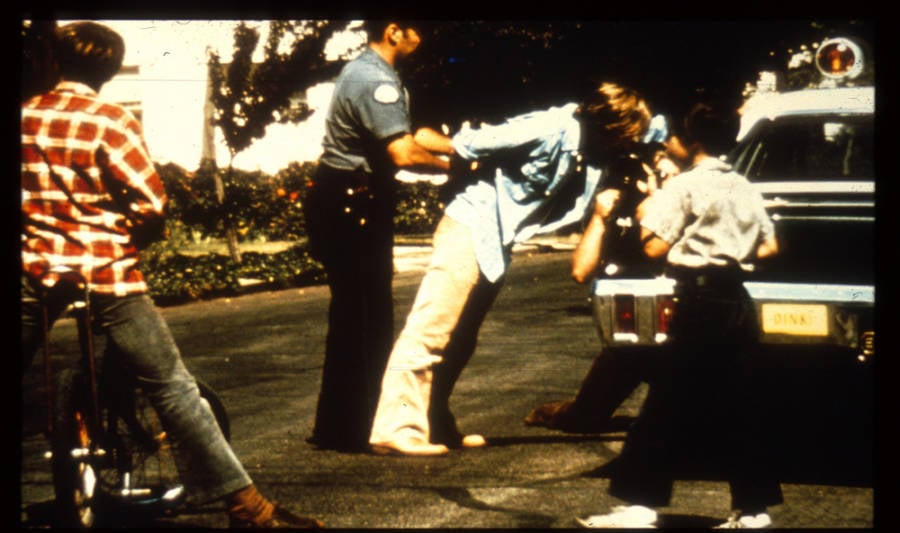 PrisonExp.orgStanford Police handcuff prisoner #8612 before transporting him to the prison.

The next day, members of the Palo Alto Police Department arrived at the designated prisoners’ homes and took them into custody. The 12 men were booked into the county jail and searched, fingerprinted, and had their mugshots taken.

At length, they were transported to the Stanford campus and escorted into the basement, where the guards were waiting for them. Prisoners were given ill-fitting smocks and told to wear large stocking caps. Each had a short length of chain looped around his ankle to drive home their status as prisoners. They were assigned three to a cell and given a lecture about the rules.

Every angle had been worked out to make the prisoners feel subordinate to the guards, including the large numbers sewn onto their smocks; guards had been told to address inmates only by these numbers, rather than allowing them the dignity of names.

By the end of the Stanford prison experiment’s first day, both sides had fully internalized the rules and begun acting toward each other as if their extreme power dynamic had existed all along.