When 23-year-old Phoenix Coldon disappeared from her Missouri home in 2011, her parents put their trust in law enforcement — but the authorities' response prompted her parents to simply search themselves.

Phoenix Coldon was last seen in the driveway of her family home in Spanish Lake, Missouri, on Dec. 18, 2011. A 23-year-old student at the University of Missouri State, Coldon sat in her mother’s black 1998 Chevy Blazer while talking into her cell phone. She drove off for a quick trip to the store, but was never seen again.

While the car was located within hours, it was found abandoned in East St. Louis and thus impounded in the state of Illinois. Coldon’s parents Goldia and Lawrence reported her missing the next day, but only heard that the car had been found two weeks later — when a family friend spotted it while driving past the impound lot. 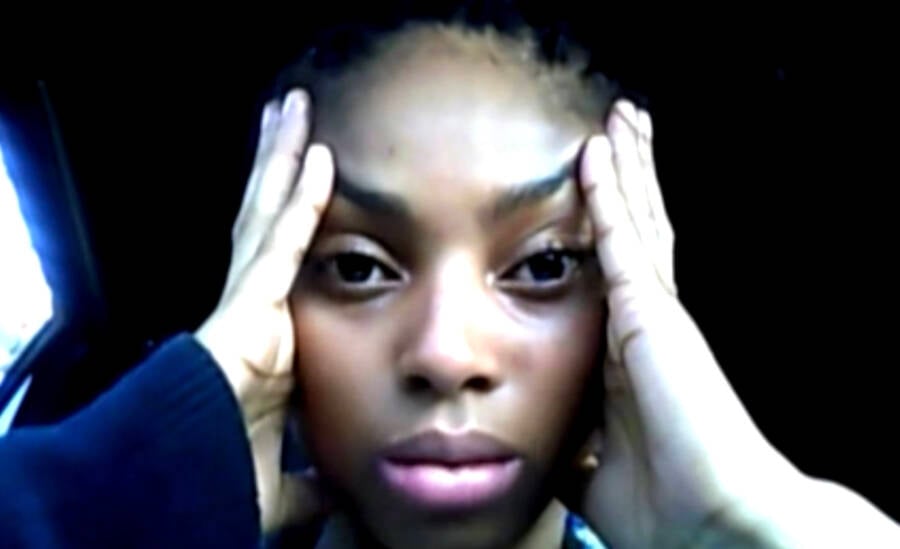 The disappearance grew stranger the more time passed. The police never made an inventory of the car and claimed there was nothing inside. This was demonstrably false as Coldon’s family retrieved it from the lot to find it littered with her belongings. Over time, evidence of her secret life started bubbling up to the surface.

Investigations uncovered Coldon’s secret boyfriend and two birth certificates. A friend allegedly saw Coldon aboard a flight from Las Vegas to St. Louis in 2014 — and leaving with two brawny men. Curiously enough, Coldon recorded a video before disappearing in which she yearned for a new life.

The Disappearance Of Phoenix Coldon

Born Phoenix Reeves on May 23, 1988, in California, Coldon’s family moved to Missouri for her father’s job when she was still a child. Her mother Gloria Reeves eventually married a man named Lawrence Coldon who adopted her. Despite being homeschooled, she became the junior fencing champion of St. Louis County. 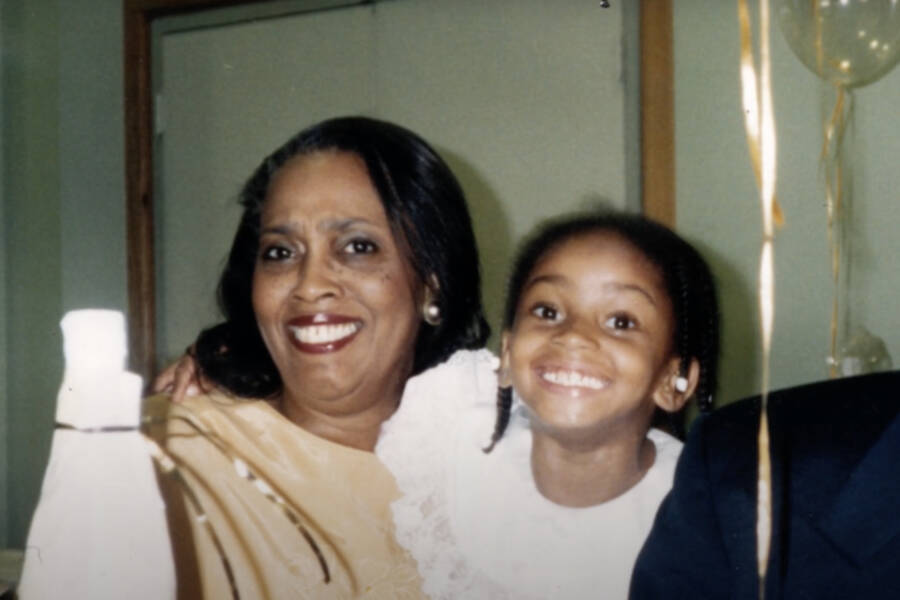 Phoenix Coldon even mastered several instruments and grew from a precocious little girl into a talented young adult. After turning 18, Coldon managed to get her parents to co-sign a lease for an apartment she moved into with a friend. That friend would later turn out to be her boyfriend. Coldon’s parents didn’t even know he existed.

Coldon was a junior at the University of Missouri-St. Louis when she disappeared. Investigative reporter Shawndrea Thomas later claimed Coldon was communicating with “multiple different men” in the months before she vanished — and even had a second cell phone that her secret boyfriend didn’t know about.

On Dec. 18, 2011, Coldon visited her parents in Spanish Lake. At 3 p.m., she grabbed her mother’s keys and got into the car only to idle for a few minutes and then drive off without telling her parents. While they presumed she went to the store or was meeting a friend on short notice, this had never happened before.

The Case Hits A Dead End

Goldia Coldon’s car was found deserted on the corner of 9th Street and St. Clair Avenue in East St. Louis, Illinois, at 5:27 p.m. While this was a mere 25-minute drive from her home, it was in another state. The car was simply impounded as “abandoned” by local police at 6:23 p.m., and its registered owner never notified. 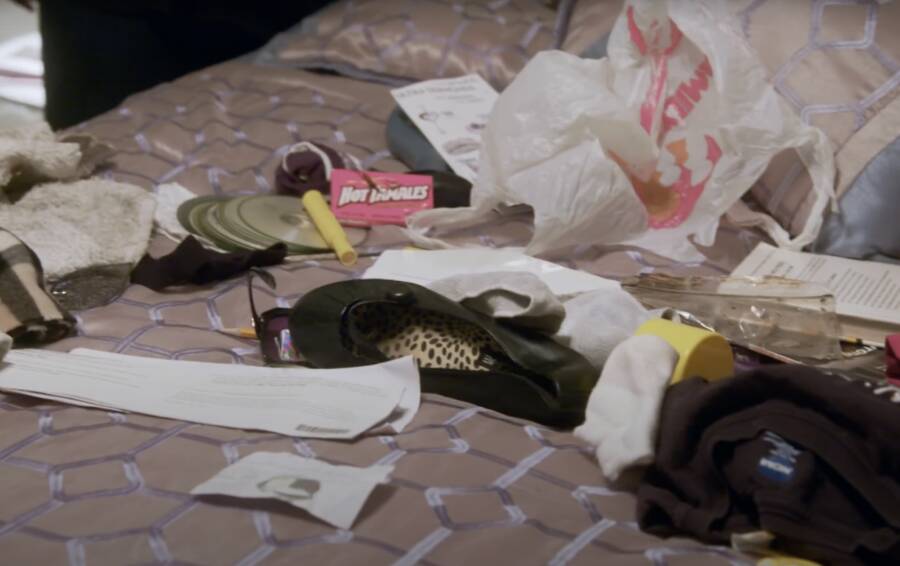 Oxygen/YouTubePhoenix Coldon’s belongings found in the car, none of which police entered into their report.

“I just wish those police had done what they were supposed to do by running those plates and seeing that the vehicle was registered to me,” said Gloria Coldon, adding that police didn’t even search the area after finding the car. “All they had to do is call and say, ‘do you know where your vehicle is?'”

Only when a family friend told the Coldons that he had seen the car at an impound lot on Jan. 1, 2012, did they find and retrieve it. To Gloria Coldon’s shock, the East St. Louis Police officer handing it over claimed that they never created an inventory sheet for the vehicle because no personal items were found inside it.

“That was not true,” said Gloria Coldon. “When we checked the vehicle at the impound there was lots of things in it, including her glasses, her purse with her driver’s license and her shoes.”

Coldon’s mother had to contact the mayor’s office in order to have the $1,000 impound bill waived. Despite East St. Louis Police Department conducting a few searches in the weeks that followed, the Coldons would not hear from them again after February 2012.

“We would’ve had a two-week start if we’d known where the car was,” said Lawrence Coldon. 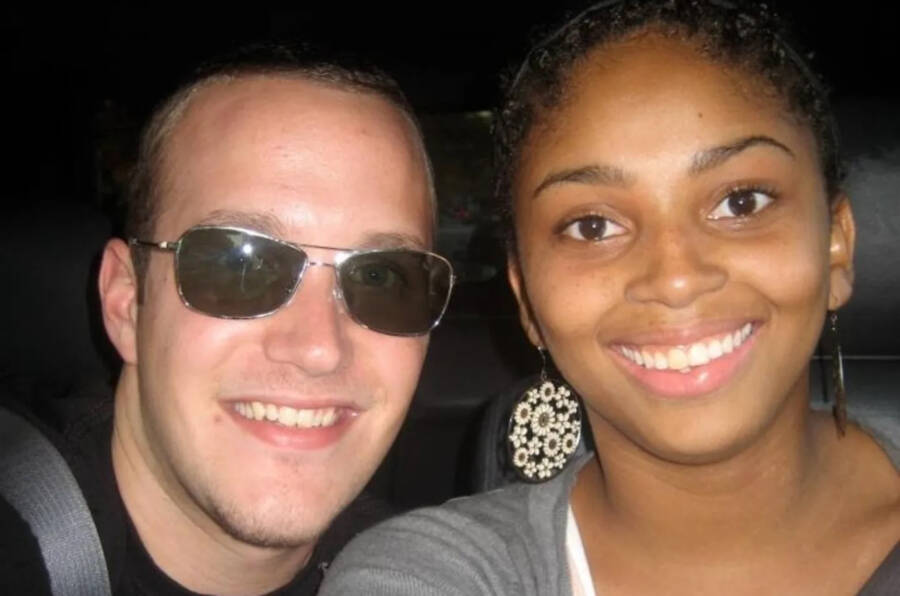 Not only did police appear to pay little attention, but there was scarce media interest in Coldon’s disappearance. Her parents believed this due to her race, leading them to contact the Black & Missing foundation to spur attention. Meanwhile, they hired private investigator Steve Foster to dig deeper.

Where Is Phoenix Coldon?

While Lawrence Coldon combed the abandoned buildings of East St. Louis for signs of life, his wife spent years interviewing local prostitutes and drug dealers in hopes of finding a lead. Foster, meanwhile, learned Coldon had two birth certificates — one in her mother’s maiden name and one in her adoptive name.

In the video Coldon had recorded before disappearing, meanwhile, she spoke of wanting “to start over” but that she can’t “start the new me over.” She also recited the Serenity prayer and asked God to help her “accept the things that won’t change,” before stating: “I cant remember a time when I was happy.”

Some believe Coldon ran away, which her strict household and video message may suggest. Coldon hadn’t enrolled in classes for the spring semester of 2012, after all. While investigators found a Phoenix Reeves living in Anchorage, Alaska, it wasn’t Coldon. As for her secret boyfriend, he was cleared of any wrongdoing 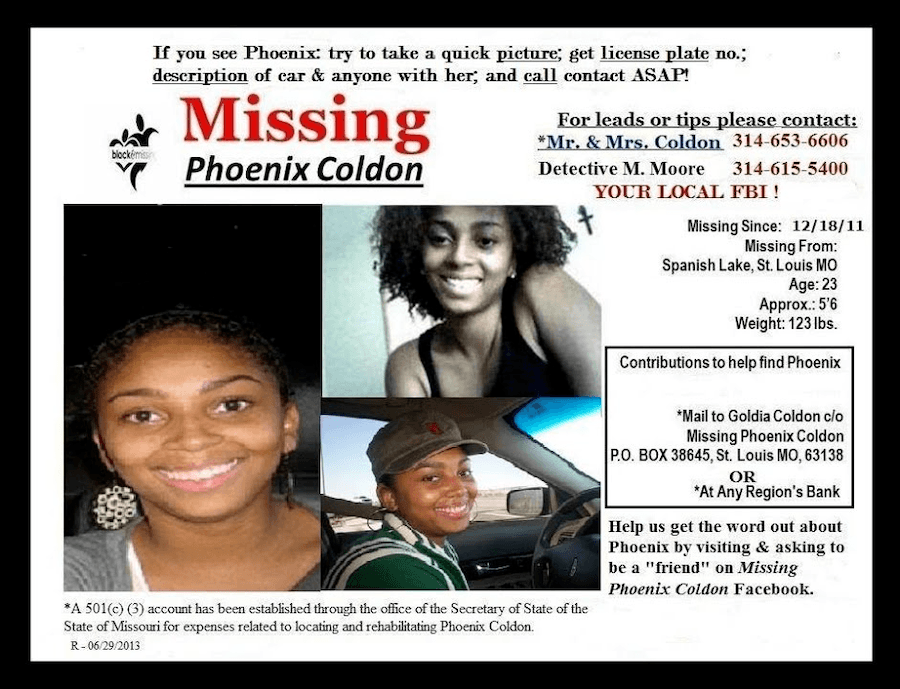 In 2014, Coldon’s friend Kelly Fronhert said she saw Coldon boarding her flight and that the woman reacted when Fronhert said Phoenix’s name. The woman was traveling with several young women and two men who “looked like they could be pro football players” — and didn’t engage with Fronhert as a result.

Tragically, Gloria and Lawrence Coldon spent all of their savings and family home on a promising lead that turned to ash. When a Texas man claimed to know where Coldon was, the family spent everything they had on another round of private investigators to follow up the tip — only for the man to admit he made it all up.

Ultimately, investigators believe the three most likely conclusions to his mystery are that Phoenix Coldon was either abducted by sex traffickers, ran away on purpose, or died in some unknown act of foul play. Perhaps most chilling, the ex-girlfriend of one of Coldon’s secret boyfriends once asked him if he knew where she was.

He replied, “Why are you worrying about someone who’s dead?”

After learning about Phoenix Coldon, read about the disappearance of 17-year-old Brittanee Drexel. Then, learn about nine-year-old Asha Degree’s disappearance from North Carolina.