Not all superheroes wear capes. Some just wear a “supersuit” and a mask. Take Phoenix Jones, for instance, a real-life superhero.

During the day, he goes by Benjamin Fodor. But at night when there are villains on the prowl, he transforms into Phoenix Jones, masked vigilante, and crime-stopper.

Phoenix Jones was born in 1988. He lives in Seattle, Wash., where he has taken to patrolling the city. It started when Jones’s car got broken into and his son was injured by the broken glass, costing him a trip to the emergency room. Jones found out afterward that multiple people had witnessed the car break-in and did nothing about it.

“Teenagers are running down the street, breaking into cars, and no one does anything? Where’s the personal accountability?” Jones said.

There was a second incident during which a friend was assaulted outside a bar and left with permanent facial damage.

“And I thought, why didn’t someone help him? There were seventy people outside that bar and no one did anything,” said Jones.

After witnessing several episodes of criminal activity in the Seattle area with few repercussions, Jones decided to take matters into his own hand.

It started with just the mask but evolved into the full-blown Phoenix Jones superhero outfit. Jones has said that the outfit helps bring attention to a serious issue. However, it’s not just for show. The suit he wears is bulletproof and has armor plating which helps him feel safe when he goes out to fight crime.

He also carries a taser nightstick and a grappling hook but doesn’t carry a knife or gun. Jones is also a professional MMA fighter. Which probably doesn’t hurt when it comes to catching criminals. 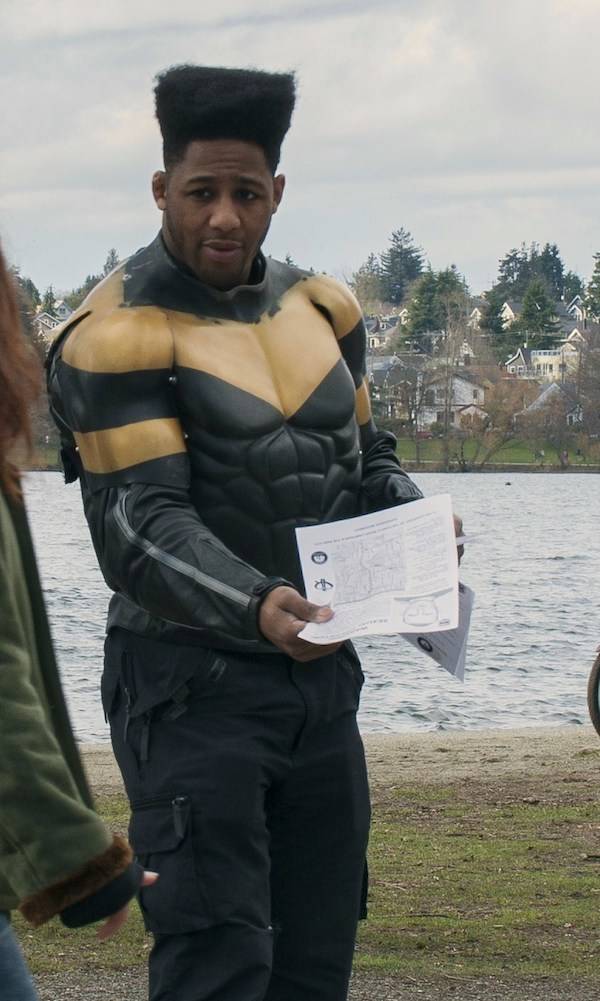 Phoenix Jones passing out flyers with a description of a serial predator. 2013.

Since 2011, he has intervened in many local crimes. From defending potential fight victims to pepper-spraying a thief attempting to steal a bus to preventing a man from being stabbed.

In 2015, Phoenix Jones had a heated exchange with a man who was about to drive while intoxicated.

“Just back up! Stay back, stay away. I don’t want to have to Tase you,” Jones yelled.

Red Dragon and Buster Joe, who were acting as his sidekicks, called the police while Jones kept the man from getting in the car.

The reaction of local authorities has been mixed when it comes to Phoenix Jones.

In September of 2015, the Seattle police credited him in assisting with the arrest of an armed man under investigation for assault.

But Detective Mark Jamieson has his reservations, as he told reporters, “Our concern is if it goes badly, then we end up getting called anyway, and we may have additional victims.”

Still, many can’t help rooting for this real-life superhero. And Phoenix Jones has made it clear that his true mission is just to help people. He cares about his community and before the Rain City Superhero Movement disbanded in 2014, they would end nights by distributing food from Taco Bell to homeless people on the sidewalks.

You know what they say. All in a day’s work.

If you found this article about Phoenix Jones interesting, you may also want to read about progressive Marvel comics that pushed boundaries. After that take a look at snapshots of life in the real Wild West.