The cave is believed to have been in use by the Chumash people between 1600 and 1800, and evidently served as a space in which they could trip on the flower Datura wrightii. 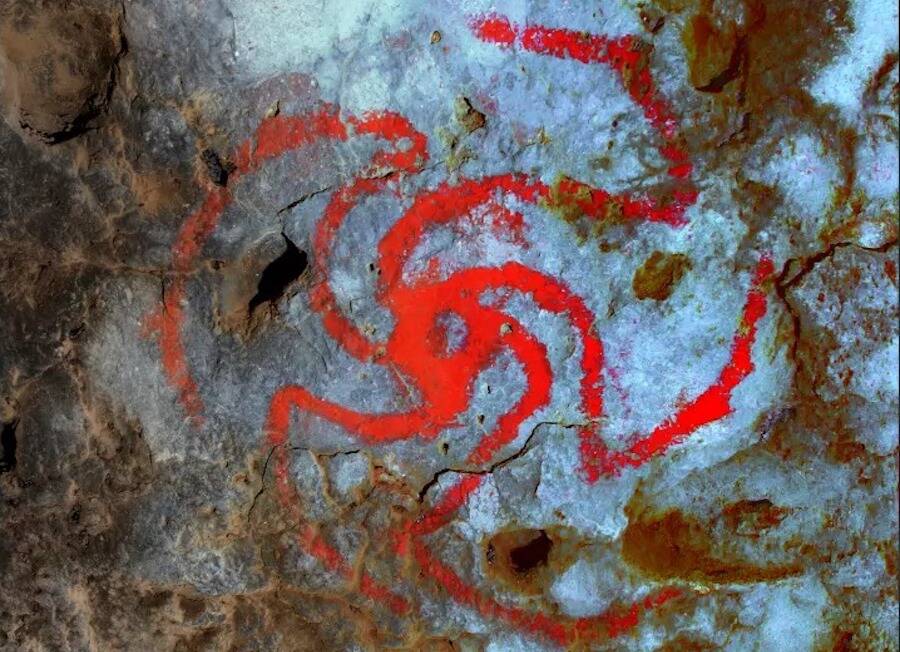 Devlin GandyThe cave art resembles an unfurling Datura wrightii, a flower that contains both scopolamine and atropine which are two very psychoactive compounds.

A new study has found that Indigenous cave art near Santa Barbara, California likely depicts a hallucinogenic “trance flower” known as Datura wrightii. Beside the drawing, researchers also found 400-year-old chewed globs that they now believe to be the flower itself.

According to LiveScience, researchers believe that these Indigenous Californians, known as the Chumash people, would gather within the cave after ingesting Datura and look up at the ceiling where they had drawn a red pinwheel beside a depiction of a hawkmoth, an insect that pollinates Datura.

Scientists now believe that the pinwheel is actually a representation of Datura as it is unfurling. 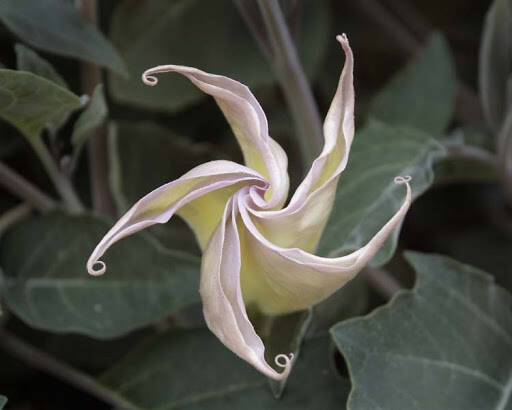 Lost in the GardenDatura wrightii beginning to unfurl.

The Chumash people have frequented the cave as early as 1600 and as late as the 1800s, and they were known to use the plant for both medical and ceremonial purposes.

Historians think that the plant was used to “gain supernatural power for doctoring, to counteract negative supernatural events, to ward off ghosts, and to see the future or find lost objects.” It’s also been documented that the Chumash would brew tea with the plant for ritualistic coming-of-age ceremonies for young boys.

Most recently, scientists tested a collection of globs known as “quids” that were found beside the pinwheel and learned that — with the exception of a glob that turned out to be yuca — they are actually chewed pieces of the flower itself.

“[The quids] consistently had indentations that we would expect from molars, so it appears that they had inserted it into their mouth and chewed,” said David Robinson, a lead researcher in archaeology at the University of Central Lancashire in England.

“Each quid appears, therefore, to have been a single ‘dose,’ inserted into the mouth and chewed/sucked in order to extract the hallucinogenic.”

Scientists found scopolamine and atropine in the quids, two of the mind-altering substances found in Datura.

According to the paper, this find marks “the first clear evidence for the ingestions of hallucinogens at a rock art site, in this case, from Pinwheel Cave, California.” 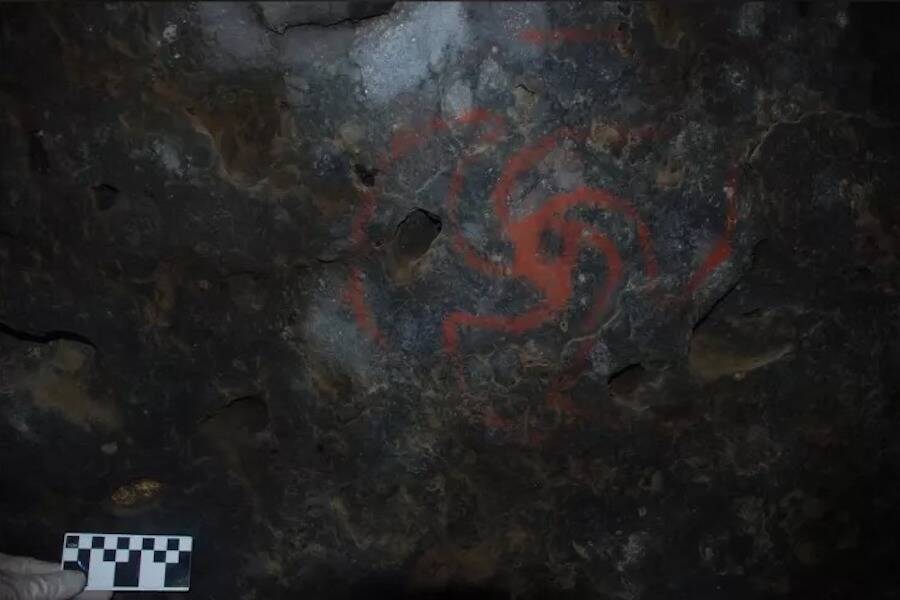 David RobinsonThe red pinwheel painted on the ceiling of Pinwheel Cave, with a glob stuck in a crevice in the lower left.

Robinson is also confident that the cave artists were likely sober when they drew the hawk moth. Doing so under the influence of scopolamine — which is still used today to combat motion sickness — would’ve been a challenge.

“It’s extremely unlikely because of the debilitating effects of Datura,” he explained. “I’ve never tried painting under the influence, but personally I think it would be difficult.”

He believes that the ceiling illustrations were essentially made to set the scene, just as religious artworks are found scattered about modern-day churches. Staring at the pinwheel drawing likely enabled participants to focus on a singular area as the drugs took hold — in a shared experience that grew into a tradition.

According to Science Mag, the Chumash people called these experiences “sacred dreams.” 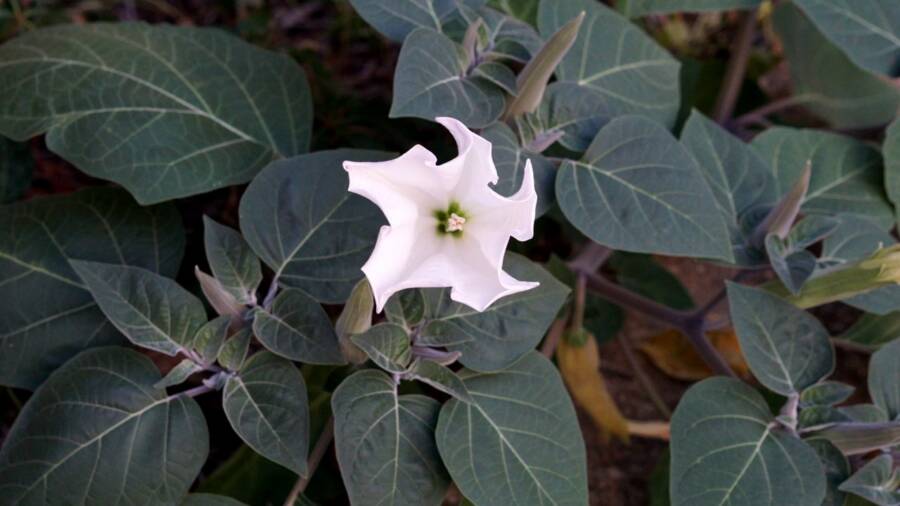 YouTubeA Datura wrightii flower unfurls only at dusk and dawn and is pollinated by the hawkmoth.

The rock painting is located 90 miles northeast of Santa Barbara and was first discovered by workers of the Wild Wolves Preserve in 1999. The four-by-seven-inch illustration doesn’t look like a Datura to casual onlookers, but professional botanists would disagree.

They claim that the resemblance is stark when compared with an actual unfurling Datura viewed from above. This unfurling occurs only at dusk and dawn during pollination, perhaps an important time for the Chumash.

A VICE documentary on the more nefarious, modern-day use of drugs like scopolamine.

Psychedelic trips aren’t all that the Pinwheel Cave was used for, however. Archaeologists also uncovered an arrow shaft straightener and projectile points, which suggests that this site was also used to prepare for hunts.

Additionally, researchers found animal remains and seeds which indicate that the Chumash also prepared their food here and likely also used it as a storage space. “This is a community site,” concluded Robinson of the cave.

Robinson also believes that the pinwheel was created in order to honor the sacred plant.

“The painting… is them representing the plant that causes the hallucinogenic experience — not the vision that is caused by the plant. They’re venerating the plant, saying, ‘That’s cool!'”

After learning about the chewed remains of a psychedelic plant found stuck to the ceiling of an Indigenous cave in California, read about the earliest evidence of Ayahuasca found in an ancient shamanic pouch. Then, learn about the sound engineer who accidentally dosed himself with LSD while cleaning 1960s radio equipment.