If you weren’t active on social media during the 2016 US presidential election, you can be forgiven for asking “what is Pizzagate?” While the conspiracy theory made headlines in 2016 after it led to a shooting in a Washington, D.C. pizzeria, it is still one of the more opaque moments of what turned out to be a pretty wild year in the news. But where did the wild conspiracy come from? Was pizzagate real?

The easy answer is no, Pizzagate was not real, but describing how the theory took root and spread online is a more complicated question.

The Conspiracy’s Wide Web Of “Facts”

According to the Pizzagate conspiracy, the Comet Ping Pong pizzeria in Washington, D.C. housed a major international child trafficking operation in its basement. Conspiracy theorists claimed the pizzeria’s menu used “a pedophilic symbol, as do the signs and decorations of other neighboring businesses.” Underground tunnels linked the businesses, and insignia reading “play, eat, drink” – code for PED – welcomed pedophiles. 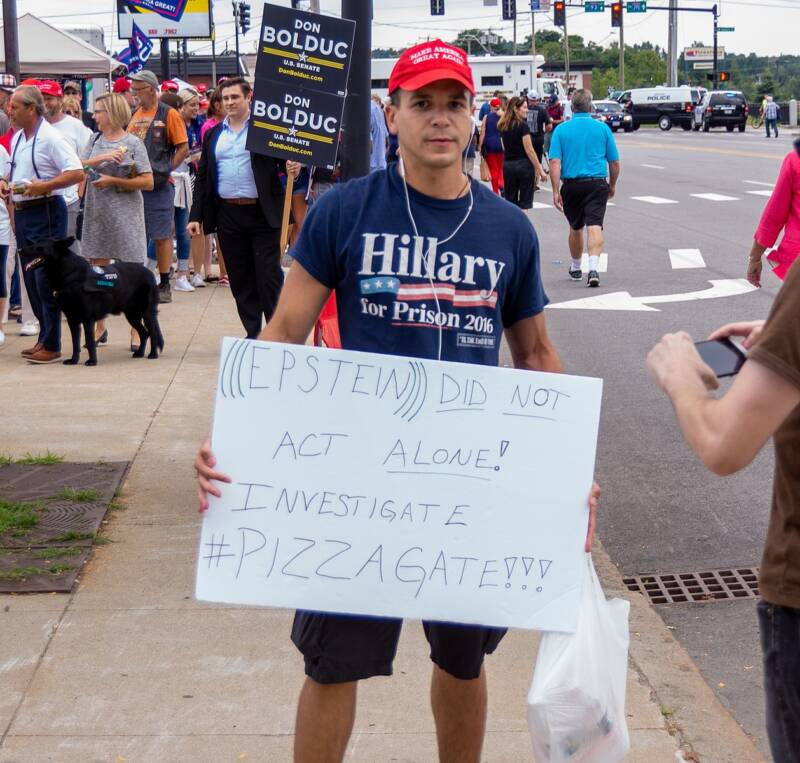 As the conspiracy spread, the web of “facts” grew. The pizza parlor’s underground refrigeration room was actually a kill room. Satanic cults met in the parlor to practice cannibalism. Conspiracists even promoted an outrageous theory that Podesta and his brother kidnapped missing three-year-old Madeleine McCann in 2007.

But how did the outrageous conspiracy begin?

Pizzagate Was The October Surprise No One Saw Coming

In the final days of the 2016 election, a new conspiracy theory was born.

The next day, a Facebook user who claimed inside NYPD knowledge posted, “Its much more vile and serious than classified material on Weiner’s device. The email DETAIL the trips made by Weiner, Bill and Hillary on their pedophile billionaire friend’s plane, the Lolita Express. Yup, Hillary has a well documented predilection for underage girls. . . . We’re talking an international child enslavement and sex ring.” 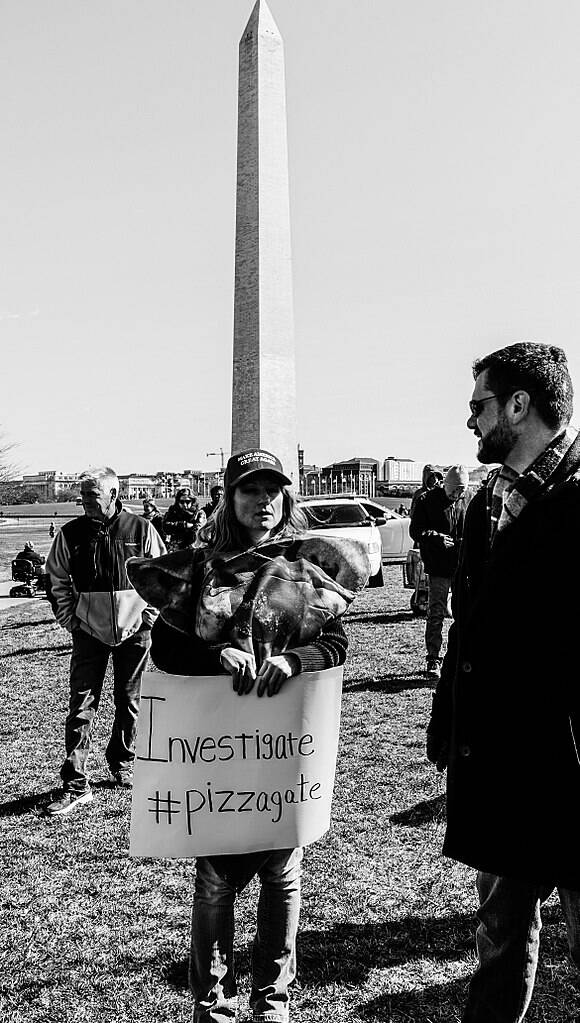 That wasn’t the first time conspiracy theorists linked Hillary Clinton with sex trafficking. In July 2016, a poster on 4chan using the name FBIAnon claimed, “Bill and Hillary love foreign donors so much. They get paid in children as well as money.”

Another poster asked “Does Hillary have sex with kidnapped girls?”

InfoWars Gets Hold Of The Pizzagate Conspiracy

Four days after the Facebook post, the story was broadcast on Alex Jones’ InfoWars. It was Nov. 2, 2016, less than a week before the election and Jones — the conspiracy theorist who reached millions through his internet broadcast and website — put Pizzagate under the spotlight.

On Jones’ show, fellow conspiracy theorist Douglas Hagmann said, “[T]he most disgusting aspect of this is the sexual angle. I don’t want to be graphic or gross here. . . . Based on my source, Hillary did in fact participate on some of the junkets on the Lolita Express.”

InfoWars helped catapult the theory from an obscure rumor to front-page news. In a matter of days, searches for “Hillary” and “pedophile” went from a zero on Google Trends to 100 – the highest mark on the scale of trending searches. 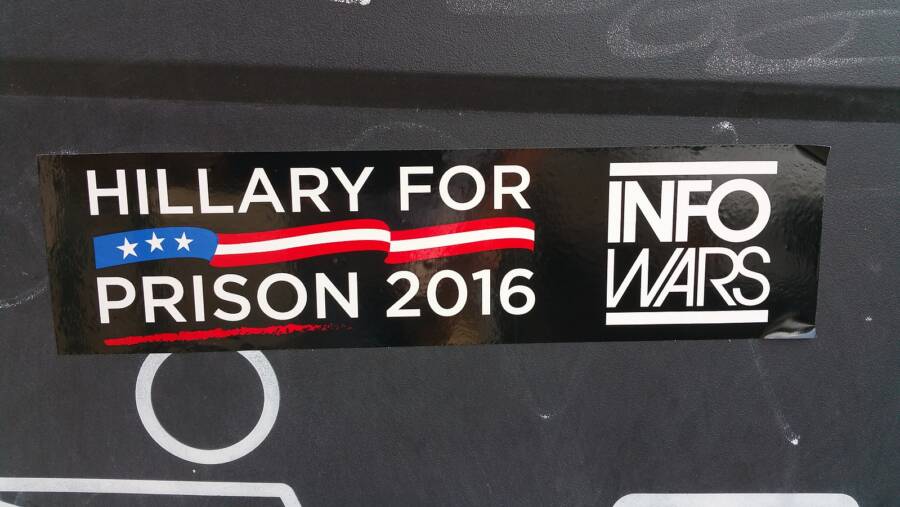 Eli Christman/FlickrInfoWars helped promote the Pizzagate conspiracy in 2016 as part of its campaign against Hillary Clinton.

Soon other right-wing conspiracy outlets jumped on the story. Erik Prince, a major donor to the Trump campaign and the brother of Education Secretary Betsy DeVos, told Breitbart Radio that the NYPD had evidence that “Hillary went to this sex island with convicted pedophile Jeffrey Epstein. Bill Clinton went there more than 20 times. Hillary Clinton went there at least six times.”

How Did Comet Ping Pong Get Dragged In?

In Oct. 2016, Wikileaks released stolen emails from John Podesta, inviting the public to pour over the private messages for dirt. Conspiracy theorists found Podesta’s repeat emails about pizza suspicious. Some decided “pizza” was a code.

After Pizzagate went viral, more than 250,000 Twitter accounts posted 1.4 million tweets about the conspiracy theory in five weeks. While some accounts were bots, others were run by ordinary people.

A grandmother in Pennsylvania explained her motivations this way: “Didn’t want Hillary to win at any cost, but liked Trump from day one. I don’t really know that much about the Pizzagate thing. Everything I tweeted or retweeted was stuff that I found through my own research or from another follower.”

Even after the election, Pizzagate believers targeted Comet Ping Pong, posting stolen information about employees and claiming a link between the pizzeria and pedophilia.

On Nov. 27, 2016, Alex Jones devoted a full 30 minutes to unraveling Pizzagate. “Something’s being covered up,” Jones declared. “All I know is, God help us, we’re in the hands of pure evil.”

As death threats began flooding into Alefantis’s restaurant, the FBI and police did nothing. “It turns out you can say anything about anyone online,” Alefantis told Rolling Stone. “It’s your First Amendment right to terrorize.”

Just weeks after the 2016 election, one man walked into Comet PingPong armed with a rifle and opened fire.

Edgar Maddison Welch wasn’t planning to storm the pizza restaurant alone. He’d tried to convince friends to come on the “raid” with him, arguing that they should be willing to “sacrifice the lives of a few for the lives of many.”

One of Welch’s friends texted back, “Sounds like we [are] freeing some oppressed pizza from the hands of an evil pizza joint.”

But it wasn’t a joke to Welch.

Edgar Maddison Welch being apprehended after Pizzagate inspired him to storm Comet Ping Pong with an assault rifle on Dec. 4, 2016.

On Dec. 4, 2016, Welch entered the restaurant carrying a military-style semiautomatic rifle, a handgun, and a folding knife. Ignoring the customers, Welch stormed the kitchen and shot open a lock to find cooking supplies. He checked all the doors and only found a stack of fresh pizza dough.

Welch was willing to die because of a completely false conspiracy theory. Within days, Welch himself admitted that Pizzagate was false.

What’s fact and what’s fiction in the Pizzagate conspiracy? The claims made by conspiracy theorists were “ridiculously thin,” according to Politifact. Snopes declared the conspiracy demonstrably false. DC police said there is no evidence of a pedophile ring at Comet Ping Pong.

The mysterious basement that connected the pizzeria to other businesses through underground tunnels simply does not exist. The photograph of an underground refrigerated room that was described as the pizzeria’s “kill room” was taken at another location.

As for the Madeleine McCann claim, there is zero evidence linking the Podestas to Portugal, where McCann was abducted in 2007. Portuguese police were looking for a single male suspect between the ages of 20 and 40. John Podesta was nearly 60 at the time, and his brother is six years older. 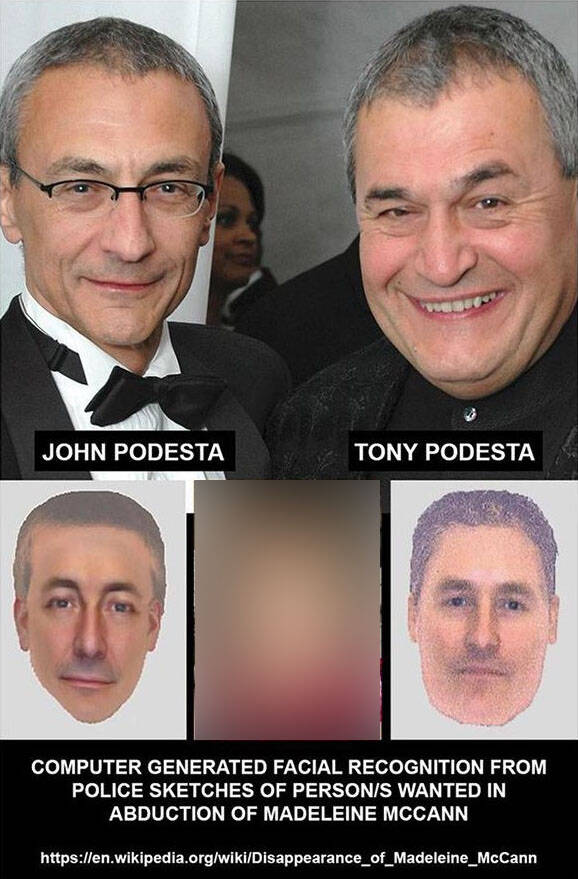 New York Times/Wikimedia CommonsPizzagate conspiracists tried to link John Podesta and his brother to the theory with a police sketch of a single male suspect age 20-40.

The “Satanic and pedophilic” insignia at Comet Ping Pong and other businesses were stars, hearts, triangles, and spirals – symbols used in hundreds of logos.

As for Hillary Clinton, the ultimate target of the Pizzagate conspiracy, absolutely zero evidence directly links her to the sex trafficking and murder of children.

Why Do People Fall For Conspiracy Theories Like Pizzagate?

After an armed man stormed Comet Ping Pong to “free” child sex slaves, owner Alefantis pleaded with people to stop spreading the false conspiracy theory. “I really hope that all of these people fanning the flames of this conspiracy would take a moment to contemplate what has gone on here today and maybe to stop.” 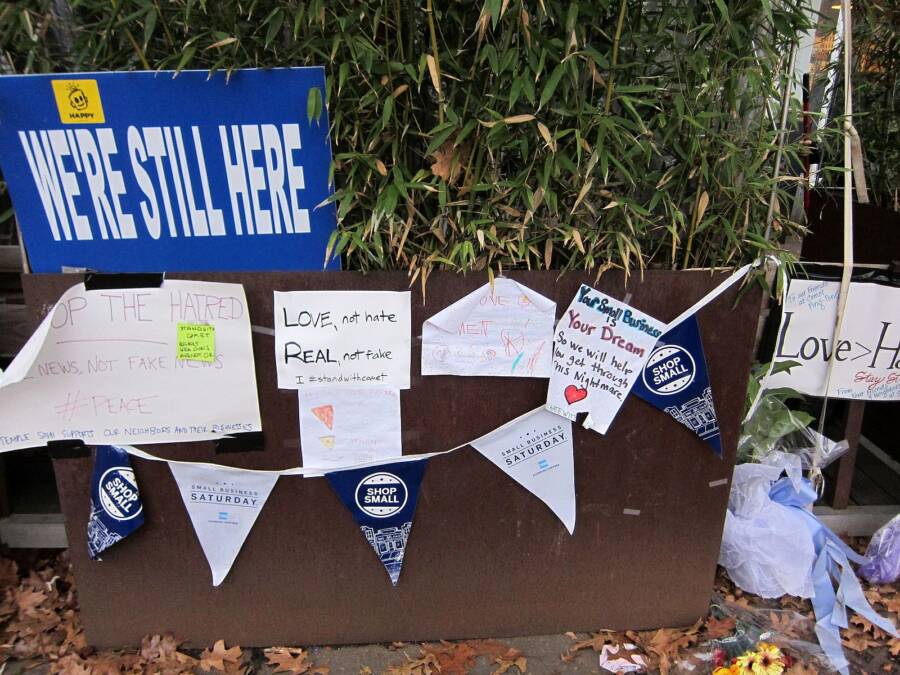 Wikimedia CommonsMessages outside Comet Ping Pong show support for the restaurant in the face of the conspiracy theory.

Yet attempts to counter false stories with the truth often fail. As Bryce Reh, the general manager at Comet Ping Pong described fighting against viral conspiracy theories feels like “trying to shoot a swarm of bees with one gun.”

Since 2016, the right-wing effort to discredit mainstream news sources has only added fuel to the fire. Far-right media outlets, which amplify theories posted on 4chan and Reddit, fan the flames even in the face of contrary evidence, like the lack of a basement at Comet Ping Pong.

As Harvard Law professor Yochai Benkler puts it, “The right-wing-media ecosystem had become so hyperpartisan, so self-referential, and so superinsular it often simply ignored information that’s disconfirming.”

An HBO special called After Truth: Disinformation and the Cost of Fake News will explore the Pizzagate conspiracy. In response to the Jan. 2020 announcement of the special, produced by CNN reporter Brian Stelter, conservative outlets like Fox News lambasted CNN for spreading fake news. Dan Gainor of the conservative Media Research Center quipped, “it’s hard to tell if this is a documentary or an autobiography.”

The Surprising Roots Of Pizzagate’s Claims

By taking a kernel of truth – Jeffrey Epstein’s sex abuse and trafficking – and spreading the guilt to unrelated people like Hillary Clinton, John Podesta, and Comet Ping Pong, the conspiracy theory went viral.

In Cohn’s words, these potent conspiracy theories, which have resurfaced for nearly 2,000 years, represent “a fantasy and its consequences.” And in a world where Alex Jones called Hillary Clinton a “damn demon” who attends a “witches’ church,” the fantasies that fueled the witch trials don’t seem so far in the past.

Next, read about the most popular conspiracy theories in human history and then check out ten completely untrue and harmful false flag conspiracies.

Genevieve Carlton
Genevieve Carlton earned a Ph.D in history from Northwestern University with a focus on early modern Europe and the history of science and medicine before becoming a history professor at the University of Louisville. In addition to scholarly publications with top presses, she has written for Atlas Obscura and Ranker.
You might also like
×
Follow ati On
Join The All That's Interesting Weekly Dispatch
Like Follow