The Story Of Taboo-Breaking Badass Annette Kellerman, ‘The Perfect Woman’

When Annette Kellerman was born in 1886, women had to wear heavy wool garments to the beach or cover their legs completely with stockings. But Kellerman, who would later become a world-record swimmer, couldn’t win races in swimwear she compared to “lead chains.”

Instead, Kellerman pioneered a form-fitting, sleek swimsuit that gave her an edge in competitions – even against male swimmers. But Kellerman didn’t just break boundaries in the water, she also did in Hollywood, on the silver screen, and in society at large.

Kellerman didn’t enter the world as the resilient athlete-extraordinaire she became. Kellerman was born with legs so weak that she had to wear heavy steel braces to strengthen them.

Her parents, both musicians living in Sydney, Australia, encouraged her to strengthen her legs by swimming, too. Within a decade, Kellerman became an award-winning swimmer.

“Only a cripple can understand the intense joy I experienced,” Kellerman recalled of the joy she felt while swimming. “After I learned, I’d go swimming anywhere, anytime.” 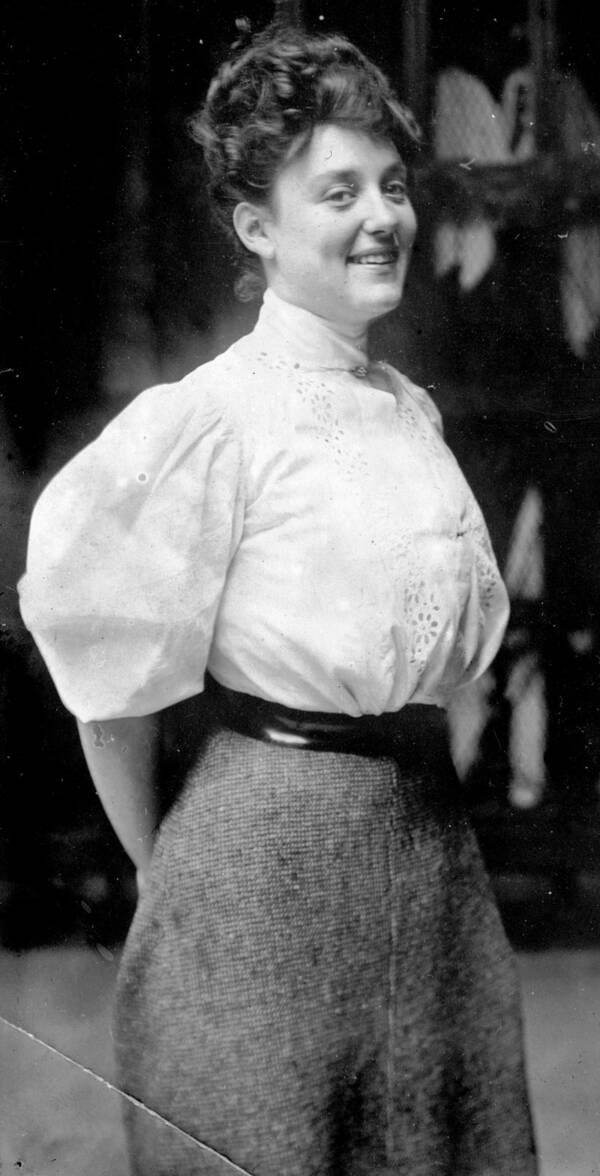 Bain News Service/Library of CongressKellerman as a young woman on a visit to the United States.

As a teenager, Kellerman set a record for the ladies’ mile at New South Wales in 1902, swimming the distance in under 34 minutes.

By 1905, Kellerman held multiple world records for women’s swimming and set out to break new barriers. She beat several men in a race down the Seine River and attempted to swim the English Channel.

But after over ten hours in the channel on her third attempt, Kellerman admitted, “I had the endurance but not the brute strength.” 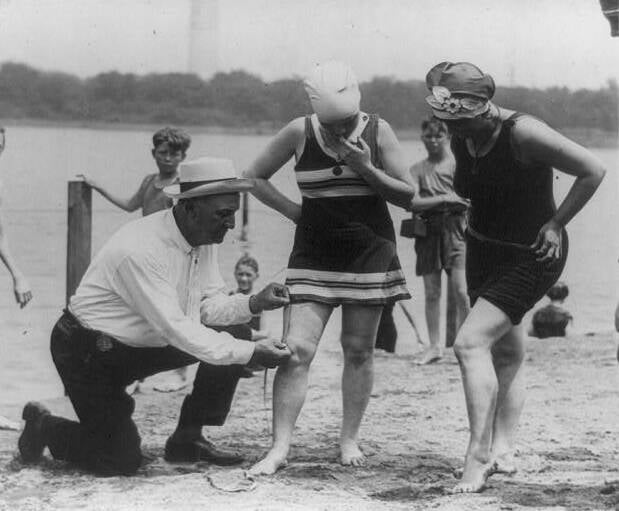 On a 1907 visit to train for a 13-mile race on Revere Beach in Boston, Kellerman recalled how “in Boston, I was amazed seeing the bathing suits worn by American women.”

Kellerman stood out among the American women in corsets, wool dresses with puffed sleeves, bloomers, and other bulky swimwear. “What difference is there wearing 12 yards of linen in the water than lead chains?” She later challenged.

Kellerman’s bathing suit left her arms and legs exposed. Though it contained shorts, they ended well above her knees. A fellow beachgoer called the police on Kellerman and she was promptly arrested for indecency.

Kellerman’s arrest – and her scandalous swimsuit – made headlines. “Me, arrested!” Kellerman reportedly told the Boston Sunday Globe in 1953. “We were all terribly shocked.”

In another interview, Kellerman explained, “My arrest in Boston, which hit the headlines in America, was really a mistake.” In the end, a judge ruled that Kellerman could wear her suit – if she covered up with a full-length cape until she reached the water’s edge. 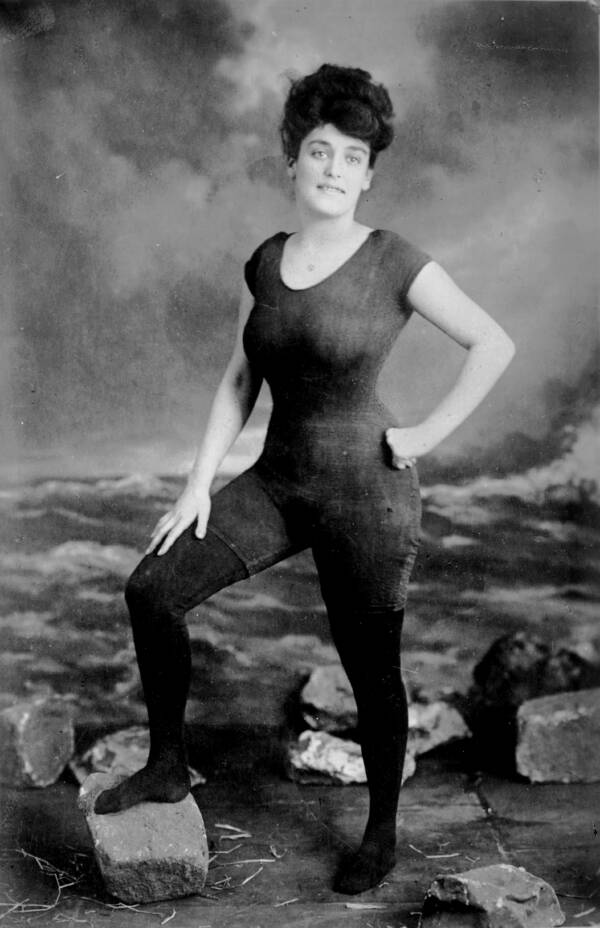 Bain News Service/Library of CongressKellerman in the skintight swimsuit that caused controversy.

Kellerman went on to sell her sleek suits in the States as “the Annette Kellerman Sun-Kist swimsuit.” In her 1918 book, Kellerman argued that: “Water is 700 times as heavy as air, and to attempt to drag loose-flowing cloth garments of any sort through water is like having the Biblical millstone around one’s neck.”

Harvard Declares Her ‘The Perfect Woman’ And Hollywood Welcomes Her

Annette Kellerman’s fame skyrocketed after her arrest. In 1908, a Harvard professor named Dudley Sargent reached out to Kellerman to assist him in a study that’s pretty unsavory by today’s standards.

Sargent took the measurements of thousands of women and compared them to the Venus de Milo in search of “the Perfect Woman.” Annette Kellerman came closest to these classical proportions, and she quipped in response: “But only from the neck down.”

A savvy businesswoman, Kellerman put the title to use in her career. The copy in a 1912 advertisement for shoes read, “The Perfect Woman, Annette Kellerman, wears and recommends the perfect shoe – the La France.”

The title also helped Kellerman to launch a vaudeville career. She titled one show “the Perfectly Formed Woman” and traveled the world as a vaudeville headliner in aquatic dancing. Known as the “Australian Mermaid,” Kellerman’s act helped to popularize synchronized swimming. 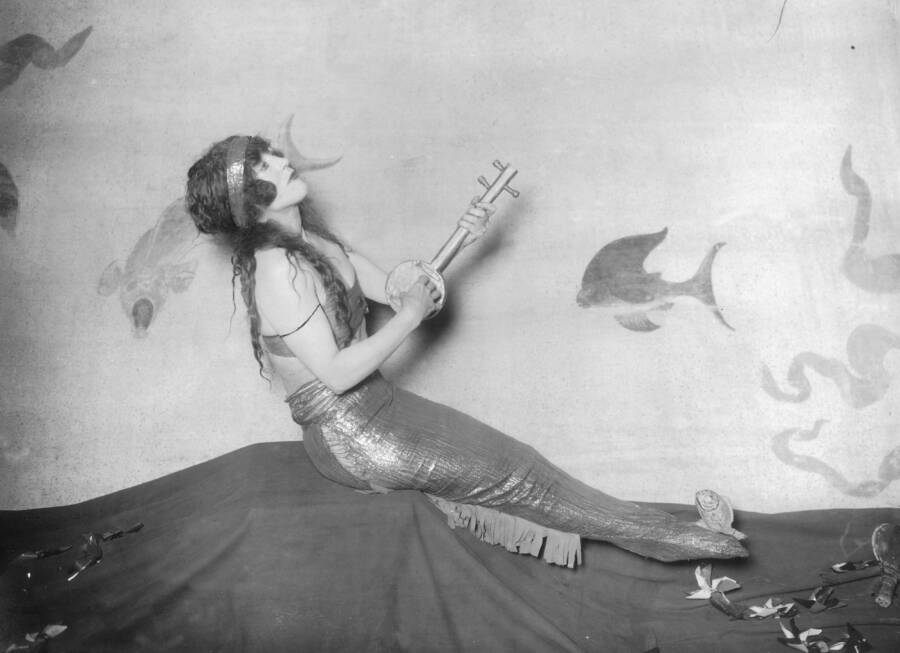 Hulton Archive/Getty ImagesKellerman played mermaids in several films and in addition to “the Perfect Woman” and “the Australian Mermaid,” was nicknamed “the Diving Venus.”

She transitioned from vaudeville to film and starred in silent movies like 1914’s Neptune’s Daughter and two years later, A Daughter of the Gods. In Neptune’s Daughter, Kellerman performed dangerous stunts, including a cliff dive that left her unconscious.

Later, when an underwater tank burst, Kellerman was injured — but this didn’t stop her. She successfully performed a 60-foot dive into a crocodile-infested pool and leapt over 90 feet into the sea.

When studio executives cut a waterfall dive from A Daughter of the Gods, Kellerman complained: “That’s the way. Somebody’s always trying to take the joy out of life.” 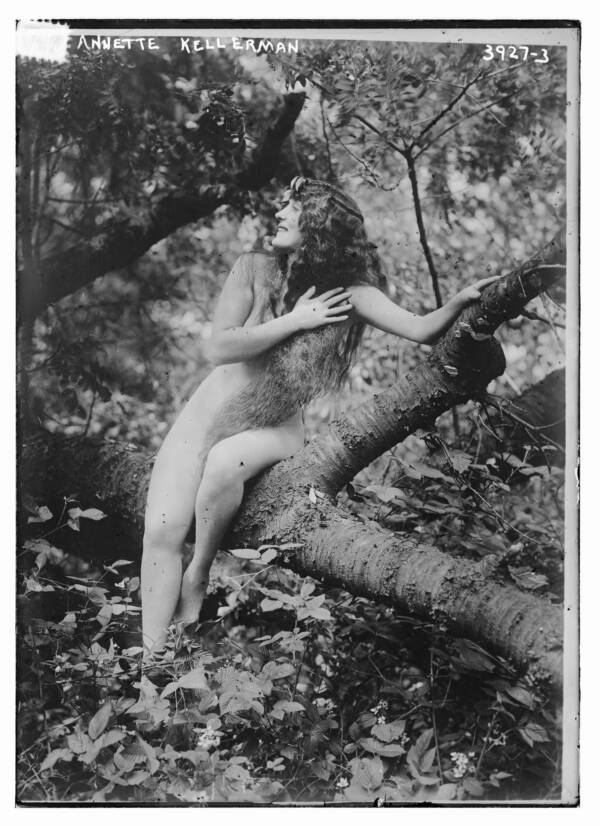 Bain News Service/Library of CongressAnnette Kellerman in her notorious birthday suit for the 1916 film Daughter of the Gods.

Kellerman’s fearlessness inspired one male journalist to write, “After seeing her, one may feel like defying any ten-foot man in the audience to declare that the sex of which she is an ideal example hasn’t the courage to fight or the ability to vote or do anything else they choose to do.”

After making her name as a swimmer, movie star, and author, Kellerman retired from the spotlight and ran a health food store in Long Beach, California. She became something of a health-and-fitness-guru, having been a vegetarian her whole life. Her fame continued even when a new swimmer-turned-star came on to the scene. That star, named Ester Williams, took on the role of Annette Kellerman in the film Million Dollar Mermaid in 1952.

And when a daring new suit debuted in the 1940s, the Globe ran to Kellerman for comment. Despite her taboo-breaking lifestyle, even Annette Kellerman would come to blush at the idea of the bikini.

“The Bikini bathing suit is a mistake,” Kellerman declared. “Only two women in a million can wear it. And it’s a very big mistake to try.” 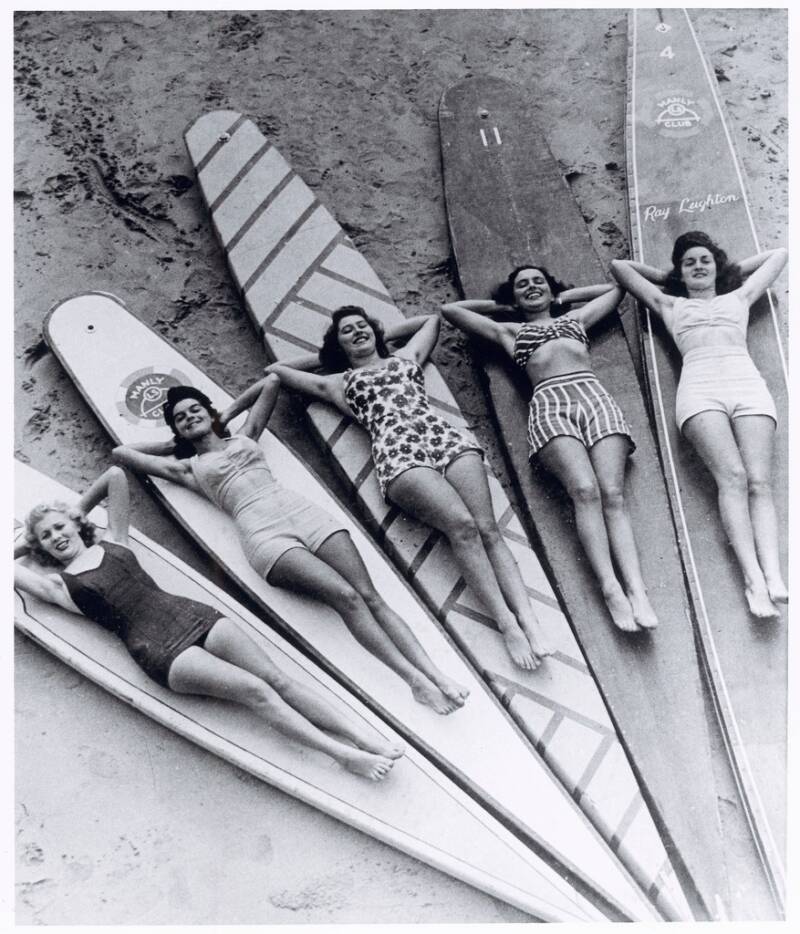 Ray Leighton/National Library of AustraliaSwim fashion changed quickly after Kellerman’s arrest, as this circa 1938 photograph from New South Wales shows.

As for why Kellerman defended the one-piece swimsuit, she star said: “The bikini shows too much. It shows a line that makes the leg look ugly, even with the best of figures. A body is at its most beautiful when there is one beautiful, unbroken line.”

In 1970, Kellerman moved back to Australia with her husband, where she continued to swim until her death at the age of 89.

Learn more about the history of women’s swimwear and the beach policemen who measured hemlines to enforce decency laws.