The lioness nursed the baby leopard and fed it meat from her hunt, while also shielding it from other lions in the area. 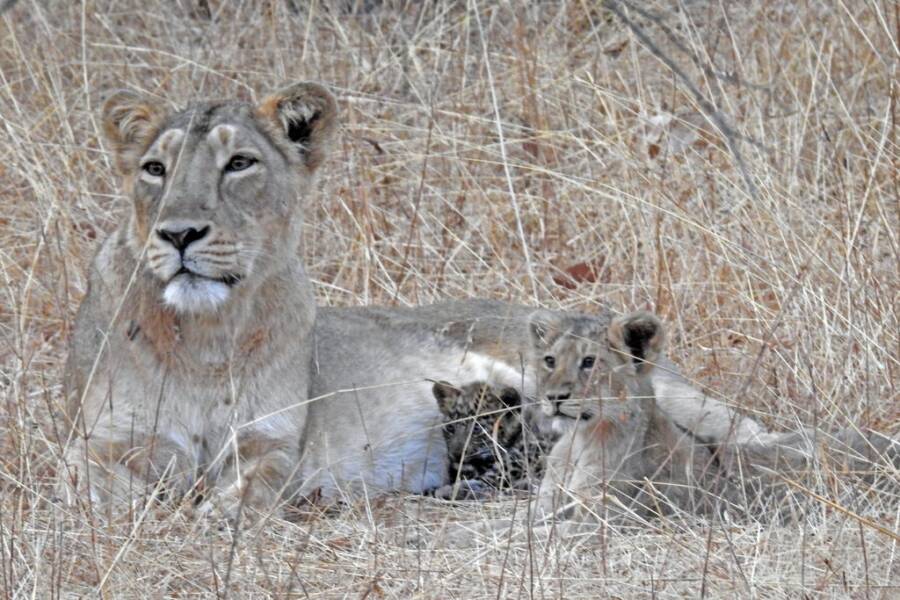 Dheeraj MittalResearchers documented the first case of interspecies adoption in the wild between lions and leopards.

Stotra Chakrabarti has been closely studying lions at India’s Gir National Park for seven years. But about a year ago, the animal behaviorist noticed something extremely unusual: One of the park’s lionesses had adopted an orphaned baby leopard as her own.

For a month and a half, Chakrabarti and his team observed the relationship between the mother lioness and her adopted leopard cub and have now reported upon the rare cross-species adoption in a new paper published last week in the ecology journal Ecosphere.

As The New York Times reported, researchers witnessed the lioness care for and protect the baby leopard along with her two biological lion cubs. The lioness nursed the baby leopard and fed it meat from her hunt. Park authorities also said that the mother appeared protective of her adopted baby, shielding it from other lions in the area.

Her two biological offspring adapted well to their spotted sibling, too. Researchers observed the cubs running around and playing with each other without any problems. “It looked like two big cubs and one tiny runt of the litter,” Chakrabarti said.

While interspecies adoptions have been documented in the wild before, they are still considered an anomaly. For it to occur between animal populations that are strong competitors within the same environment, such as the lions and leopards of Gir, is virtually unheard of.

The big cats of Gir, located in India’s Gujarat state, are “at perpetual odds,” Chakrabarti explained, fighting over food and territory across the park’s 545-square mile terrain. Yet, here was a young mother lion willingly caring for a baby leopard. 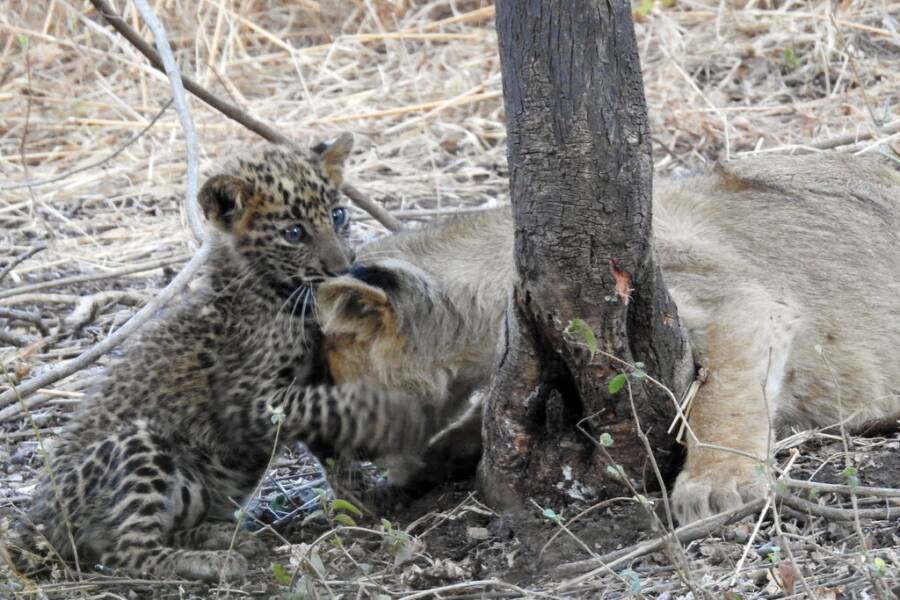 Dheeraj MittalThe lionesses’ biological cubs got along well with their adoptive leopard sibling.

In a similar incident in 2017 at Tanzania’s Ngorongoro Conservation Area, a lioness was photographed nursing a baby leopard in the wild. But the two separated after only one day. The recent cross-species adoption witnessed by Chakrabarti’s team, meanwhile, lasted for over a month.

In photos, the stark differences between the lion cubs and their adoptive leopard brother jump out straight away. Unlike the baby lions with their plain sandy-colored coats, the baby leopard’s entire body was of course covered in spots and had clear blue eyes.

Those differences will become more pronounced as they enter into adulthood, at which time they’ll also adopt their species’ social behaviors — which are quite different from each other.

However, until that time, the two species’ behaviors — including the way they beg for milk — are similar. This is perhaps why the baby leopard was able to seamlessly fit into the mother lion’s family unit.

Another factor that explains this rare event is that Asiatic lionesses usually separate themselves from the rest of the pack for a few months to raise their cubs on their own. The fact that the baby leopard only needed to be accepted by the mother’s small nursery unit made the adoption much easier. If it had happened while the mother and her cubs were still attached to the pride, the other adult lions may have rejected the leopard cub as an intruder.

Ultimately, the researchers behind the new study were unable to identify exactly what prompted the mother lion to take in the spotted orphan. But there is a likely theory based on other interspecies adoptions in the wild that have happened in the past. 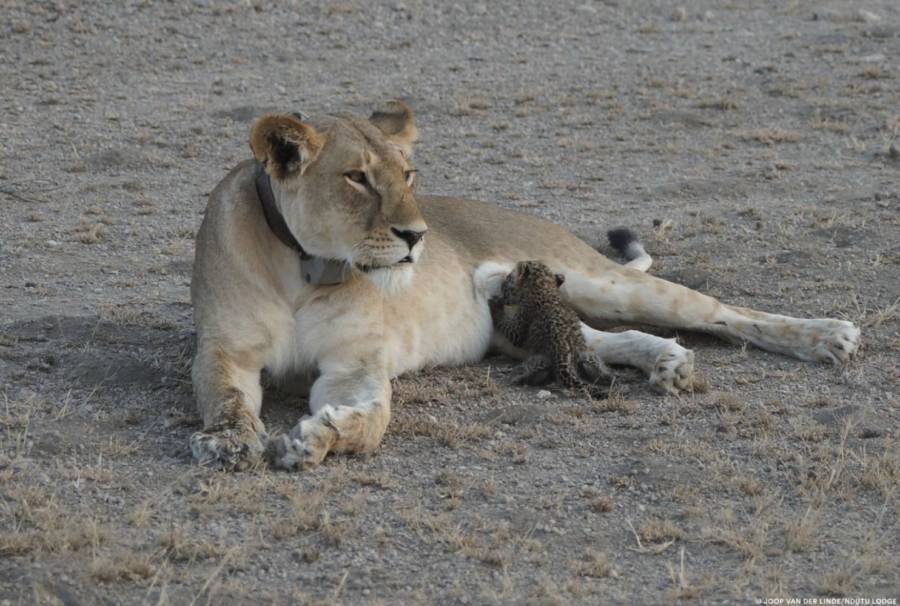 PantheraA lion nursing a leopard cub in a similar incident of interspecies cooperation inside the Ngorogoro Conservation Area in Tanzania in 2017.

In 2004, a group of capuchin monkeys in Brazil took in a baby marmoset.

A decade later in French Polynesia, another study documented a family of bottlenose dolphins that adopted an infant melon-headed whale. The baby whale even picked up the behavior of his adopted family, jumping and surfing as if he were one of them.

According to Patrícia Izar, an associate professor at Brazil’s University of São Paulo and co-author of the capuchin-marmoset adoption study, each case involved lactating mothers who took in stray babies. The assumption is that the hormonal changes that occur during motherhood in the animals “might facilitate bonding with an extraneous infant.” But this is merely a hypothesis.

Whatever may have triggered the unlikely adoption of the baby leopard, it didn’t last long. After 45 days, the research team found the leopard cub’s corpse near a watering hole in the park. A field necropsy performed on the lifeless leopard baby showed that he had likely died due to a birth defect: a femoral hernia.

“It would have been fantastic to see, when the leopard cub grew up, how things would be,” Chakrabarti pondered. “But it didn’t happen.”

Next, take a look at the rare black leopard in Africa that scientists recently documented for the first time in a century. Then, read the tragic story of a baby rhino found clinging to his mother after she was murdered by poachers.