The find could give archaeologists new insight into the customs of Europe's first farmers, the Funnel Beaker people. 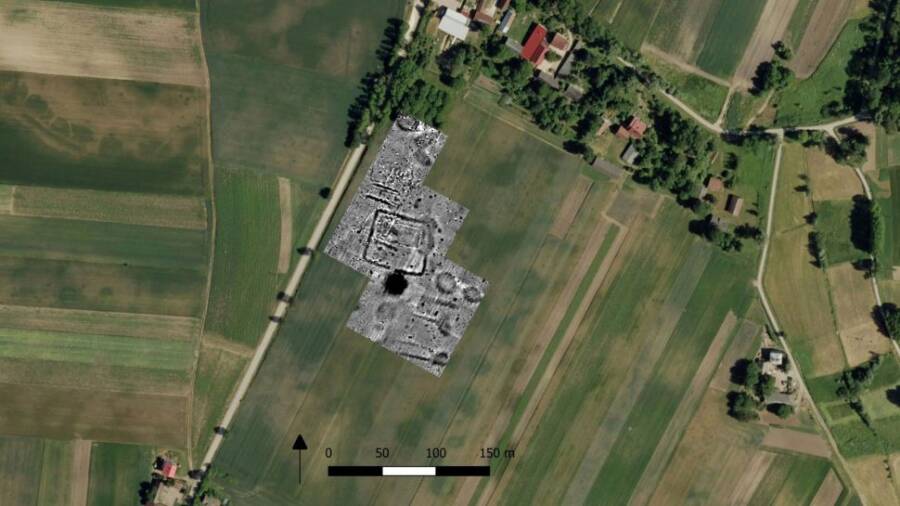 Archaeological treasures are usually discovered by digging deep into the earth. One Polish archaeologist, however, made an incredible discovery from the sky — and now he has unearthed a 5,000-year-old cemetery and a medieval fortress.

Jan Bulas, an independent archaeologist in Kraków, became intrigued after noticing straight lines on satellite images of a farm near the town of Dębiany — lines only visible from above. He went to investigate with fellow archaeologist Marcin Przybyła.

There, the pair made an astounding find: the sprawling cemetery, consisting of 12, roughly 150-foot tombs — and atop the cemetery, remains of a medieval fortress, complete with a moat. 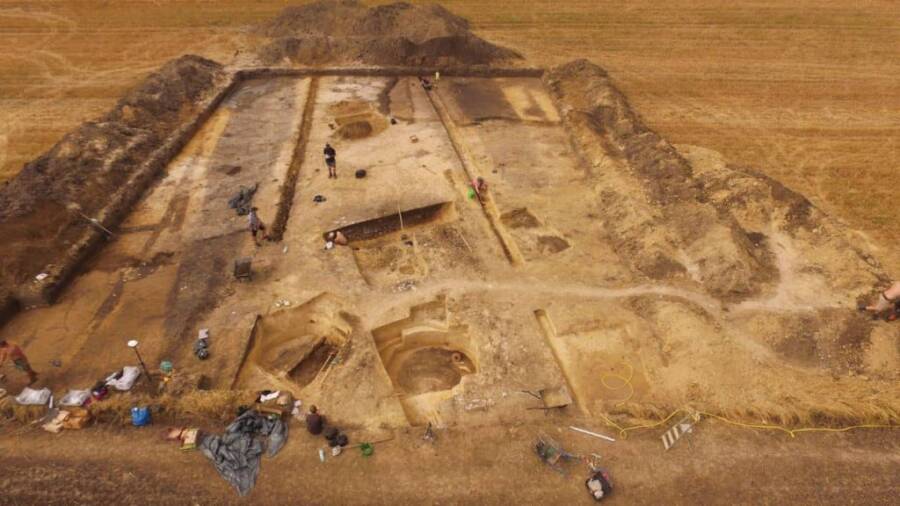 “The megalithic cemetery in Dębiany is one of the largest and most interesting sites of this type in Central Europe,” said Bulas and Przybyła.

Using magnetic gradiometers — which can detect where ground has been disturbed in the past without digging up the earth — Bulas and Przybyła found the foundations of the medieval fortress. Beneath the fortress lay even more treasure: the cemetery, which Bulas and Przybyła estimate to be around 5,500 years old.

Since they started digging two years ago, archaeologists have found seven Neolithic tombs and two horses buried during the Bronze Age, some 3,500 years ago. But they think there’s even more to uncover. Bulas and Przybyła suspect that the site could contain a dozen tombs. 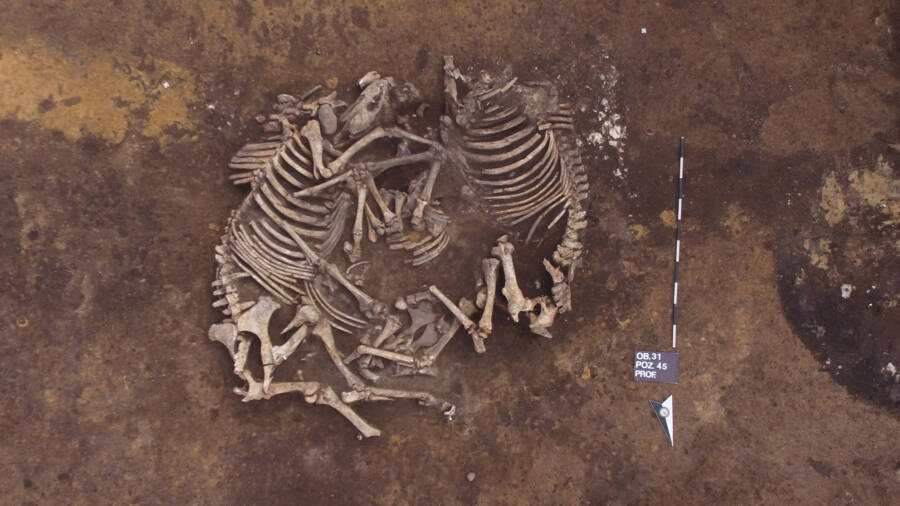 Marcin PrzybyłaTwo horses were buried in the cemetery side by side.

The tombs they’ve uncovered so far are between 130 and 165 feet long. Their longer walls were reinforced with wooden palisades, most of which have long since disintegrated — only the post holes remain. The shorter walls seem to contain an entrance to a funerary chapel.

These tombs were once barrow mounds — that is, raised earth over a grave. Bulas and Przybyła have called their discovery “megaxylons”, combining the Greek words for big (“mega”) and wood (“xylos”). The barrows they’ve found near Dębiany were once much higher. However, over time, they’ve eroded into the earth.

“Unfortunately, most of the remains of the deceased and equipment were removed from these burials while the cemetery was in operation,” Przybyła said. “It was a ritual behavior that we often encounter in cemeteries from that period.”

Built above the cemetery — perhaps unknowingly — is a fortress from the ninth and 10th centuries. In fact, the fortress is what first caught Bulas’ eye. The lines he saw on the satellite image were the outline of the medieval structure and its moat.

Both finds stretch back deep into early European history and could prove invaluable when it comes to understanding ancient cultures and their customs. The fortress even predates the establishment of the first kingdom of Poland, in 1025. Bulas and Przybyła are especially hopeful that their discovery can shed light on some of the region’s first farmers.

“[The cemetery] provides us with extraordinary data on the funeral customs of the Funnel Beaker Culture,” they said.

The Funnel Beaker people, named after the distinctive pottery they left behind, are thought to be the first farmers in Europe. They came from the Middle East, passed through the Balkans, and began to spread across Europe in 4100 B.C. 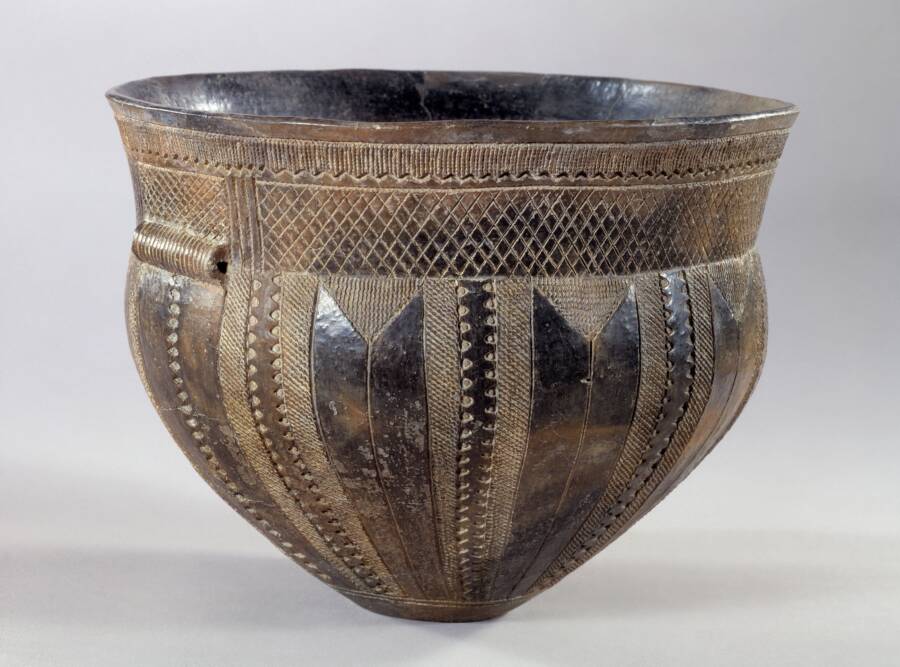 Wikimedia CommonsA piece of Funnel Beaker pottery, which dates back to 3200 B.C.

The cemetery discovered by Bulas and Przybyła bears the marks of the Funnel Beaker people. They routinely built barrow cemeteries like this one. One cemetery found in the Polish region of Kujawy contained burial mounds so big that they’re sometimes called “the Polish pyramids.” 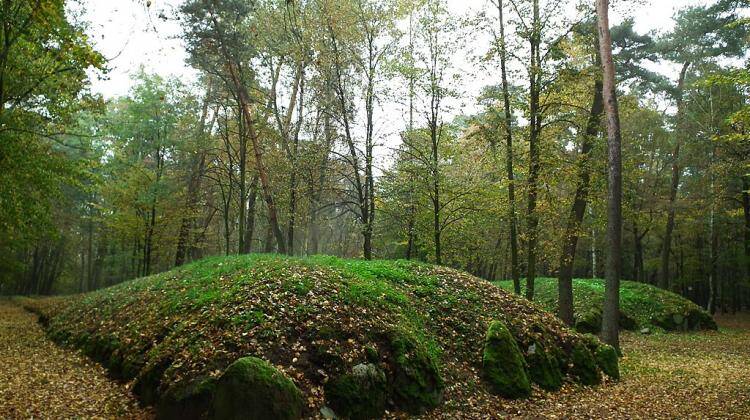 Alongside the cemetery, archaeologists are eager to learn more about the fortress itself. It’s not presently clear what purpose it served or how many people lived there.

“[The fortress] was not permanently inhabited,” explained Przybyła. “Perhaps it served as a military camp, or an object associated with religious or social rituals.”

Beyond the history — and mysteries — the fortress structure holds, it appears to be one-of-a-kind. “It is worth noting that this is the only such structure known in Poland,” Przybyła said.

For now, Bulas and Przybyła plan to continue their investigation of the site to see what other treasures from the past they can unearth.

They’ll continue to excavate the cemetery to learn more about the Neolithic barrows and tombs. And they’re curious to see what they can learn from the apparently more recent fortress — as well as what it can tell them about medieval life in Poland.

After reading about the cemetery spotted by satellite, learn about the discovery of the Gobekli Tepe, a temple even older than Stonehenge. Then, check out this 1,400-year-old Anglo-Saxon cemetery and its ghostly “sand silhouettes.