1,400-Year-Old Cemetery Marked By Ghostly ‘Sand Silhouettes’ Could Have Ties To Ancient Kingdom

Archaeologists speculate that the seventh-century cemetery was once a part of the Anglo-Saxon Kingdom of East Anglia. 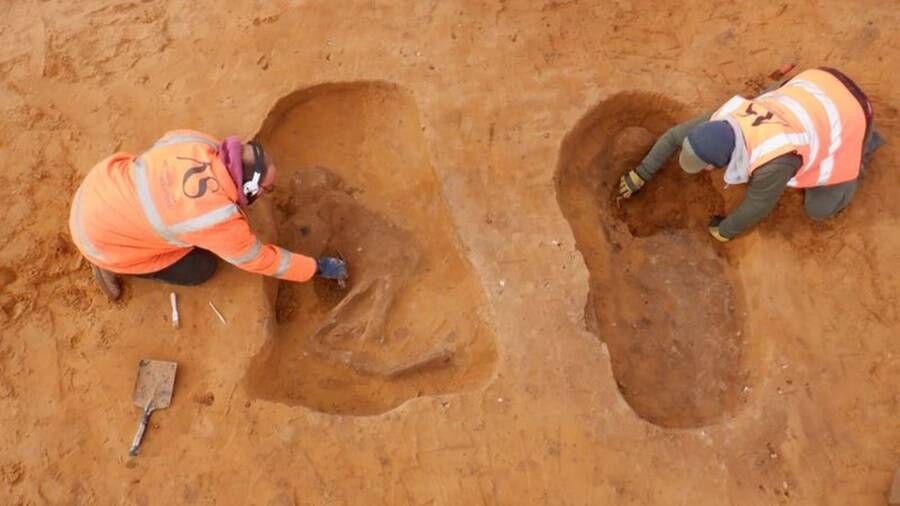 Suffolk County CouncilThe skeletons were reduced to an ashy stain due to the highly acidic soil they were buried in.

Construction workers in Suffolk, England, were shocked to discover 200 seventh-century graves eerily marked by ghostly shapes while preparing to build a housing development.

According to BBC News, the 1,400-year-old cemetery in Oulton near Lowestoft in Suffolk was once an Anglo-Saxon burial ground containing the remains of 200 men, women, and children, all believed to have been a part of the same farming community.

Many of the skeletons have been reduced to ashy stains or “sand silhouettes” as they were eaten away by the acidic soil around them. Indeed, no bones remain in many of the graves, but rather the dark outline of the corpse that was once laid there.

“Due to the highly acidic soil, the skeletons had mostly vanished and were luckily preserved as fragile shapes and shadows in the sand,” said Andrew Peachey of Archaeological Solutions Ltd., which carried out the excavations.

Peachey also revealed that the remains came from 17 cremations and 191 burials that were “painstakingly excavated.” These remains are suspected to have belonged to residents of a now-disappeared small farming community in the area. 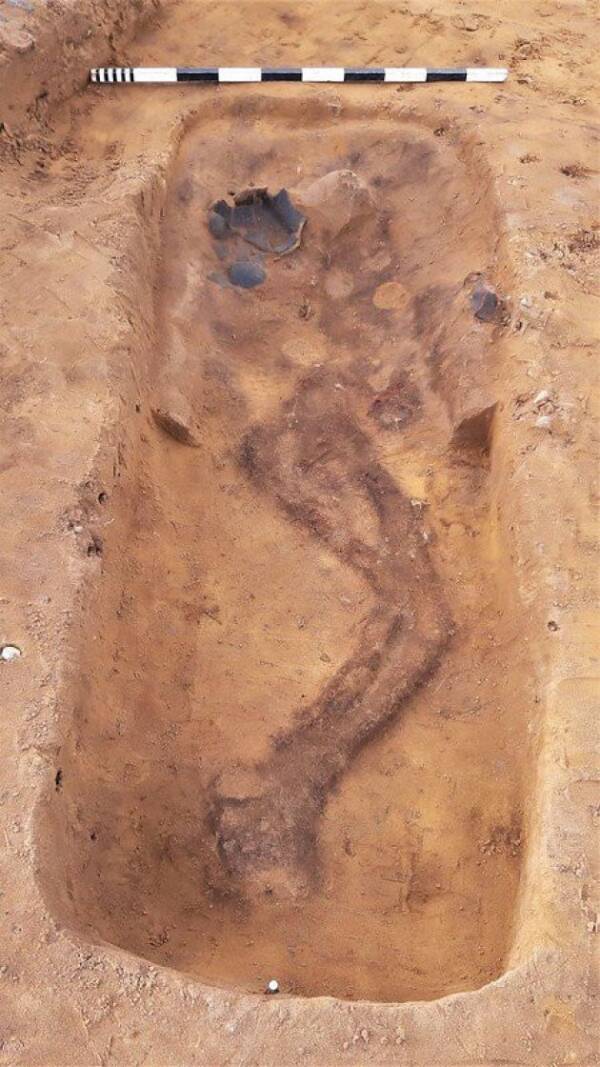 Suffolk County CouncilThe find has been hailed as “nationally significant.”

Besides shaping the ghostly outlines of the deceased, these shadowy sand silhouettes also revealed “traces of the wooden coffins that some of the individuals were buried in,” said Peachey. But the shadowy figures aren’t the only things researchers found.

The excavation team also uncovered a number of objects inside the cemetery. Among them were amber and glass beads, silver pennies, wrist clasps, copper-alloy brooches, and small iron knives. Many of the uncovered graves also contained artifacts like pottery and various weaponry, including a sword, iron spearheads, and at least one shield.

The discovery is remarkable for another reason. This 1,400-year-old site is located 40 miles away from Sutton Hoo, a famous royal Anglo-Saxon burial ground comprised of two cemeteries from the sixth and seventh centuries where corpses were buried lavishly, with jewels and treasures. One cemetery even contained a ship. Artifacts found at Sutton Hoo reflected obvious influences of Scandinavian and Frankish culture, and some items even showed connections to the Byzantine empire in the eastern Mediterranean.

Sutton Hoo is also believed to be the final resting place of King Raedwald of East Anglia, an Anglo-Saxon kingdom that included the modern-day English counties of Norfolk and Suffolk. Like the individuals responsible for Sutton Hoo, the community behind the cemetery in Oulton may have had ties to the Kingdom of East Anglia, per a statement. 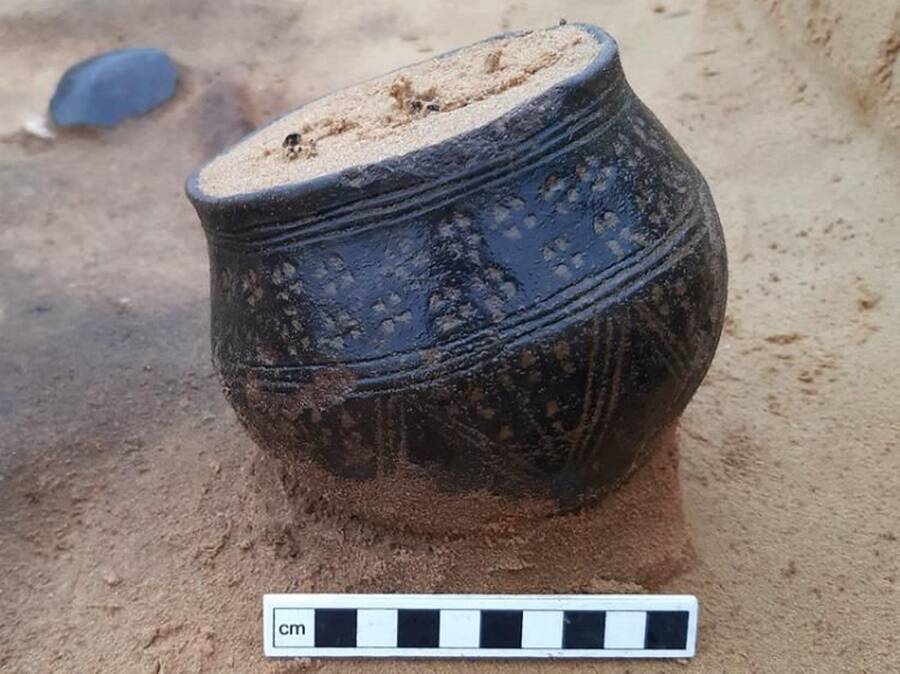 Excavating these “nationally significant” items posed a great challenge to archaeologists as they were found in delicate condition.

“Many of the artifacts were so fragile they had to be block lifted for micro-excavation in the labs at Norfolk Museum Service for analysis and conservation,” Peachey explained. Luckily, researchers were ultimately able to fully excavate the area without causing any serious damage.

According to the Suffolk County Council, all the artifacts will now undergo post-excavation analysis. The ancient cemetery has since been recorded and cordoned off for further research while the rest of the land has been okayed for construction. The site and all its finds will be meticulously documented and archived within the Suffolk County Council’s Archaeology Service. Eventually, these items will be available to other researchers and local museums to display to the public. 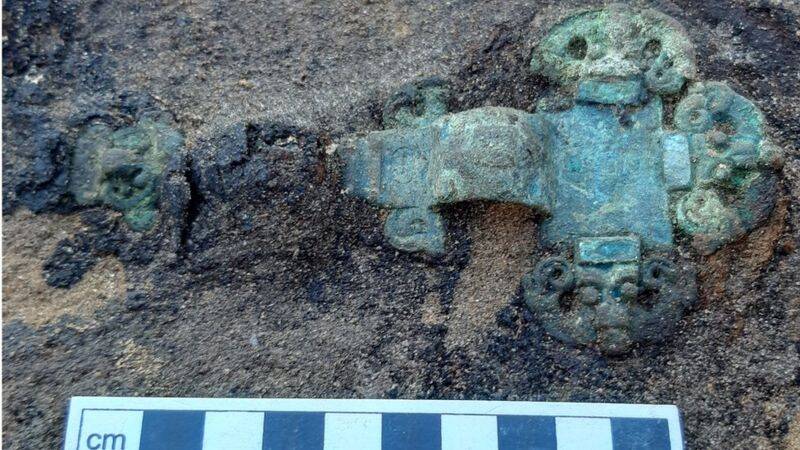 Archaeologists have yet confirm whether the small farming cemetery that was discovered is, in fact, tied to the Kingdom of the East Anglia, but further analysis will likely be able to answer that question in the near future.

“It is important we oversee and record this work so that we can understand the community buried here and its connections to other finds in Oulton and the nearby settlements and cemeteries at Carlton Colville and Flixton,” said a spokesman for the Suffolk County Council Archaeological Service.

With such a rich history in the region, it’s likely that archaeologists will soon uncover the answers to all these questions in the soil nearby.

Next, check out the 3,000-year-old Scottish weapons found underneath a soccer field. Then, see the ornate 18th-century sword that a 10-year-old boy found while trying out his new metal detector for the first time.