In a world where 39 percent of all carbon emissions in the world stem from building and construction industries, this beautiful piece of architecture is not only appealing — but vital. 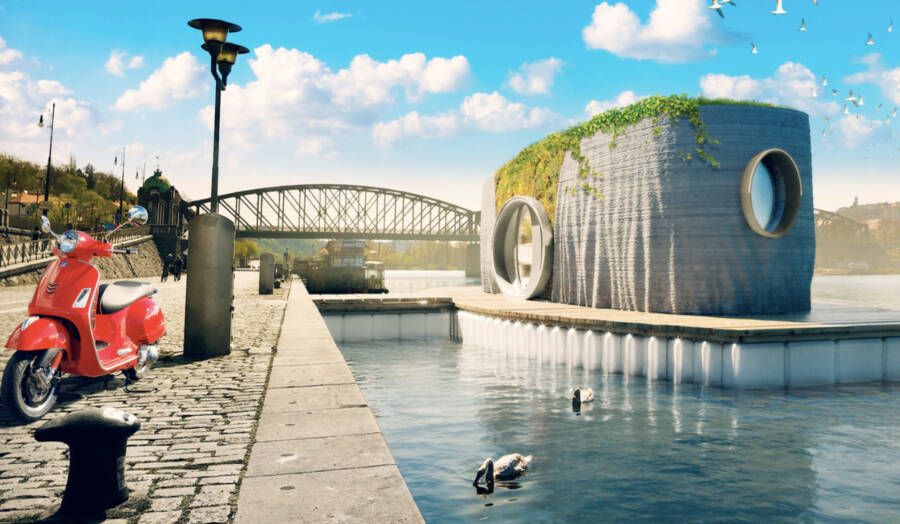 BurinkaThe house will debut on the Vltava River in Prague.

The first 3D-printed house in the Czech Republic is set to be unveiled in Prague on August 18. The remarkable prototype was built in Ceske Budejovice in only 48 hours. Once the components have finished drying off, it’ll be shipped to Prague to float in the Vltava River while tied to a pontoon.

According to EuroNews, the impressive project is dubbed Prvok od Burinky and came from the mind of sculptor Michal Trpak, in collaboration with Burinka — a construction and housing company that specializes in 3D printing.

Building the components of the house took a mere 22 hours, while properly piecing them together took no more than two days. Though that’s certainly impressive on its own, the interior design and sustainability-conscious architecture is even more stunning.

Only last September, the World Green Building Council reported that 39 percent of all carbon emissions in the world stem from building and construction industries. According to Apartment Therapy, this project not only cuts construction costs in half, but curbs emissions in plenty other ways.

A detailed look at the fascinating construction process of the Prvok home.

This feat of sustainable living has solar panels plastered on its exterior and uses heat pumps to transfer the harvested energy inside. Amenities such as hot water use that harvested energy — freely obtained from the sun.

While the Prvok will debut in a rather populated city and float in its river, the house is suitable for all sorts of environments. It could easily be situated in forests, just as well as on properties in the suburbs of any given metropolis. At 462 square feet, it has a small footprint.

The home includes a living room connected to an open kitchen, one bedroom, and one bathroom. It also has a recirculating shower and several reservoirs for drinking water, utility water, and sewage. 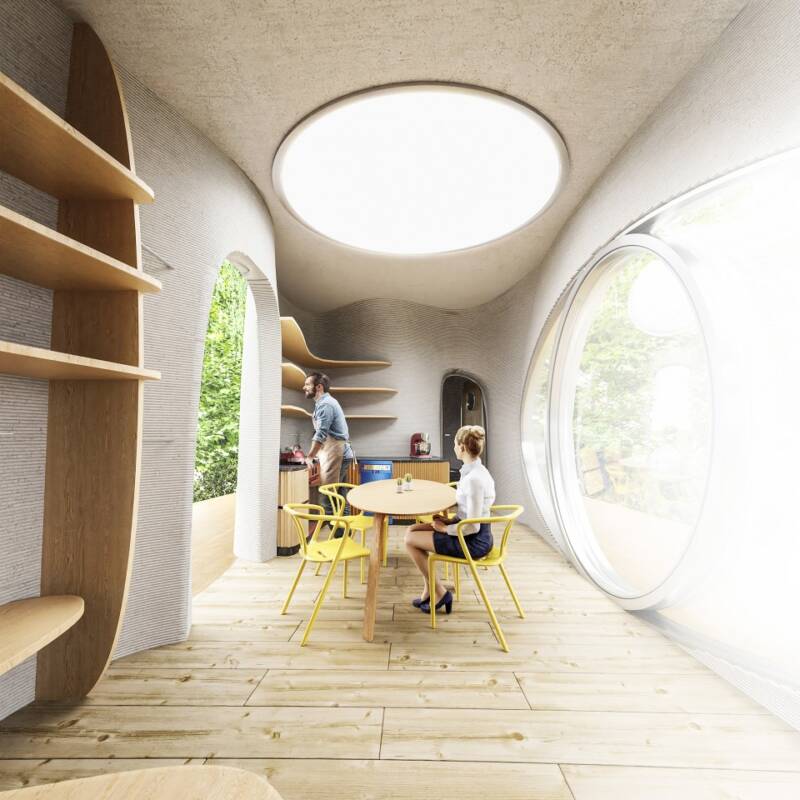 Built by a robotic arm, the home’s components consist of a concrete mixture specially developed for Trpak’s creation. According to the 3D Printing Media Network, it makes the home’s printed shell three times stronger than if standard concrete was used.

According to the Prvok and Burinky press release, the eco-friendly house can even withstand an avalanche. The Experimental Center of the Faculty of Civil Engineering at the Czech Technical University in Prague conducted a full mechanical resistance and stability test to confirm as much. 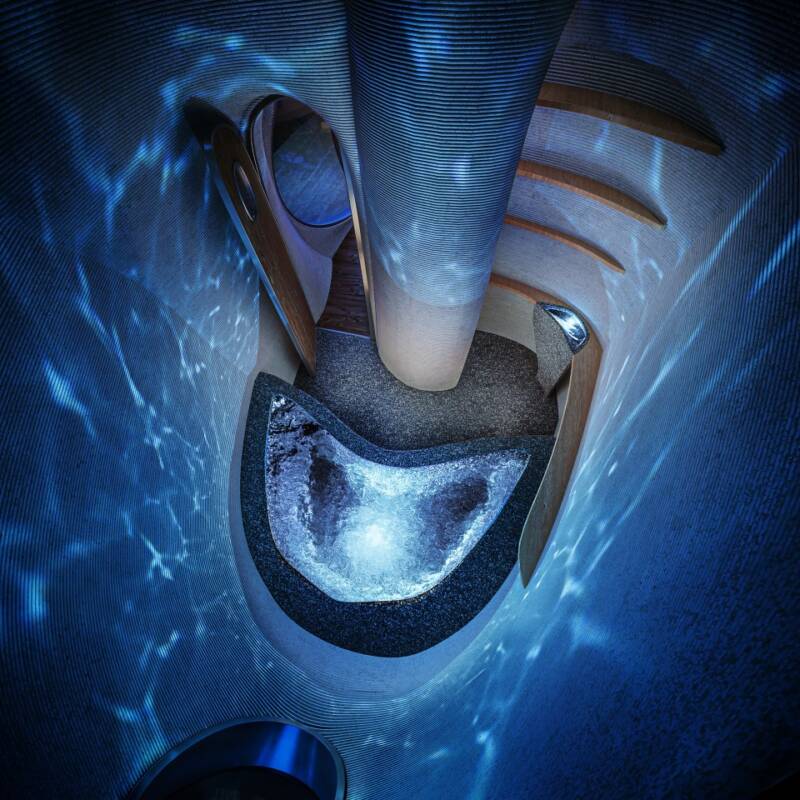 “Compared to conventional brick buildings, 3D printing also generates up to 20 percent fewer CO2 emissions, which the European Union aims to cut by 30 percent by 2030,” said Libor Vosicky, CEO of Burinka. “It requires only about 25 workers to print one house (instead of 65).”

Though the house was fully printed in June, letting the pieces dry, curating the home’s interior, and fine-tuning everything has taken a few months.

“In the future, the owners can crush the building once it has run its useful life, and print it again with the same material directly on the location,” said Trpak.

While this is undoubtedly a very exciting project that is likely to impress viewers in Prague next week, those involved are aware their job is far from finished. 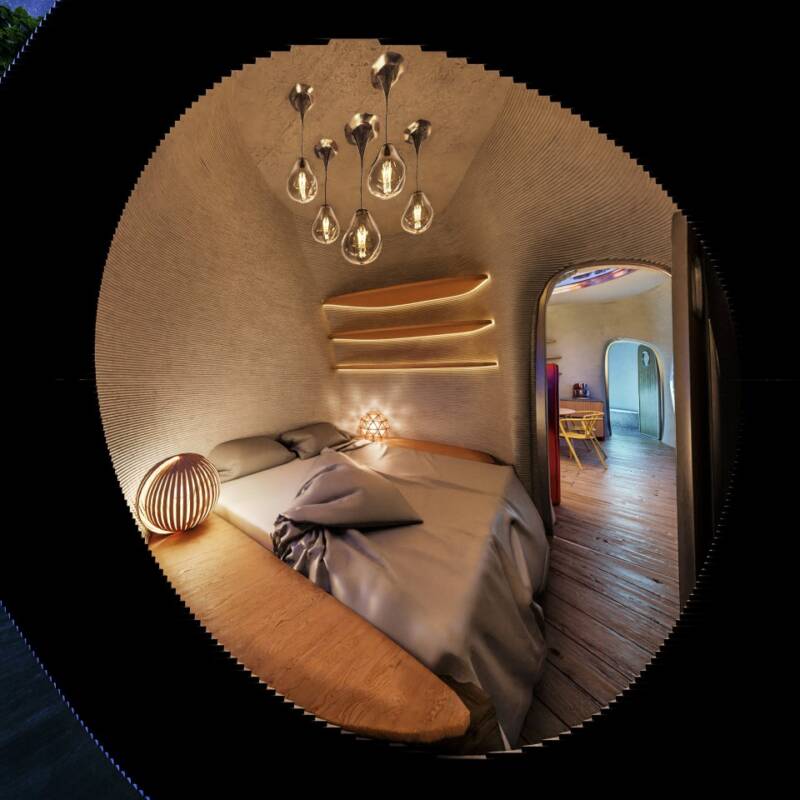 BurinkaThe one-bath, one-bedroom house has 462 square feet of floor space and can feasibly be placed anywhere.

Jiri Vele, one of the architects who participated in Prvok, is adamant that awareness and education are imperative to make a proper dent in emissions by transitioning to 3D printing.

“In order for the 3D-printing technology to become part of the construction industry, we need to introduce it to researchers as well as architects, builders, government, and other authorities,” he said. “New study fields must be created.”

Ultimately, 3D printing endeavors like this are a convincing testament of how viable this industry is. In the Czech Republic, particularly, around 46 percent of waste production stems from the demolition and construction industries.

While the future remains uncertain, Vosicky appears to have a point — which audiences in Prague will be able to experience first-hand come Aug. 18, 2020.

After reading about the Czech Republic’s first 3D-printed house, read about the eco-friendly Hobbit House of Wales. Then, learn how 3D printing will change the world.