Meet The Pufferfish, The Deadly Delicacy That Can Kill You In Hours And Costs $200 A Plate

Also known as the blowfish, the pufferfish is 1,200 times more poisonous than cyanide. But in Japan, it's also a pricey dish called fugu.

Experts believe that pufferfish developed their peculiar “inflatability” as a result of their slow swimming style. Once pursued, the animal fills its remarkably elastic stomach full of water to scare predators off. With 120 pufferfish species in the Tetraodontidae family, however, features may vary.

Some pufferfish have an extra defense against attacks — spines on their skin that jut out when they inflate. And nearly all blowfish are loaded with deadly poison.

Lethal for human beings, the tetrodotoxin that pufferfish carry in their flesh guarantees death to nearly all who consume it. However, for the pufferfish themselves, the poison seems to serve as a stress reliever.

In Japan, the pufferfish is carefully prepared as a delicacy known as fugu by chefs specially trained to remove its poisonous parts. And this diverse fish has even more tricks up its gills.

From their intricate courtship rituals to turning up in the waters of Nintendo’s popular Animal Crossing game, the pufferfish is one of the most interesting creatures of the sea.

Pufferfish are part of the Tetraodontidae family, which contains 120 varieties. Of these, all are marine or estuarine fish.

With such diversity among the group, these carnivores vary in size anywhere between the one-inch-long dwarf or pygmy puffer to the freshwater giant puffer which grows up to two feet long.

Most pufferfish are found in tropical ocean waters, though some species inhabit brackish and freshwater environments. Not unlike snakes, some of them are characterized by colorful patterns that denote their toxicity — while all have long and tapered bodies and round heads.

Pufferfish have four teeth that are fused together into a sort of beak, which they use to eat algae and invertebrates. Some larger species use their beaks to crack open clams and other shellfish.

Recently, these fish have been making a splash in Nintendo’s popular Animal Crossing game, which allows players to cast a line and catch a pufferfish in the ocean during the summer months.

The scaleless fish is typically rough-skinned and often has rows of spikes that stand up when they inflate. Most dangerous, of course, is the toxic substance found in their liver, gonads, and skin. The poison doesn’t only kill other fish, however, as the animal’s culinary preparation doesn’t always go as planned.

The Deadly Poison Of Pufferfish

Tetrodotoxin makes pufferfish taste horrible, plus it’s mostly lethal to the fish who ingest it. As for humans, the neurotoxin can be up to 1,200 times more poisonous than cyanide. 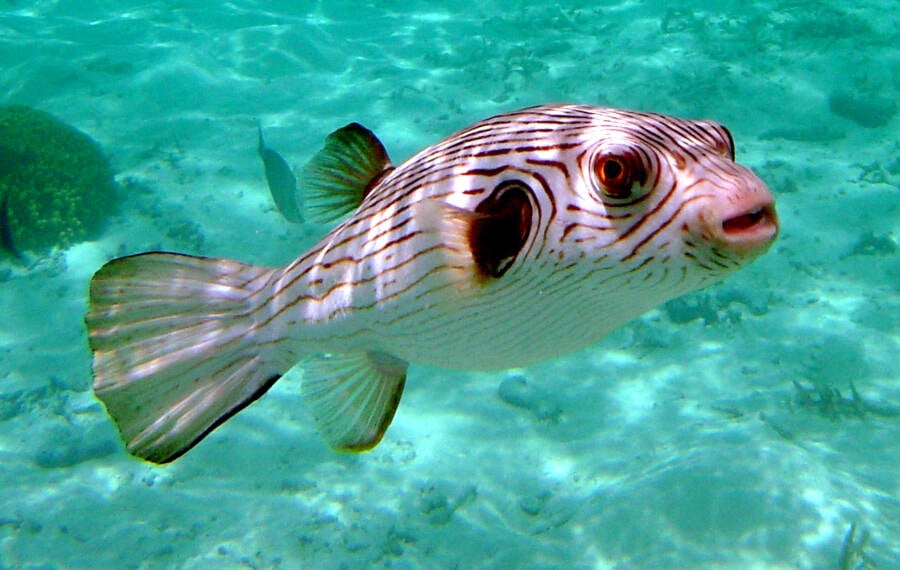 Wikimedia CommonsSome pufferfish can be recognized as poisonous by their wild and colorful exterior.

In simpler terms, one pufferfish contains enough toxin to kill 30 healthy adult human beings, and there is currently no known antidote.

Deaths from this poison generally occur from respiratory failure, as a result of the diaphragm muscles ceasing to contract, and typically occur within six hours of ingestion. Those who survive the first 24 hours after poisoning will generally live through it.

A Business Insider segment on the fugu delicacy.

Ethnobotanist Wade Davis researched the pufferfish’s poison in Haiti in the 1980s and argued this is where the notion of zombies came from — as voodoo sorcerers claimed they could turn locals into the undead. Curiously, he collected and tested samples of the ritual powders they used — which contained tetrodotoxin.

Oddly, one study found that the tetrodotoxin seems to serve as a stress reliever for the blowfish. Pufferfish don’t make the toxin themselves but pick it up from a bacteria in their diet, so scientists raised pufferfish in a controlled environment that prevented them from becoming poisonous.

Compared to their toxic brethren, these captive pufferfish had higher levels of stress hormones, didn’t grow as big, and displayed more aggressive behavior. Scientists don’t yet understand exactly how the poison soothes the pufferfish, but it does seem to have a calming effect.

Though the thought of ingesting a blowfish’s poison makes lots of humans anxious, pufferfish have become a culinary treat in places like Japan. Known as fugu, the delicacy will cost you a pretty penny, often upwards of $200 a plate.

Though only properly trained and licensed chefs purportedly serve fugu, the risk factor is enormous. One bad cut translates to certain death, with about six such cases of fatal poisoning reported each year in Japan. 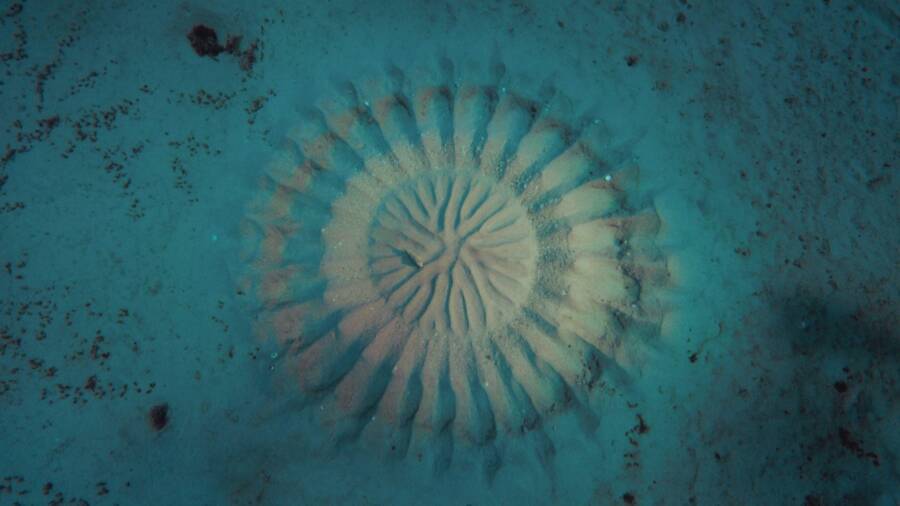 PBSOne species of pufferfish spends 10 days constructing geometric nests made out of sand and corals to attract a female mate.

“Master chefs cut them into the shapes of chrysanthemum petals, Mount Fuji or into animals like peacocks, turtles and butterflies,” said fugu wholesaler Toshiharu Hata. “Every plate is a work of art, every dish is a work of science.”

However, there’s another reason the pufferfish has often been compared to art — its stunning courtship ritual.

Beauty And The Blowfish

In 2013, a study published in the Scientific Reports journal found that a newfound species of pufferfish in the Torquigener genus spends days constructing underwater structures to court females. The male fish is up to five inches long, and uses its body to build peaks and valleys around a circle in the sand.

Next, the species forms jagged and irregular patterns in the center and then decorates the outer circle with shell and coral fragments. When a female puffer arrives, the male stirs up the sand in the center — and prays she deems both the nest and its maker a fine enough suitor to mate with.

Scientists aren’t sure yet what specifics the courted pufferfish look for, though symmetry is currently a well-wagered guess. What is clear, of course, is how the animal reproduces. Pufferfish are oviparous, meaning the female lays eggs without the help of a male.

For this species, however, it’s the male who takes care of the young. Once the female drops her eggs in the makeshift nest, the male stays there until they hatch six days later. Afterward, he moves on to another location to start work on another carefully crafted nest all over again.

Ultimately, it’s no wonder David Attenborough called the pufferfish “the greatest artist of the animal kingdom.” After all, it’s not every day that you find a fish that can build artistically valid works out of sand — without the advantage of limbs or consciousness as we know it.

After learning about the toxic and entrancing pufferfish, read about seven of the most mysterious ocean animals. Then, check out 30 photos of weird creatures pulled up by unsuspecting deep-sea fishermen.