Unidentified For Nearly A Millennium, The Bones Found In A U.K. Cathedral May Be Queen Emma’s

The contents of six mortuary chests in Winchester Cathedral have finally been analyzed and radiocarbon-dated. As it stands, all signs point toward Queen Emma of Normandy being one of the 23 individuals. 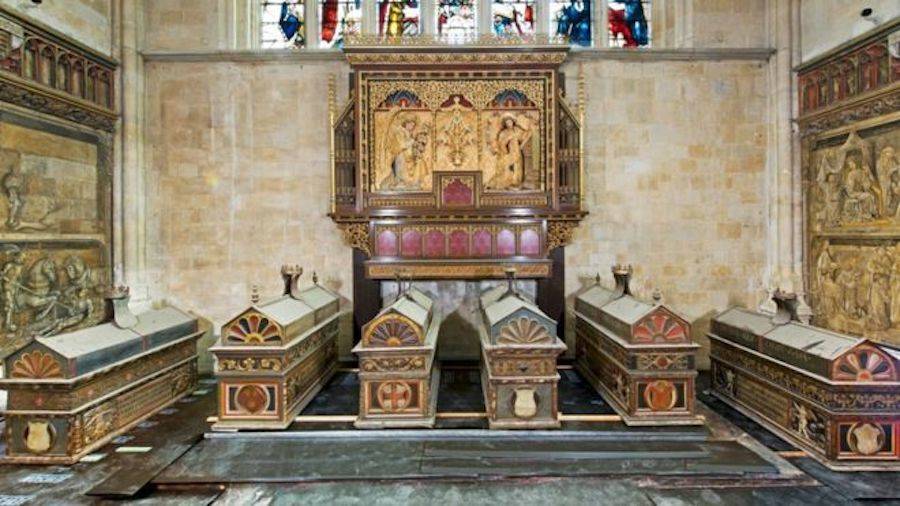 Winchester CathedralThe six chests were though to contain the remains of 12-15 people, with latest analysis showing at least 23 sets of remains.

When anthropologists from the University of Bristol found six mortuary chests in Winchester Cathedral, they carefully analyzed and radiocarbon-dated its contents. According to the BBC, the bones within belonged to at least 23 individuals — one of which is likely to have been Queen Emma of Normandy.

As a historical figure, Queen Emma was quite an interesting monarch. Married to two kings of England — King Ethelred and King Cnut — she was born in the 980s A.D. to her father Richard I, the Duke of Normandy. Her political contributions, namely giving the dukes of Normandy a hereditary claim to England’s throne, led to the Norman Conquest in 1066.

The Latin inscription on one of the discovered mortuary chests reads, “mother and wife of the kings of the English.” Scientists dated the chests to the late Anglo-Saxon and early Norman periods, and identified the bones of a mature female as possibly being those of Queen Emma of Normandy.

Despite scientific advances in radiocarbon dating and osteological analysis, the ravages of history have made accurate conclusions difficult. 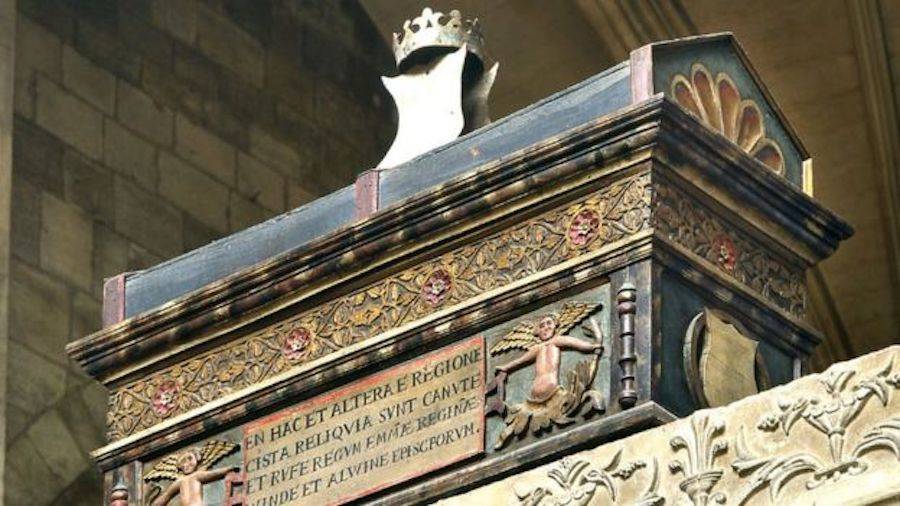 Winchester CathedralThough the mortuary chests had inscriptions stating who was buried within, the church was ransacked in 1642, and remains were thrown about by soldiers.

When Winchester Cathedral was plundered by Roundhead soldiers during England’s Civil War in 1642, the contents of these chests were scattered and mixed up. Locals repacked the mortuary vessels, but we don’t know how they chose which bones to put in which container — or even whether they repacked all the same bones.

Research on the vessels began in 2012, and over 1,300 bones have been reassembled. As expected, the bones comprising Queen Emma’s supposed skeleton were found packed into multiple, disparate chests. In order to confirm the well-founded hunch, scientists are currently analyzing the bones’ DNA to remove any doubts.

Initially, the team estimated these chests to contain the remains of 12 to 15 people, but as the project continued, the figure rose to a minimum of 23. These included the skeletons of two boys aged 10 to 15. 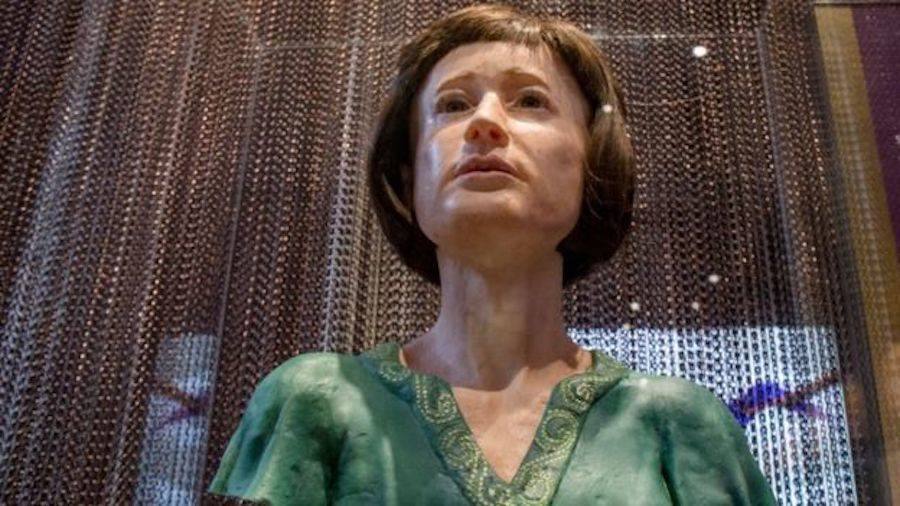 Winchester CathedralThe skeletons of two boys aged between 10 and 15 were found among the remains. The cathedral now has a reconstruction on display.

According to The Vintage News, Emma was wed to her first husban when she was just a teenager. When the Ethelred died, she was married off to Cnut, a Viking ruler.

Queen Emma of Normandy had children by both husbands, and was herself a descendant of Vikings. Her ancestor, Rollo, was a Viking warrior who became Normandy’s first duke before he died in 930 A.D. Her second husband, Cnut, was also king of Denmark and Norway.

Queen Emma died in Winchester in 1052, and was buried with her husband, Cnut, and son, Hardacnut, who died of a stroke 10 years prior. Edward the Confessor, her son by Ethelred, was one of the last Saxon kings of England. When he died childless in 1066, it led to the overthrow of the Saxons by the Normans.

A millennium later, scientific advances might provide a glimpse of what life was like back in 11th century England.

“Our ongoing research will reveal aspects of their diet, the diseases they suffered from, and the physical activities they engaged in,” Bristol University osteologist and biological anthropologist Heidi Dawson-Hobbis told The Independent.

“The current scientific research is extremely important because it complements the historical information we are also amassing,” added John Crook, Winchester Cathedral’s archaeological and historical consultant. 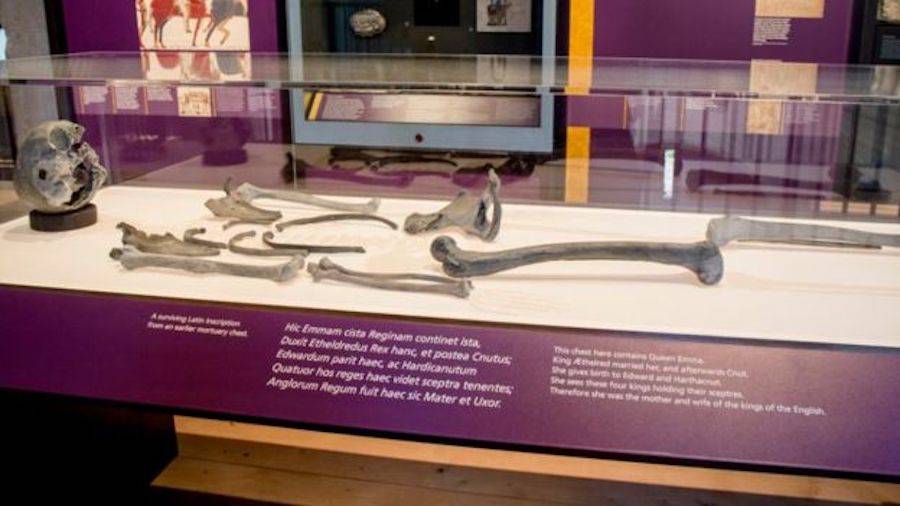 Winchester CathedralQueen Emma’s bones were reconstructed using 3D printing for the ‘Kings and Scribes: The Birth of a Nation’ exhibit.

Professor Kate Robson Brown is largely convinced that the findings are “almost certainly of royal blood.” “We cannot be certain of the identity of each individual yet, but we are certain that this is a very special assemblage of bones,” she said.

A 3D-printed reconstruction of Queen Emma of Normandy’s suspected bones is currently part of an exhibit called “Kings and Scribes: The Birth of a Nation” at Winchester Cathedral.

The caskets are once again on display next to the church’s high altar, with the real bones contained in a “safe and secure environment” as the studies continue.

After learning about Queen Emma’s bones being discovered in an English cathedral’s mortuary chests, read about how Irish Pirate Queen Grace O’Malley defied Elizabeth I and conquered a man’s world. Then, learn about Queen Nzinga, the West African leader who fought off slave traders.