A train-hopping serial killer, Ángel Maturino Reséndiz murdered up to 23 innocent people in Mexico and the United States in the late 1980s and '90s. 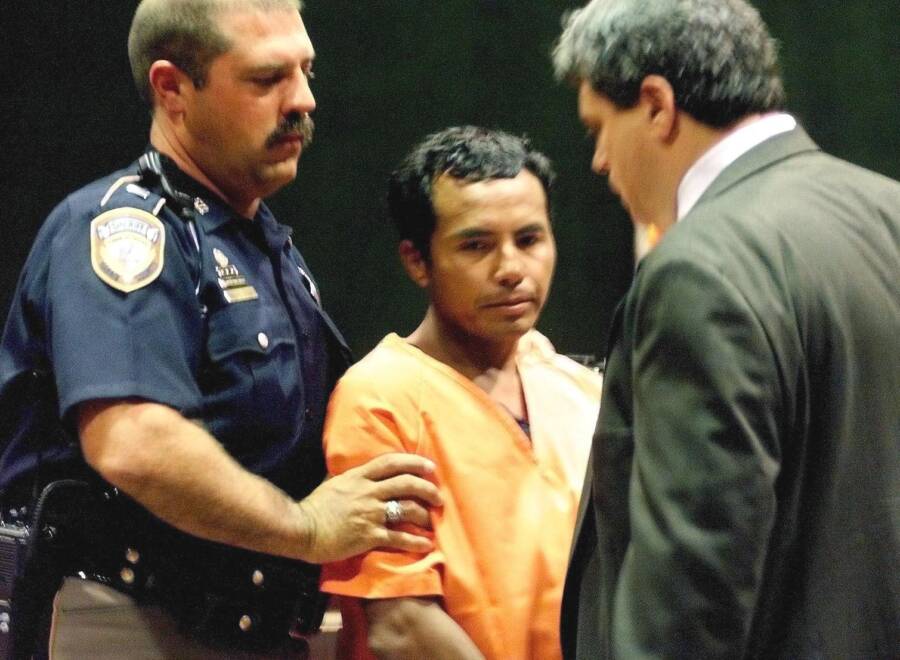 Am itinerant Mexican serial killer who illegally rode freight trains across the U.S., Ángel Maturino Reséndiz hopped on and off at will to target victims he found close to the railroad. His attacks were distinctive for their brutal blows to victims’ heads, often caused by objects found in the victims’ own homes. Known as the Railroad Killer, he was at one point the FBI’s most wanted fugitive.

The FBI linked the Railroad Killer to at least 15 murders across several states in the 1990s — and only one woman survived to tell the tale, after being beaten, raped, and left for dead. And after Ángel Maturino Reséndiz escaped capture several times by being voluntary deportated back to Mexico, it would take the combined effort of an FBI task force and the Railroad Killer’s own sister to finally bring him to justice in 1999. 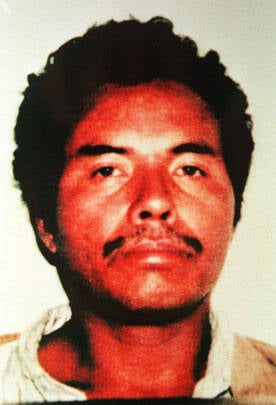 According to Justice Department documents, Reséndiz was born on Aug. 1, 1959, in Puebla, Mexico, as Ángel Leoncio Reyes Recendis. At age 14, he illegally entered Florida, before being deported in 1976.

In fact, over a 20-year period, Reséndiz was deported or voluntarily returned to Mexico 17 times, having illegally entered the U.S. using a series of aliases. Convicted on at least nine occasions for serious felonies, including burglary, Reséndiz would be deported after he served his sentence — then head right back to the U.S. to resume his criminal activities.

Drifting back and forth across the border, Reséndiz illegally hopped freight trains while working seasonal migrant farm jobs, riding railcars to Florida for orange-picking season or up to Kentucky to harvest tobacco.

In 1986, Reséndiz killed his first victim: an unidentified homeless woman in Texas, according to The Houston Chronicle. But it wasn’t until Reséndiz killed two teenage runaways in 1997 near railroad tracks in central Florida that investigators linked those slayings to his previous crimes and realized that they had a serial killer on their hands.

The Gruesome Crimes Of The Railroad Killer 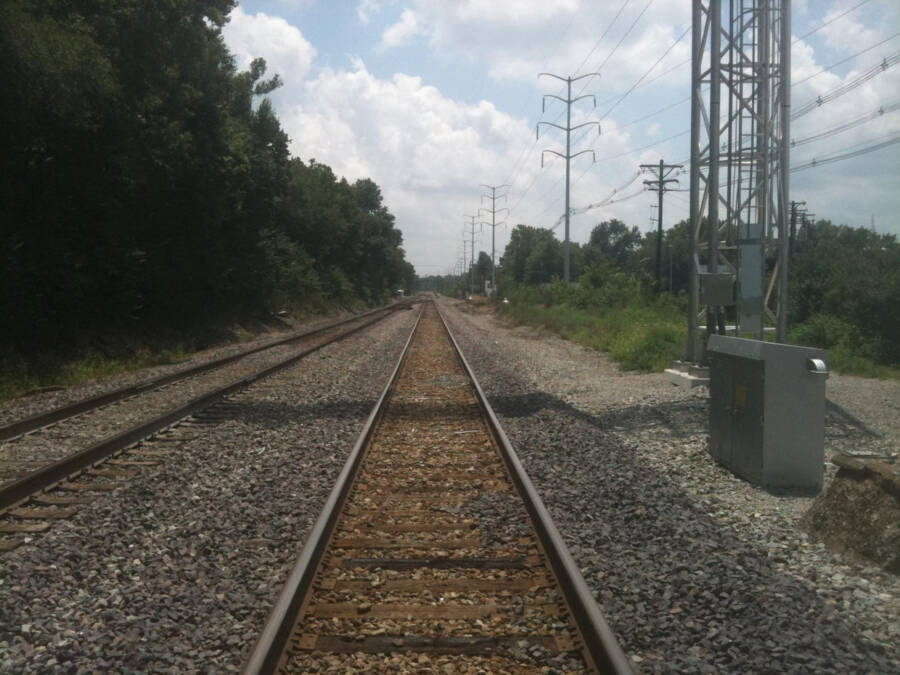 On the night of Aug, 29, 1997, in Lexington, Kentucky, young couple Christopher Maier and Holly Dunn were walking along railway tracks back to a party near the University of Kentucky when Reséndiz suddenly emerged from a crouched position behind a metal electrical box.

Binding the terrified couple’s hands and feet and gagging Maier, Reséndiz wandered off — then came back with a large rock, which he dropped on Maier’s head. Reséndiz raped Dunn, who stopped struggling when he reportedly told her just how easy it would be for him to kill her.

Reséndiz continued riding the rails and committing murders across several states, with the ferocity of his attacks increasing with each stop. His murder spree was only interrupted when he was detained by the Immigration and Naturalization Service. But once he was free, his killings continued anew.

After having beaten two elderly women to death in their Texas and Georgia homes, Reséndiz entered the Texas home of Claudia Benton late at night on Dec. 17, 1998. Benton was soon found beaten to death with a statue in her bedroom — and Reséndiz was far from finished.

On May 2, 1999, he entered the Weimar, Texas, home of a pastor and his wife. In their house, situated behind the church and near the railroad tracks, Reséndiz beat Norman and Karen Sirnic to death with a sledgehammer as they slept, then sexually assaulted Karen.

The search for Reséndiz now received widespread national media attention, even appearing on an episode of America’s Most Wanted.

How The Railroad Killer Evaded Detection 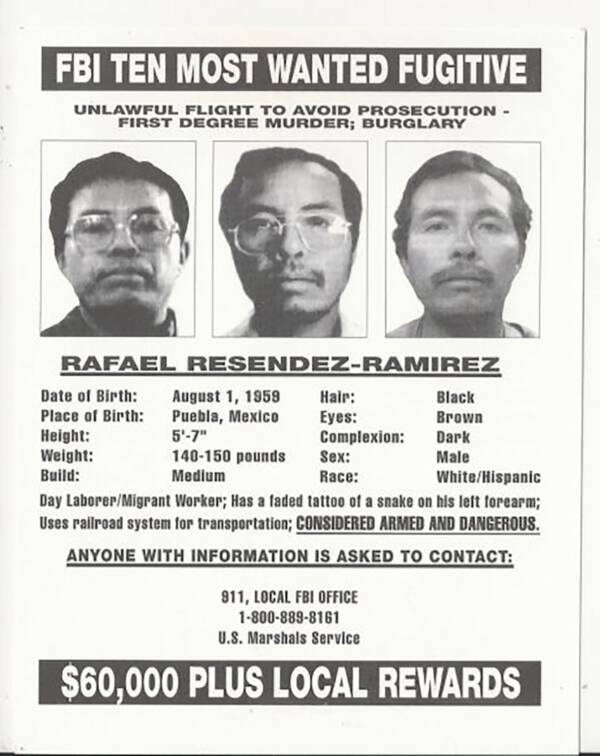 The FBI saw similarities between the Benton and Sirnic murder scenes, and DNA obtained from both came back as a match. The connected crime scenes were entered into VICAP — the nationwide data information center that collects, collates, and analyzes information on violent crimess.

The Kentucky murder of Christopher Maier, which Holly Dunn miraculously survived, seemed to match aspects of the murders of Benton and the Sirnics — and the DNA once again matched as well. The FBI then obtained a federal warrant for Reséndiz’s arrest in late May 1999, and formed a multi-agency task force to apprehend him.

Over an 18-month period, the INS detained the Railroad Killer nine times, but, hiding behind fabricated identities, Reséndiz was voluntarily returned to Mexico on each occasion. But the INS’s gravest error came on the night of June 1, 1999, according to Justice Department documents, when Reséndiz was detained entering the U.S. in the desert near the Santa Theresa border crossing in New Mexico.

Reséndiz provided an unused alias and a different date of birth, and with authorities unaware there was a warrant for his arrest in connection with several murders, Reséndiz was voluntarily returned to Mexico the following day. Two days later, the Railroad Killer reentered Texas — and savagely committed four more murders over the course of just 12 days.

On June 4, Reséndiz killed two people in one day, sexually assaulting Houston school teacher Noemi Dominguez, before murdering her with a pickax. In her stolen car, Reséndiz traveled to Schulenberg, Texas, around four miles from Weimar, and the previous Sirnic killings. In Shulenburg, he used that same pickax to kill 73-year-old Josephine Konvicka, leaving the weapon embedded in Konvicka’s head.

Moving north, Reséndiz next invaded the home of 80-year-old George Morber, just 100 yards from a railroad track in Gorham, Illinois. The Railroad Killer shot Morber in the back of the head with a shotgun, before Morber’s 57-year-old daughter, Carolyn Frederick arrived. And Reséndiz didn’t spare Frederick, beating her to death, then sexually assaulting her afterward.

As dread escalated across communities easily reachable by train, Resendez was placed on the FBI’s 10 Most Wanted Fugitives list.

The Capture Of Ángel Maturino Reséndiz 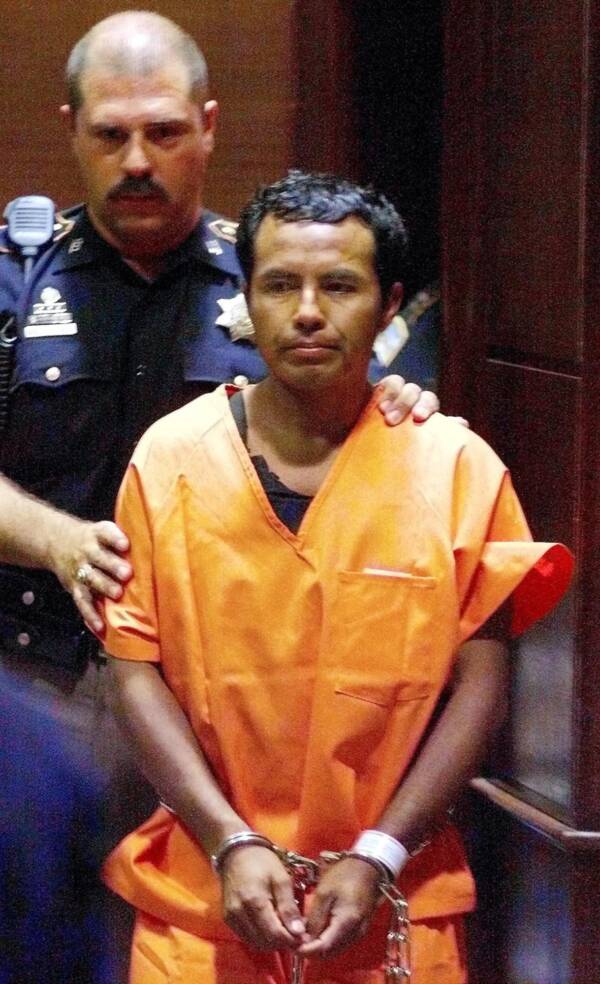 The FBI task force was stunned to find that Ángel Maturino Reséndiz had been rounded up and deported eight times in a mere 18 months — most unbelievably on June 2, 1999, when state and federal warrants were out and intensive efforts were underway to catch him.

Behind the scenes, Reséndiz’s sister worked with Texas Ranger Drew Carter by encouraging her brother to give himself up. She was later awarded $86,000 for aiding in his surrender, according to the Chicago Tribune.

Reséndiz was evaluated as mentally disturbed but not insane at trial, and on May 18, 2000, with survivor Holly Dunn having testified, was convicted for the capital murder of Claudia Benton. Having also confessed to eight other murders, Reséndiz was sentenced to death, following an automatic appeal.

On the day of his execution, he asked forgiveness from the family members of his victims in attendance, and from God, “for allowing the devil to deceive me.”

With his final words stating, “I deserve what I am getting,” the Railroad killer died by lethal injection on June 27, 2006.

After learning about the Railroad killer, read about slave-trading serial killer Patty Cannon. Then, delve into the mystery of the Chicago Strangler.