Throughout early 1800s Delaware and Maryland, Patty Cannon and her murderous gang kidnapped as many as 3,000 Black Americans to sell into bondage in the South. 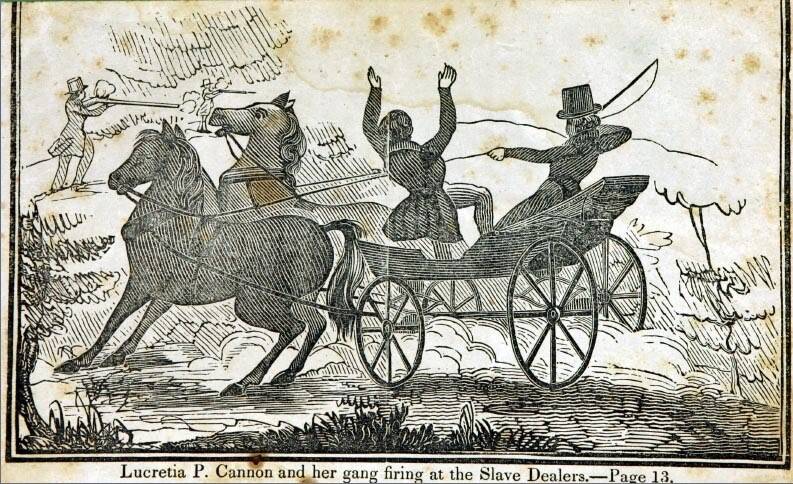 As a slave trader and murderer, Patty Cannon terrorized Black Americans in the early 19th century. Cannon and her gang — which included her own family members — committed unspeakable crimes, including selling, kidnapping, and murdering freed slaves.

Ultimately, Patty Cannon died in jail while awaiting trial for her crimes. Her notoriety, although seldom discussed, is the stuff of American infamy.

Who Was Patty Cannon?

Little is known about Cannon’s early life. Records indicate that Cannon was born either Martha or Lucretia Patricia Hanly around 1760. Throughout her life, Cannon remained secretive about her past. Some sources say she was actually born in Canada and moved to Delaware at age 16.

She married local farmer Jesse Cannon. They had two children and lived near the present-day town of Reliance, Maryland, close to the border of Delaware. Jesse Cannon died under mysterious circumstances, and it was later rumored that Patty had poisoned him to death.

Cannon reportedly worked as a barmaid and later as a prostitute, and she even made plans to open her own brothel. Cannon, who was known for her unpleasant demeanor, was not successful with this endeavor.

Due to her sour disposition, Cannon was having trouble attracting johns by the age of 24. With her dreams of becoming a madam crushed, she opened a tavern that would later become a central location for her criminal activities.

Cannon’s daughter married a man named Henry Brereton, who apparently introduced the Cannon family to a new type of crime. 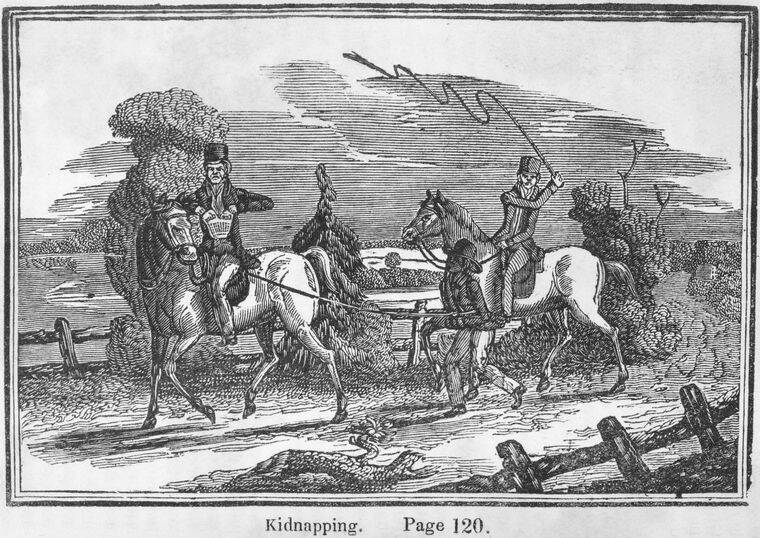 Wikimedia CommonsA common occurrence in the 19th century was the kidnapping of both free Black people and slaves to sell to new slave masters.

The illegal slave trade allowed women to take control of their own criminal enterprises and make their mark in an era when most of these fields were dominated by men.

According to historian Richard Bell, the illegal slave trade gave women the opportunity to “leverage familial relations with male conductors and station agents on this Reverse Underground Railroad in order to secure their own passage through an otherwise treacherous and decidedly homo-social world.”

In 1811, Brereton was arrested and began serving a prison sentence for kidnapping slaves. But that same year, he escaped from the jail in Georgetown, Delaware.

After his escape, Cannon, Griffith, and Brereton conspired to ambush the carriage of a patron at Cannon’s bar, a slave trader known only as Ridgell. Full of booze supplied by the bar, Ridgell was ambushed by Cannon and her cohorts. Ridgell later died of a gunshot wound from the fight.

Brereton and another associate named Joseph Griffith were captured for the murder and hanged around noon on April 13, 1813.

After Brereton’s death, Cannon’s daughter married again — this time to a man named Joe Johnson, who would become Cannon’s number one accomplice.

With Joe Johnson, Cannon’s gang continued its activities for several years. History has recorded various accounts of the horrors they inflicted.

When slavery was legal, the illegal slave trade was a booming part of the criminal underworld in the United States. Now known as The Reverse Underground Railroad, it involved the kidnapping of freed slaves, free African Americans, and escaped slaves in free border states.

Men, women, and children were all kidnapped as a part of the trade. They were then transported to Southern slave-holding states and sold to plantation owners and at slave auctions.

The illegal slave trade dates back to the 1780s and only ended after the Civil War in 1865. Cities like New York, Philadelphia, Cincinnati, and Louisville were hot spots for kidnappers. The proximity to rivers made these cities an ideal location for illegal slave trading via the waterways.

The Maryland and Delaware regions as well as Pennsylvania all had large populations of free African Americans and former slaves. Patty Cannon and her gang took advantage of this population boom and began their kidnapping ring.

The closeness to the southern states and the Mason-Dixon Line also added fuel to the fire that allowed the Cannon gang to commit its crimes. 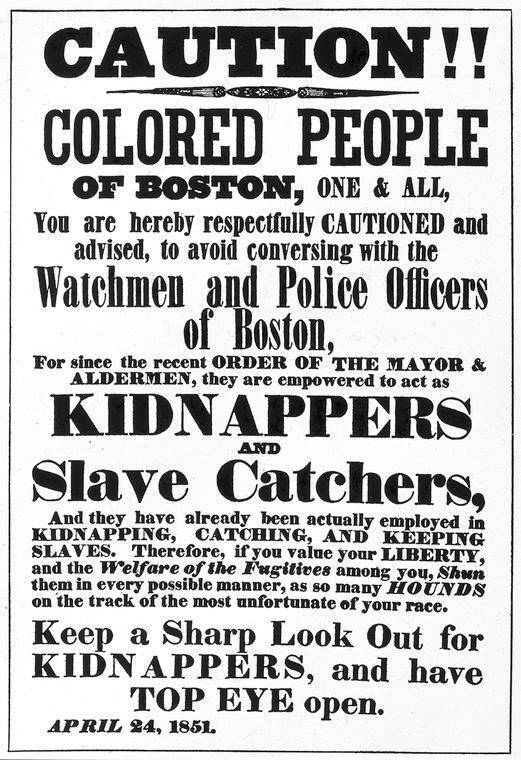 Wikimedia CommonsA poster in Boston warns of kidnappings happening in the city.

Along with the kidnapping of freed former slaves and African Americans, current slaves were also taken from one plantation to another in different states and sold. These illegal slave traders used several methods to lure their victims.

Often, direct threats of violence or physical harm were employed. But some kidnappers used bribery and offered money, alcohol, or the promise of work. Children were especially vulnerable, and kidnappers would lure them with candy. Slaves could be sold for up to $200 or $300 each, which would be several thousand dollars in today’s money.

In 1808, the U.S. Congress banned the importation of slaves. Article 1, Section 9 of the Constitution was supposed to limit the number of slaves in the country. But instead, it accidentally led to the underground slave trade.

Along with being responsible for the deaths of an unknown number of slaves, Cannon, Johnson, and other gang members were also believed to have murdered several wealthy guests at her tavern — often slave traders themselves — before stealing their money and horses.

The Cannon gang would shackle captives together in a chain gang and threaten them if they talked to strangers while being transported. Reports show that Cannon’s tavern contained hidden rooms built specially for holding captives, similar to the attic of horrors created by Delphine LaLaurie.

Cannon and her gang also easily slipped across state lines whenever it appeared that local police might be picking up on their trail. Their crimes went on for about 20 years.

Much written about the Cannon gang is believed to be exaggerated as some accounts of the gang differ. Some claim the gang had 50 to 60 members who were responsible for more than 3,000 kidnappings, committed 30 murders, and even had buried treasure.

In 1822, certain members of the Cannon gang were finally caught and tried for their crimes, including Joe Johnson. Johnson was the only one brought to court where he was charged with kidnapping. As punishment, he was given 39 lashes and placed in the pillory, or “the stocks.”

Johnson and his brother, Ebenezer, who was also a member of the gang, fled after his punishment to either Alabama or Mississippi.

In 1829, a tenant farmer working Cannon’s farmland discovered a blue chest filled with human bones, believed to be the remains of a slave trader who’d gone missing in 1820. After this discovery, a key witness against the Cannon gang was caught and questioned.

Cyrus James, a mixed-race slave who had been purchased by Cannon when he was 7 years old, was often used as a decoy to lure others into being kidnapped. It was his testimony that finally landed Cannon in jail. 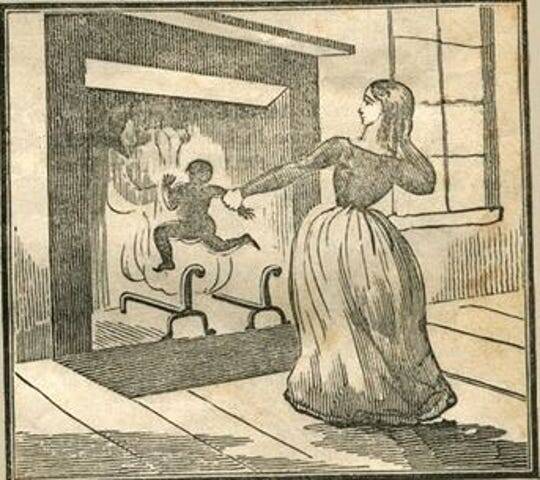 James, who was wanted by authorities for his involvement in the gang, was captured in Delaware in 1829. There, he turned on Patty Cannon and confessed his own involvement.

James told authorities about several bodies buried on Cannon’s property and that she had murdered a child. Cyrus recalled the child was injured and crying. According to James, Cannon took “a Black child not yet dead out in her apron, but that it never returned.”

James took authorities to Cannon’s property. There, they found the remains of three children.

Cannon was arrested in April 1829 and convicted of four counts of murder. A few weeks later, on May 11, 1829, Cannon was found dead in her cell of a suspected suicide by poison, around three weeks before her scheduled hanging. It is believed she was 70 years old at the time of her death.

She was buried outside of the Sussex County courthouse in Delaware. Her remains were moved in 1907. A courthouse employee took her skull and it later became a family heirloom.

In 1961, a skull purported to be Cannon’s was donated to the Dover Library, but it is now on a long-term loan to the Smithsonian Institute in Washington, D.C.

Today, Patty Cannon represents just one example of the many horrors that arose from the slave trade in America. Centuries later, her story remains just as terrifying.

After learning about Patty Cannon, check out 23 of history’s most ruthless female serial killers. Then read about Matilda McCrear, the last survivor of the transatlantic slave trade.