George Lucas may have directed the famed Star Wars series, but the true vision came from the mind of Ralph McQuarrie.

Images like this of the droids in the desert of Tatooine are instantly recognizable from the film.

With the seventh film in the Star Wars saga growing ever closer, buzz continues to grow. Rumors have swirled about that J.J. Abrams has gone back to the original concept art for his own inspiration, and as a result interest in the artist behind them is renewed. 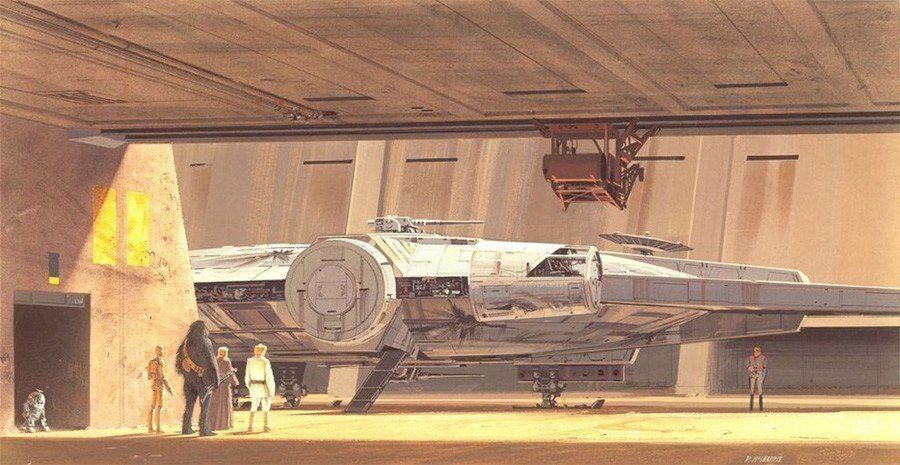 Ralph McQuarrie, the man behind the creation of Star Wars’ iconic look, has inspired generations of kids as well as other artists. Even after his death in 2012, his influence is undeniable.

When George Lucas came to McQuarrie in 1975 and asked him to illustrate several of the scenes from the original script, McQuarrie’s drawings led directly to the visual design of many of the series’ main characters, including C-3PO, R2-D2, Chewbacca, and the most iconic villain of all time, Darth Vader.

When asked about his work on the paintings, McQuarrie said, “I didn’t think the film would get made. My impression was it was too expensive.”

It was Ralph McQuarrie’s concept paintings that directly convinced 20th Century Fox to fund George Lucas’ sci-fi opus. The films that defined an entire generation may not exist today if it weren’t for these paintings and this man. 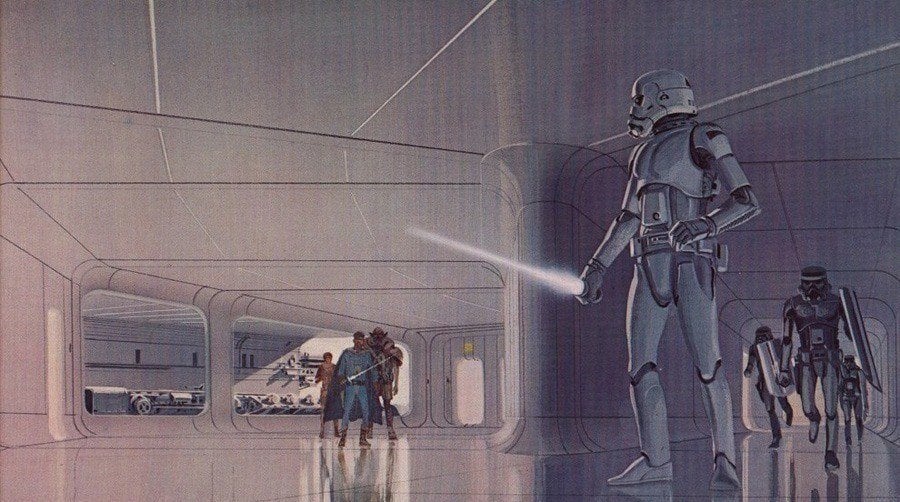 Of course, not every imagination from the concept paintings would make it to the final films. 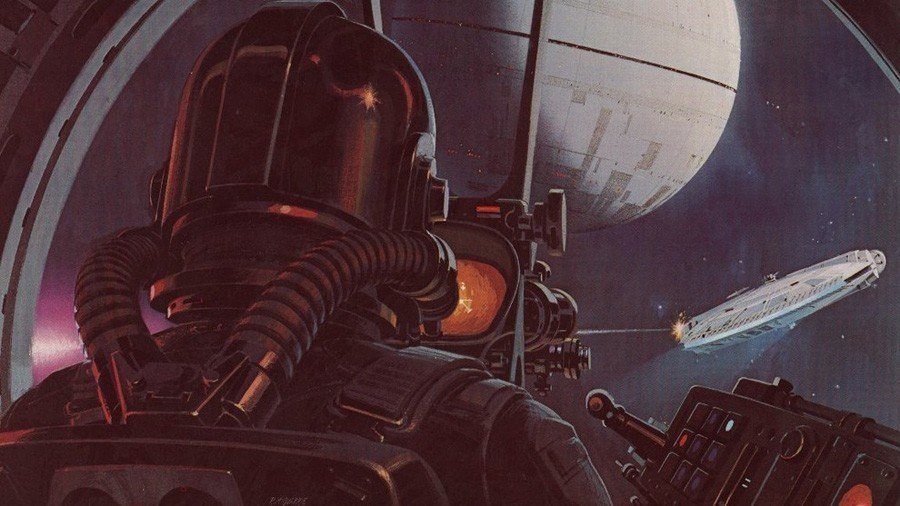 A TIE Fighter pilot takes aim at the rebels in the Millennium Falcon as it heads toward the Death Star. 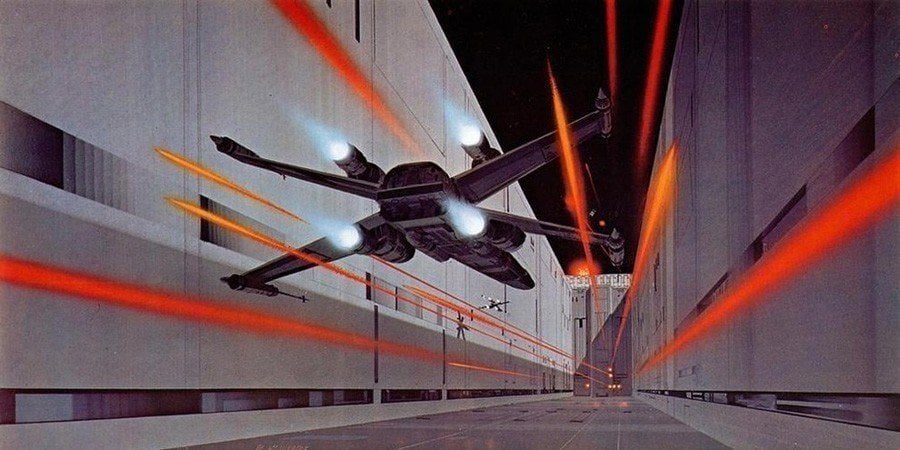 As with the characters, many of the designs of both ships and locations were modeled directly from McQuarrie’s imaginings. 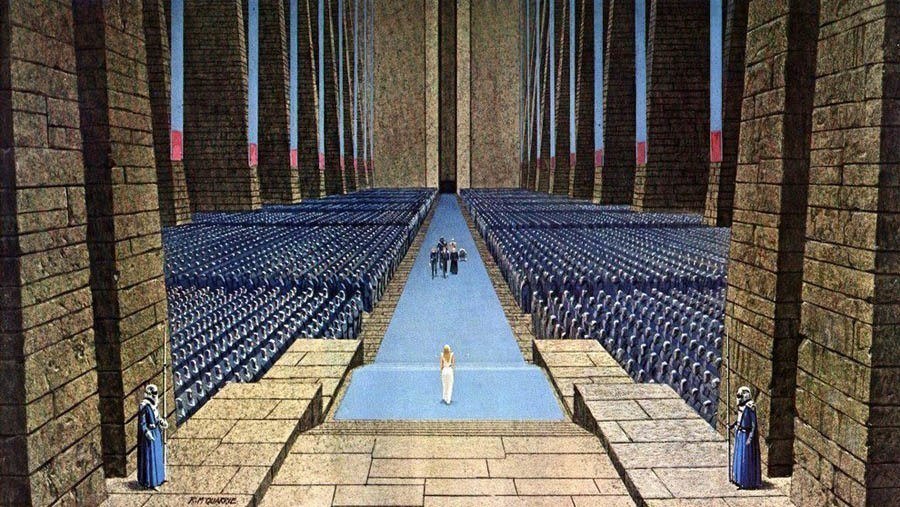 The grandiose locations and sets helped make the original trilogy the epic masterpiece which helped define a generation.

The creatures designed by Lucas and McQuarrie are unique and lifelike; the worlds created and the beings within the series made it easy for audiences to suspend their disbelief and be carried away into the story.

McQuarrie on the expansive and incredible scenes in his paintings: “Since when I started it wasn’t clear that the film would be made I didn’t have to limit myself.”

Darth Vader has a light saber battle with an unknown foe. “The way that he illustrated them was an influence on those characters; how they acted.” – George Lucas

The paintings were able to give the sense of true motion; you feel pulled into the action that would later take place on screen. 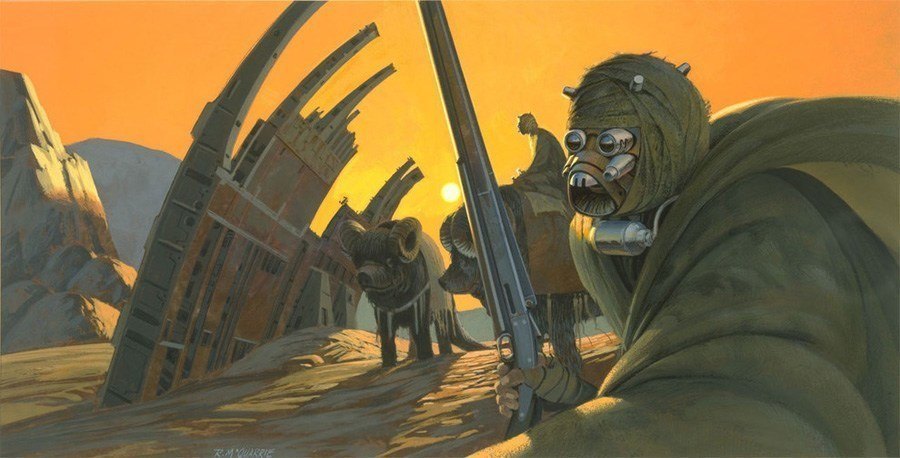 With the vast array of alien species that George Lucas required, Ralph McQuarrie had to have an imagination equal to that of the director in order to capture the vision.

Not only did Ralph McQuarrie do the concept art for the Star Wars trilogy, he was also responsible for concept paintings for the original Battlestar Galactica TV series, E.T. the Extra-Terrestrial, and Cocoon, for which he won an Academy Award. 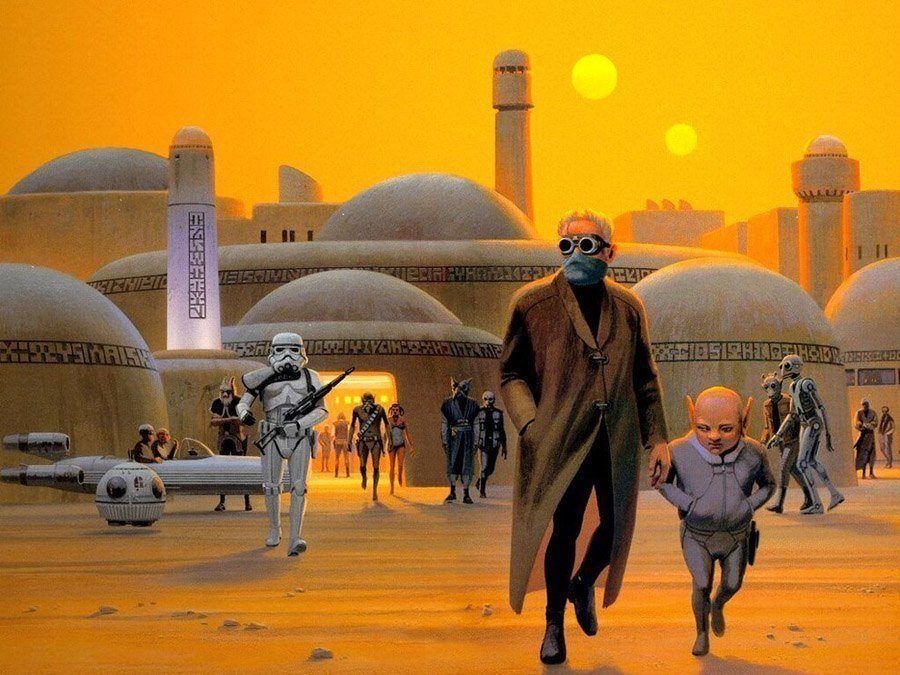 “I just did my best to depict how I thought the film should look, I really liked the idea.” – Ralph McQuarrie

“I thought there wouldn’t be enough of an audience. It’s too complicated, but George knew a lot of things that I didn’t know.” ~Ralph McQuarrie

“When words could not convey my ideas, I could always point to one of Ralph’s illustrations and say ‘Do it like this’.” – George Lucas

“It’s really a testament to how important he was that there’s such a connection between a lot of those iconic images and the movie scenes.” – George Lucas

Concept art of the inside of Jabba’s Barge for Return of the Jedi.

“It was a special opportunity to start from the ground up being able to create new characters, vehicles and worlds.” – Ralph McQuarrie

Luke’s snow speeder flies above the AT-AT Walker in the battle for Hoth. 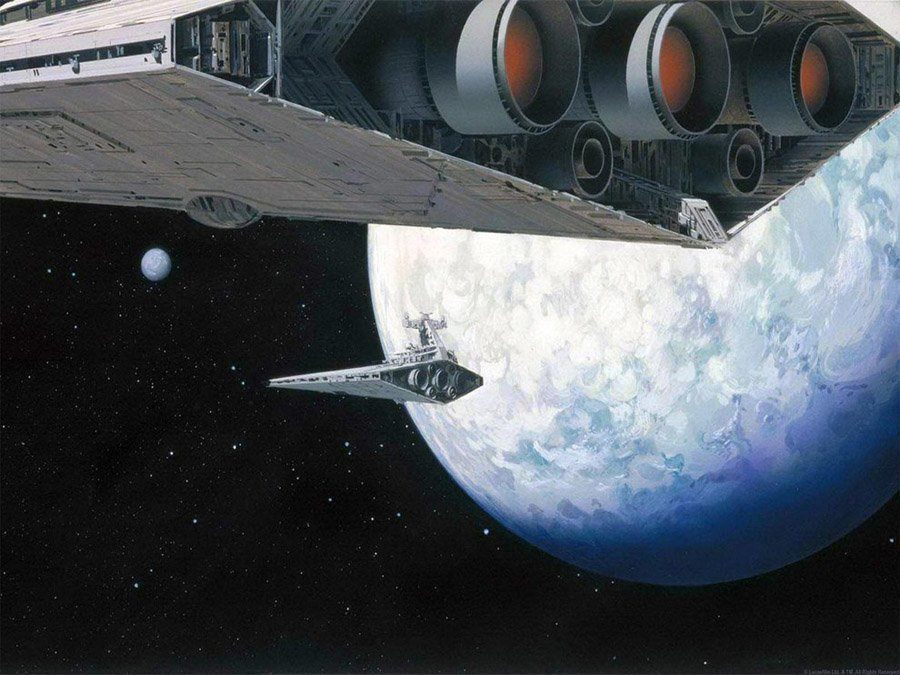 Luke and Darth Vader fight shortly before it is revealed that the latter is the former’s father.