Modern Day Exorcisms, Proof That Fear Is Not Confined To Cinema

Exorcisms are on the rise. Not confined to the fictional realities of horror films, the Pope has confirmed that there are exorcists who work for the Catholic Church, and Reverend Bob Larson has turned his daughter into a reality TV star with perfect hair and impeccable cross-wielding skills. 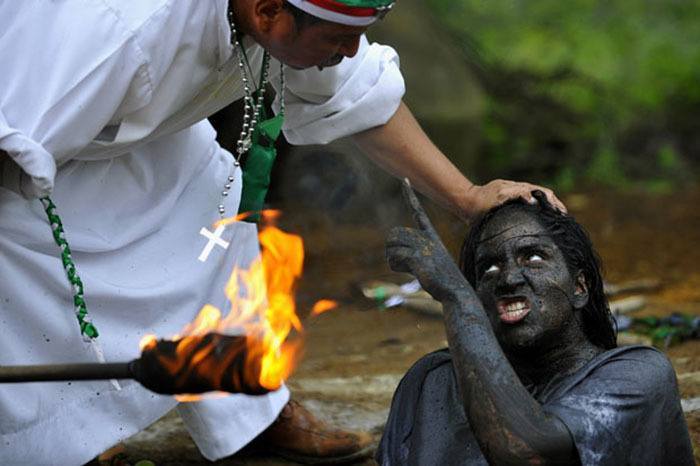 Brother Hermes Cifuentes practices his exorcisms in La Cumbre, Valle, Colombia. He follows the Rite of Exorcism that was handed down to him by his father, whom he also credits with giving him the strength to face demons. Source: Info Wars 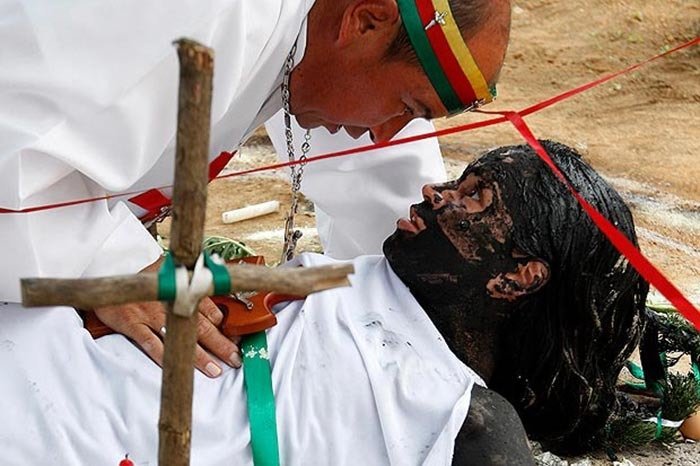 : Brother Hermes employs different exorcism tools than the Catholic Church, which claims he is a sorcerer or warlock. He covers the afflicted in mud, blindfolds them, and binds their hands to eggs and crosses. Though his techniques may not follow Catholic Church practice, his business is booming. He states that he has completed over 15,000 exorcisms in his life, an average of ten a week. Source: Info Wars 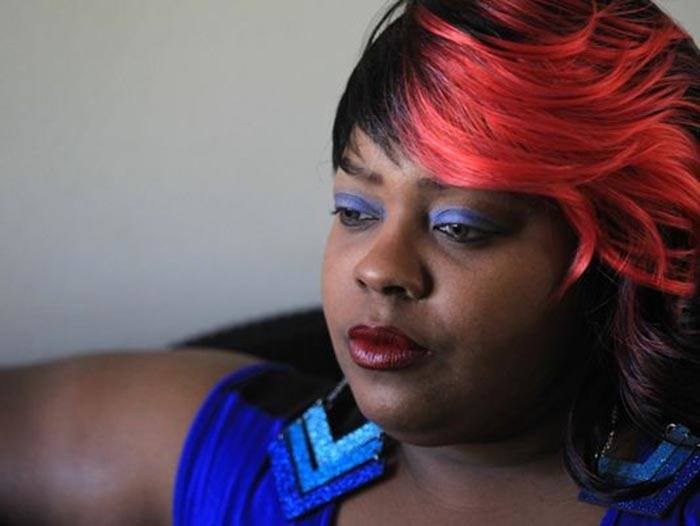 Latoya Ammons and her children were tormented by knocks, disembodied voices and spirit figures in their Gary, Indiana home. Police and Child Protective Services were called in out of concern for the safety of Ammons’ children. Source: USA Today 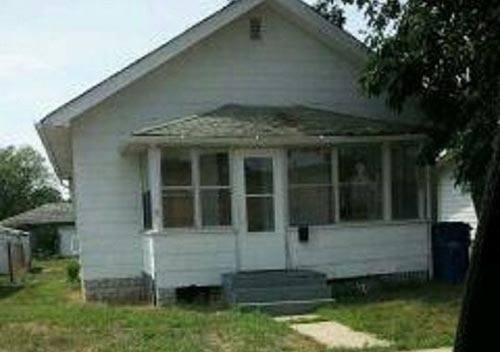 Police and social workers witnessed unexplained phenomena, including voices and levitation. Reverend Michael Maginot of St Stephen, Martyr Parish, would perform four exorcisms on Ammons and one of her sons. They showed signs of improvement, but the home remained “haunted” and the family moved. Source: USA Today 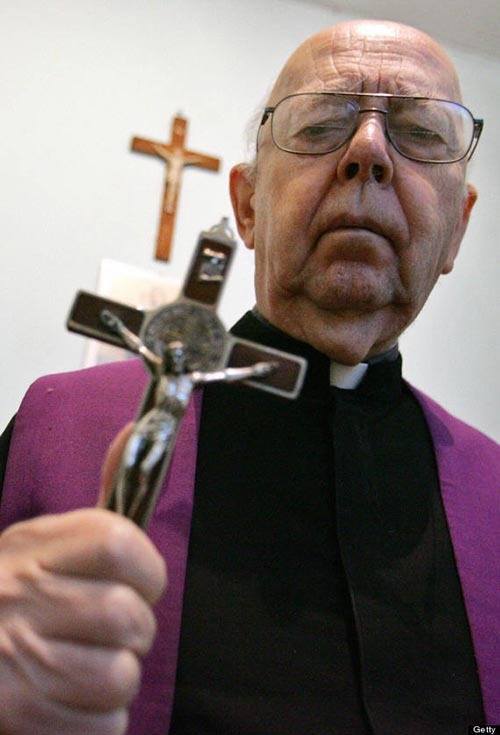 Father Gabriele Amorth is an Italian priest and exorcist of the Diocese of Rome who claims to have dispelled over 70,000 demons in his career. This number is disputed, as the Catholic Church requires an investigation prior to the Rite of Exorcism. Source: The Huffington Post 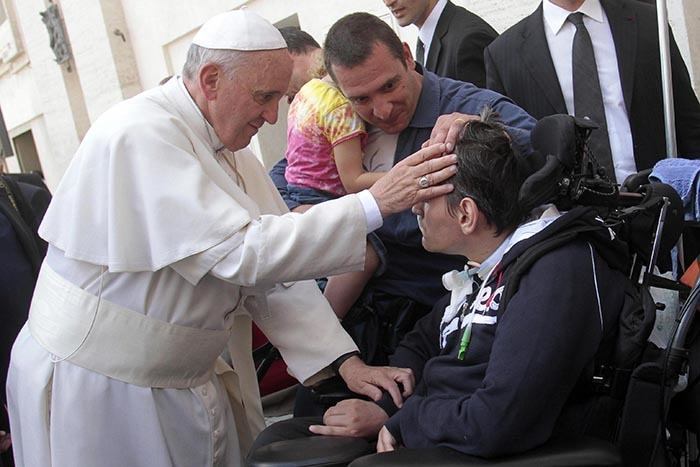 Some witnesses claim to have seen the Pope give an impromptu exorcism on an ill man in St. Peter’s Square. At an exorcism conference this year, Pope Francis encouraged priests to help those possessed by demons and warned the clergy that Satanism and the occult are on the rise. Source: Life In Italy 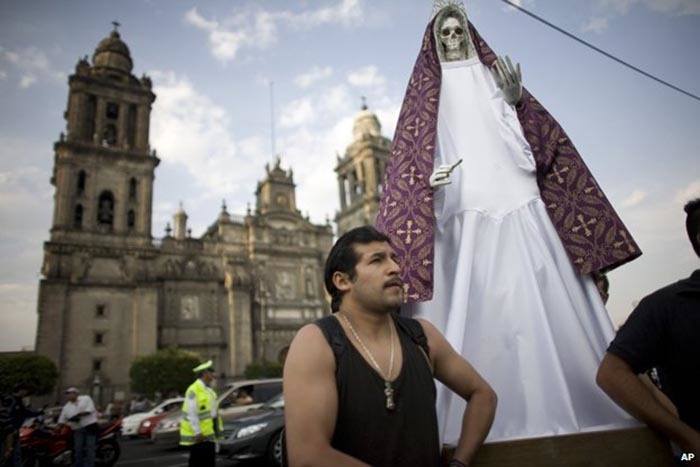 Mexico is an extremely Catholic nation and priests have seen an increase in request for exorcisms, which they believe to be related to the rise of the veneration of Santa Muerte. Cartels often invoke the folk saint Santa Muerte or Holy Death, as she oversees safe transport after death. Source: BBC 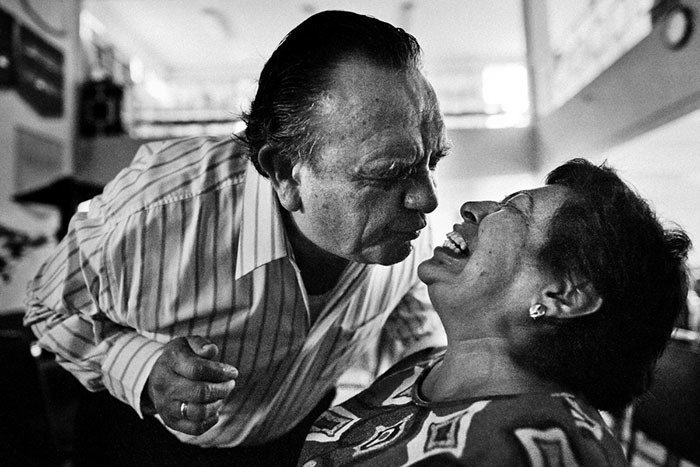 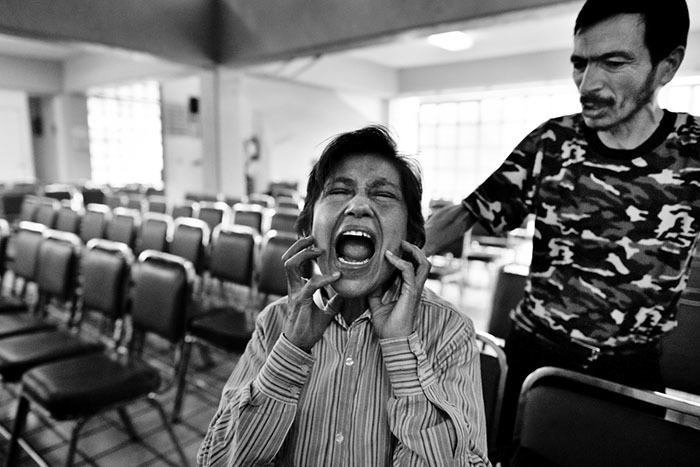 Many feel overwhelmed by evil due to the violence accompanying the drug trade. Even cartel members are seeking salvation from priests. Pastors at the Church of the Divine Saviour outside of Mexico City administer exorcisms in this photo. Source: Huffington Post 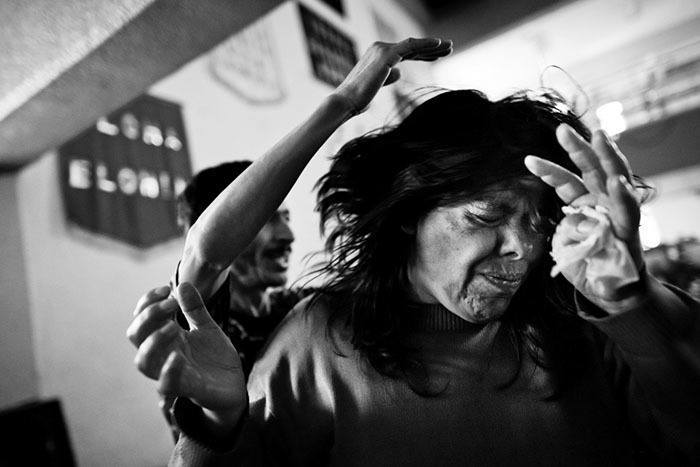 Often, the afflicted need blessing and liberation prayers, according to priests. Adherers to Catholic doctrine believe that liberation prayers can remove the demons that surrounding people and influence their decisions. Source: Huffington Post 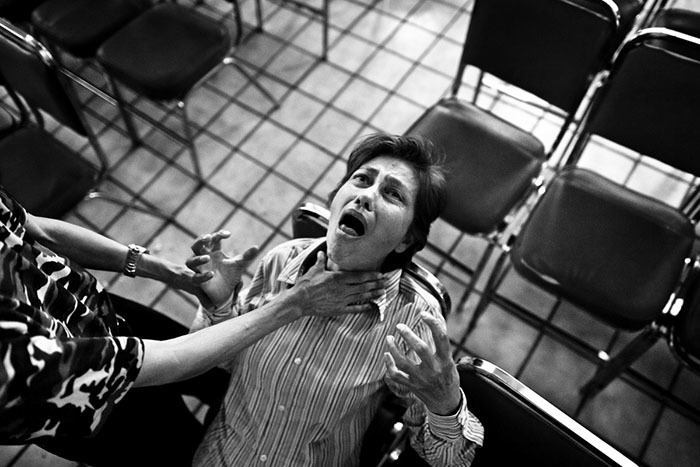 Symptoms of possession include speaking in tongues, tremors, convulsions, vomiting and eating inedible objects. Knowledge of the unknown is another giveaway, along with speaking in a language that is either long dead or one hasn’t studied. Source: Huffington Post 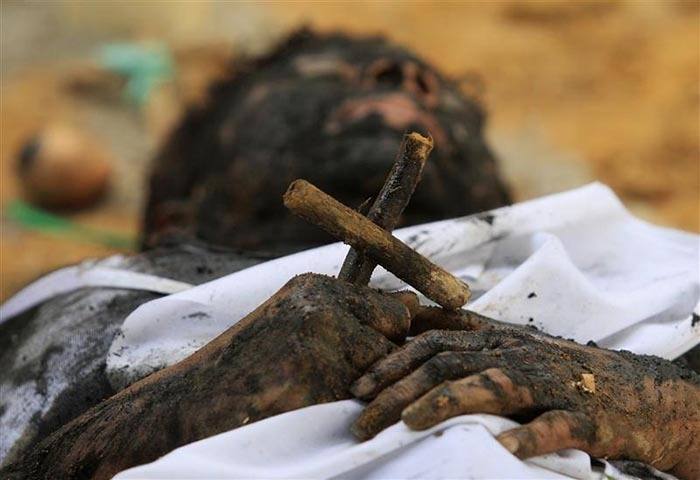 The Catholic Church revised the Rite of Exorcism in 1999. The ritual assumes that the victim maintains their free will, though a demon could maintain control of the person physically. Source: Reuters 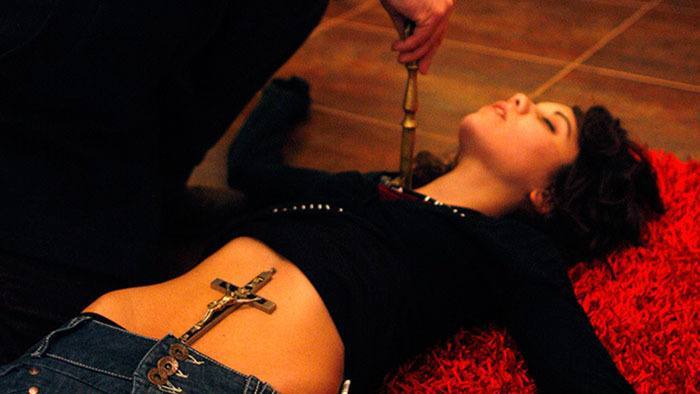 While Catholic priests are told not to enter into exorcisms without first ensuring that the afflicted has been under medical care, not all exorcists follow this caveat. Source: RT 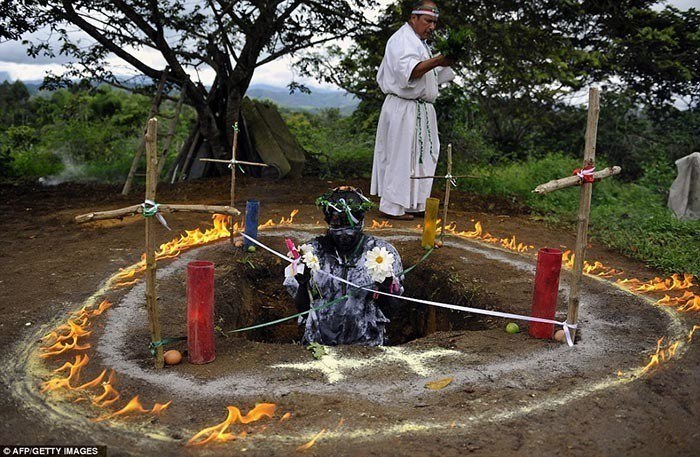 Exorcism is prevalent in other Christian denominations, including Pentecostalism, Lutheranism and Eastern Orthodoxy, along with the syncretized beliefs of Voudou, Santeria and Candomble. Source: Daily Mail 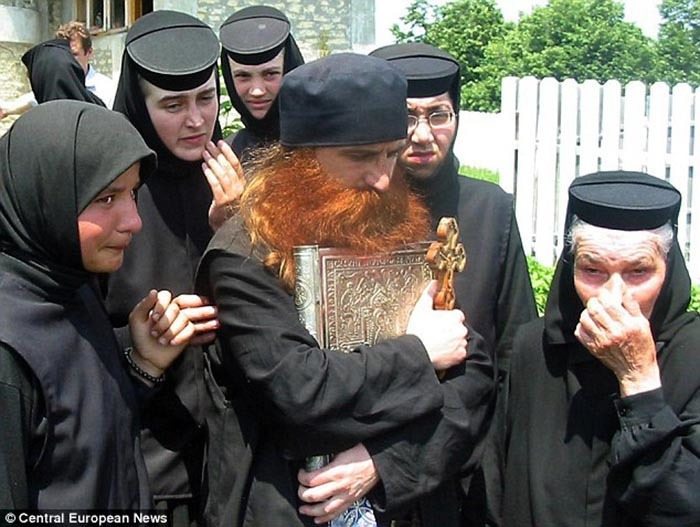 In 2005, a Romanian Orthodox Priest and four nuns were arrested in connection with the death of a fellow nun who appeared to be suffering from possession, but in reality suffered from schizophrenia. Source: Daily Mail 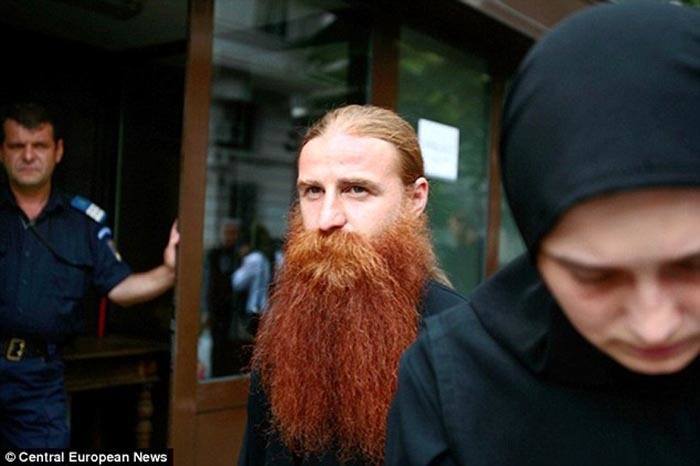 The afflicted nun was tied up, crucified and had her mouth taped shut. Father Corogeanu, pictured here, called an ambulance when she became unresponsive. She was administered adrenaline and died. The priest and nuns served time in prison for their involvement in her death. Source: Daily Mail 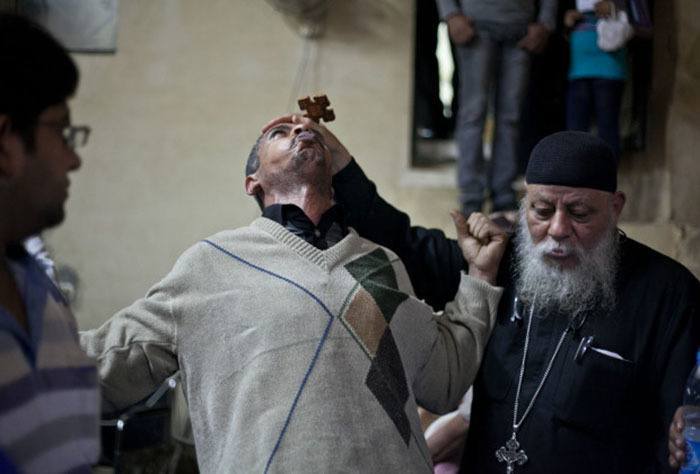 The largest church in the Middle East is the St. Sama’an Cathedral carved into Mokattam Mountain in Cairo. Father Sama’an, a Coptic Christian priest, leads the church and administers exorcisms in a manner akin to Evangelical Protestantism. Source: Vocativ 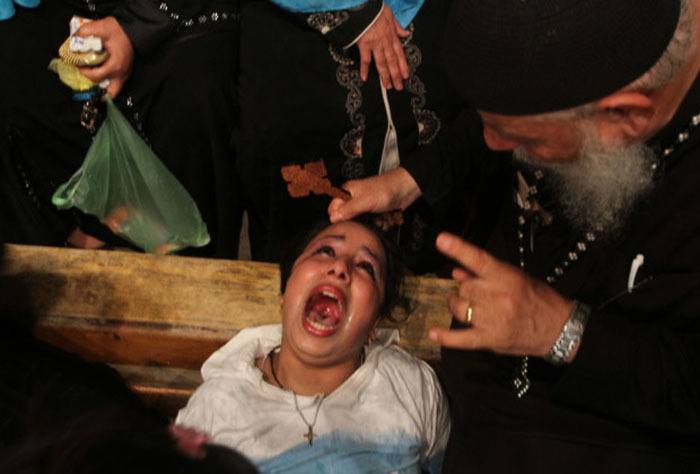 Many of the church’s visitors are Muslims who have attempted—without success--to find relief through Islamic exorcisms. The Church sits in a predominately Christian slum of Garbage City. Source: Vocativ 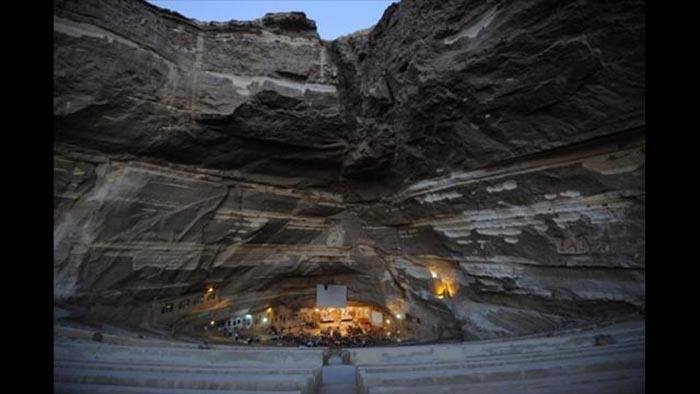 Father Sama’an performs 30 to 50 exorcisms a week, mostly focused around sexual or psychological issues. He also claims to have raised four people from the dead, which has been supported by witnesses. Source: 13 WMAZ 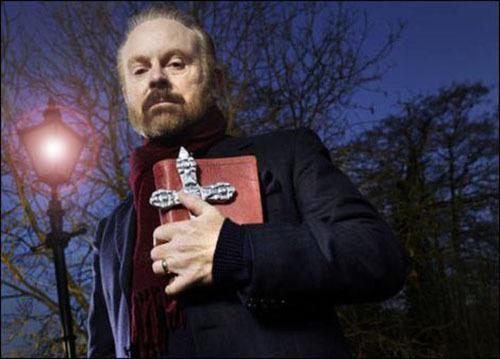 Revered Bob Larson is a radio and TV evangelist famous for his practice of exorcising demons. His career began with his debates and confrontations of Satanists and occultists during the Satanic Panic of the 1980s and 90s. Source: VICE 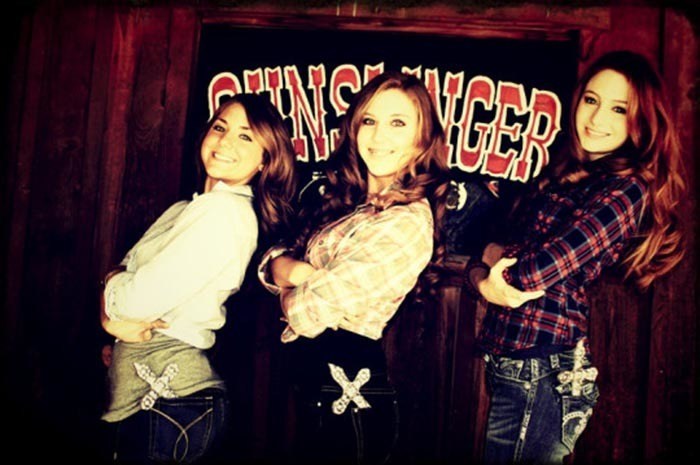 Rev. Larson even has his own teenage squad of demon hunters, which includes his daughter. They travel with Rev. Larson, delivering believers from evil. If you can’t make it to one of his sermons, for a donation of $295, Rev. Larson will even give you an exorcism via Skype. Source: Teenage Exorcists 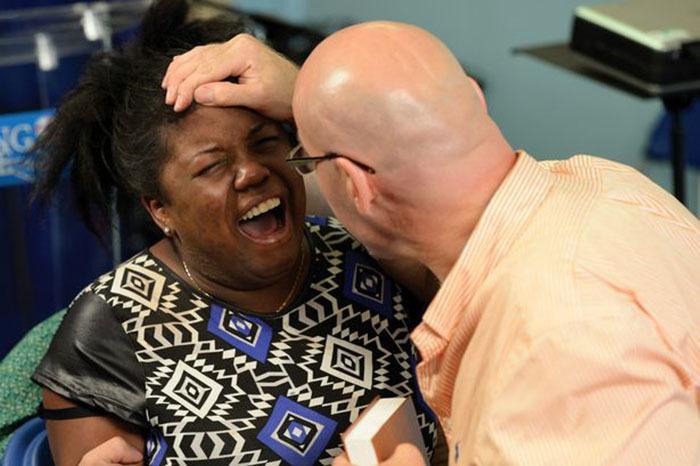 Other evangelists have also taken up the fight against evil. Here, a pregnant woman is exorcised at the Amazing Grace Church in East London. Pastor Vincent ten Bowhuis believes the UK is filled with demons. Source: The Mirror 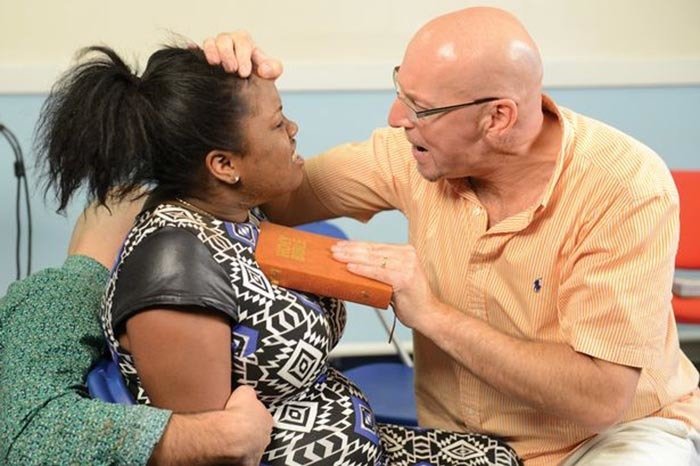 Pastor Bowhuis runs an online school that provides classes to teach others how to combat demons. Exorcisms at his church are free to congregation members, but non-members must pay £250 to be saved. Source: The Mirror 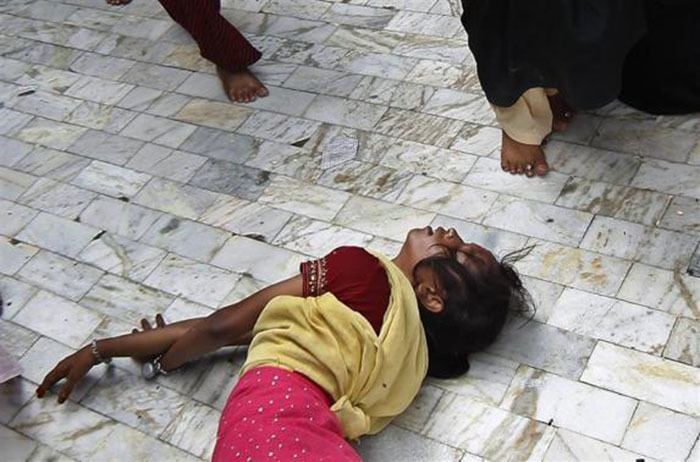 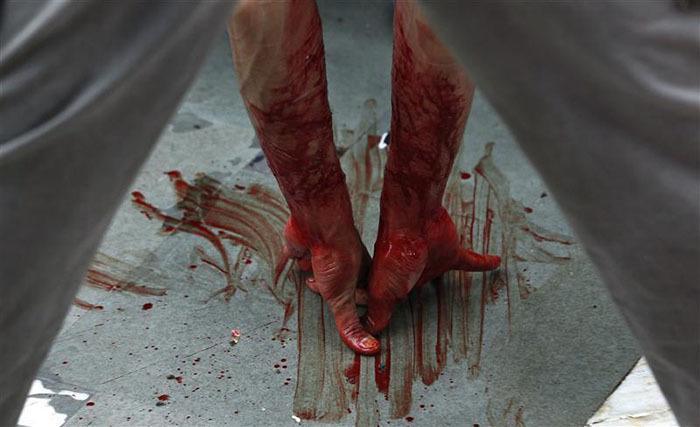 Self-flagellation is often used as a penance and purification from evil. Supported by the early Christian church and by Shi’ite Muslims, it is now fairly uncommon, though still practiced in parts of Mexico, the Philippines, India, Iraq and Pakistan. Source: Reuters 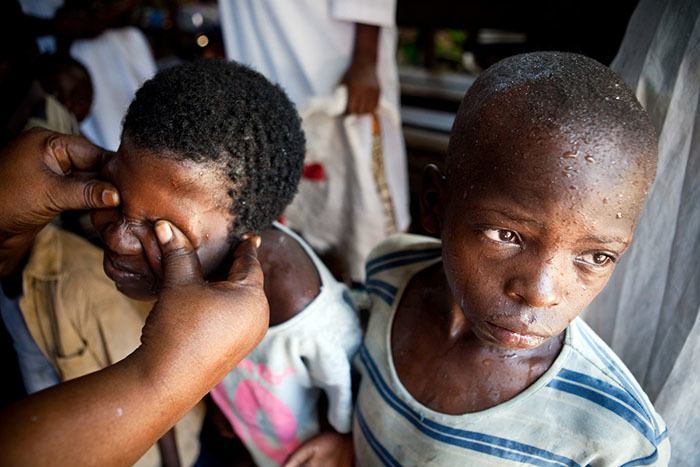 Two boys are cleansed in a ritual to rid them of the influences of witchcraft in Kinshasa. A belief in spirits can be found in almost all of the world’s cultures. Source: Huffington Post 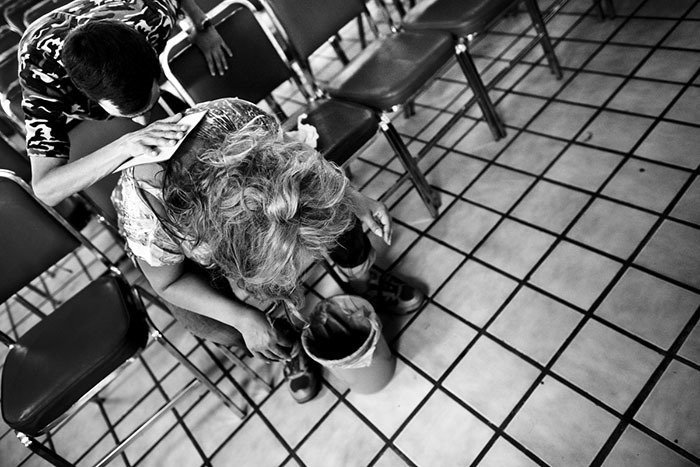 If these spirits take over, to some the only option is exorcism. Whether or not you have faith in the rite, the evidence is compelling that much of humanity craves peace from whatever haunts them. Source: Huffington Post

Listen above to the History Uncovered podcast, episode 27: The Exorcism Of Anneliese Michel, also available on iTunes and Spotify.

Next, discover the chilling true tale of the Anneliese Michel exorcism.