Truck driver Reginald Denny nearly died from a random attack during one of the most violent uprisings in Los Angeles' history — but good Samaritans saved him.

On April 29, 1992, 39-year-old construction worker Reginald Denny was driving through Los Angeles, unaware of the angry uprising brewing in the streets in response to the verdict in the Rodney King case. He unknowingly drove into the heart of the unrest, and his truck was suddenly attacked by an angry mob.

As a news helicopter hovered overhead, Denny was pulled from his truck and beaten within an inch of his life. His assault aired on live television, but police refused to enter the fray to save him. Instead, Denny only survived because four strangers came to his aid.

Though his horrifying ordeal became emblematic of the violent side of the 1992 uprising — and despite the fact that he nearly died — Denny was able to forgive his attackers and make peace with his part in a tumultuous, unforgettable five days of unrest in Los Angeles.

Who Was Reginald Denny? 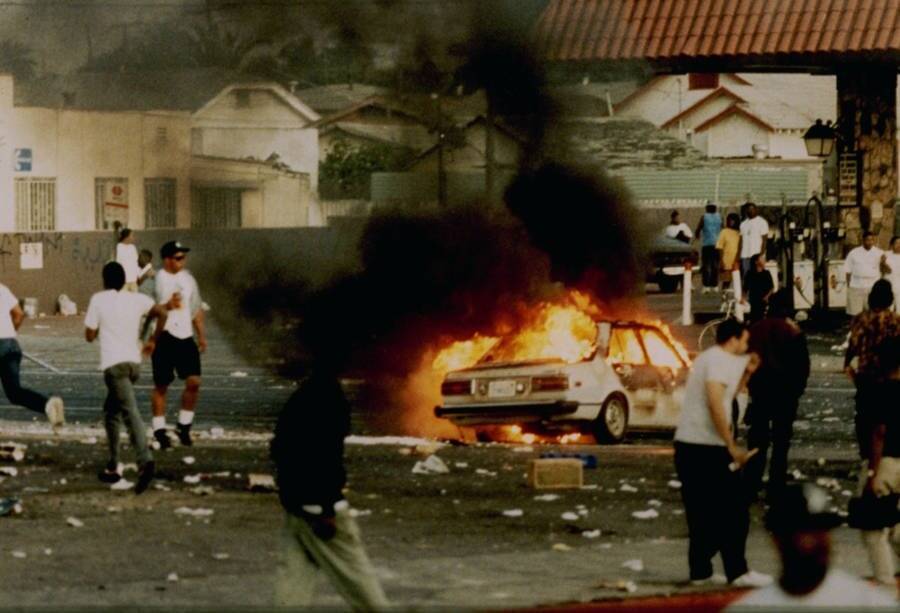 Getty Images
Outrage from the unjust results of the Rodney King trial boiled over onto the streets of South-Central LA.

Reginald Denny was born in 1953. When he was 33, he became a construction worker employed with Transit Mixed Concrete and lived a quiet life in Los Angeles. Those who knew Denny described him as a good-natured person.

“He’s a really nice guy, the kind of guy you meet and you always remember because he’s just so nice,” said his roommate Don Kelley. But Denny’s ordinary life was turned upside down in 1992.

On April 29, Reginald Denny was out driving one of the company’s 18-wheeler trucks on his regular delivery route in the city. Little did he know that earlier in the day, violence had overtaken the streets of South-Central Los Angeles.

Angry residents took to the streets in protest over the acquittal of the white police officers who were caught on video beating an unarmed Black man named Rodney King. 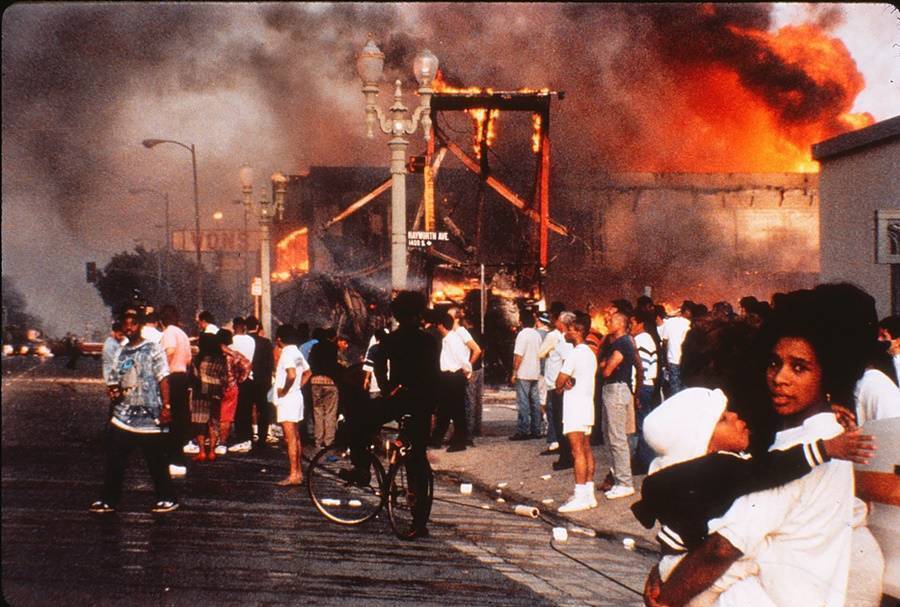 The incident happened after King committed a traffic violation and led police on a brief car chase. The gruesome, grainy video of the beating elicited backlash against the LAPD’s notoriously brutal and racist record.

None of the police officers involved in the incident were convicted, and in response, violence broke out on the city’s streets. People looted stores in South-Central LA, with some setting fire to storefronts. Terrified residents called 911, but received no help from authorities.

Instead, police officers retreated from the chaos, allowing the LA riots to go unchecked. Denny, who is white, suddenly found himself entering the eye of the storm as he cruised down Normandie Avenue.

It took mere seconds before the scene on the streets in front of his truck turned ugly — and nearly robbed him of his life.

A Televised Beating Shocks The Country

A news crew in a helicopter caught the tail end of Reginald Denny’s beating during the LA riots.

Things took a turn for the worst when Reginald Denny’s truck arrived at the intersection of Normandie Avenue and Florence Avenue on the first day of the LA uprising.

During an interview on Good Morning America, Denny said his truck had become stuck at the intersection due to the crowd that had congregated in the streets.

An angry mob descended on Denny’s truck, blocking him from passing through. Despite the danger of the situation, he refused to force his truck through the crowds for fear of injuring pedestrians.

Amid the sound of bottles breaking against the ground, tires screeching, and people screaming around him, Denny saw someone break the right-side window of his truck. That’s when he knew the situation was about to get worse. 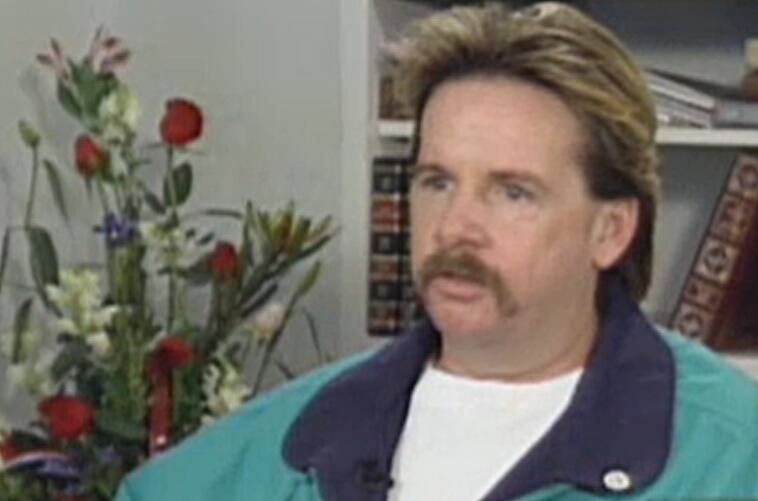 YouTubeDoctors prohibited Reginald Denny (pictured) from driving commercially after his attack due to his ongoing treatment.

In a split second, another person climbed onto the left side of the truck, right next to the driver’s seat where Denny was struggling to maintain control of his vehicle. The person smashed through the window with a crowbar, hitting the left side of Denny’s face.

The scene quickly escalated into one of the most violent incidents of the LA uprising. Members of the group that attacked Denny’s truck gained access to the inside of his vehicle. Denny, still dazed from the chaos around him, was pulled onto the ground and brutally beaten.

A news helicopter flying above the horrific ordeal captured footage of the incident.

“Okay, he’s moving,” described the reporter as the camera captured Denny lying face-up next to his truck. “A lot of blood gushing from the man’s head…nobody’s helping him.” The reporter described the scene as an “attempted murder,” adding that the police were unwilling to enter the area of unrest. 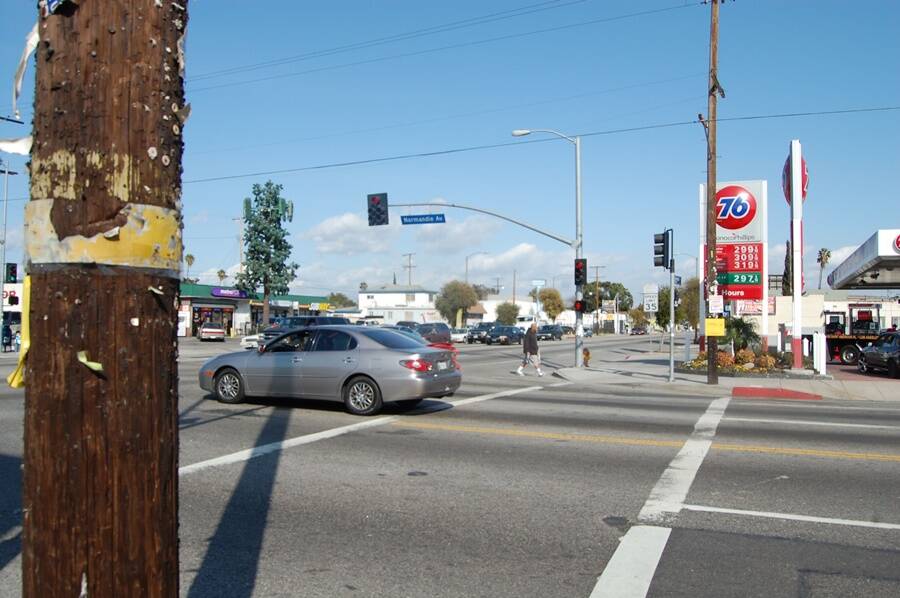 Wikimedia CommonsThe intersection of Florence Ave and Normandie Ave where Denny was attacked.

The footage of Reginald Denny lying unaided in a pool of his own blood became one of the defining images of the 1992 LA uprising. Fortunately for Denny, the live reportage of his attack meant that many people saw that his life was in jeopardy, and four nearby residents came to his aid.

They were 29-year-old trucker Bobby Green, Lei Yuille, and an African American couple, T.J. Murphy and Terri Barnett. None of the rescuers knew Denny personally, but they all rushed to the scene to help.

The civilian rescuers managed to drive Denny to Daniel Freeman Hospital to seek treatment for his severe injuries. 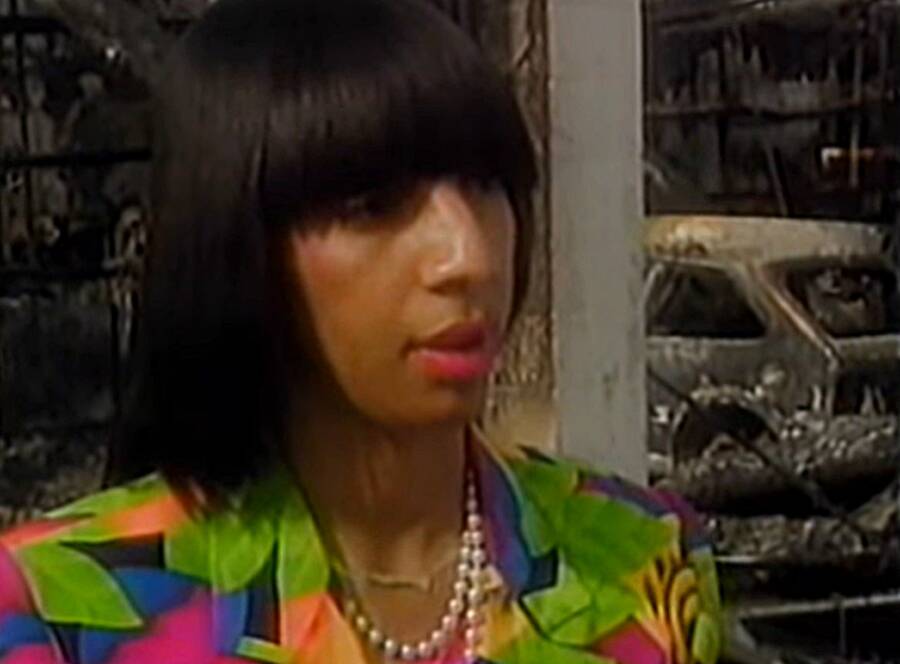 At the hospital, doctors found that Reginald Denny’s skull had been fractured in 91 places, damaging his brain. He remained unconscious for five days.

When he awoke, he couldn’t remember why he was in the hospital. A year later, he was still recovering from the brutal incident. But while he was hospitalized, Denny received 27,000 get well cards from people who had seen him on the news. In a 2002 interview, he said he had kept every single one.

“Those people didn’t even know him and risked their lives to aid him,” Kelley told the Los Angeles Times of Denny’s rescuers. “If no one had helped him, he would be dead.” After he gained most of his strength back, Denny was reunited with his rescuers.

“I couldn’t handle seeing her,” Denny said describing the overwhelming gratitude he felt during his first encounter with Barnett, one of the people who saved his life. “How do you thank somebody who saved [your] life?”

Denny was also careful to note that he doesn’t see himself as a white victim of so-called Black violence. “People seem to forget it was Black folks that saved my life,” he said.

At least two men were convicted on charges related to the brutal attack on Reginald Denny.

One of them was Henry “Kiki” Watson, a longtime resident of LA and a former marine who spent six months in jail on minor offense charges after the attack. In 1993, Denny and Watson appeared together on The Phil Donahue Show where they made amends and shook hands.

Watson, who was 27 at the time of the attack, apologized to Denny “for my participation in the injuries you suffered,” though later he admitted to the press that he didn’t regret his behavior during the violent uprising.

Watson cited the uncurbed police violence that continued against Black people across the country long after the LA uprising.

Terri Barnett and T.J. Murphy were among four residents who rushed to help the bloodied man on the street.

Reginald Denny moved to Arizona to escape the attention surrounding his public ordeal. Despite the injuries he suffered from his brutal beating in 1992, he understood that the underlying social issues of racism and oppression against minority residents that sparked the ugly incident was larger than him and his attackers.

“This is a civil war,” Denny said. “This is not me against Mr. Watson — it’s not a personal vendetta. The problems were happening before Mr. Watson and I were born.”

However, despite Denny’s views on his life-changing assault, in more recent years alt-right groups have co-opted his image and story. In 2016, a viral post featuring Denny’s beaten face encouraged motorists to run over Black Lives Matter protesters who blocked their path saying, “Don’t be like Reginald… if ‘protesters’ are blocking the road hit the GAS not the breaks[sic].”

Denny’s story resurfaced again on social media in 2020 following protests over the death of George Floyd in police custody. Again, his story was mentioned in posts encouraging drivers to hit protestors and insinuating that truckers are in particular danger of being beaten by “rioters.”

Though Reginald Denny himself hasn’t commented publicly on the Black Lives Matter movement, based on his words from the ’90s, it seems likely that he would not be too happy to see the way his ordeal is still being used to stoke fears of Black violence and reinforce division.

After learning about the brutal beating of Reginald Denny, take a look at photographs of the Watts Rebellion of 1965. Then, learn about the Detroit riots two years later.