From the Civil War Draft Riots of 1863 to the Crown Heights Riots of 1991, these riots in New York left indelible marks on the city's history.

Library of Congress; Bettmann/Contributor/Getty Images; John Roca/NY Daily News Archive via Getty ImagesScenes from some of the worst riots in New York City history, including (from left) the 1863 Draft Riots, the 1943 Harlem Riot, and the 1991 Crown Heights Riot.

New York City has a long history of riots. And going back as early as the Doctors’ Riot of 1788 — when the poor rebelled against doctors and medical students who had been stealing the corpses of the impoverished to use as cadavers — riots in New York have largely started in order to create social change.

“Riots and revolts are spectacular and so is protest,” said Donald Mitchell, co-editor of the book Revolting New York: How 400 Years Of Riot, Rebellion, Uprising, And Revolution Shaped A City. “They spark a great deal more in their aftermath – as well as a great deal of social reform.”

“Riots and other forms of uprising shape cities – both in the moment, through the destruction of property,” added Mitchell. “But also over the long haul and socially… reshaping the social and political order, transforming the political economy and more.”

Mitchell believes that riots occur when the pressures of inequality, oppression, and exploitation become so intense that the merest spark — or lightning flash, as Harlem Renaissance writer Alain Locke put it — can set things off.

“Frequently, that lightning flash is police or other elite violence. Sometimes it is more random, as with the 1977 Blackout.”

But no matter the cause, it sometimes seems that no matter where you walk in New York City, you are bound to pass a place that was once the scene of an infamous riot. That CVS on the corner just might have been the site where dozens of rioters were killed over food shortages two centuries ago.

With that in mind, discover some of the most devastating riots in New York City’s history — and what those locations look like now — below: 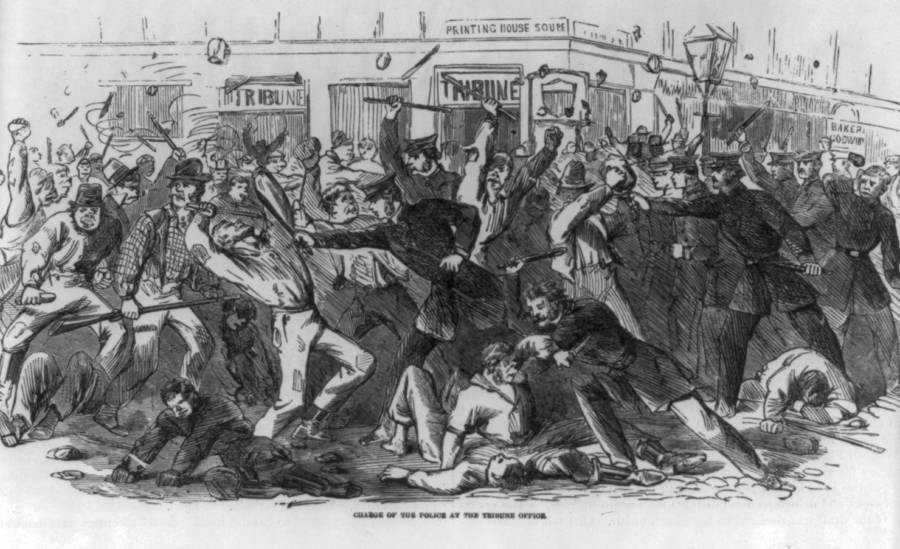 Library of CongressCharging the Tribune Building at Nassau and Spruce streets in Manhattan during the Draft Riots.

Harmon LeonFormer site of the Tribune Building, as seen today.

At the foot of the Brooklyn Bridge, a mere block from where tourists marvel at street performers while eating ice cream, is a site of one of the most brutal riots in New York City history.

In the midst of the Civil War, Congress passed a law stating that men 20-45 were eligible to be drafted into the military — with wealthier people being able to afford the fee that made them exempt. And in New York City, between July 13 and July 16, 1863, this caused a riot.

What started as civil unrest related to the draft law soon turned into a race riot in which white, largely Irish, rioters began attacking African-Americans throughout the city.

According to Mitchell, the Draft Riots, along with the Tenderloin Riot of 1900 “were attacks by whites – with a great deal of elite support – on the persons and bodies of black people in an effort to maintain the racist social order.”

During the four-day eruption, the rioters acted out against the wealthy who could afford to dodge the draft as well as the African-Americans who they felt were their competition for jobs. The mob beat, tortured, and killed numerous black people throughout the city, including one man who was lynched. When it was all over, some 120 people lay dead.