Botanist Robert Fortune was commissioned by the East India Trading Company to infiltrate China's tea industry and topple the country's monopoly on the beverage.

Second only to water, tea is the world’s most popular beverage. But the origin story of tea’s popularity doesn’t go down quite as easily as the drink itself.

Eager to meet the market demand both at home and abroad for tea, Britain sabotaged the virtual monopoly China held on tea, opening the beverage to the world, and destroying China’s economy in the process.

Indeed, the end to the tea empire China had established came when Britain launched a covert operation under a Scottish botanist, named Robert Fortune, to steal some 23,000 plants and seeds.

Tea As A Valuable Trade Commodity 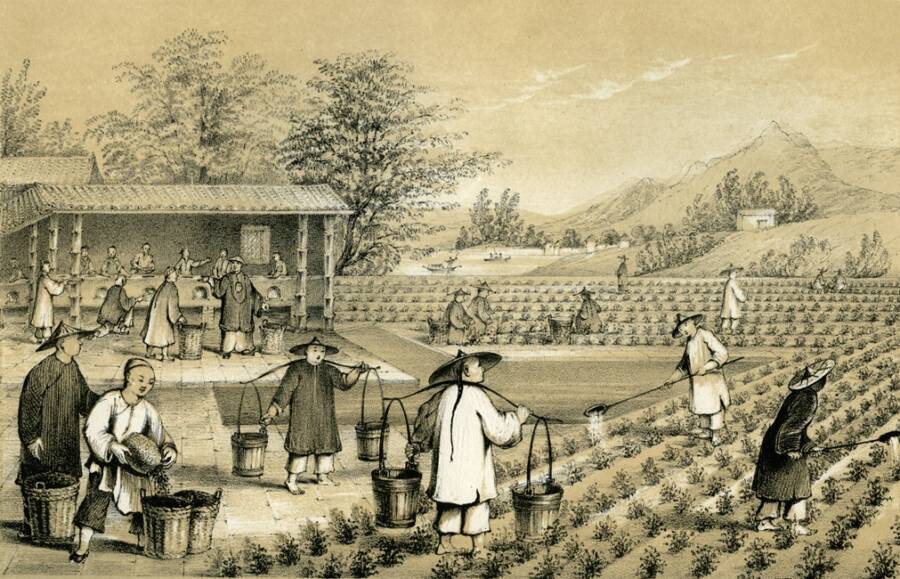 The Chinese had been drinking tea for 2,000 years when the beverage piqued the interest of Brits. The earliest written account of China’s tea culture is documented in the poem A Contract with A Servant by Wang Bao, written during the Western Han dynasty between 206 BC and 9 AD.

In its infancy, tea was considered medicinal. It wasn’t until around 300 A.D. that drinking tea for pleasure became a daily custom, and not until the late 700s when a Buddhist monk wrote of its potential benefits and how to prepare it.

Tea-tasting thus became associated with Buddhist practices and was a favorite past-time among China’s literati, often combined with wine-drinking and poetry and calligraphy-making during the Tang Dynasty.

By the 1600s, the Chinese had begun exporting their cultural staple to Europe. China was the only tea producer and manufacturer in the world at this time and produced large quantities of tea to fulfill the rapidly growing global demand. 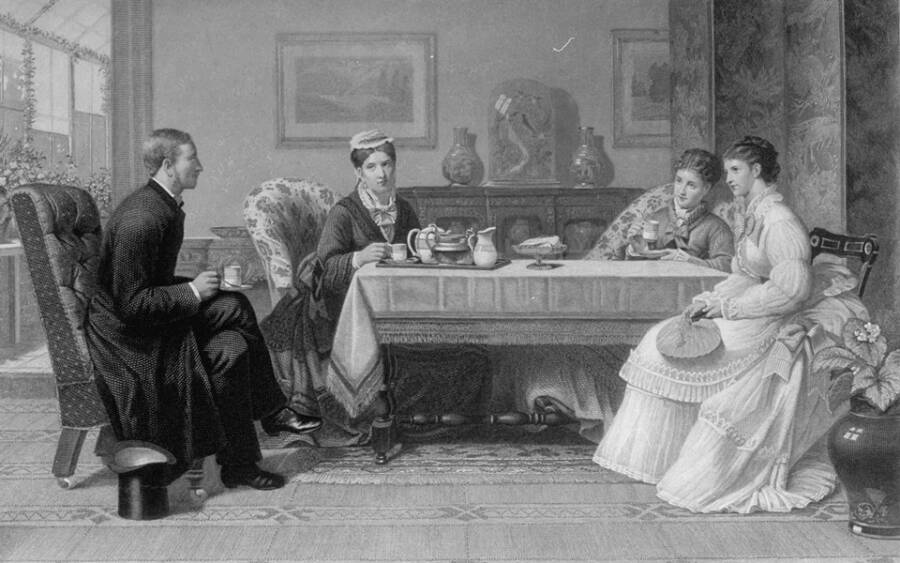 Once the tea trend invaded England, the brew became popular among Britain’s elite as the cost of tea was still too extravagant for commoners. Soon, the British began importing tea in larger quantities and the drink quickly became Britain’s most important trade item from China.

Foreign trading companies, like the East India Trading Company which represented all of Britain’s business, were still confined to Canton (now modern-day Guangzhou). Canton was the only trading post in the country accessible to foreign merchants. Despite this, China still enjoyed surpluses of trade with Western entities. 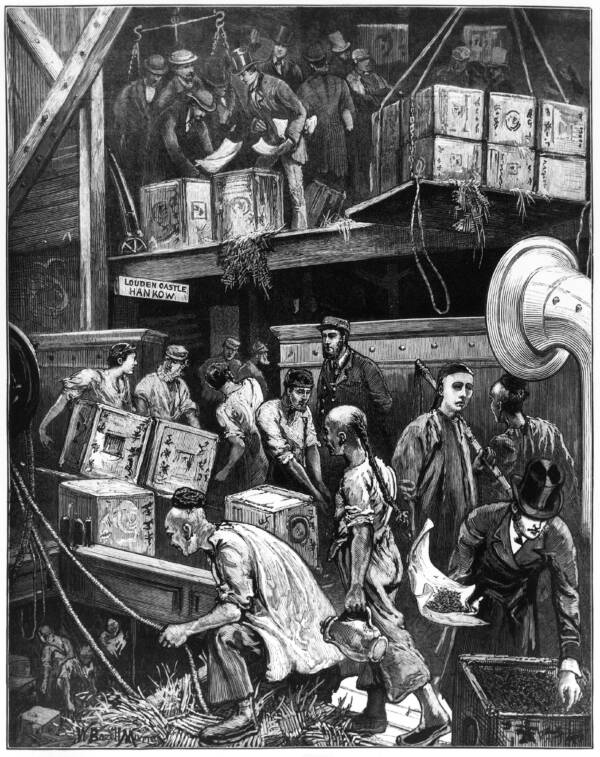 SSPL/Getty ImagesThe English word for tea comes from the Chinese “té” in the dialect of Fukien province, from which trade ships started westward on the southern sea route.

Thanks largely to its monopoly on tea production, China quickly became the world’s largest economic force of the early 19th Century. By the late 1880s, China produced roughly 250,000 tons of tea every year, 53 percent of which was exported to other parts of the world. In fact, tea accounted for 62 percent of all of China’s exports.

“Tea changed the role of China on the world stage,” said Sarah Rose, author of the book For All the Tea in China.

Not only that, but the tea trade also “gave birth to the colonial territory of Hong Kong – tea drove economic expansion of the British empire in the Far East and Britain’s economy became dependent on tea.”

Britain — which had just conquered India and began cultivating opium there, also began to purchase China’s tea, silk, and porcelain in exchange for opium which was a popular pain reliever at the time. 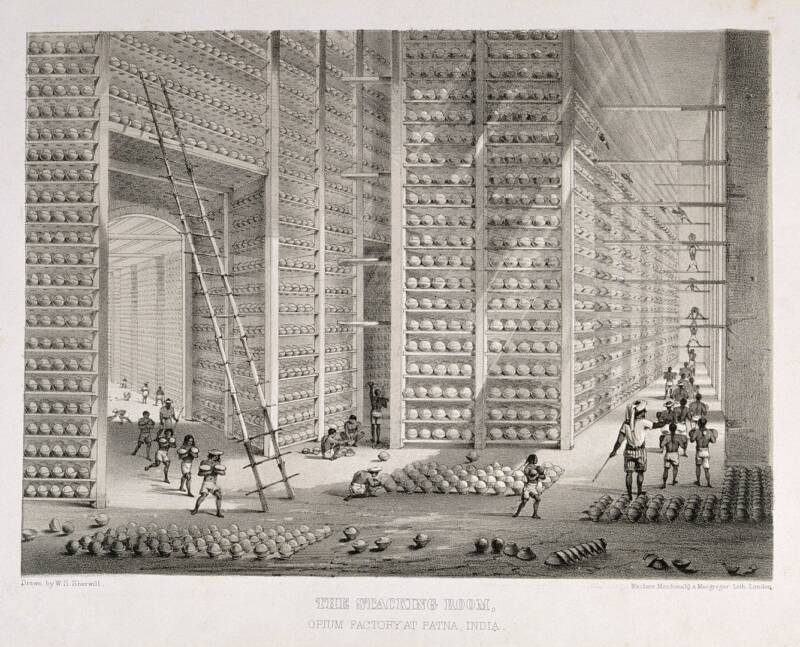 But the vast import of opium quickly created an epidemic of addiction in China and many died as a result. The Chinese emperor thus passed multiple royal decrees to ban the drug and, in 1820, began to demand that the British pay China in only silver in exchange for its tea and other goods moving forward.

Britain’s market demand both domestically and abroad for tea was so lucrative that they had no choice but to agree to the trade terms. But Britain soon fell into a trade deficit as they had to import silver from Europe and Mexico in order to keep up with the demand for tea and this burdened the country’s finances.

Even though Britain’s economy relied on its tea trade with China, the government knew that if they continued to export silver out of the country they would go broke.

So, as a means to reduce their deficit, the British quietly began smuggling opium into China in exchange for tea. This, of course, exacerbated China’s opium epidemic. 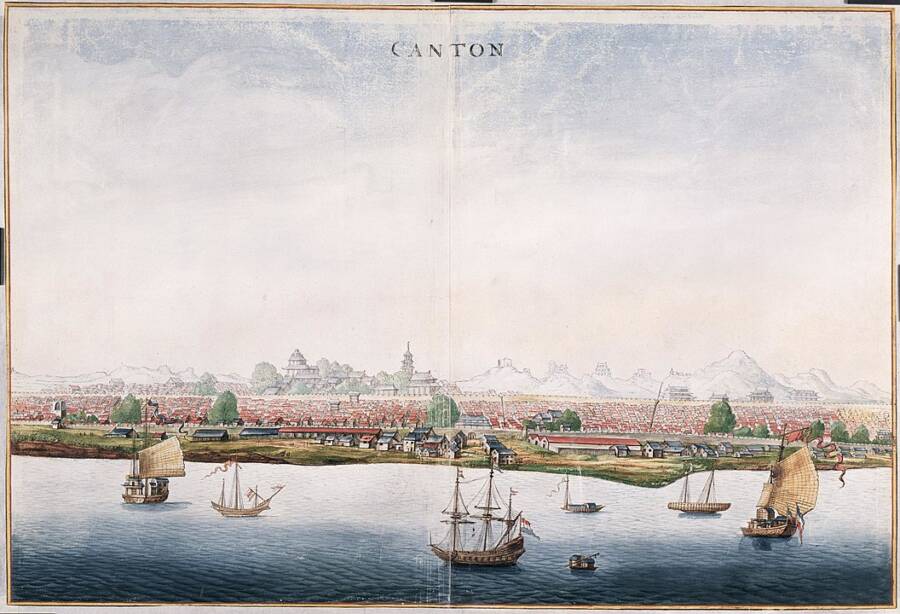 Wikimedia CommonsBritish traders at the time were confined to activity in Canton, the only Chinese trading port open to foreigners.

Out of desperation, Chinese High-Commissioner Lin Zexu sent a pleading letter to the British monarch at the time, Queen Victoria, to cease illegal exports of opium into China. His letter went ignored.

China’s unanswered requests left the emperor little choice. In April 1839, the Qing Emperor sent an army to Canton to raid the port for illegal opium, resulting in the confiscation of more than 20,000 chests (or 1,200 tons) of opium from the East India Trading Company.

The crates of drugs were burnt without legal reparations to the British government.

This kicked off the infamous Opium Wars, two separate trade wars between China and Britain that spanned over two decades beginning in 1840.

The Opium Wars would change the history of China and its influence over the tea trade forever.

Britain’s decision to wage war on a nation which had, for the most part, maintained good trade relations with them, over what was essentially drug trafficking became a source of political strife to the Parliament.

As William Gladstone, who would eventually become Britain’s fourth longest-serving prime minister, wrote in his diary at the time, “I am in dread of the judgments of God upon England for our national iniquity towards China.” 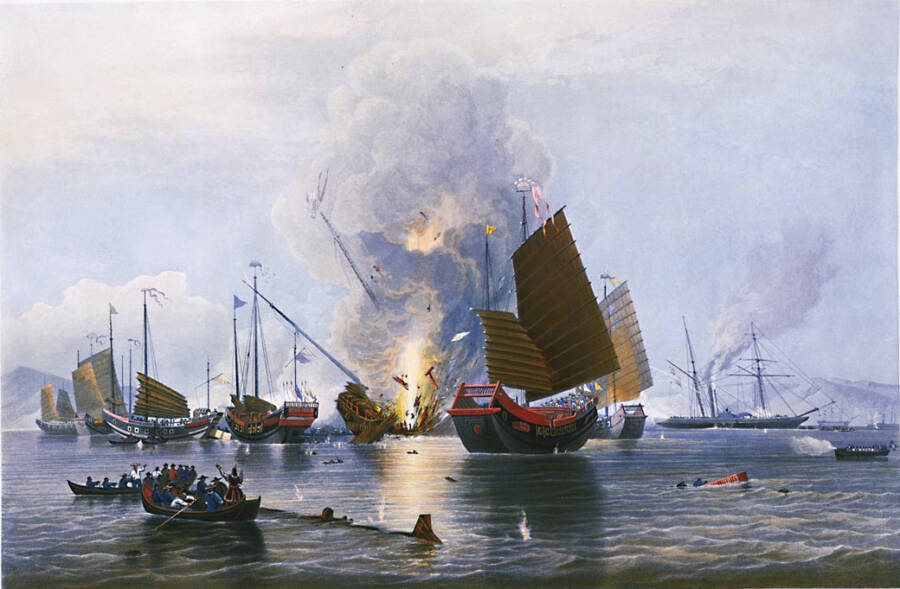 Wikimedia CommonsBritish battle ships during the first Opium War with China which had long-lasting effects on China’s economic strength.

After the first battles of the Opium Wars were waged, in 1842, the Qing dynasty signed the Treaty of Nanjing (also known as the Treaty of Nanking). This was only the first of a number of treaties that the Chinese were forced to agree to as they faced the military opposition of the British.

The Treaty of Nanjing saw that the Chinese paid the British indemnity, opened up five of their previously closed ports to foreign merchants, and ceded their island of Hong Kong to Colonial rule.

The Qing Dynasty’s subjugation to Britain’s trade demands weakened the Chinese government’s public image and set off growing unrest among Chinese merchants who were unhappy with their government’s closed trade policy.

In this respect, the Opium Wars had far-reaching consequences for China, and the era following the wars was dubbed the “Century of Humiliation.”

Amid the destruction of the diplomatic relations between Britain and China, Scottish botanist Robert Fortune was thrust into the thick of it.

As a child, Fortune spent his days with his father on their modest family farm. Coming from a poor family, Fortune attained most of his botanical knowledge through practical education instead of formal schooling.

Eventually, the poor botanist worked himself up the ranks of England’s scientific circles and landed work at the prestigious Horticultural Society of London’s garden at Chiswick. 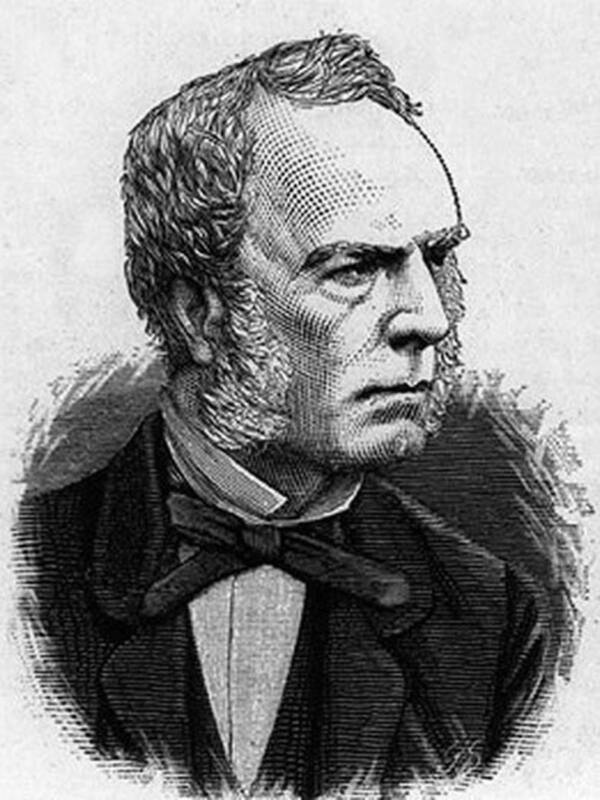 In 1842, when the First Opium War between Britain and China ended with the Treaty of Nanjing, Fortune was commissioned by the Royal Horticultural Society to undertake a three-year plant collecting expedition in China.

On his trip, Fortune encountered China’s beautiful flora and tea gardens, but he also weathered sickness and repeat attacks from pirates and bandits. He chronicled his entire journey through China in his 1847 book Three Years’ Wanderings in the Northern Provinces of China.

No Westerner had ever forayed into Chinese territory as far as Robert Fortune had, traveling even to the remote Wuyi Mountains in China’s Fujian province, one of its main tea territories. Britain’s East India Trading Company, in the middle of a war with China over the popular brew, naturally became interested in Fortune’s work.

The company believed that if Britain could access the tea seeds and plants in China and find a way to grow and harvest the tea themselves, perhaps in their tropically-inclined colony India, then the British could supersede the Chinese in the tea trade.

And so Britain commissioned Robert Fortune to steal tea from China.

It was a risky job, but for $624 per annum — which was five times Fortune’s existing salary — and the commercial rights to any plants he acquired on his smuggling trip, the scientist could hardly resist.

In 1848, Fortune embarked on his second journey to China but this time, as an undercover smuggler. In order to bypass port securities, Fortune disguised himself as a Chinese merchant by cutting his hair in the local fashion and wearing Chinese traditional garb.

But getting through security was only the beginning. Fortune also had to collect tea specimens and find a way to transport them to India. In all, Fortune successfully gathered 13,000 species of tea plants and 10,000 seeds from China’s tea provinces and managed to get them across the nation’s borders.

“He even took tea farmers with him,” said Li Xiangxi, who now runs her family’s generational tea business in China. “That way, they could study the craft of tea. They also took the farming tools [and] the tea processing tools.” 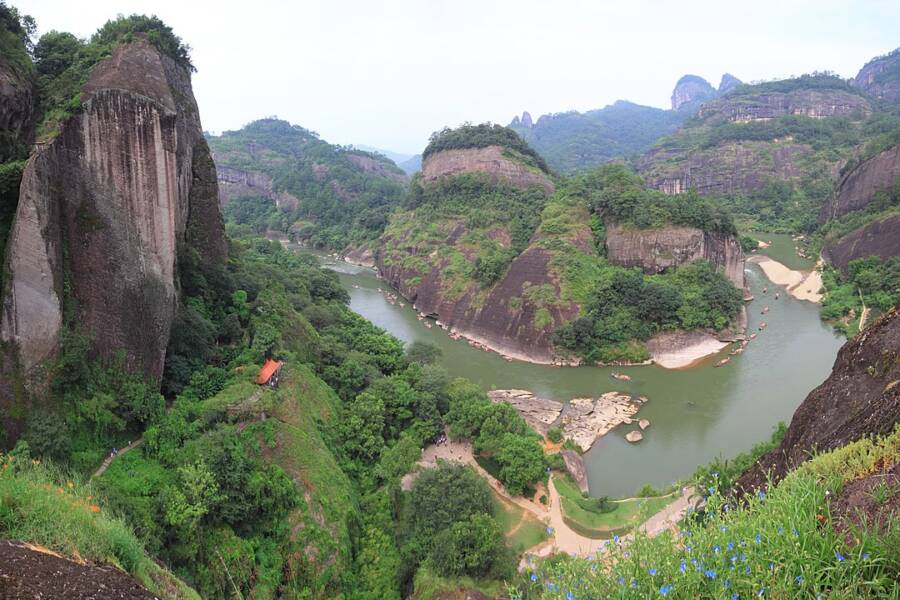 Wikimedia CommonsThe Wuyi Mountains in the Fujian province, a remote area which Fortune was able to penetrate disguised as a Chinese merchant.

On his first smuggling attempt, most of the tea seedlings died in transit. After several trials and a new method involving a special Wardian glass case to safe-keep the plants during their arduous trip overseas, Fortune would introduce 20,000 non-native tea plants to India’s Darjeeling region.

Eventually, Britain did succeed in finding a way to grow, harvest, and manufacture tea on their own in India, breaking China’s long-running monopoly on the tea trade.

The amount of tea produced in China fell significantly to 41,000 tons of which only 9,000 tons were exported.

China quickly fell behind in commerce as the Dutch and Americans followed Britain and conducted their own raids on China’s tea countries to produce their own.

The impact of Britain’s trade theft and the unfair treaties following the Opium Wars so dramatically altered China’s economy that they could not fully recover until the 1950s.

It would be 170 years before China was able to restore its status as the world’s biggest tea exporter.

Now that you’ve learned about the time the British sent Robert Fortune to steal tea from China, discover haunting photos from the forgotten Bengal Famine fueled by British colonialism. Then, meet these female gangsters who stole and killed their way into the underworld.