Aboriginal Born-Again Christians Burned Their Cultural Patrimony For Being Satanic

Since 2015, Ana Makahununiu has convinced dozens of members of an Aboriginal community that their cultural beliefs are akin to devil worship. 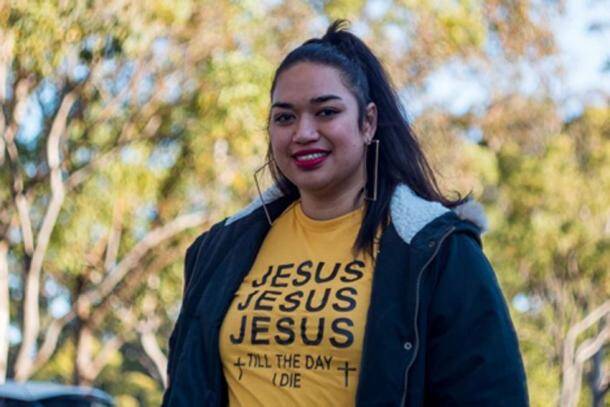 ABC News/Scott MitchellMakahanuniu arrived in Wangkatjungka in 2015. A year after that, her devotees burned “satanic” personal and cultural items once sacred to their Aboroginal heritage.

Tongan preacher Ana Makahununiu first arrived at the Aboriginal community of Wangkatjungka, in the Kimberley region of Western Australia, in 2015. Since then, the “prophetess” has baptized dozens of locals — who have then set fire to sacred indigenous artifacts that they now consider “satanic.”

Egged on by Makahununiu, the Aboriginal born-again Christians see their traditional culture as a kind of devil worship. In 2016, according to ABC News Australia, they filmed a bonfire where they burned ancestral weapons and traditional clothing.

Other Christian converts in Australia’s most remote communities are convinced they can reanimate the dead. At one funeral in 2015, a young girl’s burial was delayed for hours when a group of born-again Christians tried to wake her up with dancing, singing, and prayers.

Labor senator and Aboriginal leader Pat Dodson has criticized the movement for its vehement disrespect of other cultures and people. He called the deliberate destruction of his culture’s sacred artifacts “an act of bastardry.”

The 2016 bonfire in Wangkatjungka, footage courtesy of ABC News Australia.

“It’s about the lowest act you could perform in trying to indicate to a fellow human being that you have total disdain for anything they represent,” he said. “They are a type of virus that has really got no credibility. If they really understood the gospel then the gospel is about liberation. It’s about an accommodation of the diversity and differences that we have in our belief systems.”

While the newly converted have claimed their practices bring them joy and peace, their indifference to other people’s faiths has stoked tension in Wangkatjungka and in other indigenous communities.

One of the women who helped build the bonfire said the violence plaguing her community had been caused by the devil.

“We used to getting bashed from our partners and smoking, drinking with them, every family,” she said. “It’s just not good for the kids. It’s not the people really who are getting wild, it’s the devil behind them getting wild.”

Another woman thinks the bonfire helped her kick her smoking habit.

“I went back home and get a little bit of tobacco and a paper,” she said. “I take it back to the fire and throw it down in the fire. From that day on, I never smoke and I thank the Lord for that.”

A short video on the Wangkatjungka community.

After the personal items with negative connotations were discarded of, sacred objects were burned. One man threw a bundle of weapons that had been passed down to him over generations into the fire.

Afterward, a traditional canopy where Aboriginal leaders and young boys conducted coming-of-age rituals, was broken down pushed into the flames.

“We got my car, my Landcruiser,” said one woman. “Then we just slowly moved it, all the bits and pieces, like tin everything, like poles.”

All of it was burned.

Makahununiu claimed she didn’t order her followers to burn these items, but she did support their decision to rid their community of evil.

“My focus was for the people who [were] addicted to drugs or alcohol, cigarettes, all those things,” she said. “Most of them, they was shouting and happy. It was really exciting for them. The most important thing for me is to see the people happy and free not to live in bondage anymore.” 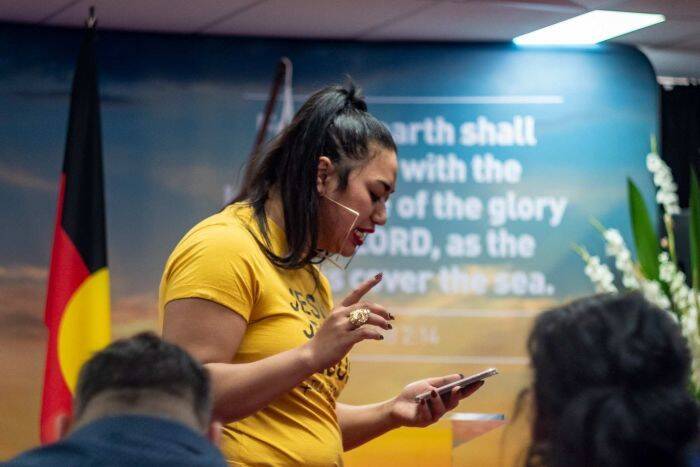 ABC News/Scott MitchellMakahununiu isn’t legally allowed to work in Australia due to her visa status, but preaches at a Pentecostal church in Sydney and works for cash.

Makahununiu is not legally allowed to work in Australia, and so her followers pooled their funds so she could stay in Wangkatjungka for about three years. She lives in Sydney now, preaching at a Pentecostal church and working jobs that pay cash.

To her, Aboriginal beliefs are akin to devil worship.

“When they talk, and share the type of spirit they’re using, I can say is very demonic,” she said. “I’ve been seeing that is all connected to witchcraft — that is not from God, that’s all from the devil.”

Makahununiu intends to return to Kimberley soon — this time with a group missionaries.

“We are planning to rise up again and we’re going to travel to Wangkatjungka, and then I believe this will be a time we’re going to bring everybody all together,” she said.

Everybody who believes what she preaches, that is.

After learning about the Christian “prophetess” who converted dozens of Aboriginals that have burned sacred cultural items, read about seven bizarrely interesting cultural practices still carried out today. Then, learn about the Iraqi man who hugged an ISIS bomber and saved dozens of lives.