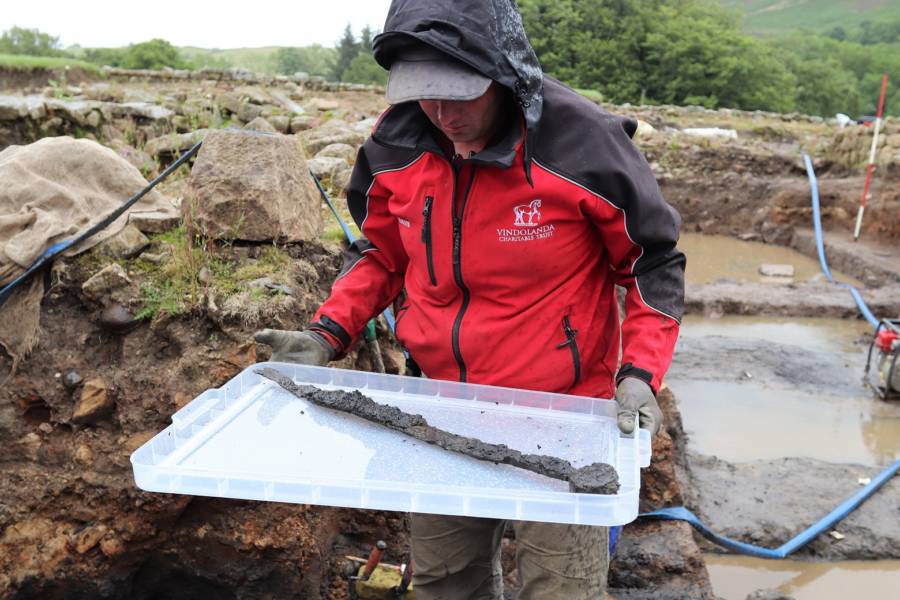 “You can work as an archaeologist your entire life on Roman military sites and, even at Vindolanda, we never expect or imagine to see such a rare and special object as (the swords),” archaeologist Dr. Andrew Birley told the Vindolanda Trust. “It felt like the team had won a form of an archaeological lottery.”

The swords were uncovered during an excavation of a Roman cavalry barrack at Vindolanda. The first sword, which was discovered in a living room by volunteer Rupert Bainbridge, had a bent tip, which, according to the Vindolanda Trust, is the “ancient equivalent of a modern soldier abandoning a malfunctioning rifle.” The second sword was found a few weeks later in a neighboring room, with its blade intact but without a handle, pommel, or scabbard.

“You don’t expect to have this kind of experience twice in one month so this was both a delightful moment and a historical puzzle,” Dr. Birley said. “You can imagine the circumstances where you could conceive leaving one sword behind rare as it is… but two?”

One theory put forth by the Vindolanda Trust is that the sword was left behind when the garrison was forced to abandon the barrack in a hurry.

As for the two toy swords, they were discovered together in another room, and are said to be “almost exactly the same as those that can be purchased by tourists visiting the Roman wall today.”

The findings are set to go on display in Vindolanda Museum sometime in the fall.

Other items were found in the barrack as well, including knives and arrowheads, plus less militaristic items such as leather shoes. All of the findings are believed to be from approximately 120 A.D., when the fort was thought to house around 1,000 people.

According to Vindolanda’s official website, the fort was built before Hadrian’s Wall itself, sometime in the 70s A.D., but later became an important base of support after the wall was built. It remained in use throughout the Roman occupation of Britain and for a few centuries after, before finally being abandoned in the ninth century.

Excavations at the site are ongoing and continue to shed light on life in Roman Britain.

Next, check out these photos of a newly opened 3,500-year-old Egyptian tomb. Then, read up on the newly unearthed Viking warrior who turned out to be a woman.