Held in Kinshasa, Zaire in 1974, the Rumble in the Jungle saw Muhammad Ali challenge George Foreman for the world heavyweight title that had been stripped from him seven years earlier. 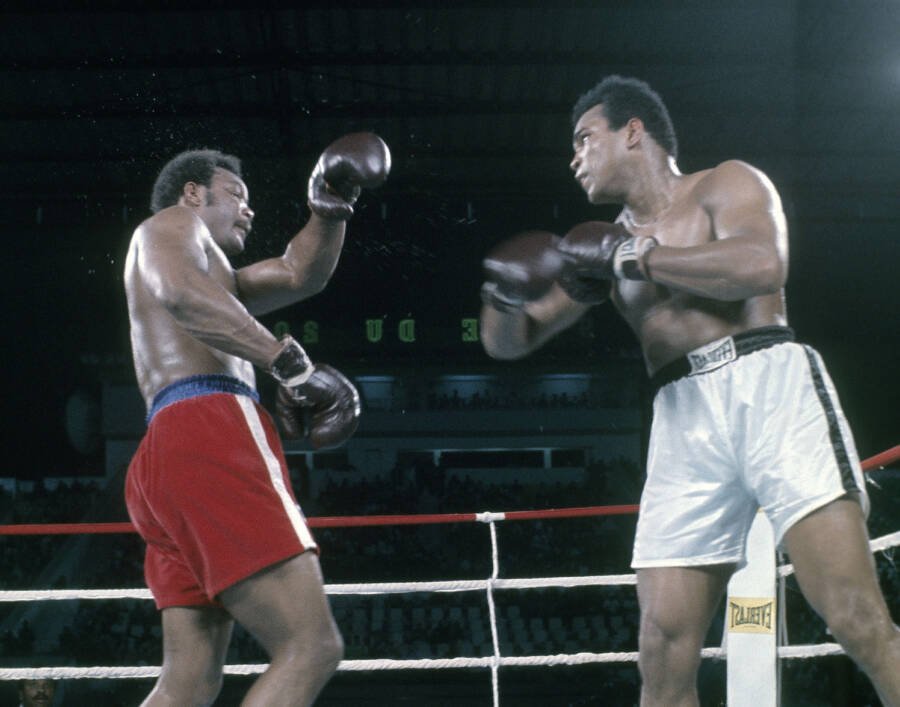 Focus On Sport/Getty ImagesMuhammad Ali took down George Foreman in just eight rounds during the Rumble In The Jungle.

In 1974, the Rumble in the Jungle world championship heavyweight fight between Muhammad Ali and George Foreman was to be an event like no other. Foreman had recently won the heavyweight title from Joe Frasier, and Ali had had his stripped in the 1960s for his anti-war activism and was barred from fighting from 1967 to 1970.

It took Ali years to work his way back up to be in a position to challenge Foreman, the undisputed champion. And he was 32 years old, going up against the 25-year-old Foreman, who was favored to win by four-to-one odds.

But even though it was fronted by the most famous figures in boxing, there was no guarantee that the Rumble in the Jungle would become the spectacle of the century. It was organized as a partnership between promoter Don King, professional boxing’s most flamboyant and suspicious public face, and Zaire’s Mobutu Sese Seko, one of Africa’s most brutal and long-lived dictators, who wanted to prove himself on the world stage.

So the Rumble in the Jungle was funded by a series of shady backroom deals amid rumors of referee payoffs. Yet those deals worked to make Ali vs. Foreman happen. And the match would be broadcast across the world to reach an unprecedented number of viewers — and make Muhammad Ali a world champion once again.

How Don King Planned The Rumble In The Jungle 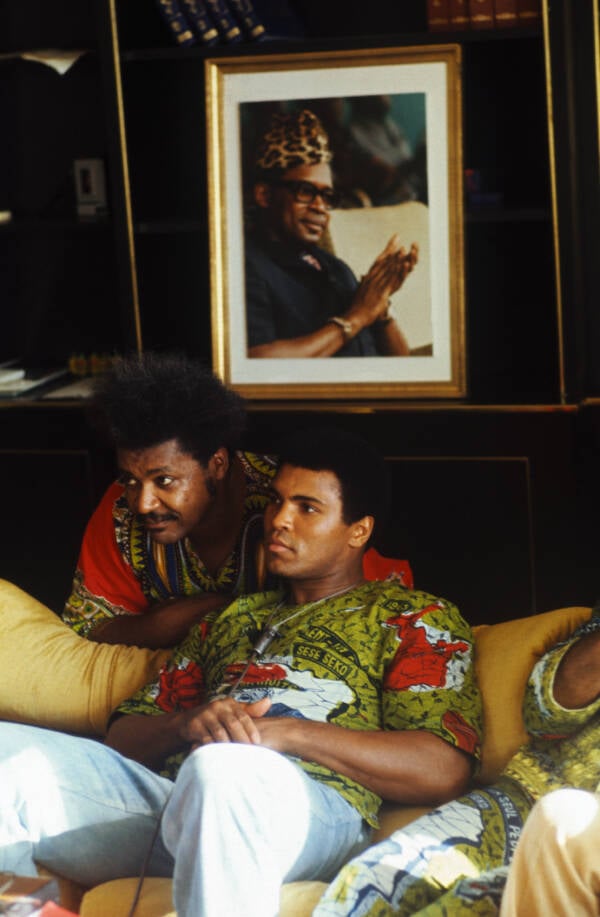 Bettmann/Getty ImagesFlamboyant promoter Don King was Muhammad Ali’s ticket back to the championship just as Ali was King’s ticket into the high-stakes world of boxing.

The Rumble in the Jungle was the brainchild of now-infamous promoter Don King. In 1974, King was only a few years out of prison after stomping a man to death in a dispute over money. He quickly got into boxing as a promoter, and mere months after his release, he met Muhammad Ali and convinced him to appear at a charity fight in Cleveland, Ohio. It was the beginning of a long and turbulent partnership.

Ali’s career had suffered when he’d very publicly refused to register for the draft in 1966, citing his Muslim faith and his opposition to the war in Vietnam. His decision had won him acclaim among Black Americans and anti-war activists, but he’d been stripped of the heavyweight championship.

By 1974, George Foreman, on the other hand, was a relative newcomer to boxing, having turned professional in 1969 and knocking reigning champion Joe Frazier, who’d won the title from Ali in 1971, out of the top spot in 1973. That year, King got both men to agree to a match.

Ali agreed to do it to bolster Black pride at home and abroad. Foreman agreed when King promised him a German shepherd. But even with two of the most prominent boxers in the world in his pocket, King couldn’t get funding or a venue for the Ali vs. Foreman fight. That’s when he got a call from Zaire.

Why The Ali Vs. Foreman Fight Happened In Zaire 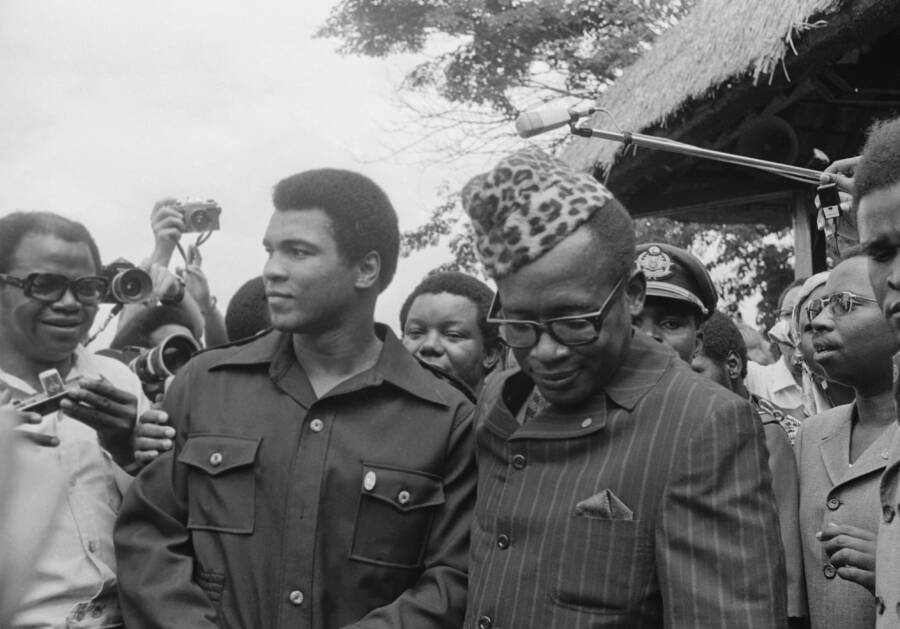 Bettmann/Getty ImagesAli meeting with President Mobutu in the gardens of his palace. Ali was heavily favored by the Zairian public due to his outspoken opposition to the United States’ foreign policy.

The man who solved King’s problem to find a location for what would become the Rumble in the Jungle was called Fred Weymar, a former American Nazi and member of the German American Bund who had been banned from the United States.

Weymar told Schwartz that Mobutu wanted “the world to consider him a major leader and an icon for all of Africa.” After almost 14 years in power, the dictator had so badly damaged the country’s economy and public image that he hoped to spark an interest in tourism and revitalize Zaire’s international reputation with a historic sporting event.

Ali and Foreman would each receive almost $5 million (over $28 million in 2022) simply for appearing. Forty-two percent of the proceeds from ticket sales for the Rumble in the Jungle would go directly into Mobutu’s pocket.

King and Schwartz expected to generate a profit of at least $20 million ($113 million in 2022). Much of it would come from broadcasting the match over pay-per-view on televisions and in theaters, the signal carried by the emerging global satellite network.

King was so confident of success that he claimed that “more people will see Foreman and Ali mix styles than any previous sporting event in history,” and that a “total audience at more than a billion people is not a gross exaggeration.” 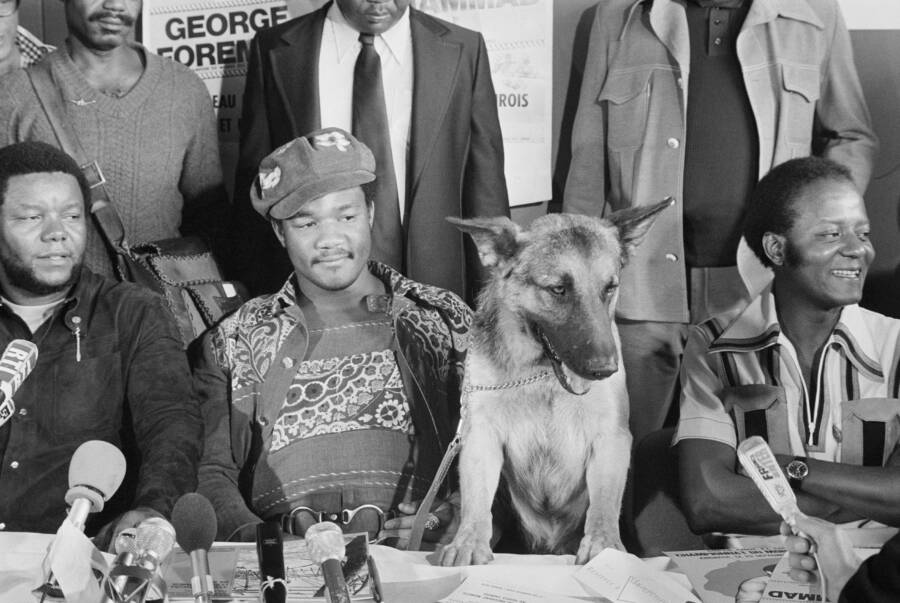 Bettmann/Getty ImagesThe presence of Digo, the dog given to George Foreman by Don King, worked against the champion as German shepherds were seen by many Zairians as a symbol of colonial rule.

Since converting to Islam, Muhammad Ali had become a vocal advocate of civil rights and Black power. And Ali vs. Foreman would be no different.

During one of many trips to Africa and the Middle East, he’d met Zaire’s President Mobutu in Abu Dhabi and told him, “My ancestors lived in Zaire… I want to regain the title that was stolen from me. This will be the greatest spectacle of modern times. I want to offer it to Africa.”

Don King seized on the prideful angle. The match would be the centerpiece of an extravagant event he characterized on promotional posters as “From Slave Ship to Championship.” Preceding the fight would be a three-day music festival, Zaire 74, headlined by acts like Bill Withers, B.B. King, and James Brown.

As the former champion, Ali was considered the underdog in the Rumble in the Jungle. But from the moment he set foot in Zaire’s capital city, Kinshasa, he set about identifying with the people. The fight was Ali vs. Foreman in more ways than just boxing.

He called George Foreman “a white Belgian” and “a stranger coming to my home to fight me.” It didn’t help that Foreman had a belligerent manner and was accompanied by his German shepherd, an animal that reminded many Zairians of the colonial rule that had ended only 14 years earlier.

“I wanted to establish a relationship between American blacks and Africans,” Ali wrote in 1999. “The fight was about racial problems, Vietnam. All of that.”

Zairians responded to him rapturously. Everywhere he went in Kinshasa, accompanied by his enormous entourage, he was greeted with shouts of “Ali, bomaye!” — Ali, kill him! 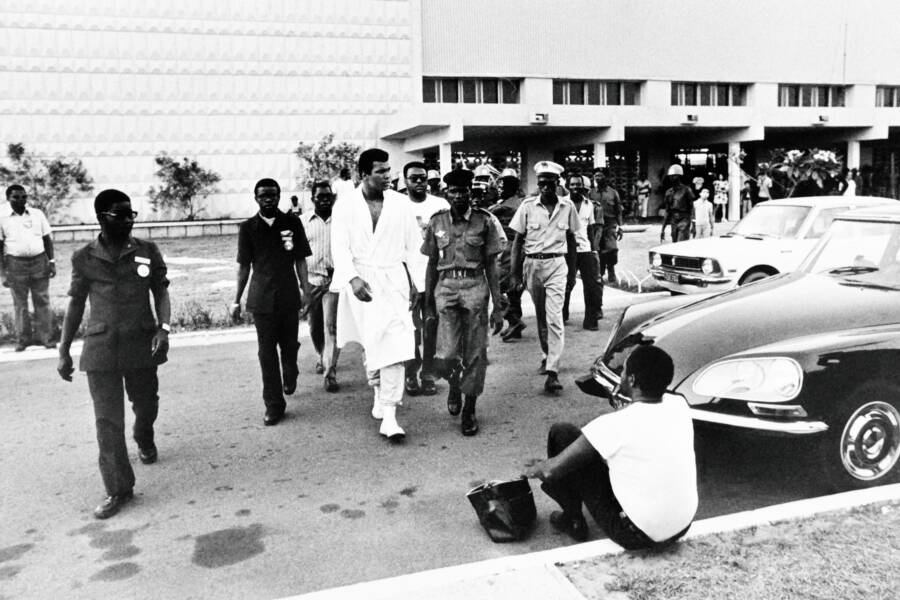 AFP/Getty ImagesAli was given a luxurious suite of rooms for his entourage and to train in. On tours throughout Kinshasa, he was greeted enthusiastically by Zairians who accepted him as one of their own.

When a training accident left Foreman with a severe cut over his right eye, doubts arose over whether the fight would go ahead and whether Mobutu’s regime could pull off an event of the size planned. Mobutu prevented Foreman from leaving the country for medical attention, and his soldiers harassed journalists eager to get the story out.

Zaire 74 went ahead as scheduled, but five more weeks passed before both boxers were ready for the Ali vs. Foreman fight.

Finally, weeks overdue and well into the rainy season, the postponed hour of the Rumble in the Jungle arrived on October 30, 1974. Before a crowd of 60,000 spectators, the fighters met at 4:00 in the morning to coincide with prime-time in the United States, where audiences would pick up the coverage by satellite transmission. 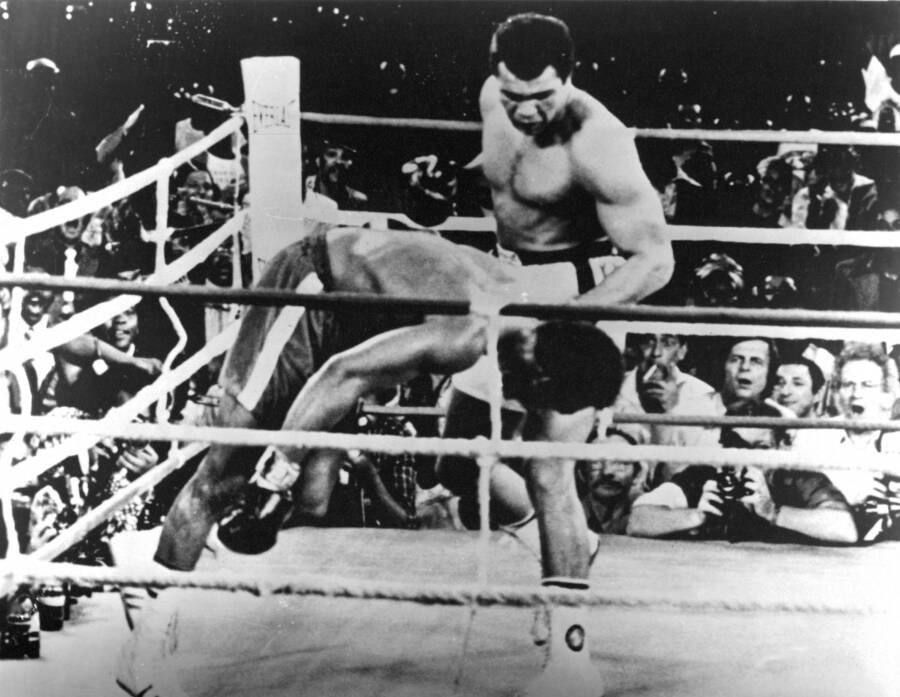 The Ring Magazine/Getty ImagesIn the eighth round of their fight, Ali delivered two solid punches which knocked Foreman down to the mat, a humiliation he’d never experienced in his career.

For the first few rounds, Ali employed his novel and now celebrated “rope-a-dope” technique, allowing himself to be battered back against the ropes around the ring and fooling Foreman into thinking he had the upper hand.

By deflecting the younger champ’s savage blows, however, Ali sapped his opponent’s strength for seven rounds. Then, with seconds left in the eighth round, “like a bee harassing a bear,” he sprang off the ropes and delivered a rapid succession of punches which dropped Foreman to the mat.

Ali had regained the championship in the most dramatic fashion possible.

The Faded Legacy Of The Rumble In The Jungle 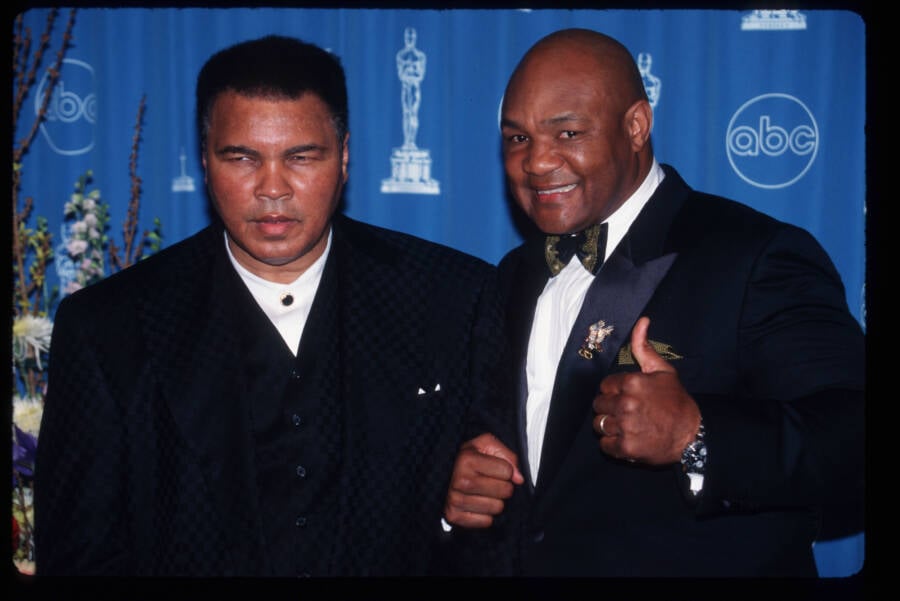 Russell Einhorn/Getty ImagesIn later years, Foreman and Ali reconciled and became friends, with Foreman declaring that “I am not closer to anyone else in this life than I am to Muhammad Ali.”

Foreman struggled to accept his loss and entered a period of depression. Retiring in 1977, he became a Christian minister before making an unprecedented comeback in 1994, becoming the oldest man ever to win the heavyweight championship at age 46.

Ali went on to participate in the equally legendary Thrilla in Manila in 1975, once again defeating Joe Frazier. He too would retire several times, finally in 1981 as he struggled with Parkinson’s disease, to which he eventually succumbed in 2016.

Don King continued to promote leading sports figures and entertainers, including Evander Holyfield and Mike Tyson. Many of his clients have accused him of routinely cheating them out of millions of dollars. But the Ali vs. Foreman fight in Zaire was his peak.

The real loser of the Rumble in the Jungle was Zaire. Although President Mobutu Sese Seko reaped a fortune from the fight, it had been funded with public money, leaving the cash-strapped African nation even poorer than it had been before the event.

By the late 1970s, economic mismanagement and political dissent led Mobutu to abandon his anticolonial image and rely increasingly on support from the United States to stay in power.

Over the following two decades, infrastructure and the economy ground to a halt, and the standard of living plunged ever lower. Even as an Academy Award-winning documentary about the fight, When We Were Kings</em, was released in 1996, restoring Foreman's and Ali's reputations, rebels were finishing off Mobutu's crumbling regime, and he was forced to flee the country.

On May 21, 1997, the country was restored to its former name as the Democratic Republic of the Congo, and Mobutu died in Rabat, Morocco, later that year.

After learning about the career-defining Ali vs. Foreman Rumble in the Jungle, take a look at these fascinating facts about Muhammad Ali. Then, find out more about the disturbing powers behind the life and downfall of Patrice Lumumba, the fearless Congolese leader ruthlessly wiped out by Mobutu Sese Seko in his quest for absolute power.