When Was The Constitution Written? Inside The Messy History Of America’s Most Famous Living Document

The U.S. Constitution was written over a four-month period during the Constitutional Convention of 1787 — but it was far from finished when it was signed that September.

The easy answer to the question of when the Constitution was written is 1787. After all, that’s when the historic Constitutional Convention took place. But the truth is that the document took much longer than that to complete — and it’s arguably still being written to this day.

The U.S. Constitution is considered a “living document,” meaning that it can be edited. And since its ratification in 1788, the document has undergone a number of changes. Some of the most famous amendments protect people’s rights to free speech, to bear arms, and to vote.

And while it’s certainly possible that the document will continue to evolve, the story of the U.S. Constitution undoubtedly began in the 18th century.

When Was The Original Constitution Written?

By 1787, the newly formed United States had reached a fateful crossroads. Ever since the American Revolutionary War ended in 1783, the country had struggled to function under its weak Articles of Confederation. Congress had the authority to make treaties and alliances, maintain a military, and declare war, but it lacked the ability to levy taxes and regulate commerce.

An uprising among farmers in 1786 called Shays’ Rebellion — which the government barely managed to suppress — convinced many that something had to be done. If the United States were to survive as a country, then its system of government would need a serious adjustment.

Founding Father James Madison agreed. Having “formed in my mind some outlines of a new system,” he wrote to George Washington, “I take the liberty of submitting them without apology, to your eye.” 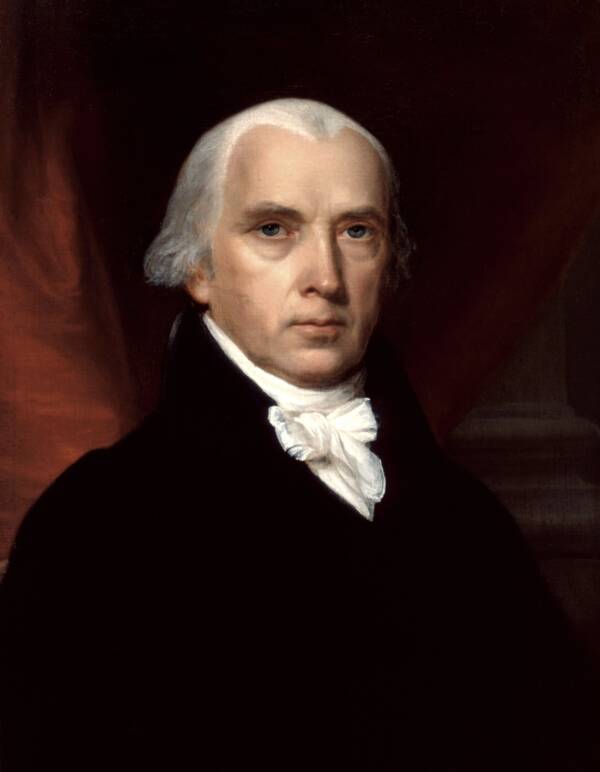 The White House Historical AssociationJames Madison is often called the “Father of the Constitution,” but he called it “the work of many heads.”

Delegates from 12 of the original 13 states — Rhode Island refused to join the convention — gathered in Philadelphia in May 1787 to rework the Articles of Confederation. But even though their official goal was to reform what existed, they ended up creating a new form of government.

“The Eyes of the United States are turned upon this Assembly and their Expectations raised to a very anxious Degree,” Virginia state delegate George Mason wrote to his son. “May God Grant that we may be able to gratify them, by establishing a wise and just Government.”

Of the 74 delegates who were invited to the Constitutional Convention, just 55 showed up — and only about 30 of them stayed for the whole thing. And yet, all participants played a role in creating the document.

Inside The Four-Month Constitutional Convention

Over the next four months, the delegates toiled. They clashed over ideas of representation, slavery, and the government itself. Delegates argued about what the new government should look like and how powerful it should be.

Slowly, they began to form a document. They decided to design a government with an executive branch (the presidency), a judicial branch (the Supreme Court), and a legislative branch (Congress).

But they had a harder time deciding on matters of representation. The smaller states wanted each state to have equal representation, while the bigger states desired population-based representation. As they argued, one delegate wrote despairingly that the Constitutional Convention “was on the verge of dissolution, scarce held together by the strength of an hair.”

After much debate on whether to include enslaved people in these population counts, the delegates decided that each slave would be counted as three-fifths of a person, in the “three-fifths compromise.” 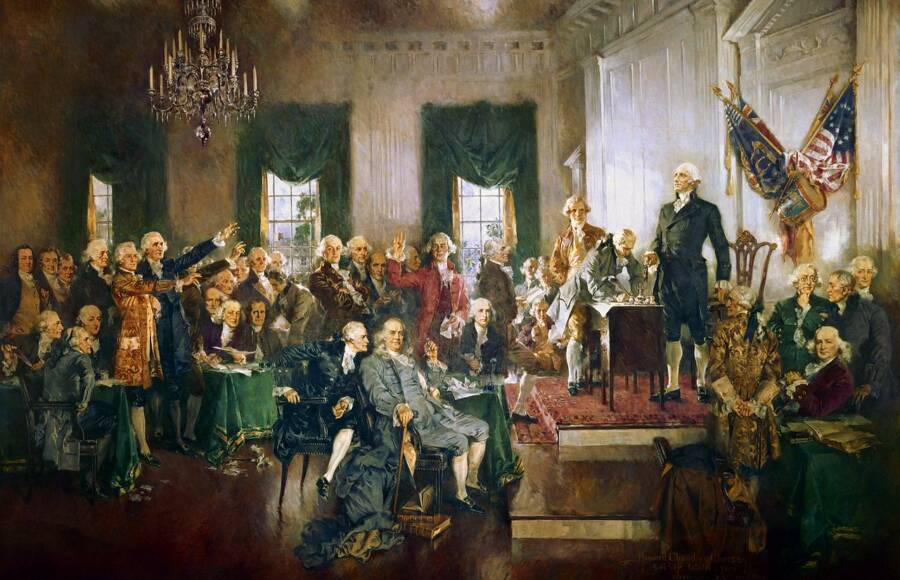 Public DomainA depiction of the Constitutional Convention, with George Washington overseeing the gathering.

But slavery remained a contentious issue. As Georgia, North Carolina, and South Carolina threatened to leave if the practice was outlawed, many leaders denounced slavery as repugnant. And at this point, 10 states had outlawed the importation of new slaves. So the delegates reached another compromise: Congress could ban the slave trade, but not until 1808.

“I think it will astonish our enemies, who are waiting with confidence to hear that our councils are confounded like those of the Builders of Babel; and that our States are on the point of separation, only to meet hereafter for the purpose of cutting one another’s throats.”

But he’d simplified matters. Though the Constitution was written, it still had a long way to go. The clerk who handwrote the document had been given just two days to put pen to parchment. So he made mistakes in the final draft — which were noted in an “errata” section. And before long, the document would face fresh scrutiny and debate from the states.

Ratification And The Bill Of Rights

With the Constitution written (James Madison is considered the primary author of the document, though its authorship is complicated), it was time for its believers to get to work. As the new Constitution bounced from state to state, it met both enthusiastic support and fierce opposition. And Mason’s point about a Bill of Rights had resounded across the nation.

Even Thomas Jefferson, then Minister to France, wrote Madison about his belief that the Constitution needed a Bill of Rights in December 1787.

“I will now add what I do not like,” Jefferson said of the Constitution. “First the omission of a bill of rights…” 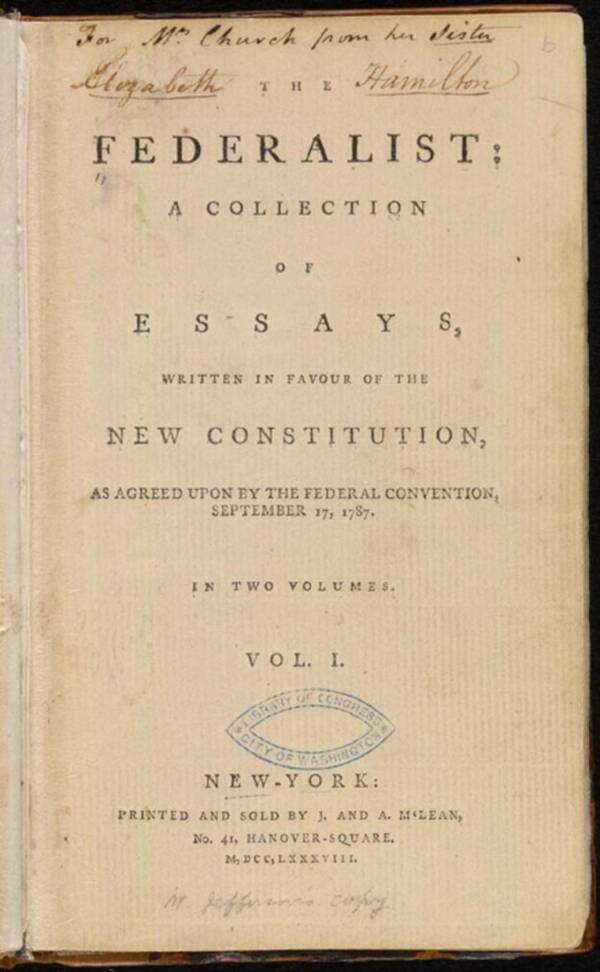 Virginia, New York, and North Carolina ratified it in the months after, with Rhode Island holding out until May 29, 1790, due to disagreements about slavery and the federal control of currency. The state finally ratified it after the U.S. government threatened to cease commercial relations.

Despite the holdouts, once the Constitution had been ratified by nine states, it was agreed that the new government would begin on March 4, 1789. So James Madison soon introduced a list of amendments. The Bill of Rights, he told the House of Representatives on June 8, 1789, would “expressly declare the great rights of mankind secured under this constitution.”

He then worked tirelessly to gain his colleagues’ support.

In the end, the House and Senate narrowed down Madison’s 19 proposed amendments to 12. The amendments then went to the states, which ratified 10 of them by December 15, 1791. These 10 amendments make up what we call the Bill of Rights today. They include freedom of the press, the right to bear arms, the right to peaceably assemble, and more.

And, since then, 17 more amendments have been added.

Why The Constitution Is Still Being Written Today

It’s not easy to amend the Constitution. Though more than 11,000 amendments have been proposed, just 27 have been ratified in total. That’s because two-thirds of Congress and three-fourths of the state legislatures must agree to do so — and that rarely happens.

However, over the past two centuries, 17 crucial amendments have been added. They’ve banned slavery, established birth-right citizenship, given women the right to vote, and more. Often, it takes time and persistence for important amendments like these to get approved. 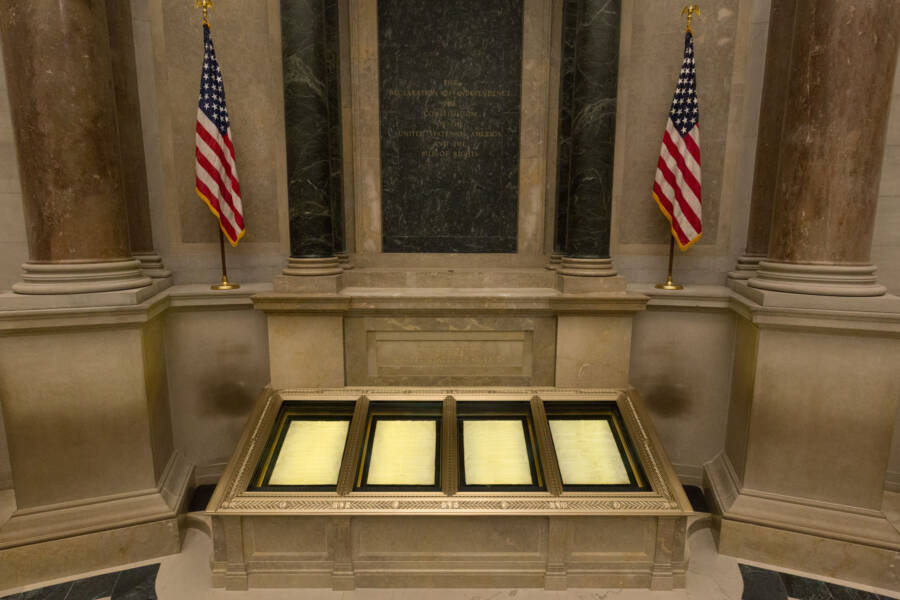 National ArchivesThe Declaration of Independence, the Constitution, and the Bill of Rights on display in Washington, D.C.

Of course, you could technically say that the Constitution was written in 1787. But that ignores the Bill of Rights and the hard-fought amendments that came years later. It also ignores how much the country has changed and evolved since then to become a more accepting and just nation.

In fact, even the original framers and strongest supporters thought that the Constitution could be improved. Madison himself often mused about the imperfection of his famous creation. But he decided “that which is the least imperfect is therefore the best government.”

As the “imperfect union” of the United States strides forward, the American Constitution remains a living document that can be changed. And that’s why its story is still in progress today.

After learning about when the Constitution was written, take a look at these fascinating facts about George Washington. Then, read about these shocking acts committed by America’s founding fathers.